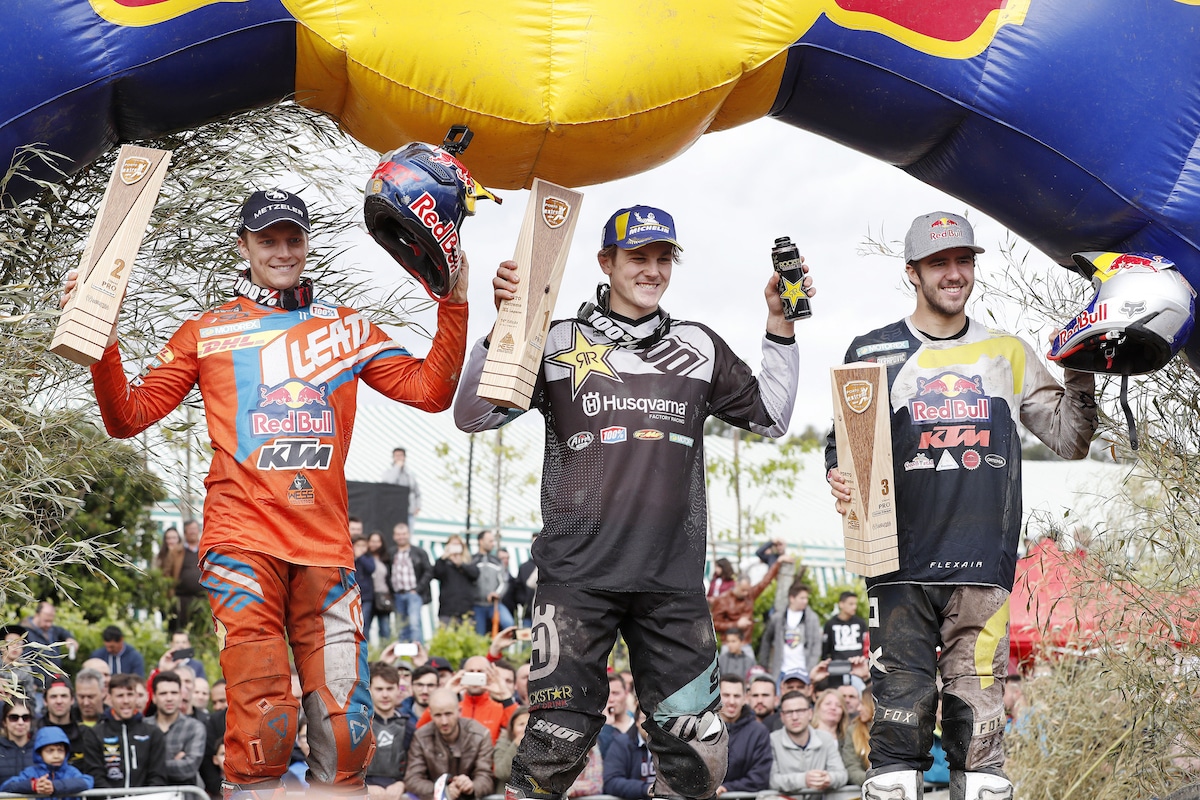 Britain’s Billy Bolt has claimed victory at the opening round of the inaugural World Enduro Super Series – the Extreme XL Lagares in Portugal. Securing the top step of the podium the Rockstar Energy Husqvarna Factory Racing rider takes an early lead in this year’s search for the ULTIMATE ENDURO CHAMPION.

In what was a thrilling and at times unpredictable battle, Bolt was followed home by Red Bull KTM Factory Racing’s Jonny Walker (GB) in second with Germany’s Manuel Lettenbichler (KTM) completing the podium in third.

Following two days of intense qualification action from Friday’s Endurocross and Saturday’s Urban Prologue, 252 competitors from 20 nations took to the start of Sunday’s Main Race. With Pro riders facing two laps and all other classes one lap, a tough day of riding in slippery, rocky riverbeds, high-speed forestry trails and technical climbs awaited all.

Starting in 15-second intervals, top qualifier Walker was the first rider flagged away, followed by Cody Webb (KTM – USA) and Bolt. Despite facing the tough task of opening the course, Walker quickly settled into a fast rythym, setting the pace up front. Behind him Bolt reeled in and passed Webb as the duo tackled the opening stages of the race.

With a significant hurdle to overcome, Poland’s Taddy Blazusiak (KTM) was one of the later riders to start the race due to a poor qualification result. Working his way through traffic at a considerable rate, the Polish star fought his way from outside the top 40 on lap one to become a possible race winner – on corrected time – as riders began lap two.

For Walker, a clean refueling stop saw him begin the second lap with a six-minute advantage over his closest rival Bolt. Further back Lettenbichler, Webb and Graham Jarvis (Husqvarna – GB) were engaged in a tight battle for a place inside the top five. Struggling to overtake some of the Hobby riders ahead of him on the course, Walker saw his race lead diminish as Bolt upped his pace. With one-quarter of a lap to go the Husqvarna rider took control of the race lead and charged his way into the finishing arena to take the chequered flag, ahead of Walker.

However, with Blazusiak challenging for the win on corrected time Bolt faced a nervous wait for the KTM rider to arrive. But Blazusiak wasn’t able to finish on the podium as Bolt secured the win and the opening victory in the 2018 World Enduro Super Series. Despite his best efforts, Blazusiak had to settle for fourth, with Jarvis rounding out the top five.

Billy Bolt (Husqvarna – GB): “I’m so happy to win round one of WESS at Extreme XL Lagares. There were some tense times at the end when I was waiting for the results but it’s a great feeling to stand on the top step of the podium. I started third today and tried to find a comfortable pace early on. The riverbeds were incredibly slippery but I just took the course as it was and remained focused on a long race ahead of me. On the second lap I pushed on and worked the back-markers to my advantage and caught Jonny as a result. Winning the opening round of WESS is fantastic and with just three weeks to go until round two at Erzbergrodeo Red Bull Hare Scramble I’m excited to keep this momentum rolling in Austria.”

Jonny Walker (KTM – GB): “It’s really good to get onto the WESS podium with second. Of course, I’d loved to have won, but Billy just had that extra bit of pace towards the end. My opening lap was great and I managed to build a six-minute advantage over everyone. But as the first rider on the course that played against me on lap two when I had a lot of traffic to deal with. But I guess that’s how it goes sometimes. It’s nice to have round one in the bag and I know based on my speed today I can be a contender at the Erzbergrodeo Red Bull Hare Scramble.”

Manuel Lettenbichler (KTM – Germany): “I’m so happy with my result today. I was riding strong all weekend and coming into the main race I knew I could produce a surprise result, so to finish third at round one of WESS is amazing. It’s honestly the biggest result of my career to date. This gives me a lot of confidence now for the rest of the championship and I’m determined to continue showing what I’m capable of.”