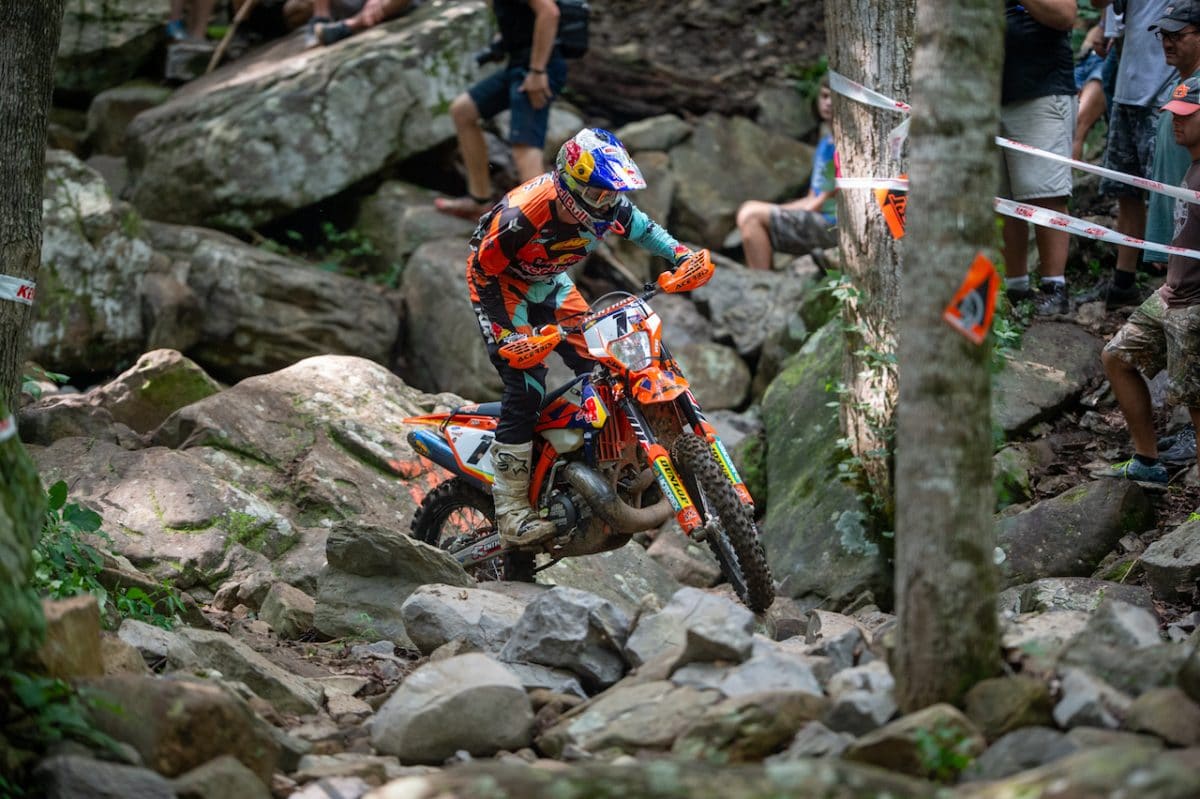 The Sunday morning program started with a Hot Lap on a mile long “short course” and Webb started the day off with a 4:33 lap to earn the first starting position for the next Knockout round. Wade Young, the 2018 Red Bull Romaniacs winner, set the second fastest time at 4:43. Lettenbichler got off to a good start with the third fastest time at 5:12. Roman had the fourth fastest time at 5:26. Husqvarna’s Colton Haaker was rounded the time five with a 6:06 lap.

The second round sent the riders out on a fourteen-mile loop in thirty second intervals, based on the hot lap times. Young and Lettenbichler erased their gaps to Webb and the three riders battled closely for several miles before Young finally opened the gap in the last few miles. Young set the fastest time at 1:08:54. Lettenbichler was second fastest at 1:09:30 and Webb was third at 1:10:20. Roman set the fourth fastest time at 1:15:47 and Austria’s Lars Enockl was fifth at 1:19:57. Only the fastest twenty-six riders moved on to round three and the remaining riders were knocked out of the competition.

Round three switched from the riders racing the track against the clock to a multi-rider head-to-head format. The fastest twenty-five riders were split into five groups of five and a 26th rider was added to group six as the LCQ alternate. The straight-line LCQ competition was not held due to race one taking longer than expected due to the difficult course. Haaker, Lettenbichler, Webb, Roman and Enockl won their respective groups to earn front row starting positions. The second and third place finishers in each group also moved on to the fifteen-rider main event.

The main event moved back to the short course and would be a 30-minute plus one lap battle, which ended up taking 41 minutes and 31 seconds for Webb to complete. Haaker jumped into the lead off the start and led the field into the woods and held that spot until he struggled to make it up a tough climb exiting the water fall that would prove to be one of the most challenging obstacles for all the riders. Webb capitalized on Haaker’s mistake to take the lead and quickly opened a small gap on the field. Roman and Young were not far behind as they completed the first lap while Haaker and Lettenbichler were another 20 plus seconds back in fourth and fifth. On lap two, Young and Haaker struggled again on the same hill allowing Lettenbichler to pass both of them and Young also passed Haaker in the melee.

The top five remained the same for several laps with Roman closing in on Webb. At the halfway point, Roman began to fall back from Webb and Lettenbichler ended up passing him for second on lap five of seven. This ended up setting the final top five results, with Webb finishing 1:28 ahead of Lettenbichler. Roman was 2:15 behind the leader and Young ended up finishing fourth, 5:17 back. Haaker went a lap down on the final lap but held fifth.