The fight for victory at round four of the World Enduro Super Series heats up as Sherco Factory Racing’s Wade Young claims the win on Off Road Day 2 at Red Bull Romaniacs.

The battle for top honours in this year’s Red Bull Romaniacs continues to be a three-way affair as Young (RSA), Manuel Lettenbichler (KTM – GER) and Red Bull KTM Factory Racing’s Jonny Walker (GB) set the pace at the head of the field. After an incredibly tough opening day in the mountains, the competitors from 53 nations in the 15th edition of the race faced a somewhat shorter course for Off Road Day 2. Hard in places but offering breath taking mountain top Enduro riding in others, it was a day to savour for many. 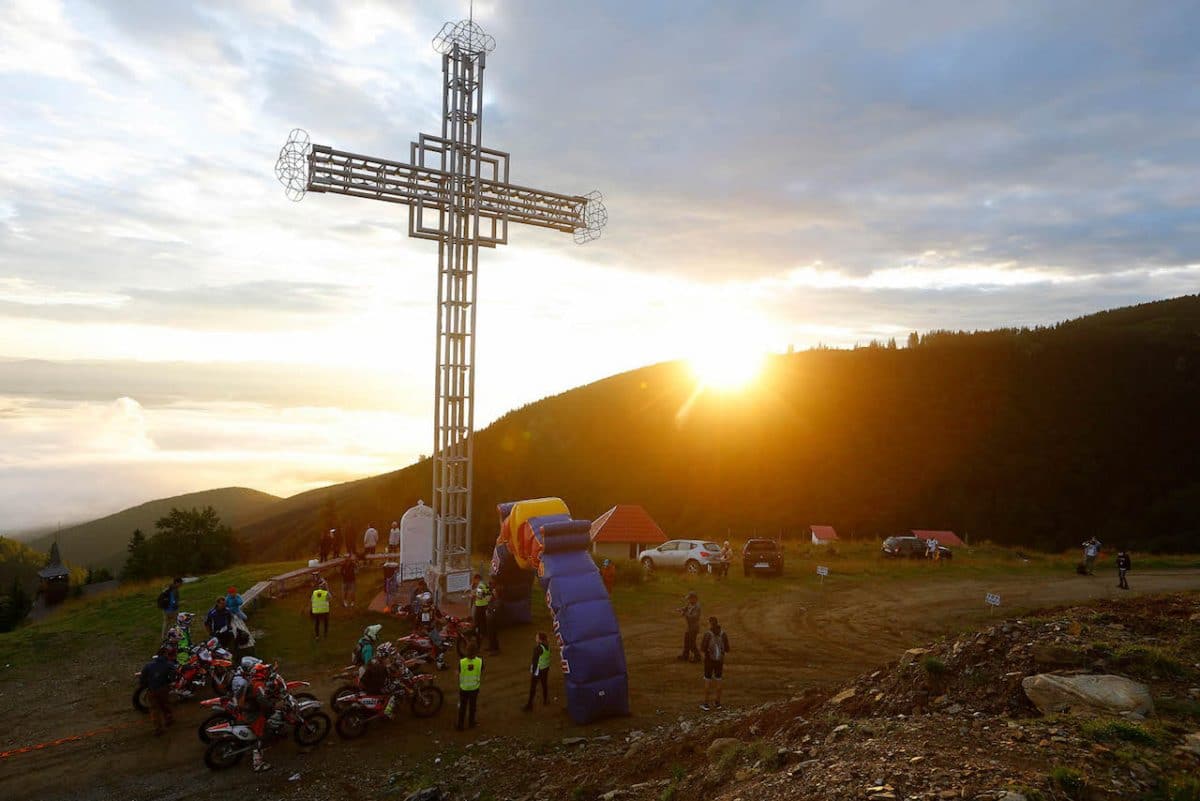 At the sharp end of the field, the battle for Gold class honours raged on. Leading the field out, Lettenbichler was chased down by Young and Walker. At checkpoint four, WESS points leader Walker had eliminated the six-minute gap to his rivals as the trio broke away from the rest of the field. Arriving almost together at the service point, it was too close to call.

But the afternoon told a slightly different story. Holding station at the front, Young managed to weaken Walker’s grip on him. Pulling clear, and bringing Lettenbichler with him, the duo crossed the finish line two minutes ahead of Walker to give the South African the stage win and the overall lead in the race. However, on corrected time, Walker’s morning efforts saw him split Young and Lettenbichler to end his day as runner-up, pushing the young German privateer back to third.

Behind the top three, Poland’s Taddy Blazusiak (KTM) put the pain of yesterday’s shoulder injury behind him to secure an impressive fourth place. The fight for fifth was incredibly tight between British trio Paul Bolton (KTM), Billy Bolt (Husqvarna) and Graham Jarvis (Husqvarna). Only one-minute separated the three riders after over six hours of racing, with Bolton claiming the top five result over Bolt and Jarvis. 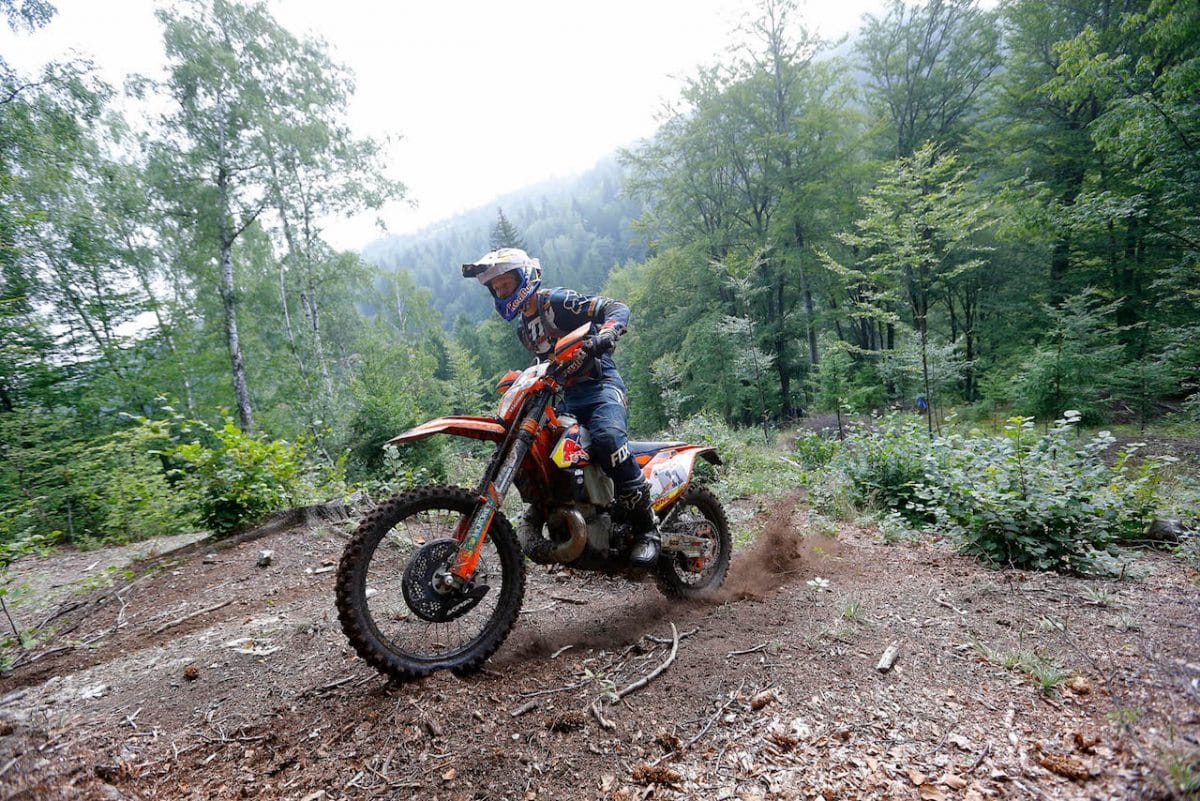 In the Silver class there was a change of stage winner as Austria’s Micheal Walkner got the better of his fellow countryman Dieter Rudolf on Off Road Day 2, while Australia’s Robert Nowark was third. Rudolf continues to lead the category with two days remaining.

Frenchman Jean-Michel Vigand was the winner of the Bronze class, marching to a 12-minute margin of victory over New Zealand’s Norman Thomas. Jond Christophe (FRA) placed third. Despite ending his day in ninth, Brazil’s Gianino Coscarelli continues to lead but sees his advantage reduced to two minutes over Czech Republic’s Bieri Marc.

Lithuania’s Mindaugas Simkevicius had a great day at the office taking the Iron class win from Markus Oberndorfer (AUT) and Tom Oberndorfer (GER). Simkevicius remains stationed at the head of the category.

Now entering the second half of this year’s Hard Enduro Rallye, the race turns back towards Sibiu, leaving behind the region of Straja and Petrosani.

Wade Young (Sherco – RSA): “Overall, it’s been another good day. I’m enjoying the long days on the bike and seem to build my pace more and more towards the end. This morning Jonny and Manni were really pushing the pace, I wasn’t 100 per cent comfortable and so had to sit back. During the afternoon I relaxed into it more and brought the fight to them. We’re only halfway into the race so there’s still two big days to come but, like I said, I’m enjoying it and so that’s got to be a good thing running this pace.”

Manuel Lettenbichler (KTM – GER): “Today was longer than expected and also faster. There were some pretty gnarly sections though to keep things challenging. Jonny, Wade and myself were so close this morning and then in the afternoon we broke away from Jonny and it was another full gas fight to the finish. Wade’s gained some time on me but there’s a long way to go and tomorrow will be another big day for sure.”

Jonny Walker (KTM – GB): “This morning went really well and I was able to pressure Manni and Wade. In the afternoon I found it hard to get the same traction on some of the hills and lost a bit of time. I was falling back a little so just tried to ride smooth and limit the damage as best I could. There’s two days left to race, so there’s everything to play for.”

Taddy Blazusiak (KTM – POL): “I hurt my shoulder yesterday in a crash so I wasn’t sure how today would go. The slippery conditions and a sore shoulder made it tough to properly control the bike but I’m fighting on. Considering everything I’m happy with fourth today, because this is also only my second time racing with GPS. My confidence is growing on the navigation side of things and I’m looking forward to tomorrow to improve again.”