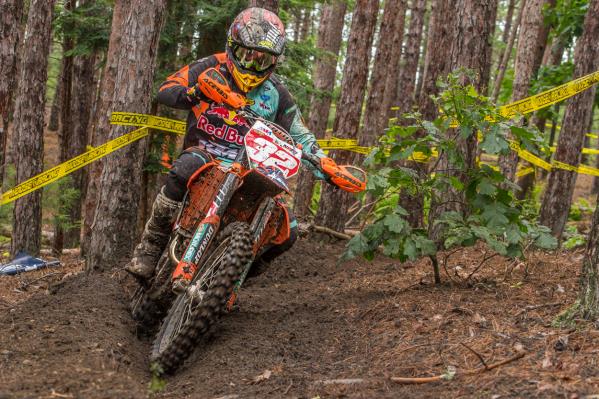 Rainfall took place overnight and the rocky and technical terrain became slick and muddy, which made for interesting racing conditions on Sunday. Toth, a Pennsylvania native, welcomed the adverse conditions as he maintained a consistent string of finishes throughout the day. He eased his way into the opening test with fourth-place but he maintained a top-three position in each of the remaining tests. With an significant test-win in section four, Toth went on to clinch the overall victory by more than 30 seconds ahead of Trail Jesters/KTM Racing’s Ben Kelley in second.

Toth: “I am beyond excited to get my first National Enduro win off my back! I’ve been close but very happy to get it behind me and get more! I rode smart today and using what I’ve learned in the previous enduros to stay consistent and keep the intensity in the tests. I’m pretty happy with my riding but looking forward to making more improvements in the upcoming weeks! I’m very happy to get this win and build on it and go after the championship!”

Kelley’s win in the final test was enough to catapult the Pennsylvania native into the second-place position after a close battle with Tely Energy KTM’s Steward Baylor Jr., who finished third overall after coming in as runner-up in the final test. His teammate, Grant Baylor, was the only rider to win more than one test but an unfortunate crash in test four kept him from challenging the overall win.