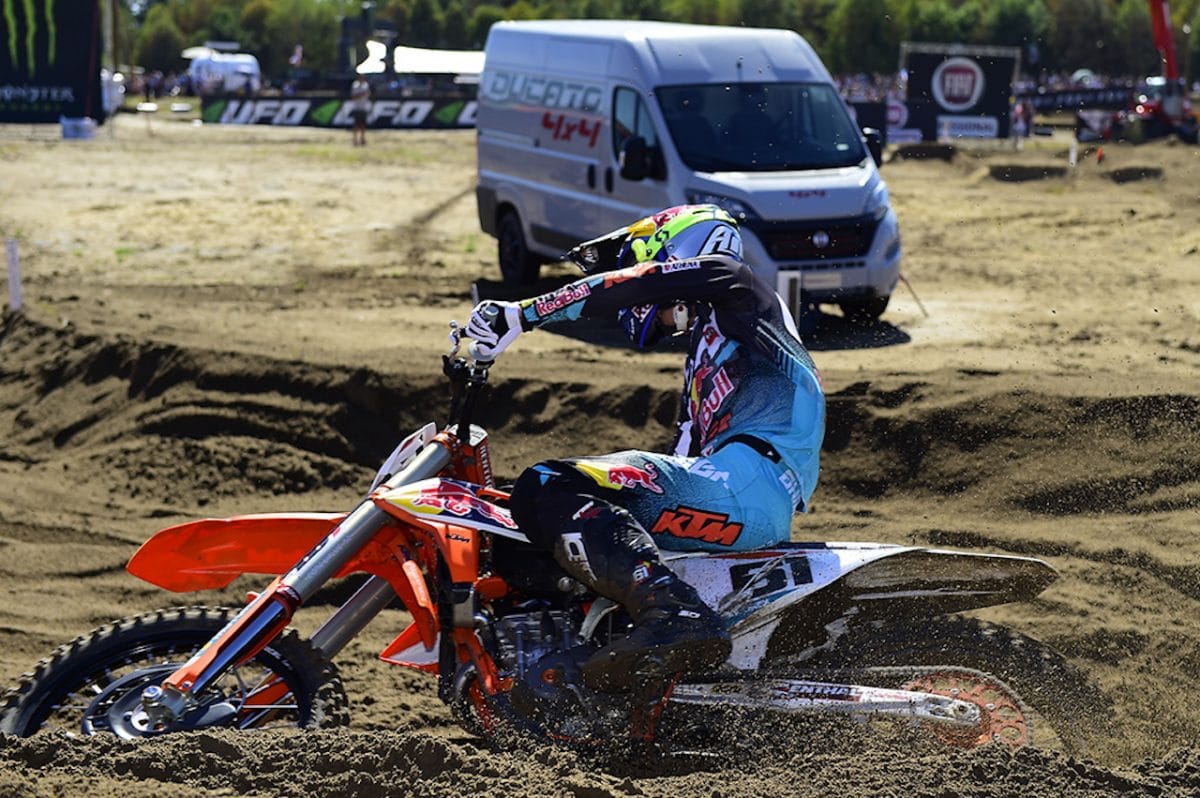 The MX2 racing was just as interesting and showcased nearly as dominant of a performance from Red Bull KTM Factory Racing’s Jorge Prado. Similar to Herlings in MXGP, Prado took Saturday’s qualifying race win and backed it up with a Fox Holeshot to start Race 1 today.

Prado had Rockstar Energy Husqvarna Factory Racing’s Thomas Covington behind him first but title adversary and Red Bull KTM Teammate Pauls Jonass was alongside and took second from the American immediately.

Covington’s Rockstar Energy Husqvarna teammate Thomas Kjer Olsen chased Covington with Team HRC’s Calvin Vlaanderen following both. In a heated battle over 6th was Hitachi KTM UK’s Conrad Mewse and Kemea Yamaha Official MX2’s Jago Geerts. Geerts had the upper hand however with it being his home GP the fans cheered him on to pass the Brit in what was his first race in nearly 6 weeks. 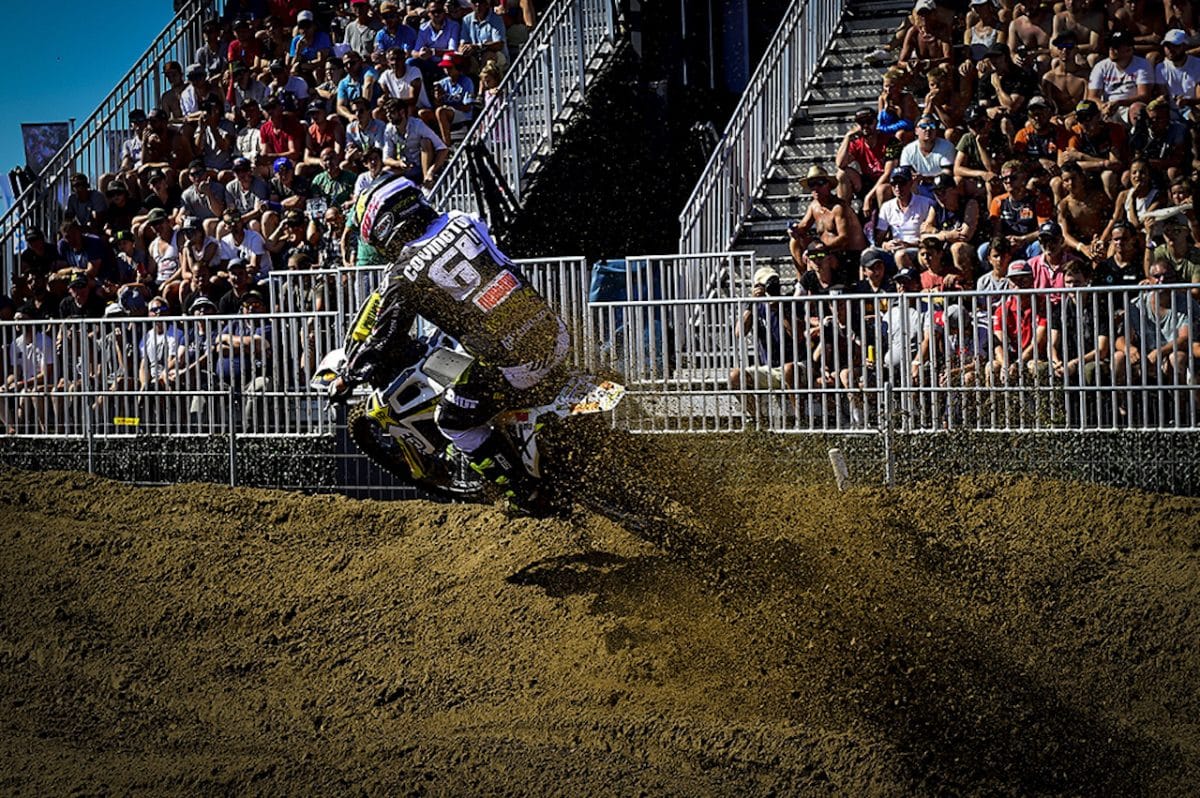 The biggest moment of the race however was the crash of Jonass as he tried to catch Prado for the lead. Jonass miss timed the massive SIDI jump into rollers and landed heavy which ejected him from his bike. Lucky to get away from the fall uninjured Jonass rejoined the race in 4th but lost another spot while trying to kick his clutch lever back into place.

At the finish Prado took the win with Covington 2nd, Olsen 3rd, and Jonass 4th after he passed Vlaanderen back 2 laps after the crash. Mewse managed to take the 6th spot back from Geerts after following the Belgian’s lines for 6 laps.

Race 2 was consistent with the Race 1 for Prado who took the Fox Holeshot again leading Covington and Olsen while Jonass fell remounting in 14th. Kemea Yamaha Official MX2’s Ben Watson started well in 4th but dropped to 7th before the opening lap was complete.

Geerts in the other hand battled again with Mewse taking the spot and advantage of a crash from Vlaanderen. Geerts continued his charge forward taking 3rd from Olsen and then going after Covington for 2nd. 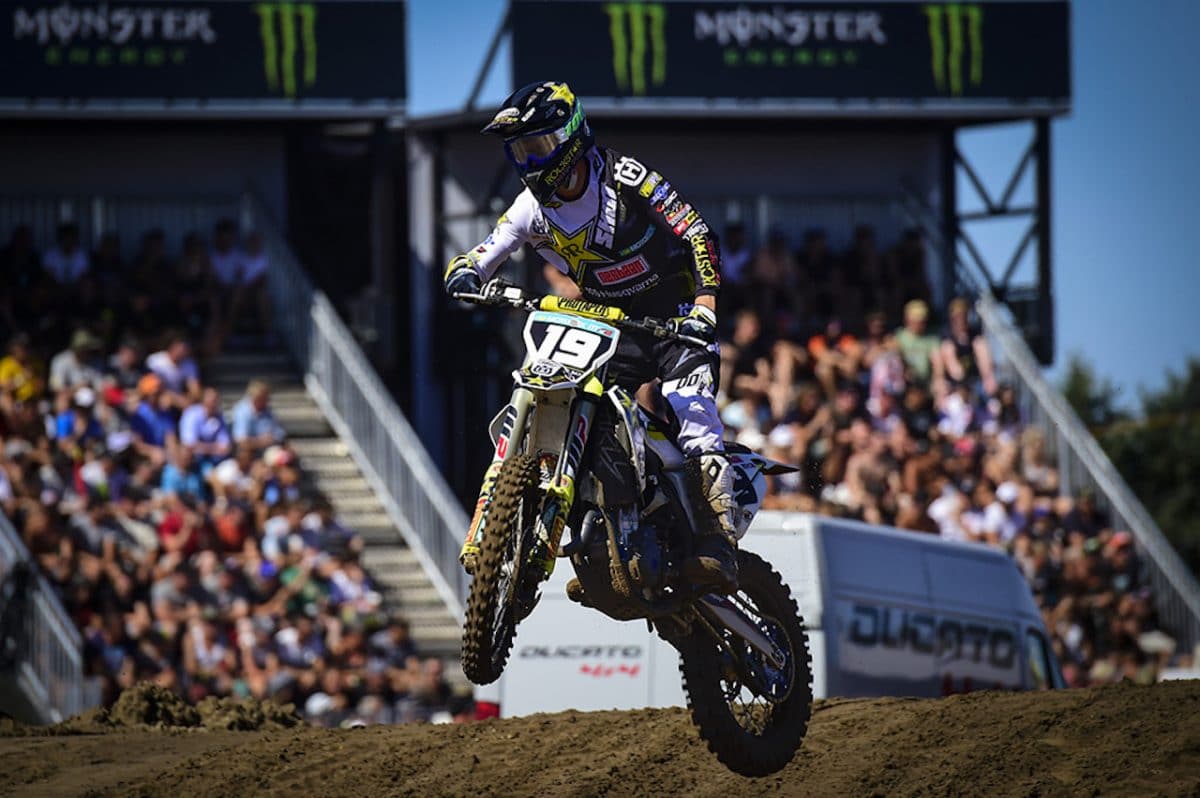 Covington made a mistake and jumped off the track while under pressure from Geerts and lost the spot but somehow managed to stay on the bike and take 3rd. Prado’s 2nd race win was followed by Geerts, Covington, Olsen, and Watson while Jonass fought back to 6th.

In the overall podium result it was perfect 50 points from Prado followed by Covington’s 2-3 and Olsen’s 3-4. Prado now leads the championship by 28 points after gaining 17 points on Jonass this weekend.

Jorge Prado: “It was a great weekend getting the qualifying win yesterday and today I felt really good already in warm up with the bike and the track. The first race I got a good start and could win then in the second race got the FOX Holeshot and won again. We train really hard and you can tell we get to a track like this.”

Thomas Covington: “This weekend I’m really happy to be up here on the podium in Lommel. I really struggled here my first few years in Europe so to come away with a podium is pretty big for me, I think it has been a long time since an American was on the podium at Lommel so it is a pretty cool accomplishment.”

Thomas Kjer Olsen: “It is really great to be on the podium again. I had a couple of rough weeks off the podium so I was really motivated to get back on the box, just get 2 good starts, and ride like I know I can. I am happy for me and for the whole team to have 2 riders on the podium at the home GP.”