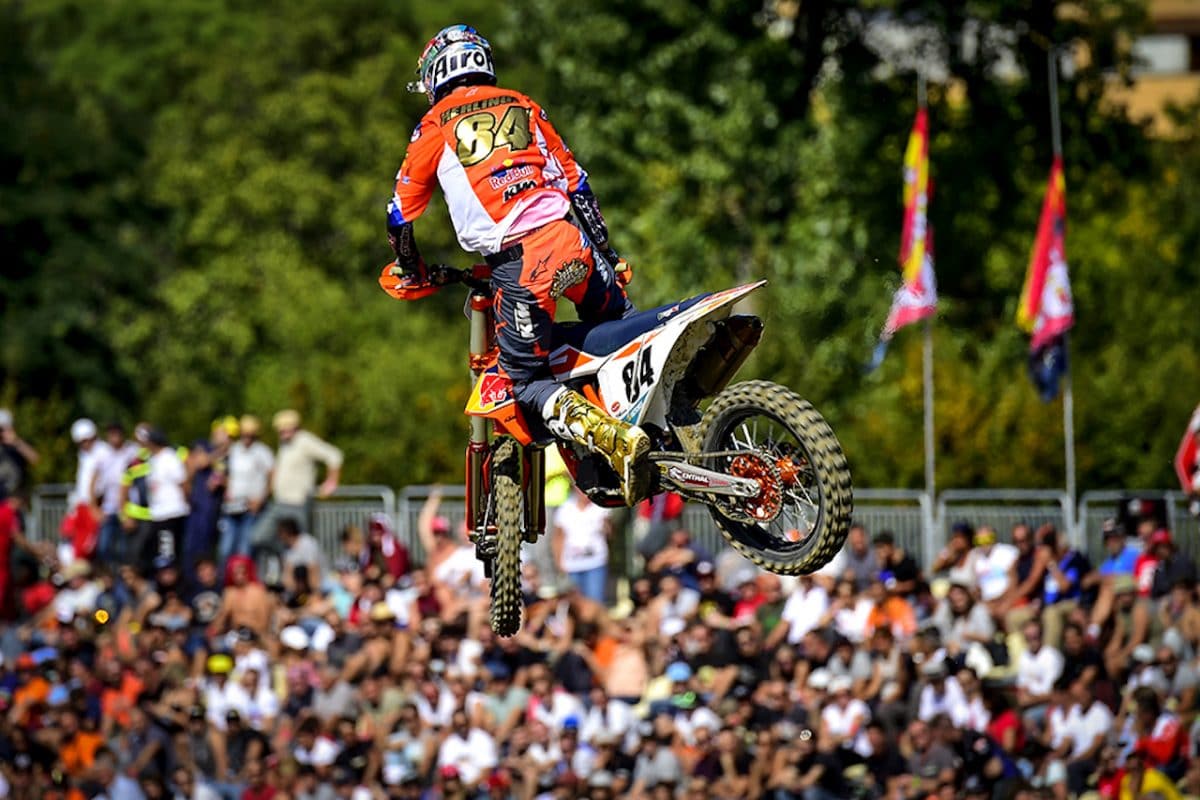 The new MXGP World Champion, Red Bull KTM Factory Racing’s Jeffrey Herlings, had nothing to prove this weekend but still came out and dominated with double race wins to take the final MXGP overall of the year. Tim Gajser rode well to finish in second overall on his HRC Honda followed by Clement Desalle in third.

The first MXGP race was started with a season first Fox Holeshot from Gebben Van Venrooy Kawasaki’s Alessandro Lupino in front of his home crowd as Red Bull KTM Factory Racing’s Antonio Cairoli opted out of racing to recover for next week’s Monster Energy FIM Motocross of Nations.

Behind Lupino was Team HRC’s Tim Gajser, Wilvo Yamaha Official MXGP Team’s Jeremy Seewer, and then Herlings. Seewer and Herlings banged bars in the 4th corner was put the Dutchman up to third. Gajser took the lead from Lupino before the end of the first lap along with Herlings.

Lupino was then third but a collision with Seewer dropped the #77 out of the top 20 and the Swiss rider to 10th. Monster Energy Kawasaki Racing Team’s Clement Desalle took over third with Rockstar Energy Husqvarna Factory Racing’s Gautier Paulin 4th and Wilvo Yamaha Official MXGP’s Shaun Simpson 5th.

On the third official lap Herlings took the lead from Gajser and a lap later Monster Energy Kawasaki Racing Team’s Julien Lieber went to 5th past Simpson. In the remaining 16 laps the top 5 held their positions. Herlings had the race win ahead of Gajser, Desalle, Paulin, and Lieber while Seewer made a last lap pass to get by teammate Simpson for 6th.

Race 2’s Fox Holeshot belonged to Herlings who had Gajser and Desalle just behind him. Simpson had another good start in 4th with Lieber again behind him. Paulin was in 6th and had to deal with pressure from Monster Energy Yamaha Factory MXGP’s Jeremy Van Horebeek.

Herlings took the race win with Gajser again 2nd then Desalle, Lieber, and Van Horebeek. Paulin took 6th after passing Simpson with 2 laps to go. In the overall Herlings was the clear winner for the 84 time in his career as Gajser took 2nd and Desalle took third.

Jeffrey Herlings: “It is a great way to finish of the year, to finish with a win. I am very happy and thankful, it has been a great journey, a great experience, a great year, and I have met a lot of great people. I really want to thank especially my team as without them I wouldn’t to be able to do what I did… it is something that will be hard to ever accomplish again. The most beautiful way to finish off the year is to go 1-1 at the Monster Energy FIM Motocross of Nations and if I can accomplish that it will be the cherry on top!”

Antonio Cairoli: “I am really happy to be here, it is such a great place for racing and I think this is a great way to step up our sport. I am looking at the bigger picture of the Monster Energy FIM Motocross of Nations next week, it is very important for me and the country of Italy. Like I have said congratulations to Jeffrey and thanks to Youthstream for another good and very intense championship. They have stepped it up with a more professional staff so I am really happy to have another 2 seasons and follow my dream to fight for another world title.”

Clement Desalle: “Finishing third in the championship is really great, also it is a great feeling to be on the box at the end of the championship. My whole team works to be the best possible and to beat those guys and have the best result in the GPs. It is not easy but we are very motivated… it was a very good season overall.”