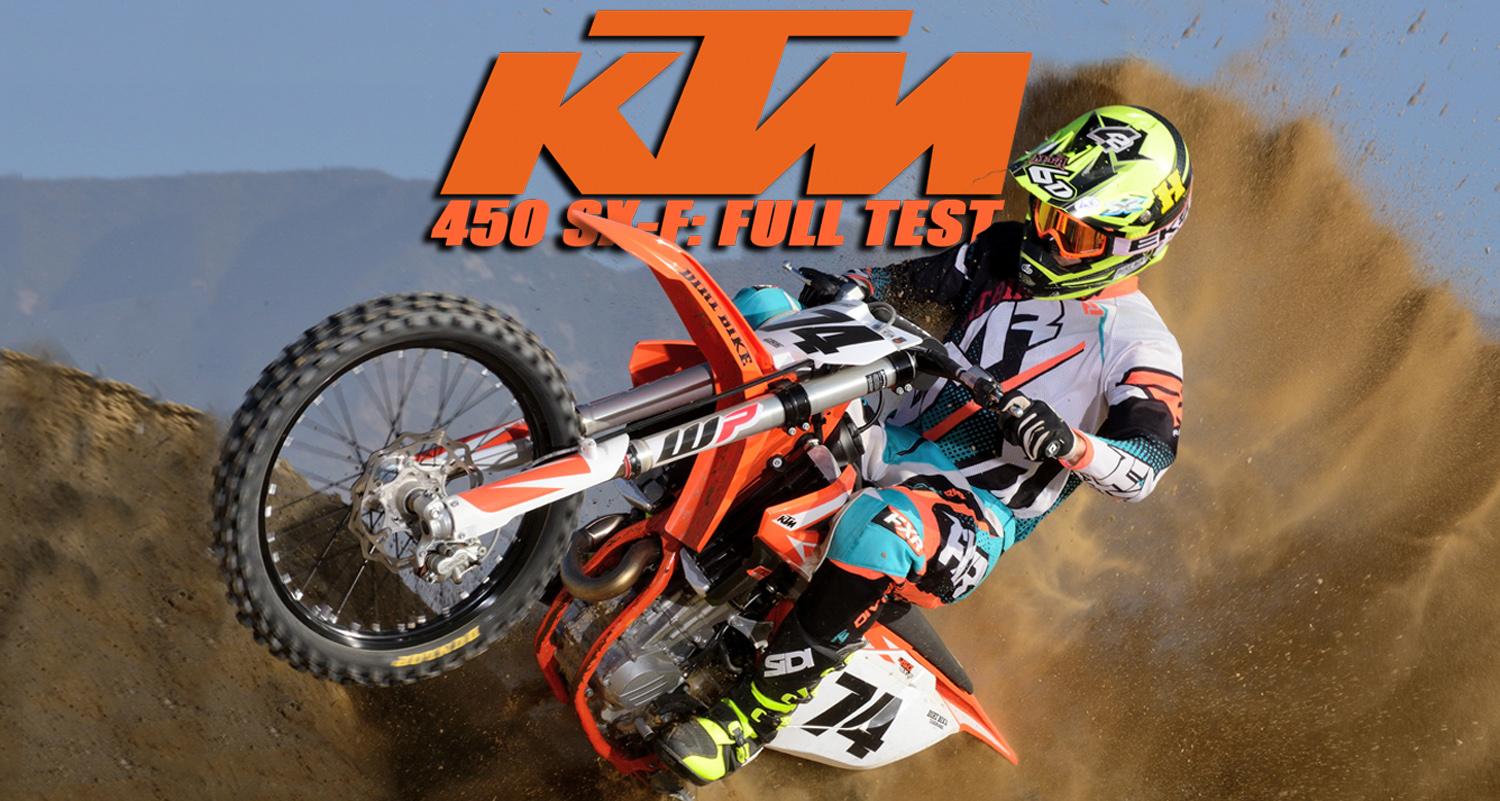 This is an unusual moment for KTM. The 2018 KTM 450SX-F is almost unchanged. It has a number of cosmetic differences and detail changes, but when it comes to hard engineering, the bike is virtually the same as the 2017 model. We can’t remember the last time that happened. The succession of new motors, new suspension components and redesigns from KTM has come non-stop for a long time, and has pushed the Austrian maker to the forefront in the MX world. Beyond that, KTM has pushed the entire motocross world to a higher level. Without that influence, we might think that electric start is impractical. We might think air forks are pointless. We might think that 60 horsepower is unmanageable. And we might not know how light a 450 motocross bike can be. 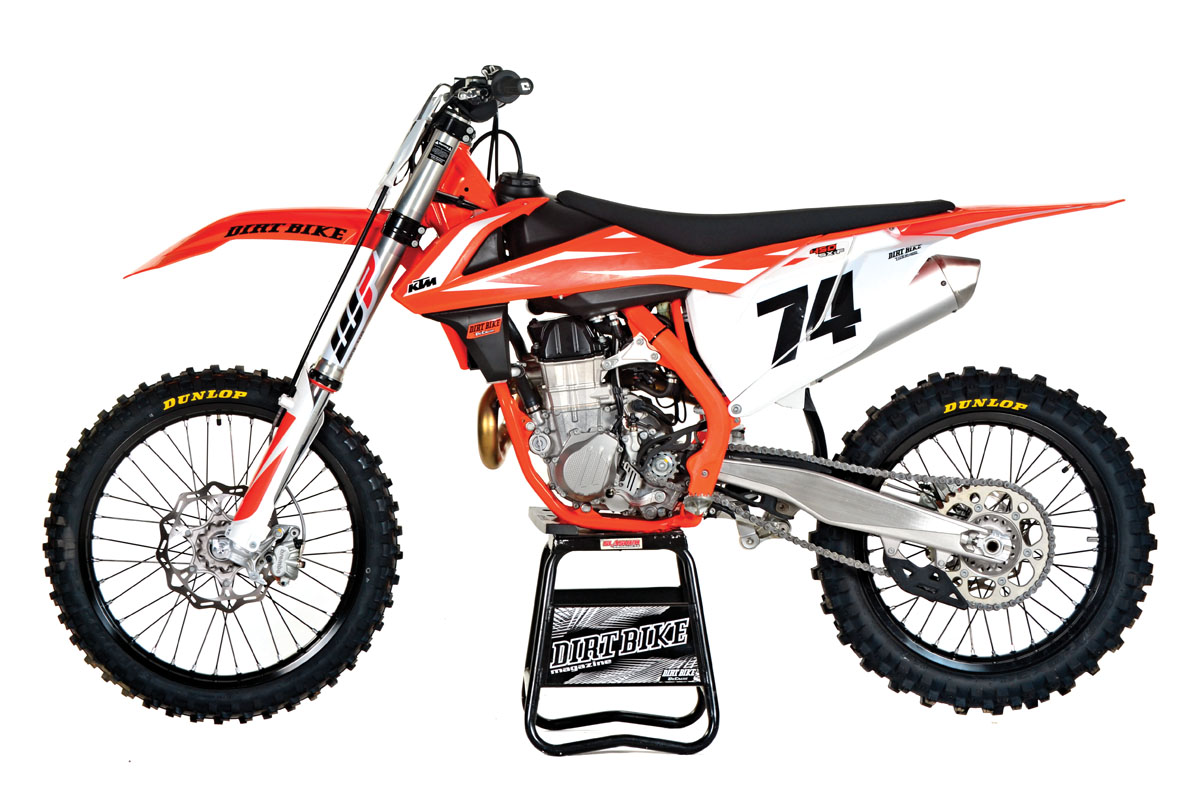 THE PATH HERE
The dues have been paid. KTM might be highly regarded in the MX world right now, but it wasn’t always that way. Anyone over 30 remembers when KTM was hopelessly out of place in professional MX. Now, after Ryan Dungey’s third consecutive Supercross championship, KTM has earned the right to let its R&D department rest before the march continues. This basic version of the 450SX-F was launched as a limited-production 2015 1/2 Factory Edition. It was much lighter than the 2015 model with an all-new motor and frame. About 500 were made, but it was the basis for a full production run of 2016 standard editions. At the time, it still had the much-berated WP 4CS fork, which held it back in most shootouts. That was changed for the 2016 1/2 Factory Edition, which was the debut for the WP AER 48 air fork. Following the pattern, the air fork was stock on the 2017 standard models.The 2018 model has an upgraded battery, new suspension valving, an orange frame and a number of cosmetic details. It remains a single-overhead-cam motor with electric start. This motor’s predecessor lost its kickstarter a few years back, starting a cascade of others to do the same. The trick was that KTM didn’t do it in a desperate attempt at losing weight. The 450SX-F was already the lightest in class. Between the missing kickstarter and the move to an air fork, the KTM became lighter than most 250s and even some two-strokes. We weighed this year’s 450 at 225 pounds without fuel. For the record, we had last year’s at 224, but we’ll chalk that up to variance in manufacturing, or perhaps the new battery. The next lightest 450 is the Kawasaki KX450F, tested in this issue at 231 pounds.Last year, in addition to the new fork, the KTM got a handlebar-mounted switch that had three functions. It allowed a choice between two different EFI maps, it could activate traction control, and it could activate launch mode for better traction off the start line. All of these are ways to alter the bike’s power output, which has been the most in the class for some time. Last year the Husqvarna, Honda and Yamaha all had closed in, but according to the FMF Dynojet dyno, the KTM was still the champion, and we don’t expect that to change for 2018.

THE BEST BEAST
When you ride the KTM, you know that it’s a powerful motorcycle. It makes a ton of low-end and then keeps on going and going on top. There are other 450s that do as well down low, but where the KTM separates itself is in over-rev. If you stay in the throttle without shifting, it keeps on making more and more power. In reality, no one really likes screaming a 450 all the time. Like most bikes, the 450SX-F actually handles better at low rpm when the spinning crank isn’t exerting as much of a gyro effect on the whole motorcycle. Regardless of that, there are times when you just have to do it, and the KTM allows that option. In terms of throttle response, the KTM is actually middle-of-the-road. It’s not as snappy as the Honda, but it has a more lively feel than the Yamaha. That snap isn’t something that shows up on a dyno, but we all know when we feel it. The real challenge for any 450 is making all that horsepower manageable, and KTM has done a good job here. It’s still a lot of motorcycle, but you can ride it well below the peak power and still go very, very fast. Traction control, we discovered, isn’t all that useful if you’re the type of rider who already rides at low rpm. Down there, you already have a kind of rider-generated traction control. If you tend to rev the bike, the TC mode is more noticeable, but then you’re probably a more aggressive rider who doesn’t really want it. As far as the two maps available on the handlebar switch go, there’s only a slightly later hit with map two. The possibilities are endless with this type of technology, and we would like to see KTM offer a more substantial difference. Heck, for some tracks, we would love a button that turns the bike into a 350.

LET THERE BE LIGHTNESS
The one area where the KTM has no peers—aside from its brother, the Husqvarna FC450—is in the weight department. Recently, there’s been a lot of talk about mass centralization, which is thought to be a way to mask excess weight. There are some situations where that thinking is sound, such as in the air, but mass is still mass no matter where it is, and you can’t fight Newton. The KTM feels lighter than any of the Japanese 450s because it is lighter. It’s lighter in the air, it’s lighter in turns, it’s lighter when braking and it’s lighter under acceleration. The SX-F has a 15-pound advantage on some bikes, and we defy anyone to gain 15 pounds and still perform as well. The KTM turns much sharper than a Yamaha or a Kawasaki, and it’s still reasonably stable. It’s a great-handling bike, and we feel comfortable giving all the credit to weight. We have heard Japanese engineers say that the KTM won’t survive some of their durability tests. There’s apparently a 15-foot drop test at the Yamaha factory that only a YZ can withstand. In the real world, though, the KTM has a solid track record when it comes to major failures.The one area where KTM has long struggled is suspension. Most of the critics were silenced when the WP AER 48 air fork arrived. It was a dramatic improvement. Now that we have a year and a half in the field with this fork, are we still impressed? Yes! The KTM’s front suspension has three things going for it. It’s easy to tune, it’s immune to most maintenance concerns and it has acceptable performance. It might seem odd that we list performance last, but when it comes to air forks, that’s never been a big issue. Difficult setup, the need for constant maintenance and the possibility of failure are the hallmarks of air. Racing fans will always remember Ryan Dungey missing a heat race in 2013 because of an air-shock failure, as well as Ken Roczen’s air-fork failure at the 2016 Glen Helen National. Those incidents still didn’t do as much to tarnish the image of air forks as the unworkable complexity of the Showa Triple Air that has been on the Kawasaki KX450F since 2012. For the most part, the WP AER 48 is as simple as possible for the user. There’s one air chamber (left fork leg only), and it rarely changes over time. It doesn’t even have to be that precise. The standard setting is 156 psi. At first, we would make changes of a pound or two. That’s just a waste of time. For the Glen Helen REM track, which has few jumps and low speeds, we could drop the pressure by 15 pounds with good results. We rarely found a track that needed more than 160 pounds. The fork’s bottoming resistance improved this year. In terms of ride quality, the WP fork is very good but not perfect. It still doesn’t like slap landings and isn’t as cushy on square edges as the coil-spring fork on the Yamaha YZ450F. But, that’s a very high standard of comparison.

THE YEAR TO COME
In 2017 the KTM won Dirt Bike’s 450 shootout rather easily. It had the most power, it was still very manageable, it was the lightest and it offered good detailing. The brakes were the best, it had a hydraulic clutch and it was the only bike with electric start—again, except Cousin Husky. For 2018 the KTM hasn’t changed, but much of the class has. There are two more bikes with electric start and a massive change for another. A repeat win certainly isn’t guaranteed, but one thing is certain—the KTM 450SX-F will still be an amazing motorcycle.