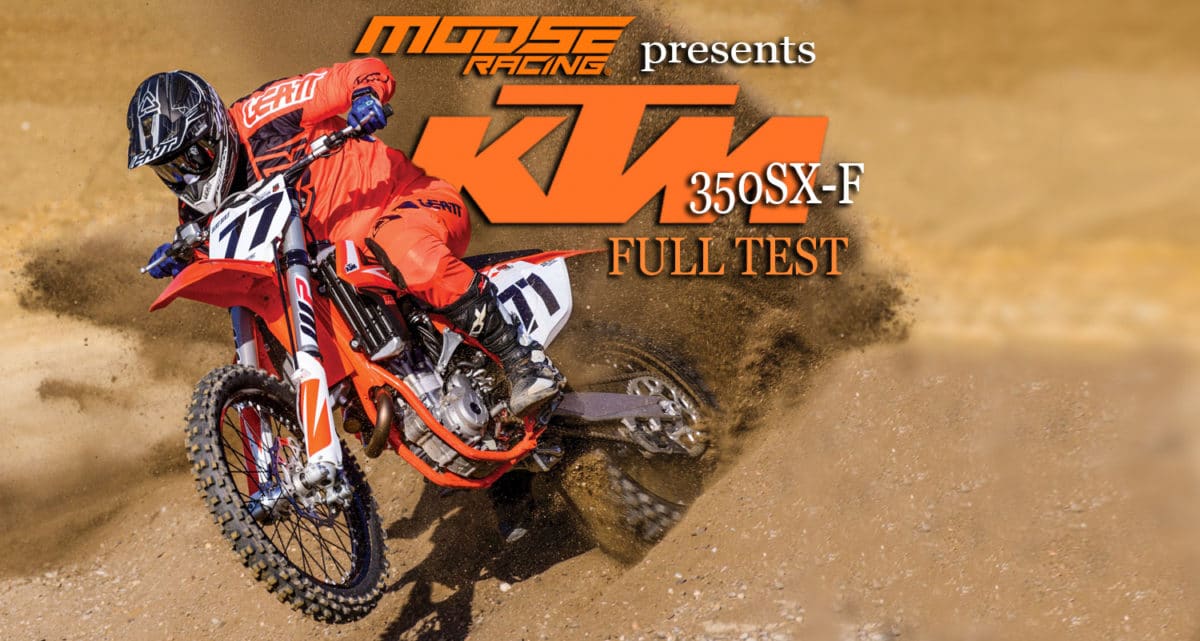 Motocross isn’t a rational sport. If it were, 95 percent of us would be riding KTM 350s, and the other 5 percent would wish they were riding KTM 350s. Yet bigger, clumsier bikes are the order of the day simply because that’s what guys like Tomac, Musquin and Roczen ride. It doesn’t make any sense. John Force drives a nitromethane-burning, 8000-horsepower funny car, but that doesn’t mean anyone wants to commute in one.
Ego and ambition are the random factors that push riders toward bigger bikes, but contrary to what you might think, a 350cc motocross bike is the biggest ego booster of all. Most riders ride better on a smaller bike. Whether or not they ride faster depends on a variety of factors, such as rider fitness, track conditions and layout. The KTM 350SX-F was conceived in a period when pro motocross was toying with the idea of limiting the premier class to 350cc. It was a short-lived discussion, but KTM took it to heart and actually produced the bike that everyone was talking about. Then KTM backed up the concept with Antonio Carioli’s 2010 world championship, which he won riding a bike based on the new 350.
In the time since then, Cairoli, KTM and the pro motocross world as a whole have backed away from the idea of downsizing the premier class. Pro riders always want more power, and, as it turns out, they can use it. But that has no bearing on the amateur world, where the 350 concept is still gaining momentum. Right now, KTM and its blood brother Husqvarna produce the only 350s, but that will change.

UPSCALE DOWNSIZE
The 350 was produced by upsizing the 250SX-F motocross bike rather than downsizing the 450. Oddly enough, this wasn’t a big weight-saver. The 250 platform is considerably more complex with its double-overhead-cam layout. The motor uses finger-followers between the cams and the valves, which allows much higher rpm without the danger of valve float. Both the bore and the stroke were increased to make the 350, and many parts were beefed up. Anyone who knows his KTMs can still tell the difference between the 250 and the 350 motors at a glance, so there’s no real danger of masquerading in the wrong class.
In the lower end, the 350 motor uses a more traditional clutch with six coil springs rather than the diaphragm spring in the 450. All the bikes in KTM’s MX line lost their kickstarter provision several years back, leaving them electric-start-only motorcycles. The 350SX-F motocross bike’s gearbox is a five-speed, whereas the 250 and the cross-country version of the 350 have six-speeds. The chassis of the 350 and the 450 are almost the same, so in the end, the 350 is only 3 pounds lighter than the 450; 222 pounds versus 225 pounds. The good news is that the KTM 450SX-F is an extremely light bike in its own right, so when you compare the 350 to Japanese 450s, the weight gap is as much as 18 pounds—and some of those bikes don’t even have electric start.
For 2018 the 350 has very few changes. It has a more powerful battery. The suspension valving is different, and it gets an orange frame. There are a few other cosmetic changes, but by KTM standards, this is a very peaceful year.

RIDING THE LITTLE BIG BIKE
As you’ve doubtlessly heard before, the 350 is its own beast, equally different from the 250 and the 450. The biggest misconception about the bike is that it’s been branded as a revver. People assume you have to keep it up in the 14,000-rpm range if you’re going to compete with 450s. It’s certainly true that the bike screams and makes its best power up on top, but what gets lost in translation is that the bike has a very broad powerband. A 450 runs best between 6000 rpm and 10,000 rpm, whereas a 350 makes plenty of power from 7000 rpm all the way up to the rev limiter. The 350 makes power forever. If you don’t want to shift, don’t; the 350 will go and go and go. Most 450 riders will still have to make an adjustment, because you can’t hide behind torque. When you get tired, there’s no option of sticking it in a tall gear and idling around the track. You have to stay in race mode.
Another 350 misconception is that you have to use the clutch more than you would on a 450. Not true; you just use it in a different way. On a 450, you often do your braking with the clutch for fear of stalling. That’s not as much of an issue on the 350. You can let the revs drop surprisingly low without worrying about the cough-and-die syndrome. If you get lazy and don’t downshift, you’ll need to use the clutch to bring the revs back up when you accelerate out of the turn. The hydraulic clutch can take a lot of abuse, and the plates have an impressive lifespan. Weirdly, it has a slightly harder pull than that of the KTM 450.
There are two areas where the 350 surrenders an advantage to 450s. The first is the start. It should be pointed out that in amateur classes, most riders don’t use full power on a 450, even on the start. Usually, the bike wheelies or spins and the 350SX-F is much easier to launch straight and true. In the upper classes, such as intermediate and expert, mistakes are less common and the 350 will suffer. It has a launch control mode that allows the rider to hold the throttle wide open prior to the gate drop, but the jury has never decided if this is really needed on the 350. The same handlebar switch also allows you to select between two different maps to alter the power delivery or to select traction control mode. These options are kind of fun to experiment with, but the differences are too subtle for most riders to use on a practical basis. Most of our test riders like Map 1 without traction control.
The other place where a 450 has a slight advantage is a long, loamy uphill straight. As it turns out, very few tracks have sections that are long, loamy and uphill enough for this to be a factor. The simple truth remains that the 350 has a much higher cornering speed, which gives it a head start into every straight. By the time a 450 overcomes this, the straight is usually ending, and the 350 can go much deeper into the turn.
In suspension, the 350 uses the same fork and shock as the KTM 450SX-F, but they feel different. The 350 will dance around a little more in a non-threatening way. All other factors being equal, bigger bikes have a little more straight-line stability. This isn’t because of the weight difference, but probably has something to do with the gyro effect of internal spinning parts. The lighter crank of the 350 means it has less tendency to hold its place in space. That’s also why the 350 feels so much lighter and more agile. The fork itself is the WP AER 48, which rescued KTM last year by replacing the infamous 4CS. It’s the best air fork on the market, and it was a vast improvement. This year the valving is a little softer initially with better bottoming resistance. The recommended air pressure is 10.7 bar (155 pounds), which is good for riders weighing around 180 pounds. Most riders want less pressure. Go ahead and play with it; there’s only one chamber. The best thing about the KTM fork is that you won’t mess things up as you can so easily on some other air forks. The rear suspension is typically best around 104mm of sag, but we have found that rider preferences vary greatly with KTMs.

CARE AND FEEDING
The KTM 350 is not a difficult bike to own. The bars, chain and rims are top quality. The brakes are outrageously good. The air filter is easy to clean, and the battery keeps its charge for months and months. As with just about all modern MX bikes, you see occasional trouble with the fuel pump and various sensors, but that’s not anomalous. You can’t realistically cite maintenance as a reason to shy away from the 350, and you certainly can’t blame performance. The only reason that amateur riders can point to is the lack of selection in the 350 MX world. KTM and Husqvarna are the only two choices, and critics claim it isn’t much of a choice at all. But, at least, it’s a very good choice. 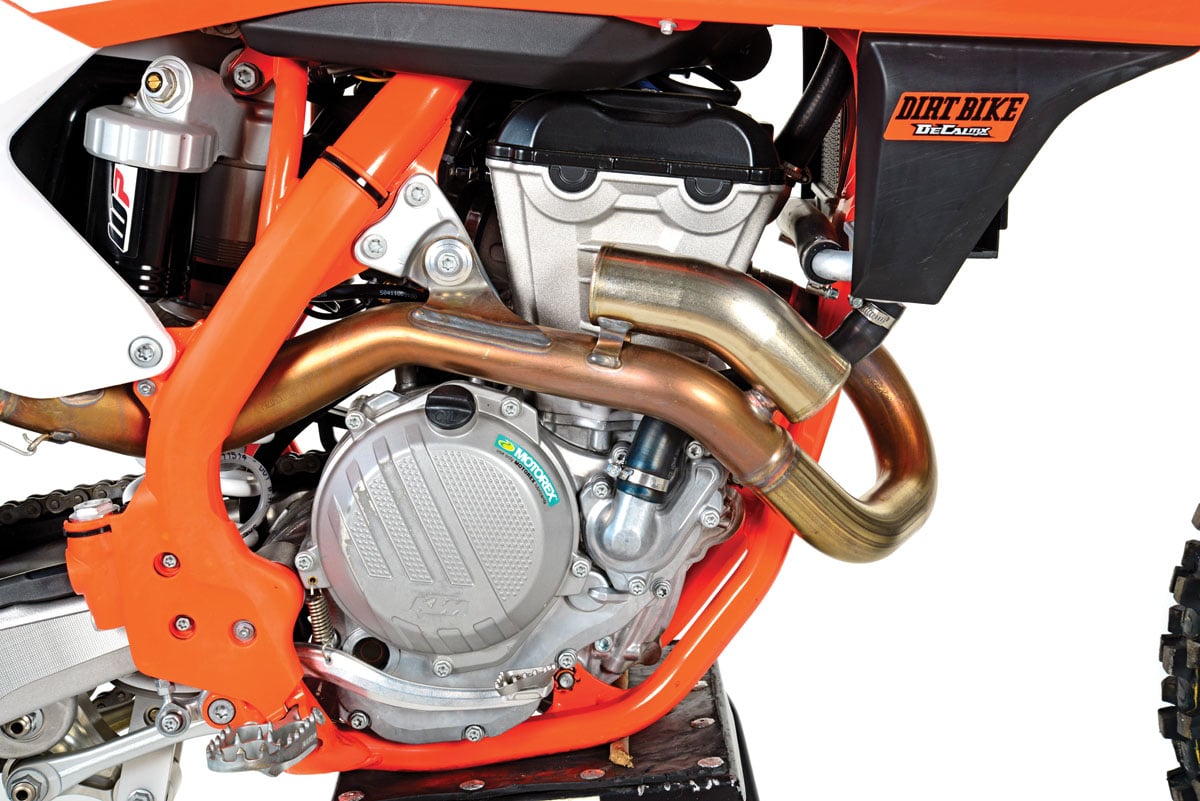