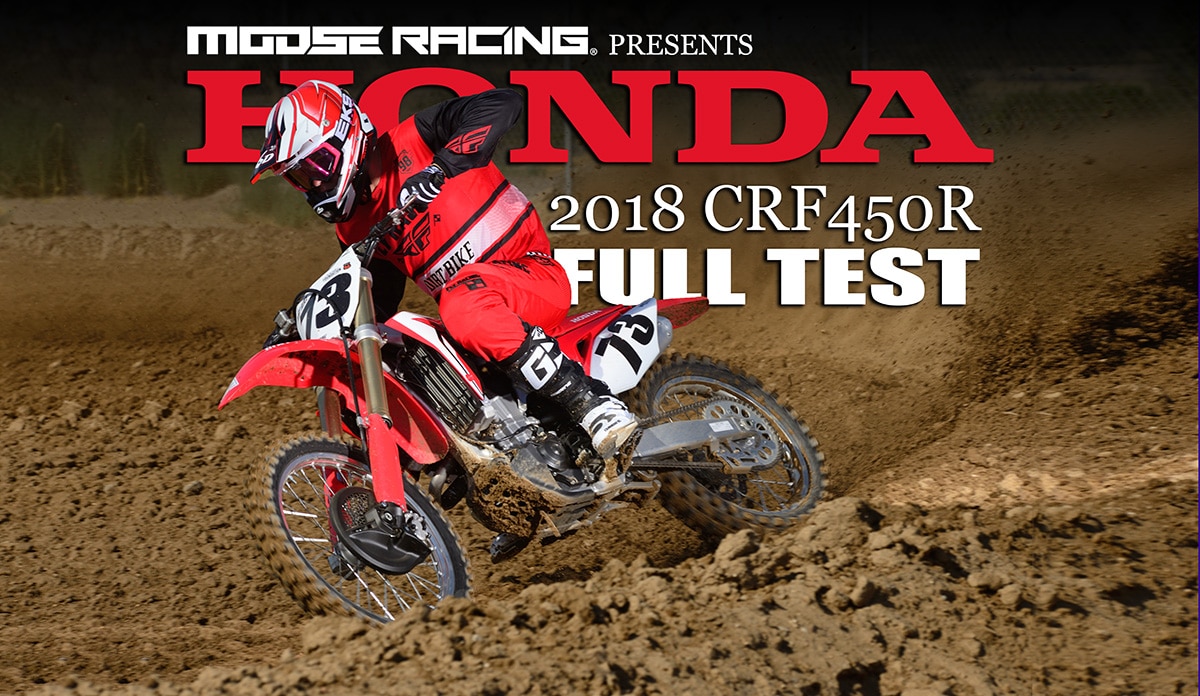 When Honda released an all-new bike in 2017, we all assumed that was the final stop for a few years. Not so. The 2018 CRF450R shows that Honda can, occasionally at least, change direction. The bike was conceived as a kick-start model with the option of an electric-starter kit. Now, it’s electric start only with no kick-start lever in sight.
Most of the other changes for 2018 are what you expect from a second-year model—new suspension and new mapping. Even Honda can make these kinds of changes without months of lead time. All of it, though, is proof that it wants to be back on top of the 450 class.

IN OUR LAST EPISODE
The 2017 Honda was stunningly new. The motor looked vaguely like the old one and used the SOHC concept, but there were some very new ideas in play. The most interesting was the intake routing. Since the advent of vertical single-shock suspension, virtually all manufacturers have made the intake airflow go around a corner to get into the motor. Now, Honda routes the intake over the top shock mount. It allows more of a downdraft intake and eliminates the bend around the shock. That lowered the shock, which lowered the center of gravity.
Even though the engine still has the Unicam logo, Honda rewrote the concept last year. Originally, the cam directly actuated the intake valves and rocker arms were used for the exhausts. Now, the cam still sits over the intake valves, but there are finger-followers between the lobes and the valve buckets, Formula 1-style. Rocker arms are still used for the exhausts. Everything was new about the EFI system in 2017, with a more compact fuel pump and throttle body. One of the few features that remained from previous years was a handlebar-mounted map switch with three options for power delivery (but no launch control). Honda also kept the twin-canister exhaust system, although it has only one head pipe, unlike the newly announced CRF250R, which has two independent exhaust pipes, from front to back. The bike got a new frame shod with a titanium fuel tank, and a coil-spring Showa fork replaced the KYB PSF air fork. An all-new KYB shock was designed to fit the parameters of the relocated shock.
As for the new-for-’18 changes, the electric starter is tops on the list. It’s similar to the one on the CRF450RX off-road bike, but Honda gave the motocross version a high-end lithium battery, which is said to be exactly the same as the one used on the factory race bikes. The kickstarter is gone, but the fact that it still has a provision in the cases for one shows that the engineers weren’t all in with the electric-start concept from the start. The capacitor that allowed the EFI system to light up on the old bike, which had no battery to do that job, is gone now, so if you really want a kickstarter, you’ll have to do more than buy the lever, shaft and gears.
Honda also gave the fork and shock stiffer springs and new valving for 2018. In an effort to make the chassis more forgiving, the engine hanger is different. And, the EFI mapping change affects only map one with the intent of making the power delivery smoother down low.
When the smoke cleared, the new bike gained 5 pounds over last year’s. The 2017 model weighed 235 pounds without fuel on the stunningly accurate and well-decorated Dirt Bike superscale. The 2018 model weighs 240, which makes it officially the heaviest bike in the 450 MX class (so far). We still haven’t weighed several of the others, but reports are that the KTM, Husky, Kawasaki and even the Suzuki are unchanged in the weight department.

BACK TO BACK
Just so you know, we loved the 2017 Honda. The power was great and the handling was even better. In our shootout, it finished a very close third, although that in itself was somewhat misleading. The KTM and Husky were nearly tied for first because, in the opinion of many test riders, they were nearly the same bike. The Honda was close behind. The new CRF450R has all the same strengths. It’s extremely powerful. Like last year’s, it has tremendous snap. It barks hard off the bottom and then pulls hard to an amazing redline. In terms of absolute horsepower, the Honda still is basically on par with the 2017 KTM, Husky and Yamaha according to the dyno. There’s a distinct difference in the way it feels, though. The Honda is livelier than the others, it revs more quickly and has a more distinctive hit. Some riders love that, while others are intimidated. With current 450s, we’re talking about almost uncharted levels of horsepower from a production dirt bike. The riders who have the easiest time dealing with it are strong and fit. That’s why Honda did a little work on the standard map this year. If you ride the ’17 and the ’18 models back to back, it’s immediately clear that the new bike has a smoother transition from stop to go. It doesn’t jerk you around if you prefer to ride at the lower end of the powerband. If, on the other hand, you rev the bike, you probably won’t notice any difference. The softer power curve (number two on the handlebar switch) is still a viable alternative for those who have a hard time dealing with so much horsepower. That’s most of us.
Despite gaining weight, the Honda’s second-biggest strength is that it’s still relatively easy to toss around, at least by 450 standards. It steers light going into turns and allows you to change lines mid-corner if you have to. Honda has always done a good job of covering its weight; it’s just that this year there’s more to cover. The KTM is a good 16 pounds lighter, and all the good handling manners in the world can’t cover that up.

RIDING ATTITUDES
We still have a natural affinity for well-setup coil-spring forks. The Honda’s is clearly well setup. We were apprehensive when we heard that the spring rates were upped at both ends. The previous version was already a little harsh on small stuff. It turned out that stiffer is better for high speeds without making it any more harsh on little impacts—if anything, the Honda is cushier. We increasingly feel the Honda’s stiff feel is mostly the result of a stiff chassis. Last year we know that some JCR riders would leave the rear of the tank and the middle of the exhaust unbolted in order to reduce frame rigidity. That’s why Honda changed the head stay this year too. The new bike is better everywhere, although still not the plushest bike in the world if you ride nothing but smooth tracks.
The bike works best with considerable sag in the rear—as much as 110mm. When you have more preload it feels nose-low, and that can result in some mild headshake at speed. The operative word is “mild.” If you complain to anyone who rode a Honda from the ’90s, he’ll shake his head and call you a wimp. With the rear end a little lower and perhaps some additional rebound damping clicked into the rear shock, there’s no headshake at all, and the bike still turns as well as anything on the track.

HONDA STUFF
Our biggest single CRF450R complaint for several years running has been the clutch. Honda redesigned it last year, but it still has a stiff pull and a vague feel. It heats up quickly and then wears out. Aftermarket parts help, but they don’t cure it. While we’re in gripe mode, the 7/8-inch handlebar is still there and it’s still oddly out of place on a premium motorcycle.
On the flip side, the brakes and the gearbox are solid. The tires are excellent, the wheels are the strongest in the business and the electric start is a spectacular success. This is exactly what you expect on a premium bike. Honda managed to take the most spectacular arrival of 2017 and up the game. It’s everything it should be and proves that Honda management can move quickly when they want to. This bike proves how badly they want the 450 class.

THE WEEKLY FEED: FACTORY HUSQVARNA CIRCA 1976 and the new URBAN Street machine