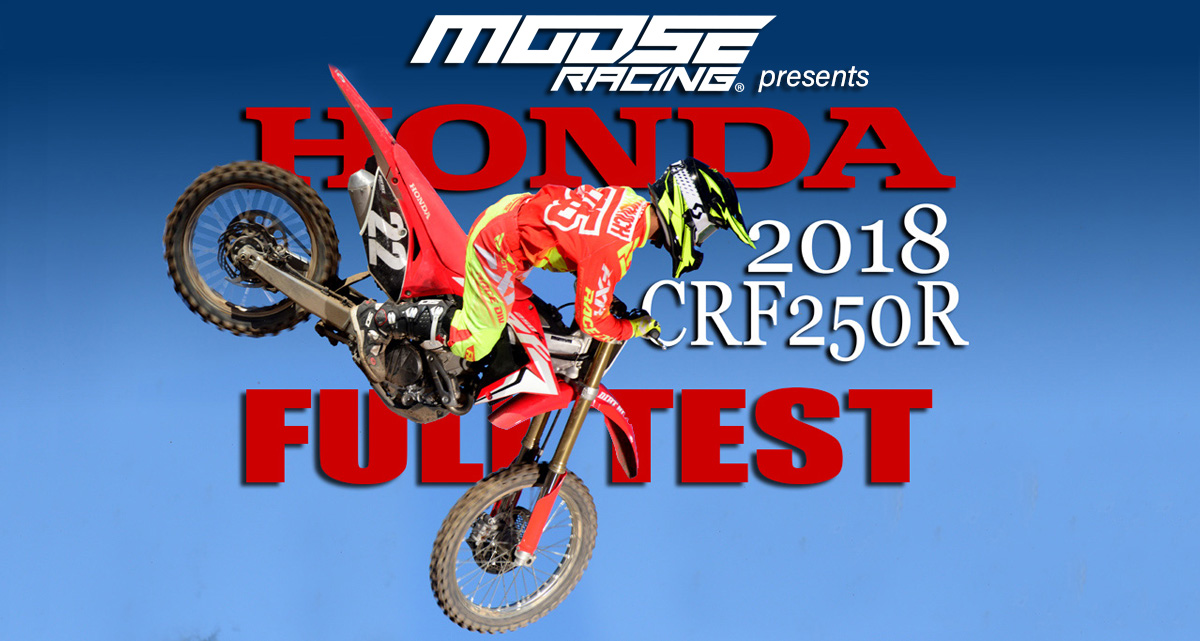 The 2018 Honda CRF250R is one of those rare cases where a new bike actually is new and quite literally redesigned. It isn’t just about a bunch of new parts. The very philosophy that drives the Honda is new and marks a distinct change in thinking. The previous bike had gone through a series of changes since it was introduced in 2004, but the underlying thought was always a little offbeat for a 250 four-stroke motocross bike. It had a single overhead cam motor, a design that favors less weight and more low-end torque. Every other bike in the class had a double overhead cam design for revs. Now the old bike is gone, along with the old thinking, replaced with a new machine that inherits no recognizable features from the past. 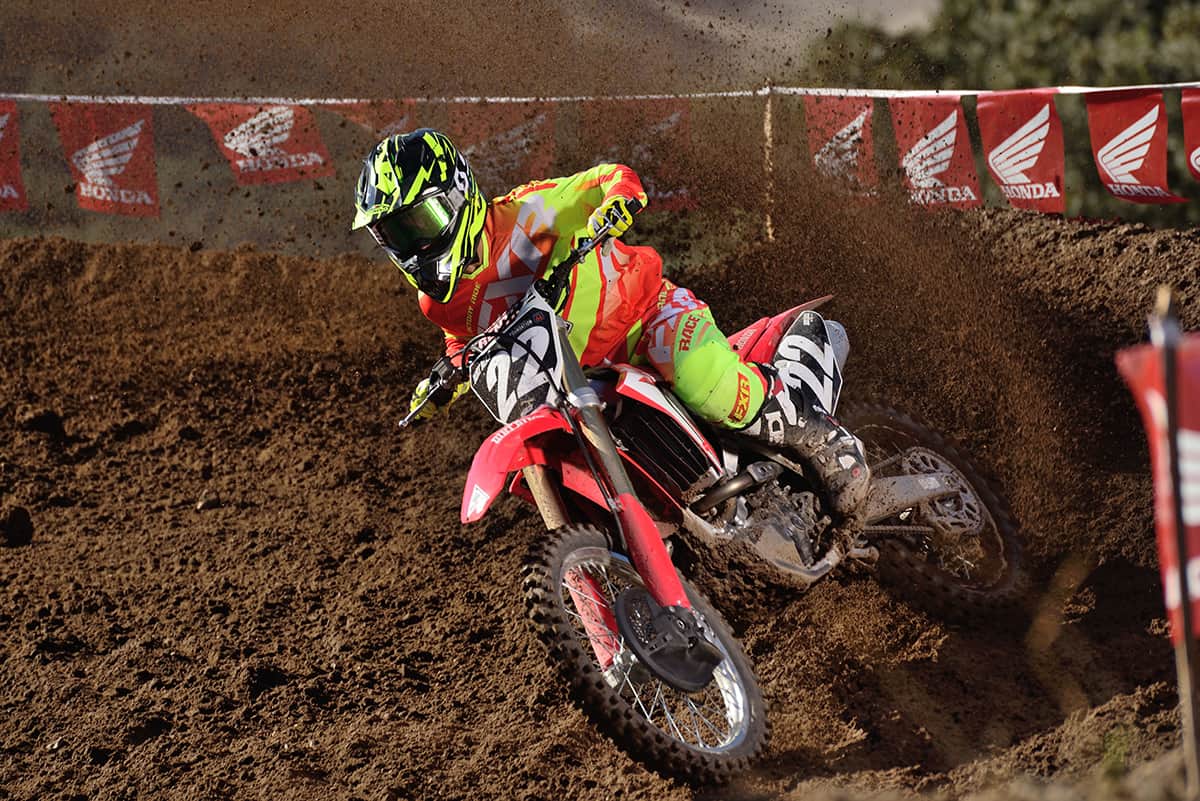 Honda did more than just redesign the CRF250R for 2018. The very design philosophy is new.THE NEW WAY OF THINKING
There are several key areas where the 2018 Honda CRF250R reverses course from the previous one. The first is the valve train. Along with the double overhead cam design, Honda turned to the use of finger-followers. These are tiny levers between the cam lobes and the valves that allow more linear action and eliminate conventional valve buckets. The engineers say that besides making for a lighter valve assembly, this allows more radical cam profiles and, accordingly, the new motor has more lift and duration on both cams. Next, Honda shortened the stroke and increased the bore size substantially. Now the Honda has the shortest stroke of all the 250Fs by a sizable margin. That allows larger valves and lower piston speeds. Then there’s the electric start. Honda went all in by adding the starter motor and removing the kick-starter in one step. There’s no place for a kick-start lever even if you want one. There are other incidental changes caused by the inclusion of a starter motor; for example, the cam chain had to be moved to the other side of the engine. There’s no capacitor to power the EFI system anymore because that function is handled by a lithium battery.
Even though it’s still cable-actuated, the clutch received attention too. It uses two different types of friction plates and five coil springs. The primary gearing is considerably lower, although each gear ratio is taller. Between those two changes and the 13-48 final gearing, the bottom line is slightly lower gear ratios (numerically higher) compared to last year. One idea that Honda is sticking with is the twin exhaust system. The idea behind this is to move the mufflers forward and make them smaller for more centralized mass. There are a couple of added twists this year. It’s not just about two different mufflers; now the left and right sides are completely separate systems, originating from two separate exhaust ports. Honda says that makes for more efficient airflow. Another twist is the fact that there’s a resonator on the right side but not the left. Honda engineers haven’t really explained the logic behind this, but speculation is that it has to do with the fact that most sound tests are performed on the right.
Like the engine, the chassis is all new to the 250 this year, but it reflects many of the same ideas that were introduced on the 450 in 2017. Honda calls this the “Seventh Generation” aluminum frame, and its most distinctive feature is that it routes the engine’s intake flow over the top of the shock. That allows a downdraft intake and a steeper valve angle. It also pushed the top shock mount lower, making for a lower overall center of gravity. Most of the frame geometry is, in fact, identical to the new 450’s, meaning it has a shorter swingarm and a shorter wheelbase compared to last year’s 250. There are also very slight differences in the rake and trail, from 27.4 degrees/118mm to 27.5 degrees/116mm. This year the fuel tank is made of titanium and has a slightly smaller capacity than last year’s.
Another item that represents a big change in philosophy is the front suspension. Honda has officially abandoned the air fork and moved to what it calls an A-kit-style Showa coil-spring fork. This isn’t really an A-kit, of course, which is the term used for works suspension on pro-level bikes. The fork does, however, uses some A-kit design features, like a 39mm piston and a 25mm rod. The shock is new, too, and is located 39mm lower.
One casualty that came with all these changes was weight. The electric starter and the coil-spring fork, in particular, are responsible for making the new Honda the heaviest bike in the 250 class, at 229 pounds without fuel.

PRIMARY MISSION OBJECTIVE ACQUIRED
It’s no secret that the previous model was down on power. As far as peak output is concerned, it wasn’t even in the hunt compared to the KTM. So it’s clear that closing that gap was the primary objective, and that meant the new bike would have to rev. Honda engineers can pat themselves on the back because the new bike is a screamer. It builds more and more power as the revs climb to a peak that’s as high as anything in the class. The bike hits the rev limiter somewhere before 15,000 rpm, but by then it’s made enough power to walk away from the 2017 model as well as most other bikes in the 250 class. It isn’t just about revs, either. Honda has given the bike a very responsive, willing-to-go nature that doesn’t show up on a dyno chart. When you open the throttle on the Honda, even in neutral, it responds right now, without any engine drag or hesitation. That’s the nature of short-stroke motors, but Honda also nailed it with the EFI settings, crank weight, friction loss and all the other factors that translate into an instant-on feel.
As you might expect, the new Honda’s low-end power isn’t anything special. That might be bad news for some riders, because that’s one area where the 2017 model really excelled. On the track, though, most riders never got to use that low-rpm torque. It was so far down in the basement that you would blast through that zone without even noticing it. No 250 four-stroke has enough torque to allow a rider to linger around 6000 rpm, not even the 2017 Honda. The 2018 model’s working range is from about 9000 rpm up. Unlike the KTM, the new Honda encourages you to shift before you hit the redline. It makes its peak power well before the electronic rev limiter puts an end to things, and, as a result, you aren’t doing the high-rpm stutter as often.
If you’re used to the old Honda, it takes some time to adjust to the new powerband. You upshift later and downshift sooner. The powerband is actually broader than it used to be, simply because the bike gained so much rev on top, but if you attempt to torque your way around the track, you’re just wasting your time. The Honda rewards those who are aggressive.

IS THIS A HONDA?
There’s a very big difference in the way the new CRF handles too. It used to feel light and twitchy, but now it’s more planted and stable. The CRF feels like a big bike for a 250. Even though it’s shorter and narrower than it used to be, the CRF has a long, big-ship feel. On most tracks, that’s a good thing. It’s very stable in rough stuff, and the front end tracks much better. The older machine had a tendency to wander around, especially when there were criss-crossing lines and small chop. The new bike holds its course well and makes its own traction. It does, however, feel heavier. Honda lost a little of that lighter-than-air feeling that it was known for. The bike is around 10 pounds heavier than the lightest machines in the 250 class, and that fact doesn’t escape unnoticed on the track. We wouldn’t say that it’s a real handicap, but the extra pounds are undeniable.
In the fork department, we’re okay with the extra weight. We made due with the Showa triple-air SFF fork on the old bike, but we never really liked it. The three separate air chambers were complicated, and we never seemed to finish dialing it in. Having a coil-spring fork makes life so much easier. The bonus here is that we like the fork as delivered! With all the test time in the world, we could never get the air fork to work this well, particularly on small curbs and holes. On smoother tracks, most riders left the settings alone, but some required a little more compression damping, particularly for jump landings. The rear end was a little trickier. At first, it seemed to unload too much when braking for turns, making the front end feel divey. It turned out that most riders preferred less shock spring preload than usual. Rather than set the sag around 100mm, it worked best at 108mm or even more. Then you could calm down the rear with some additional high-speed compression damping, from 1/4 turn to a half. Once you dial in the Honda, you can forget about it. We love that.

NEW GAME
In recent years it seems like we’ve seen a lot of new bikes that weren’t really new. There were updates, refinements and improvements, but nothing that really pushed the whole sport of motocross forward. The Honda breaks that tradition. It’s a new bike and a new way of thinking for Honda, and it will change the status quo. It’s faster and has better suspension than its predecessor, and it’s clearly more of a pro-level bike. Will that put it on top of the 250 class? That’s a question for next month’s 250 shootout.