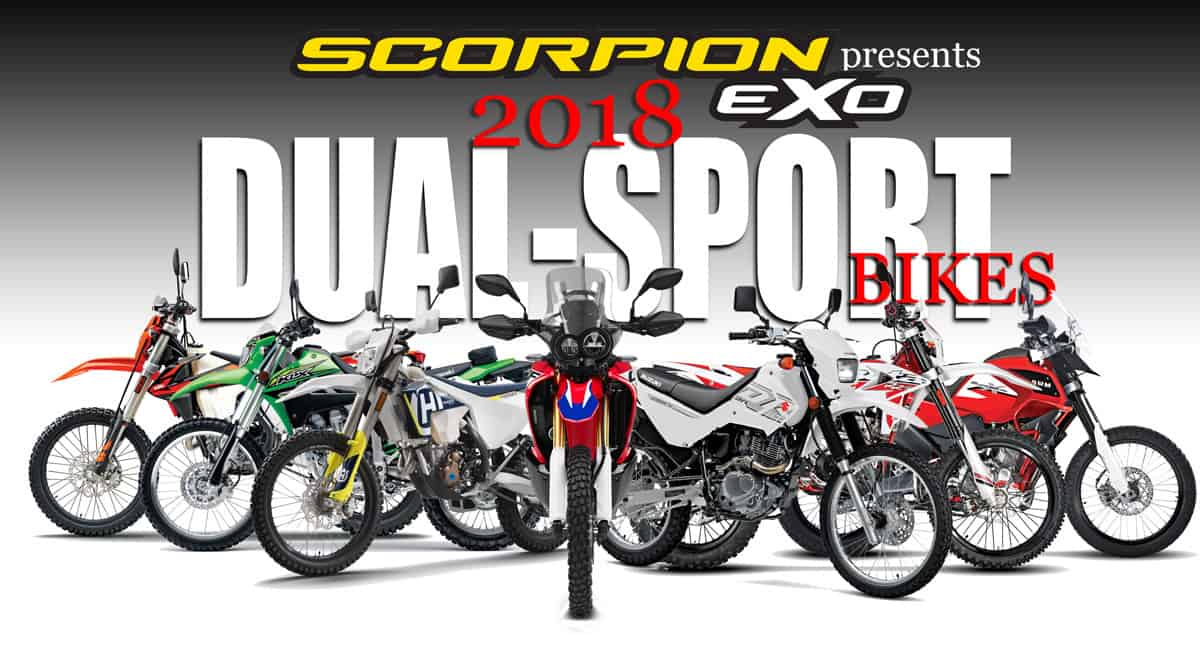 Dual-sport bikes have taken on increased duties in recent years. Many manufacturers have dropped dedicated off-road bikes and instructed their dealers to steer buyers toward dual-sport models. That’s because U.S. federal law now has requirements that off-road bikes pass noise and emissions regulations that are almost as strict and just as costly for the maker. This buyer’s guide deals only with federally approved models. For other Dirt Bike Magazine Buyer’s Guides, click here. For the 2019 Dual-Sport Buyer’s Guide, click here. 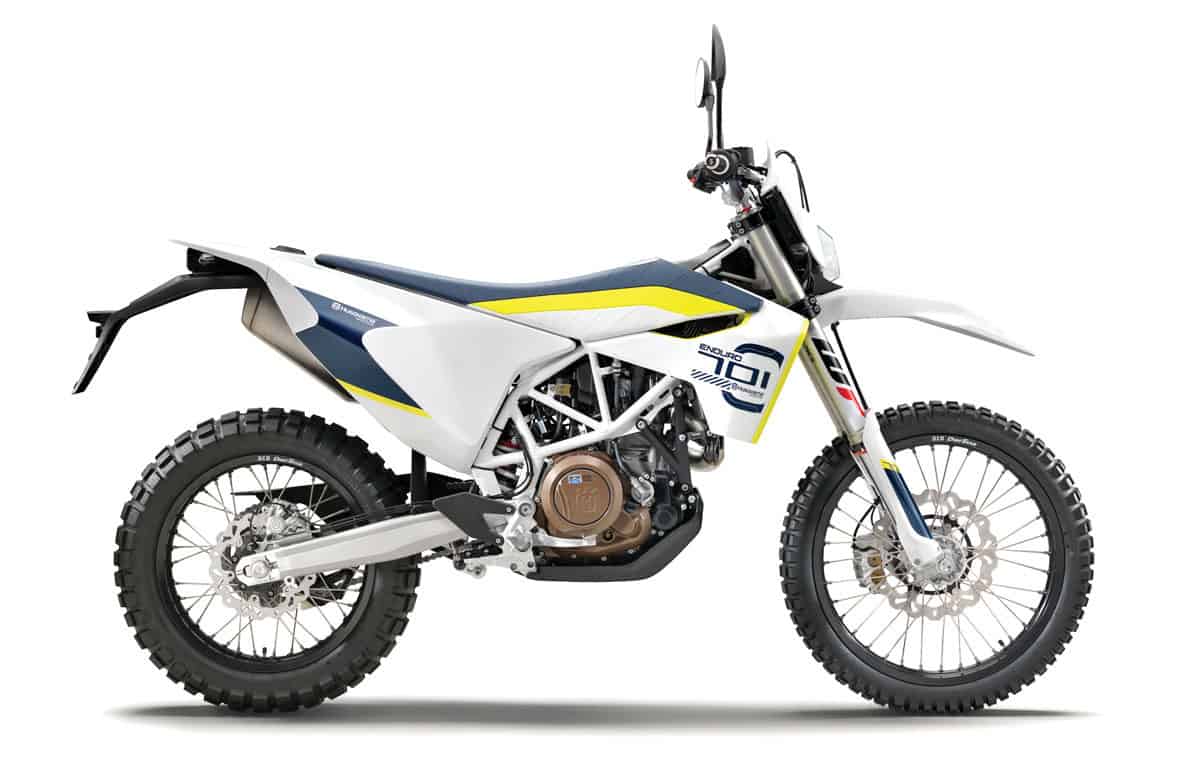 HUSQVARNA 701 ENDURO: $10,999
This is one of the most powerful single-cylinder motorcycles ever made. The Husqvarna 701 has a mauler of a single OHC motor with a fly-by-wire throttle and downdraft EFI system. The bike is large, but the overall height is reasonable with the fuel tank under the seat. It has linkage rear suspension and a WP Split fork. The Husky 701 is very similar to the KTM 690 Enduro. 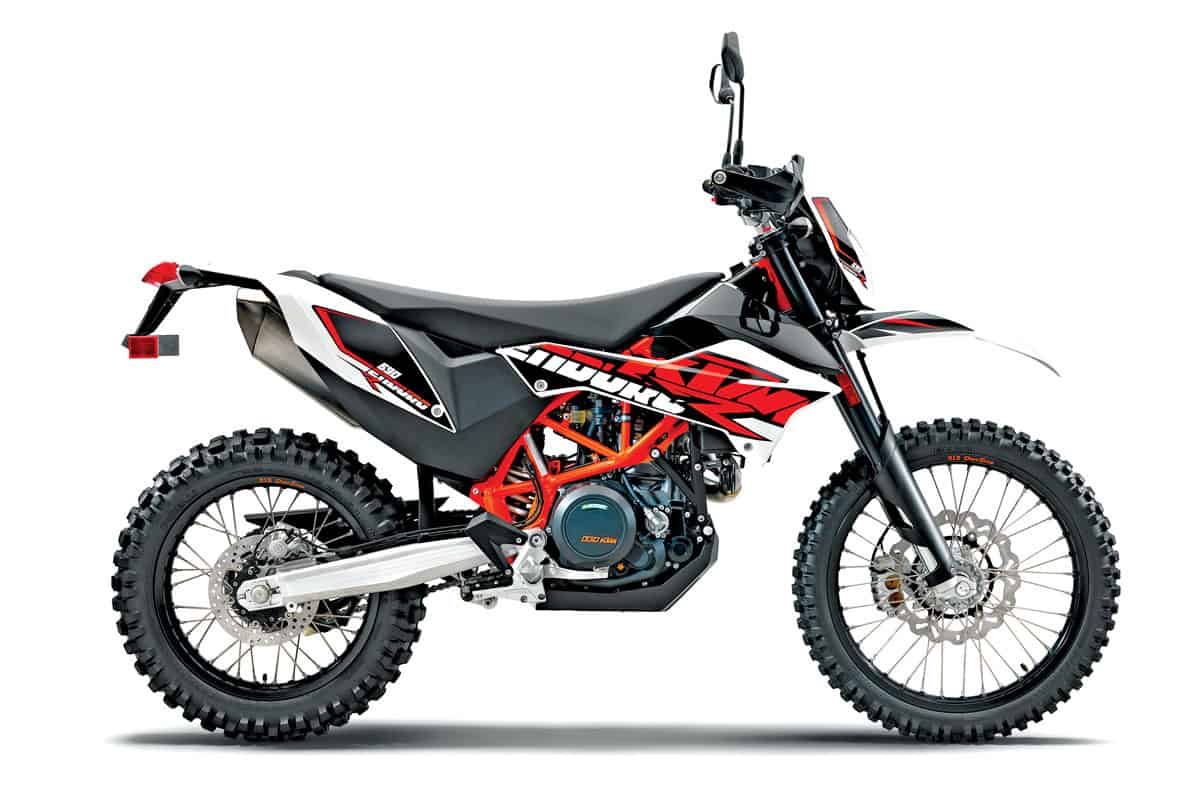 KTM 690 ENDURO: $10,899
KTM made no changes to its flagship dual-sport bike for 2018. It shares the same motor and chassis with the Husqvarna 701 Enduro, so it, too, is an incredibly powerful motorcycle. The motor in KTM’s own Duke street bike might be the only single with a higher horsepower rating. The trellis frame is unusual in the off-road world, but the bike is legitimately dirt-worthy. 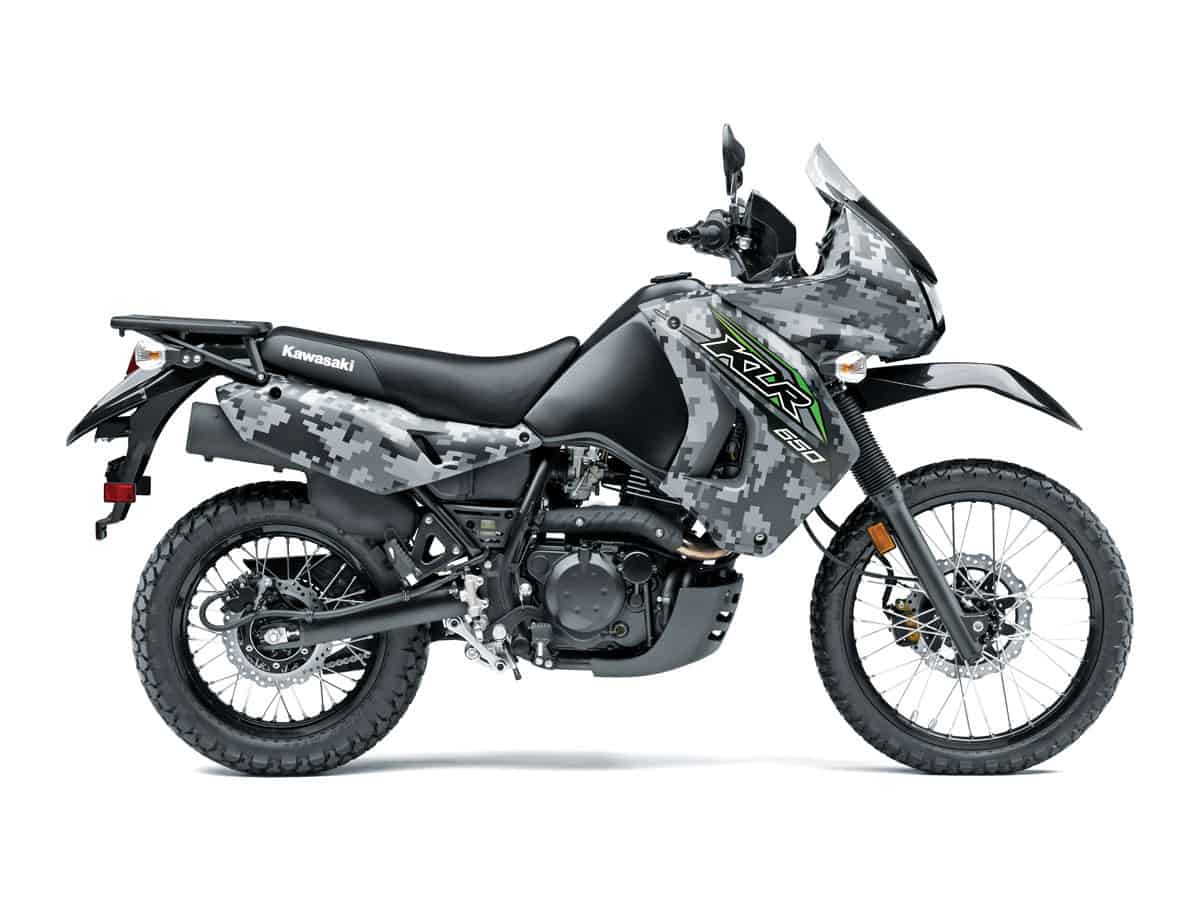 KAWASAKI KLR650: $6699
In 2008 Kawasaki redesigned one of the oldest motorcycles in its line in a last-ditch effort to rekindle interest. In doing so, the company created an icon. The KLR goes back to 1987, but the present formula, with its large fuel tank, frame-mount fairing, sturdy luggage rack and affordable price is what makes it the most successful dual-sport/adventure bike ever. For the camo model, the price is $6999. 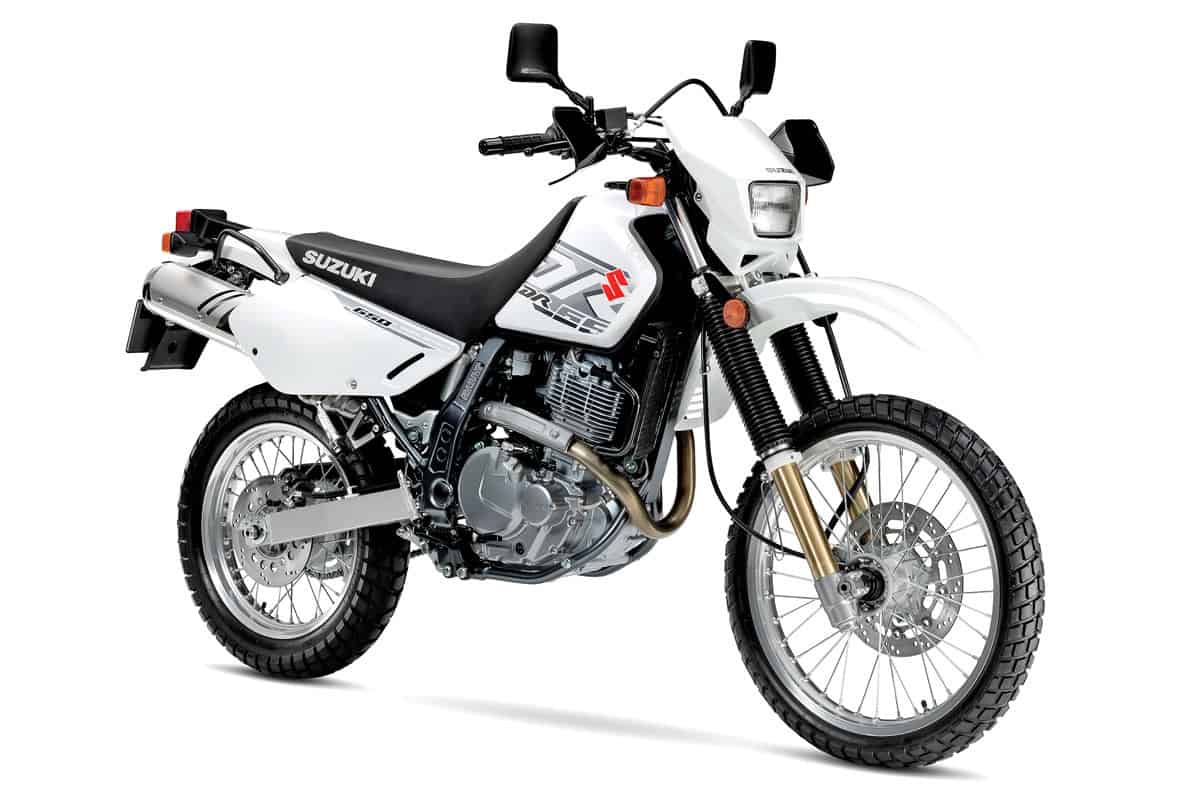 SUZUKI DR650S: $6549
Suzuki’s DR650 is a classic in its own right, with a large and feverishly devoted group of followers. Like the Kawasaki KLR, the Suzuki has old-school technology, but it’s generally considered a more capable performer because of a slight advantage in power and weight. The Kawasaki, on the other hand, offers more fuel range, luggage capacity and wind protection. 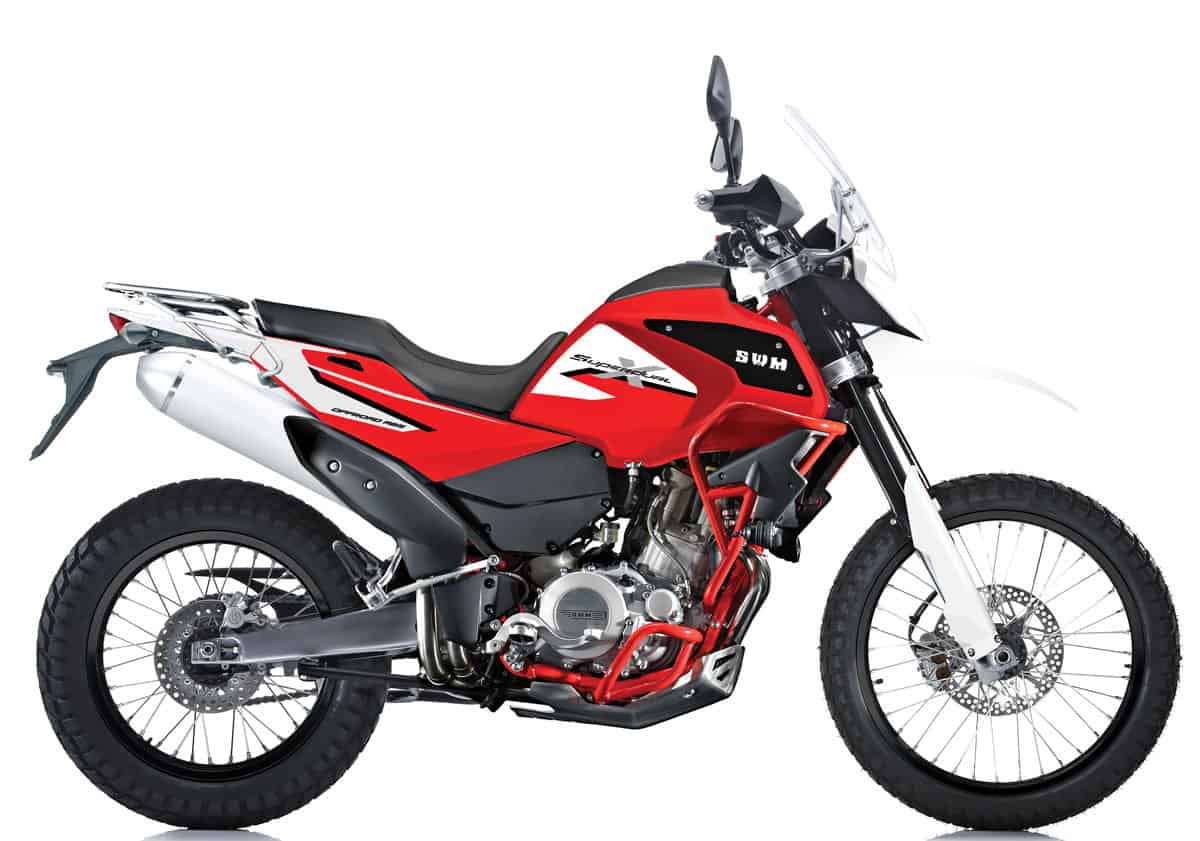 SWM SUPERDUAL 650: $8995
This bike is the reincarnation of the original Husqvarna 510 four-stroke that was developed in Sweden back in 1984. The motor can be traced back that far, although every part has been redesigned many times over. Today, it’s manufactured in the same Italian factory that once produced Husqvarnas, and the bike is now aimed more towards adventure riders. 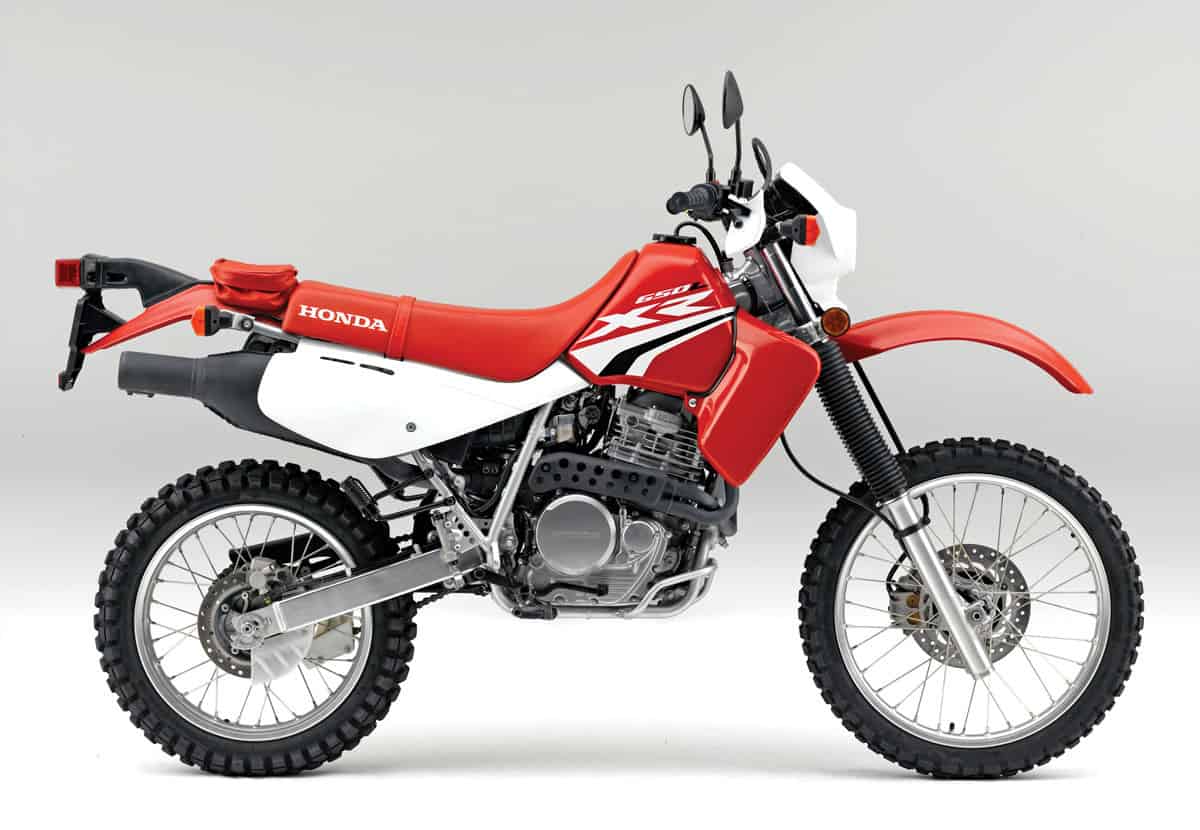 HONDA XR650L: $6899
Of the three Japanese 650cc dual-sport bikes, the Honda is by far the most dirt-worthy. The air-cooled, electric-start five-speed has gone almost unchanged since its introduction 27 years ago, and the bike has a very old-school layout. Its suspension is still very good off-road, although the XR is very heavy and somewhat underpowered by modern standards. 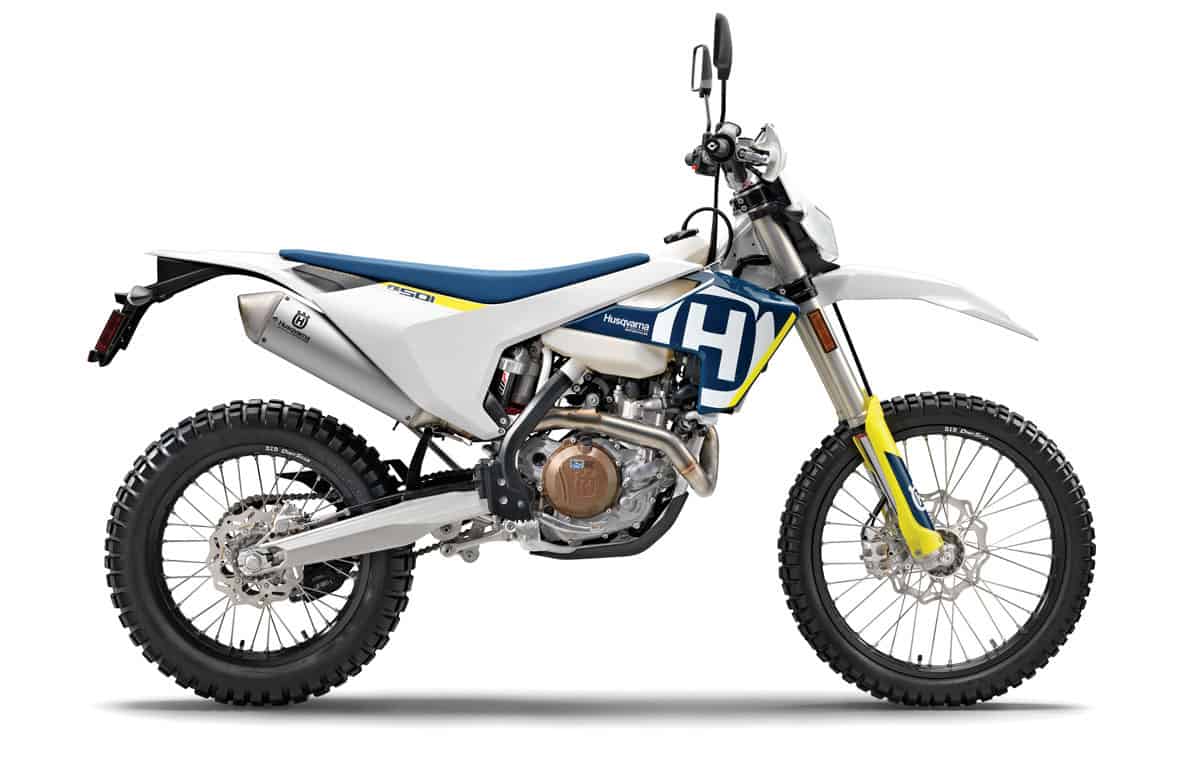 HUSQVARNA FE501: $11,099
In the old days, Husqvarna was so small its dual-sport line could fly under the EPA’s radar in America. Not anymore. The new Husky 501 meets or surpasses every standard the U.S. government could throw at it, and it’s still an outstanding off-road bike. The FE501 is very similar to the KTM 500EXC-F but has linkage rear suspension among other differences.

BETA 500RR: $9999
This small Italian company is going up against the KTM group for ownership of the hard-core dual-sport world. Of Beta’s four dual-sport bikes, the 500 is the largest. All of them are based on the same chassis and motor, but they have very distinctive personalities. All have lost weight this year and are electric start only. 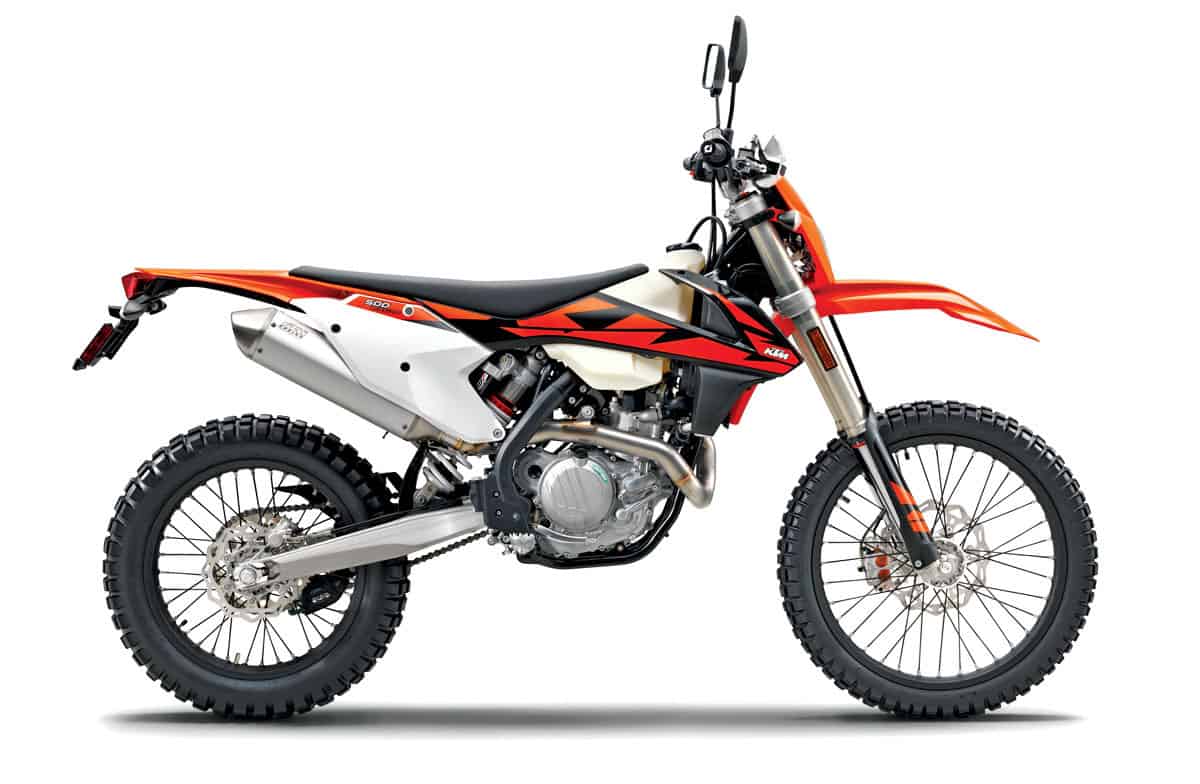 KTM 500EXC-F: $10,999
The KTM dual-sport flagship received a new motor last year with a number of measures to make it whisper quiet with very little loss in performance. Among them are a reed valve in the intake boot and Continental TKC 80 tires. The EXC is so dirt-oriented that KTM doesn’t bother offering a 500cc off-road bike of any kind. 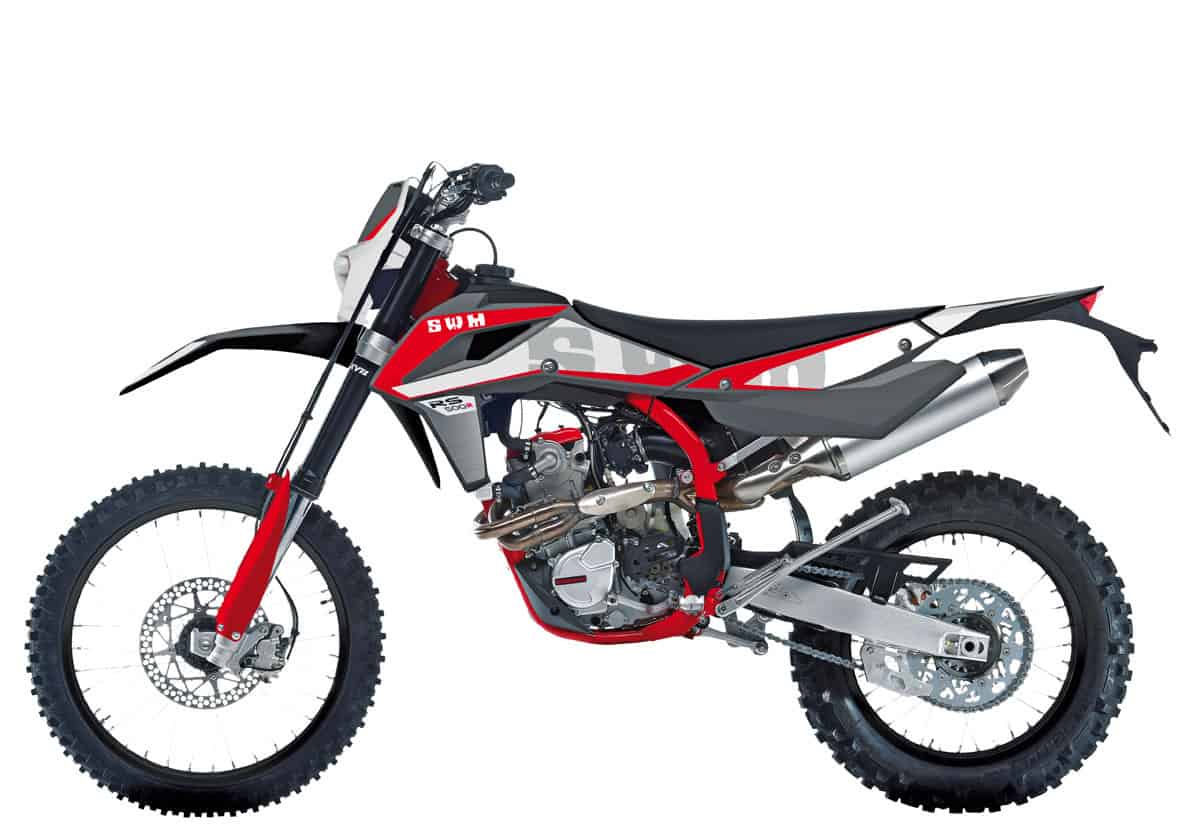 SWM RS500: $7795
Five years after the KTM buyout of Husqvarna, the former Husky factory in Italy is now producing motorcycles under the SWM name. The RS500 is based on the 2007–2010 Husqvarna TE500. That bike gets the credit for being the first of today’s hard-core dual-sports. Regulations are tighter now, but the RS is still very capable at a price that’s thousands less than a KTM. 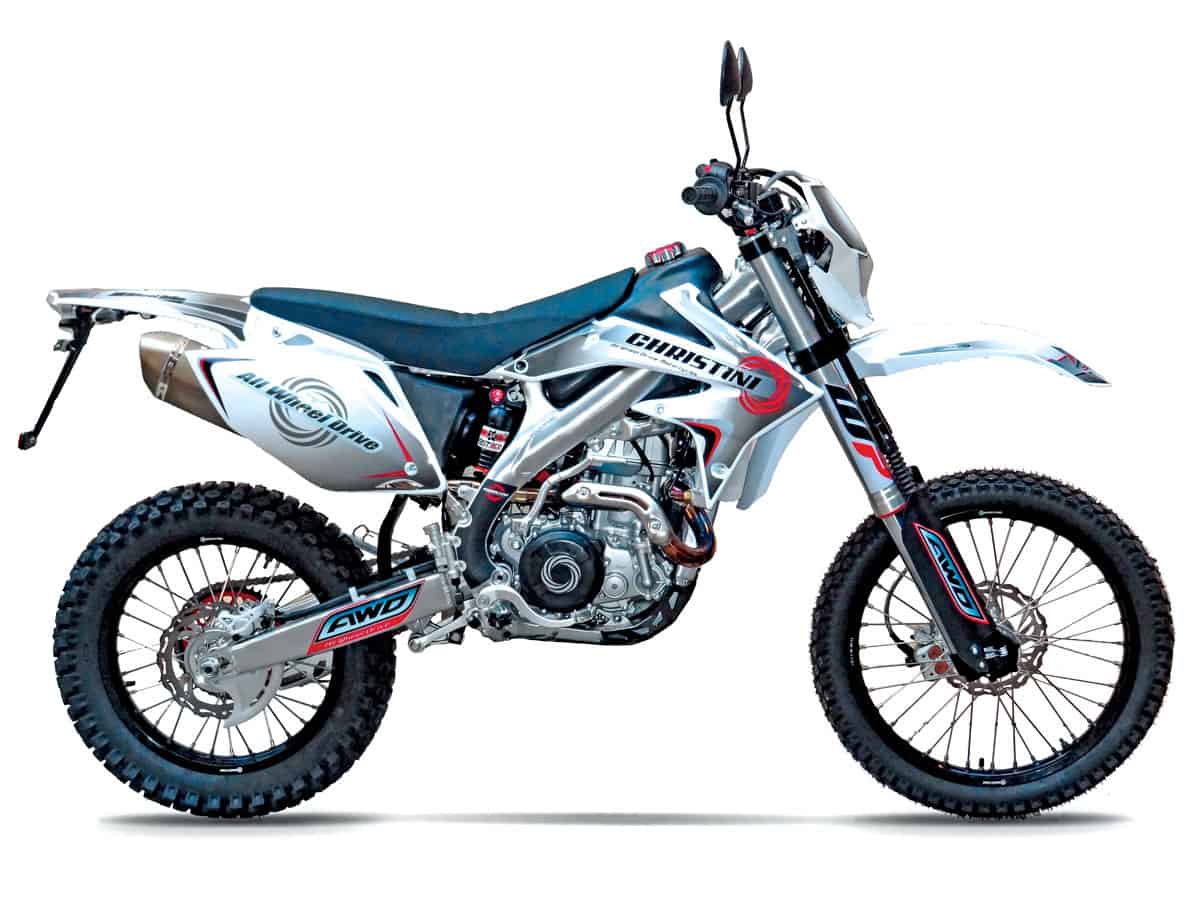 CHRISTINI AWD 450DS: $9195
Christini’s all-wheel-drive system uses telescoping drive shafts to power the front wheel at a reduced speed so that it only engages when there’s wheelspin in the rear. The 450 has an Asian-made engine and chassis that bear a striking resemblance to the Honda CRF450X’s, but it has fuel injection, WP suspension and Christini’s U.S.-engineered AWD system. 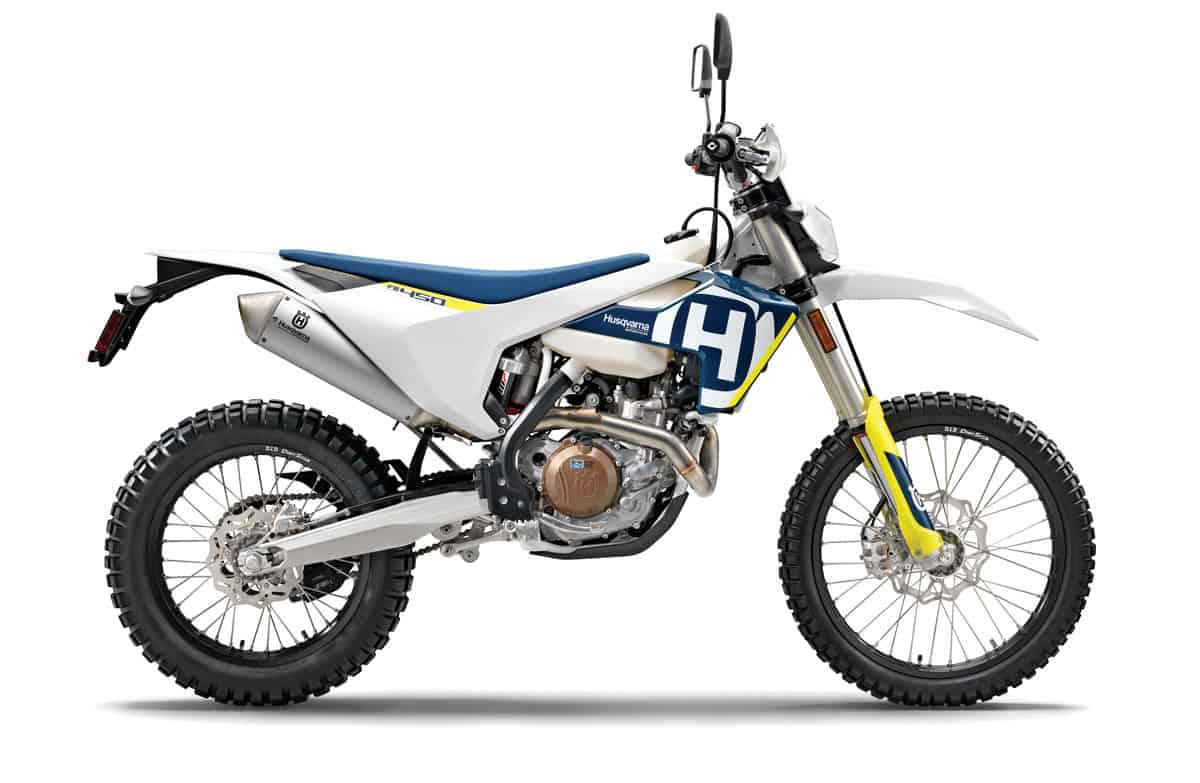 HUSQVARNA FE450: $10,899
Those who complain about the similarities between Husqvarnas and KTMs have nothing to say about this bike. The Husky FE450 dual-sport is exclusive to Husqvarna; there’s no corresponding KTM in the 2018 model line. Its performance is comparable to any full-time off-road 450’s, but it’s fully compliant with DOT and EPA rules in all 50 states. 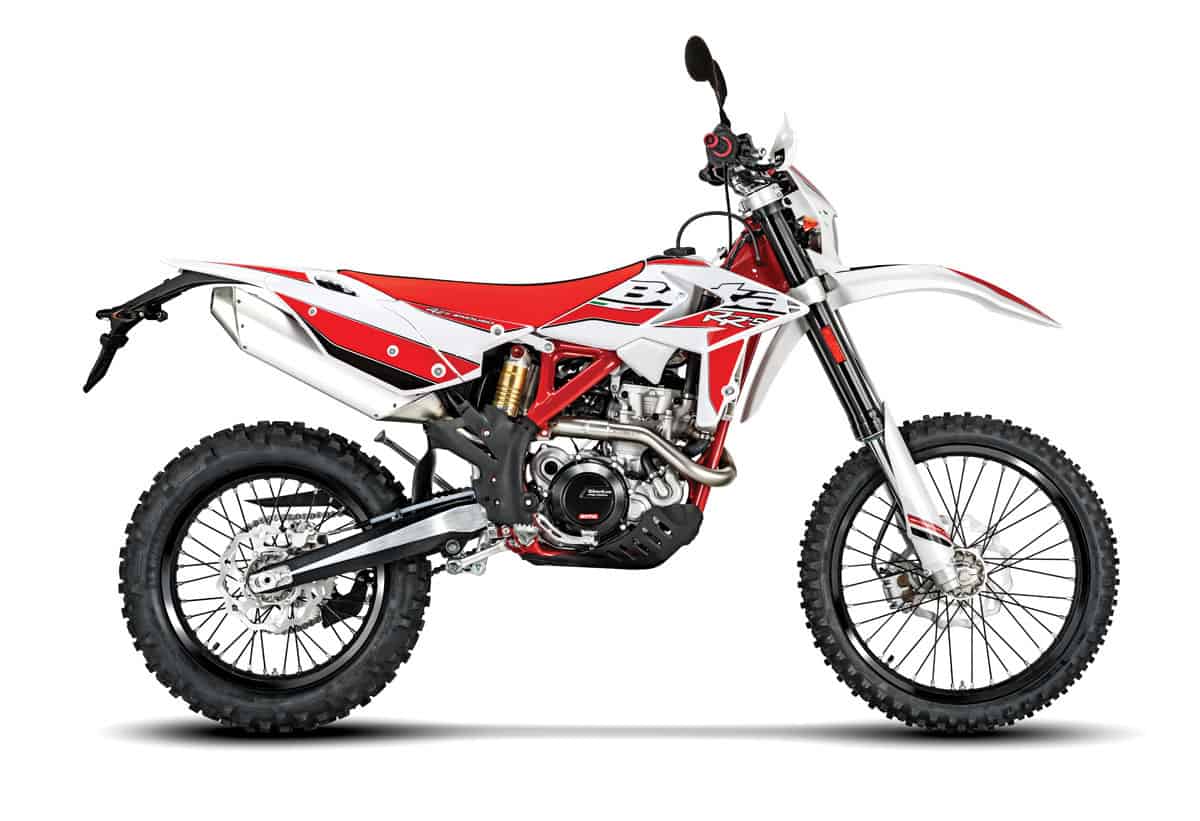 BETA 430RR: $9899
To create the 430RR, Beta started with the same chassis and motor platform used in the 500RR but decreased the bore 5mm. That resulted in a very different personality. The 430 is still a very dirt-oriented motorcycle that just squeaks by sound and emission regulations under rules that are more relaxed for small manufacturers than for big makers like KTM and Honda. 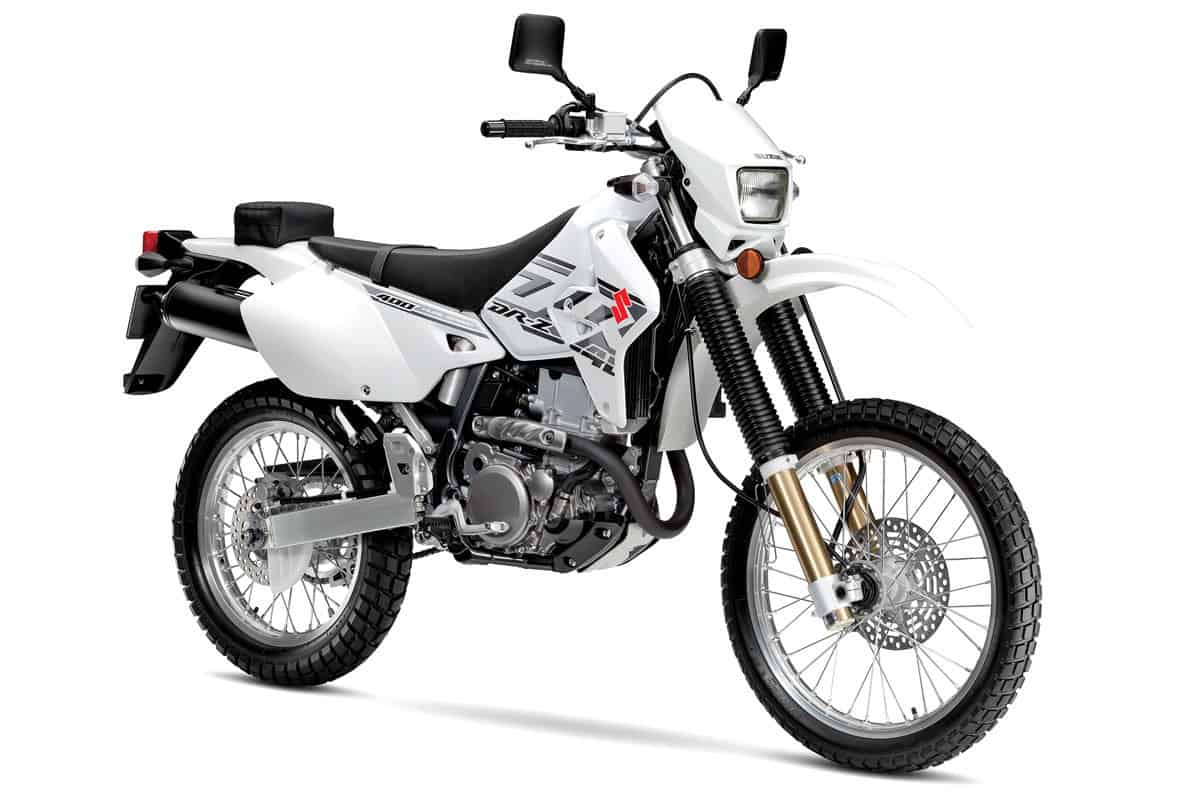 SUZUKI DR-Z400S: $6699
The Suzuki DRZ400 is priced just a little higher than its big brother, the DR650, because it’s a more modern motorcycle and much more capable in the dirt. Still, the DR-Z has gone nearly unchanged for 18 years and is dated compared to the more expensive, hard-core dual-sport bikes from KTM, Husqvarna, Beta and now SWM. 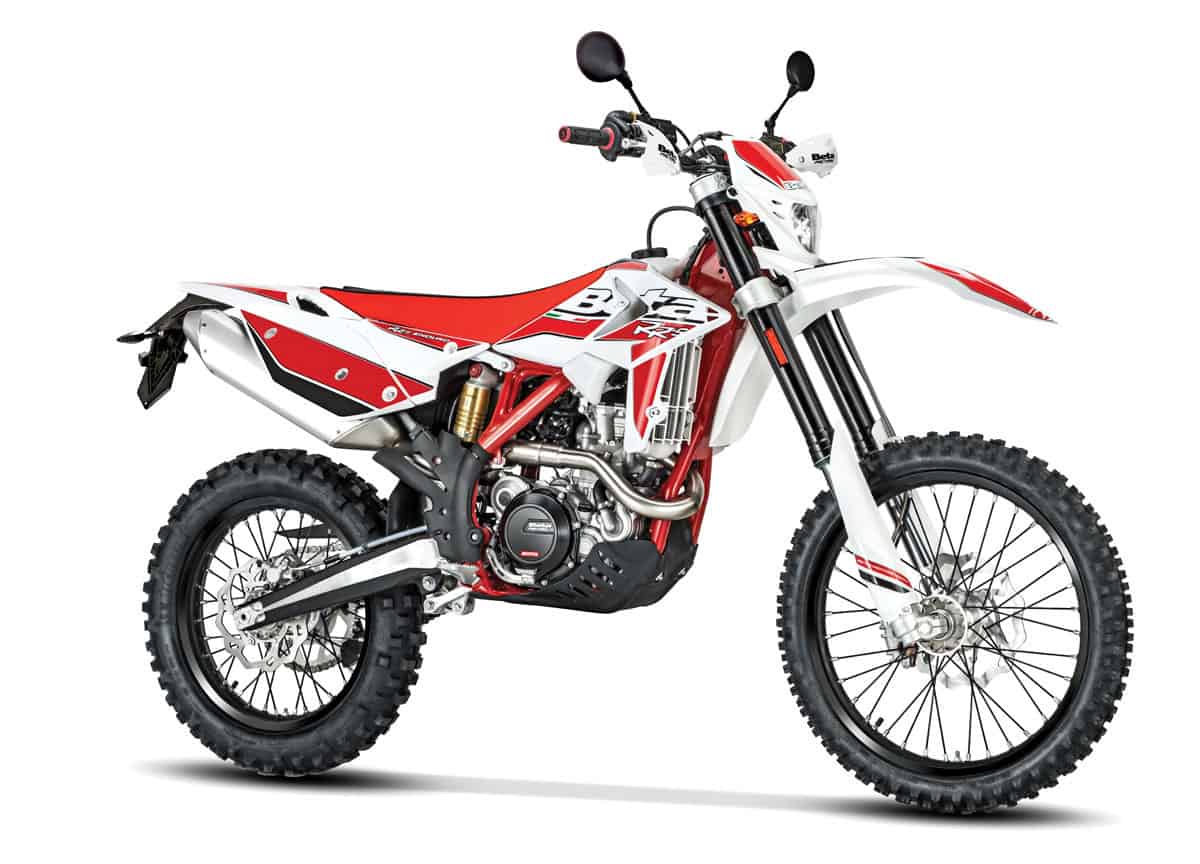 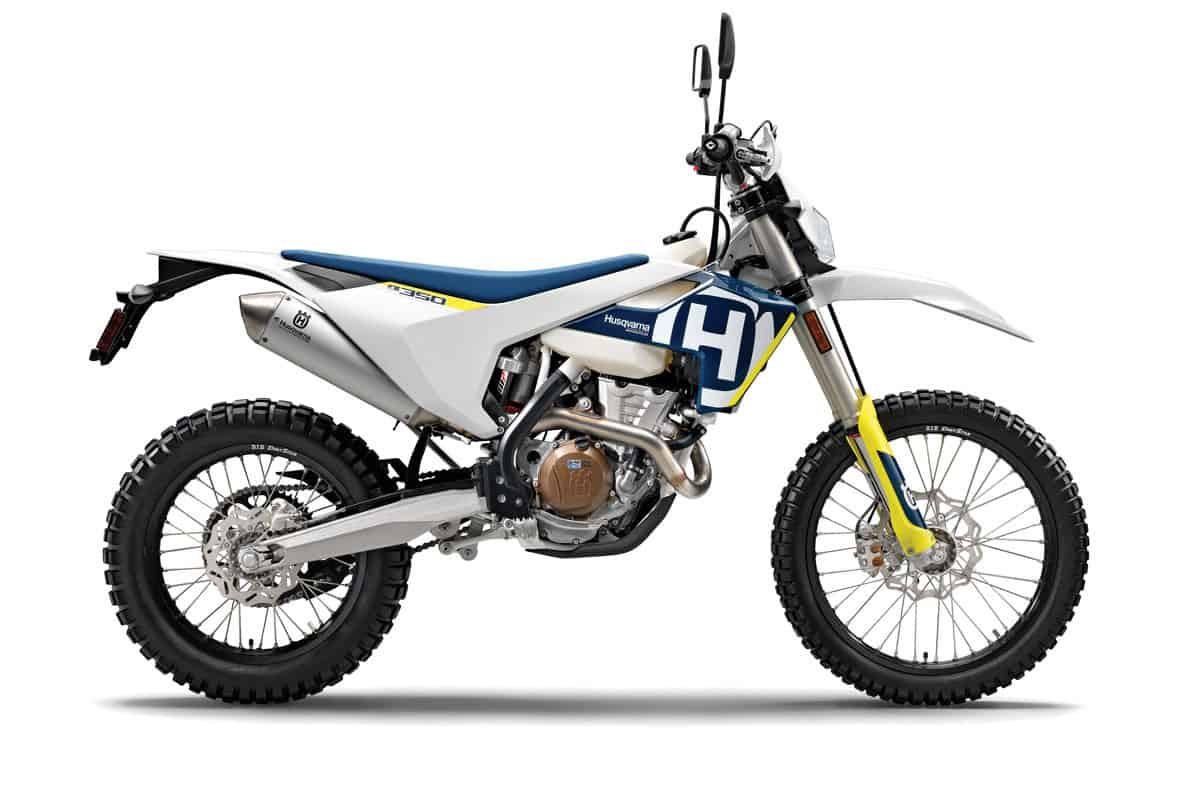 HUSQVARNA FE350: $10,699
Of all the street-legal dirt bikes that we label “hard-core” dual-sport bikes, the Husky 350 is among the most capable in the dirt. It still meets all the federal and state specifications to be legal, but the FE performs well enough to ride any off-road race in the country without modification, aside from tires. Further modification is, in fact, quite difficult by federal mandate. 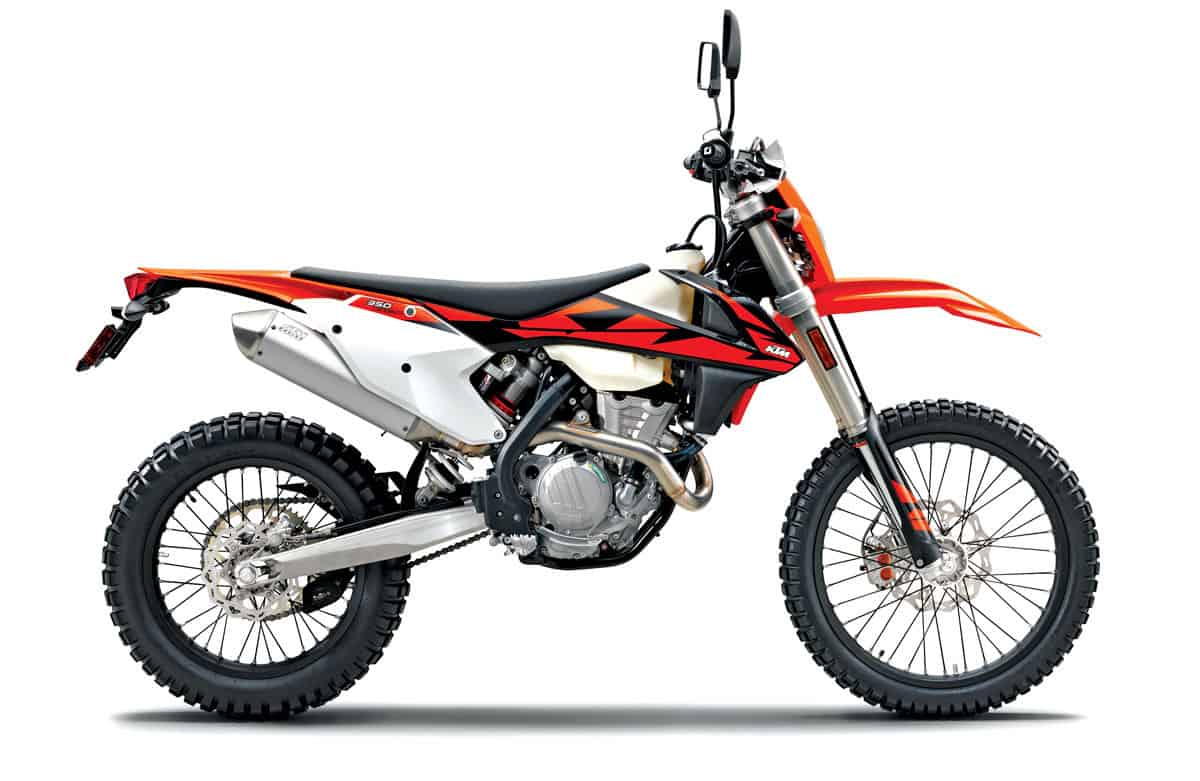 KTM 350EXC-F: $10,599
Interestingly enough, this dual-sport bike is the basis for Cody Webb’s EnduroCross-winning race bike. Extreme enduro riders love it because it has PDS rear suspension without linkage. That gives it more ground clearance. KTM’s competition-oriented 350XCF and even the Husqvarna FEs all use shock linkage. The stock 350 is limited by its DOT tires. 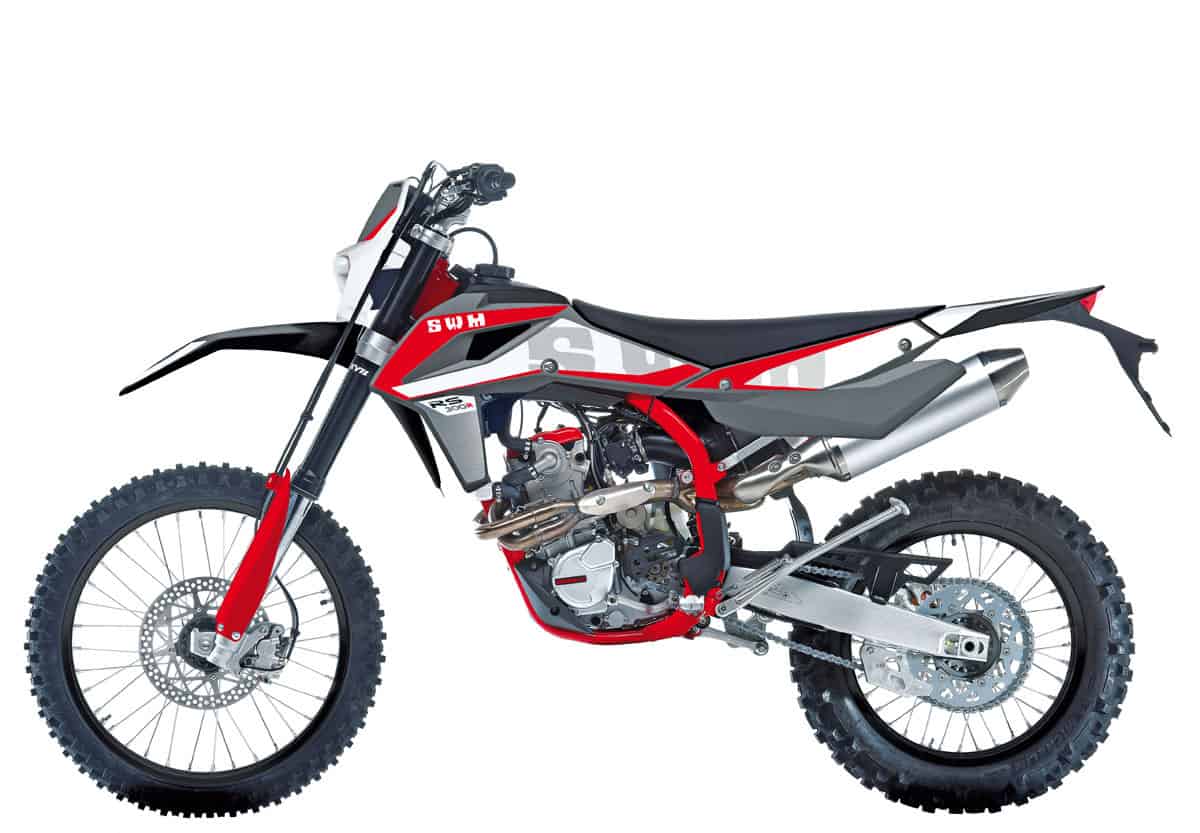 SWM RS300: $7495
This is another of the bikes that was originally designed by Husqvarna in the days before KTM. It’s very similar to the SWM RS500, but with a smaller bore and stroke, and it isn’t related to the Husqvarna 310 that was introduced in the days of BMW’s ownership. The SWMs have only recently passed through U.S. testing and should be available mid-winter. 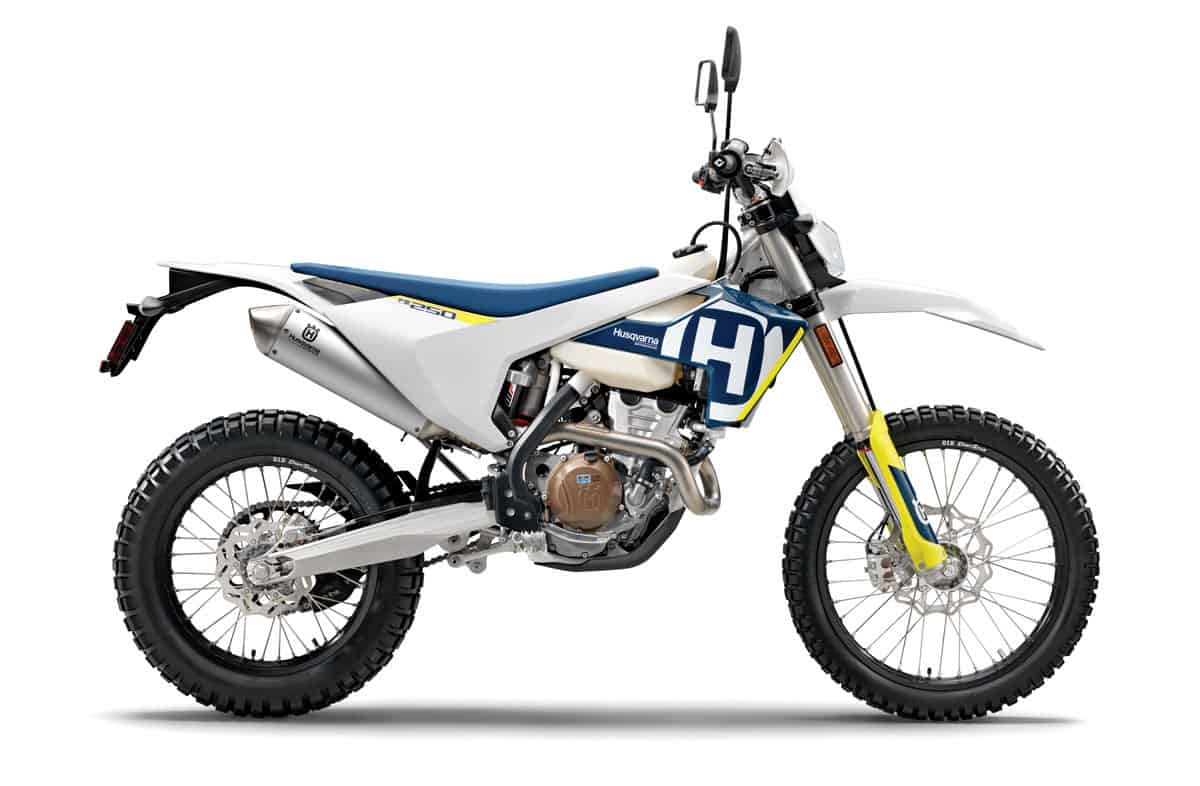 HUSQVARNA FE250: $9699
If you want a Husky 250F off-road bike, this is your only choice. Husqvarna offers the FX450 and the FX350 for off-road racing but doesn’t make an FX250. The dual-sport version is capable enough to fill that role. It has linkage suspension and the open-chamber WP Xplor 48 fork. The motor isn’t that different from the FC250 motocross bike’s but is fully EPA compliant and very quiet. 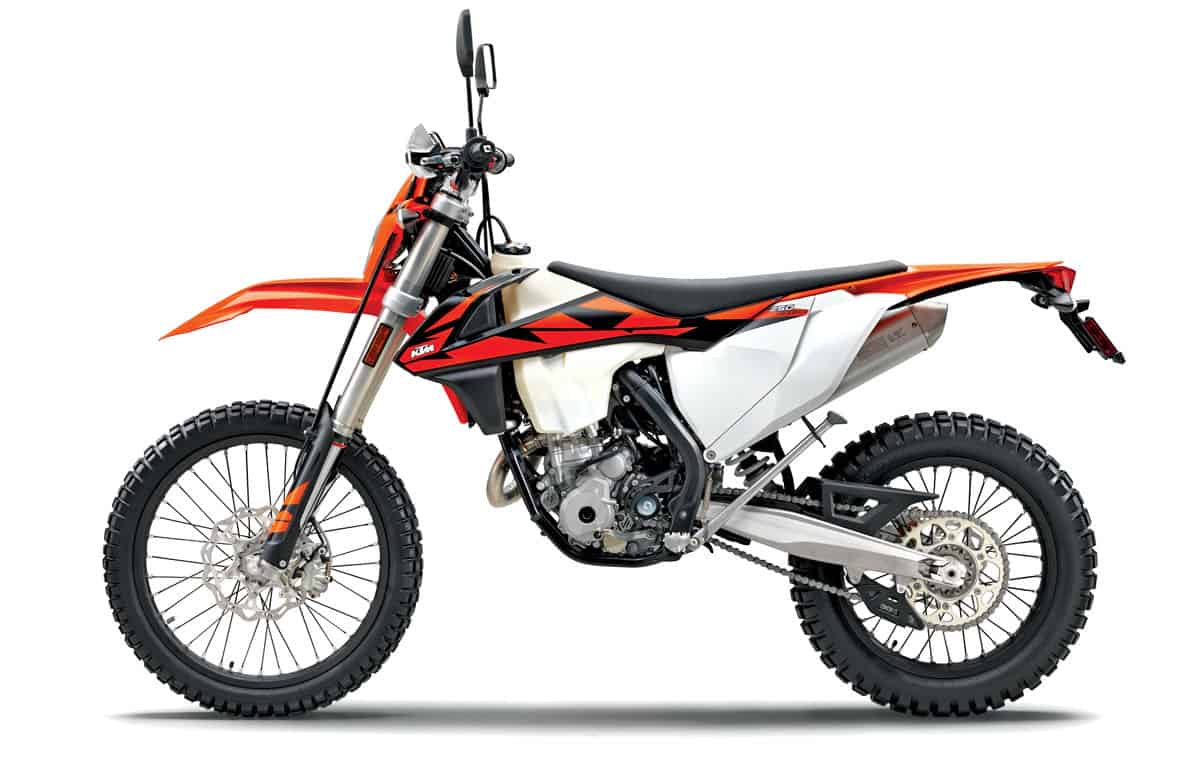 KTM 250EXC-F: $9599
KTM’s smallest dual-sport bike is similar to the FE350 but feels smaller and lighter. This machine is 90-percent dirt bike and feels somewhat out of place on the open highway. The horsepower level is excellent if you rev it, but most riders might look for modifications to get just a little more torque. That process is made very difficult by strict regulations. 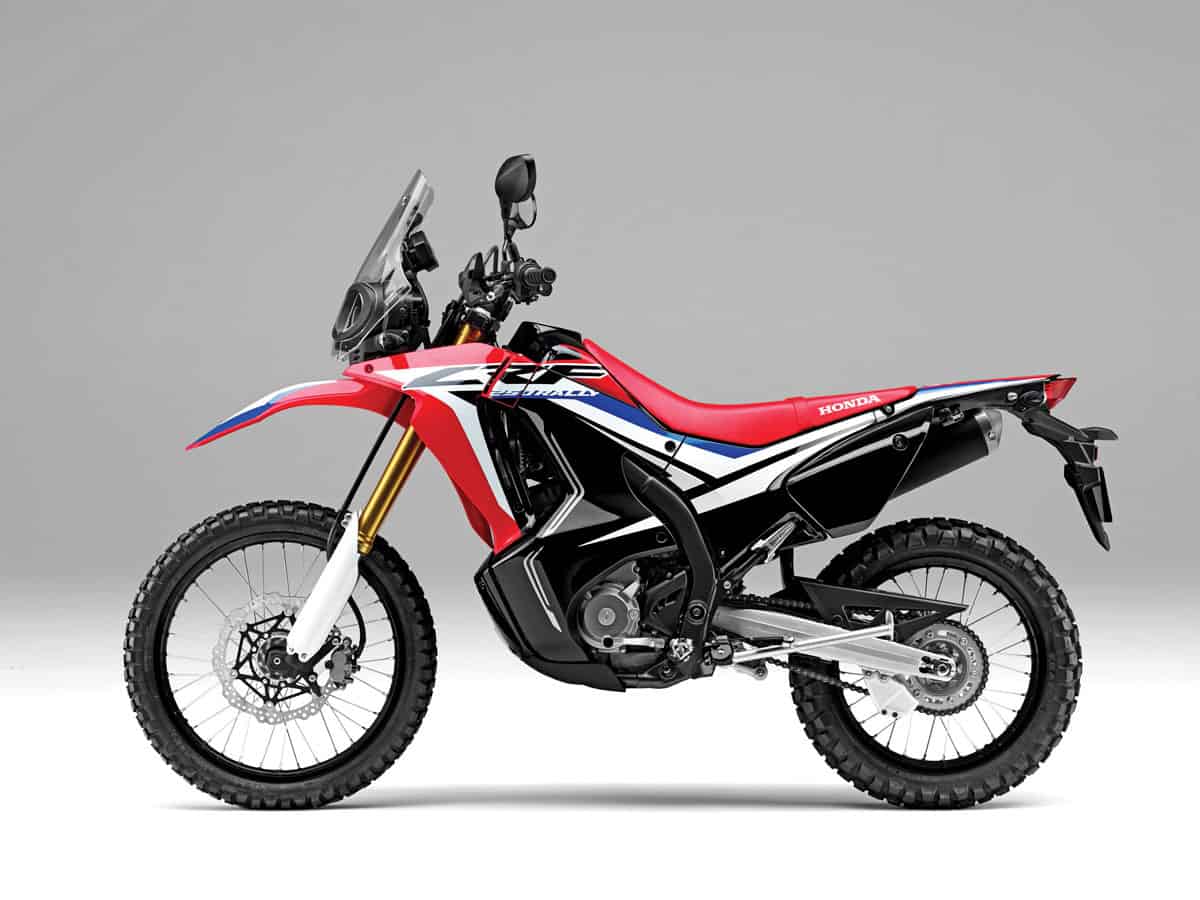 HONDA CRF250L RALLY: $5899
Honda did an amazing job of remaking the CRF250L into a little rally bike and keeping the price down. Under the new adventure bike fairing, it’s essentially the same budget-minded, Thai-built entry bike. Its appearance is so good that it’s easy to oversell the performance. It is very mild in both motor output and suspension. 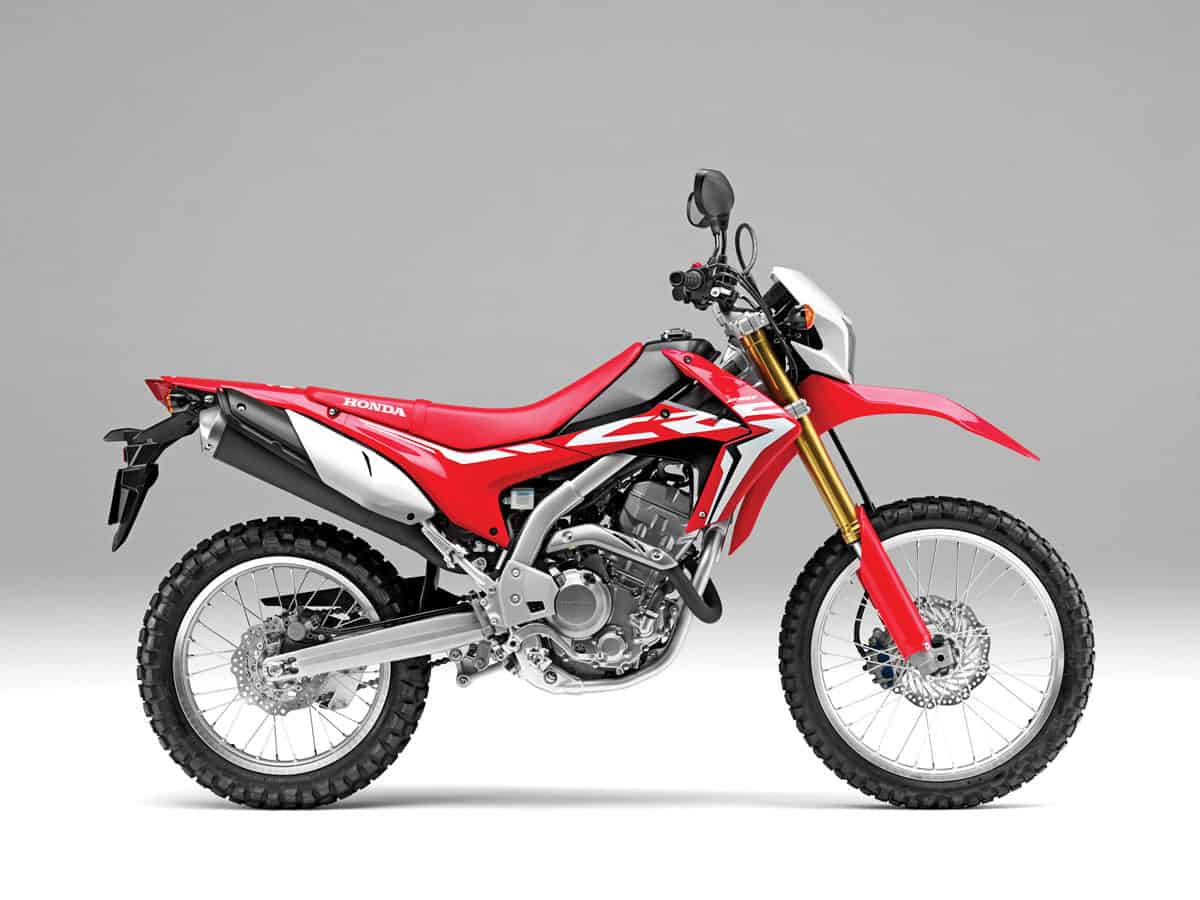 HONDA CRF250L: (2017) $5149
In terms of value, the Honda CRF250L is an amazing machine. It’s manufactured in Thailand to keep the price down, but the workmanship is clearly up to Honda’s standards. The power and suspension are nothing to get excited about, and dirt excursions should be limited to flat trails and dirt roads. On the street, the bike is smooth and comfortable. 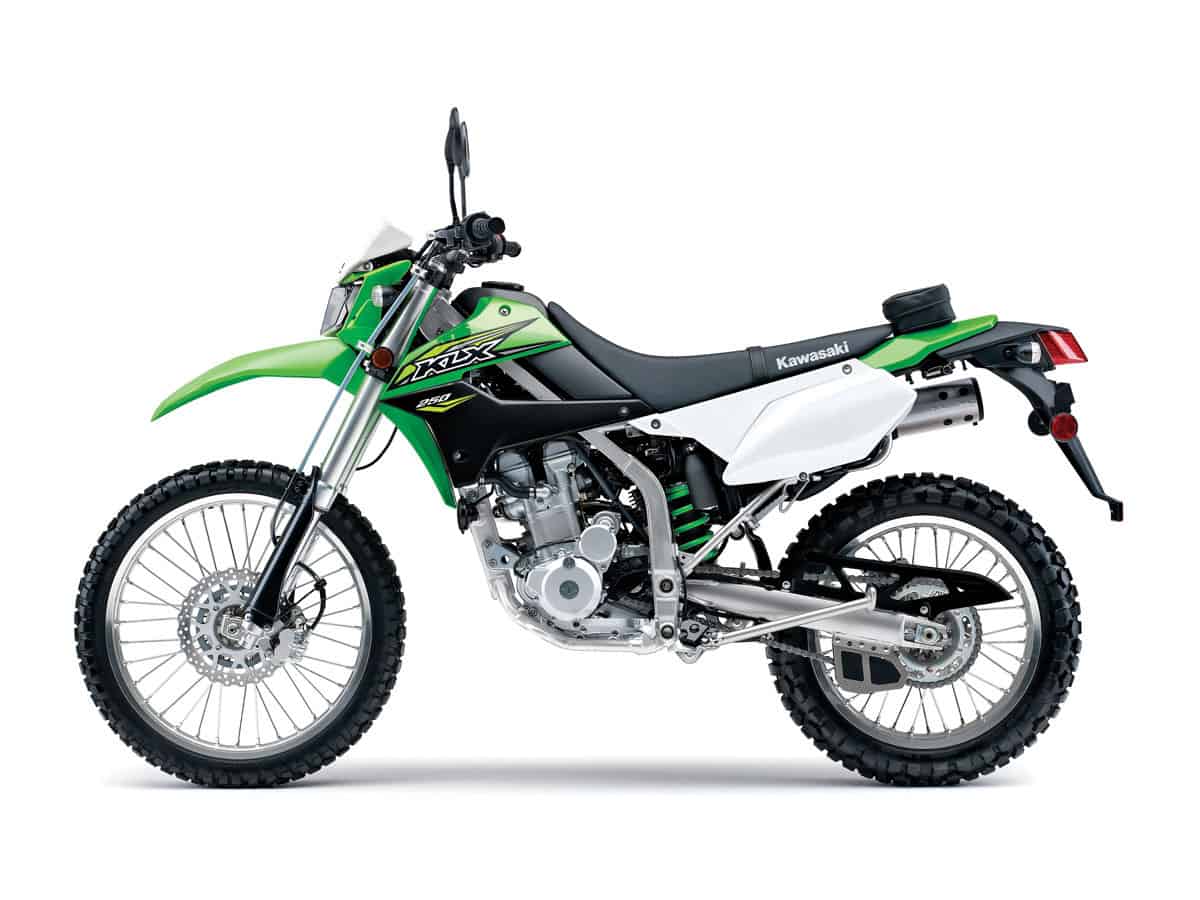 KAWASAKI KLX250: $5349
This bike vanished from Kawasaki’s lineup back in 2014. When it came back, it was fuel-injected but otherwise the same. The bike is moderately dirt-worthy as entry-level 250s go. It trumps the Honda in suspension and lighter weight, but neither bike is especially powerful. The KLX dates back to 1994 when it was a full-time dirt bike. The camo version is $5549. 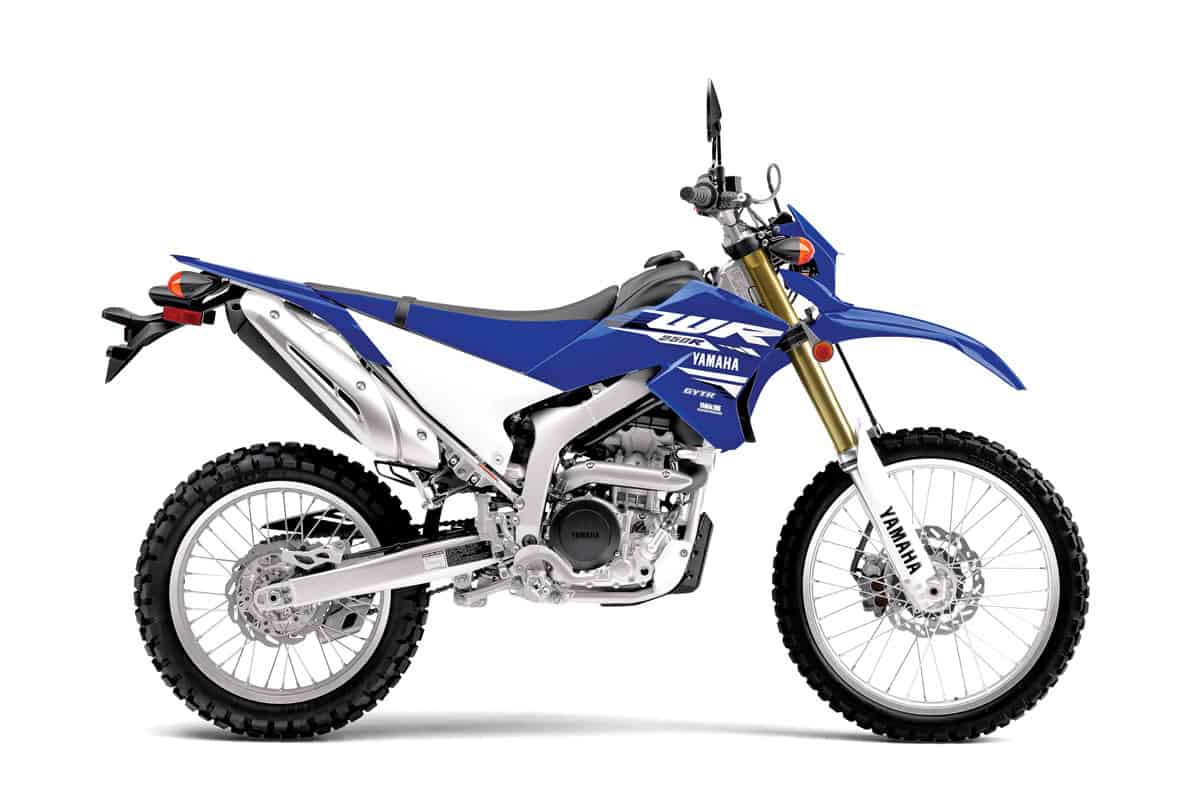 YAMAHA WR250R: $6699
Of the Japanese 250cc dual-sport offerings, the Yamaha’s WR250R offers the most performance in both the motor department and the suspension. It’s still an entry-level bike with modest potential for serious dirt riding, and it’s handicapped by a price that’s significantly higher than the Honda’s and Kawasaki’s. 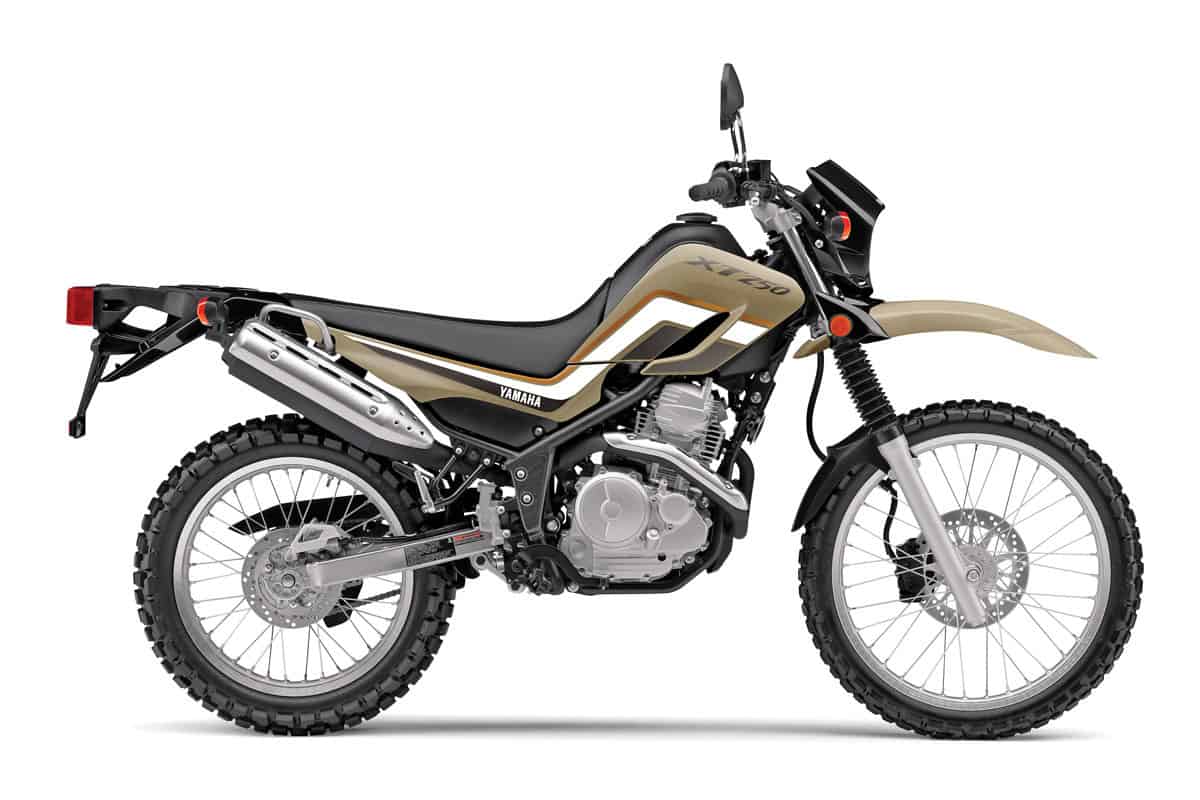 YAMAHA XT250: $5199
In order to compete price-wise with the Honda CRF250L and the Kawasaki KLX250, Yamaha offers a second model in the 250 dual-sport category. The XT250 has an air-cooled, two-valve motor. It has more basic suspension compared to the WR250R and uses a CV carburetor. The transmission is a five-speed. 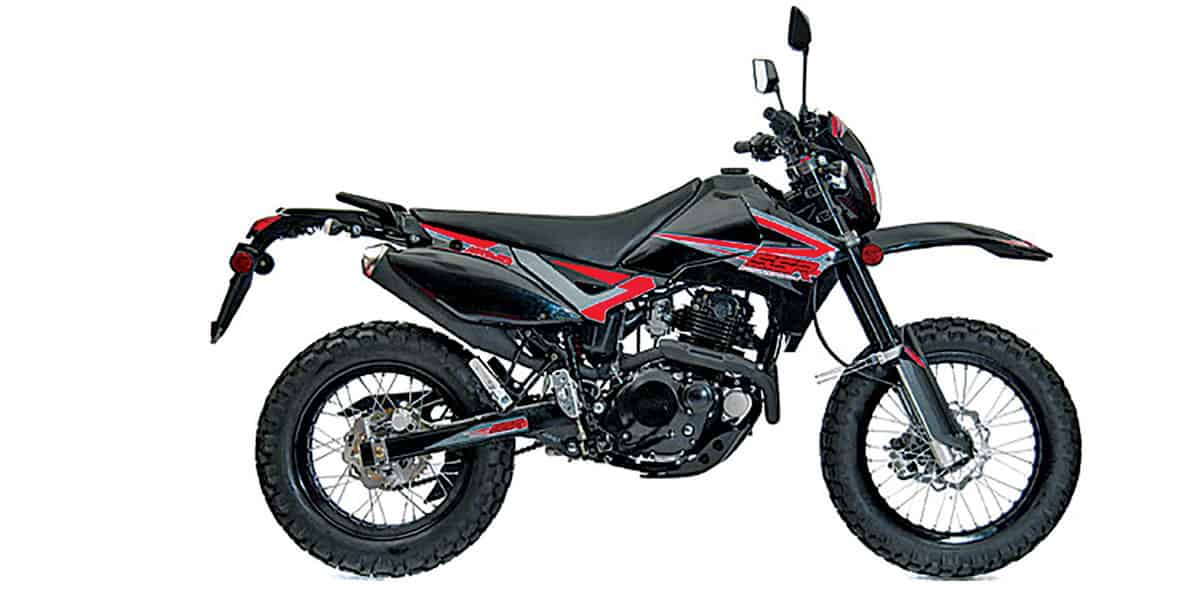 SSR XF250: $3149
SSR has bikes manufactured in Asia for the U.S. market and, unlike other import companies that have come and gone, has good support and warranty service over here. The XF250 has an old-school, air-cooled motor; a very low seat height; and a 12-month, 12,000-mile warranty. It’s available in a more street-oriented configuration as well. 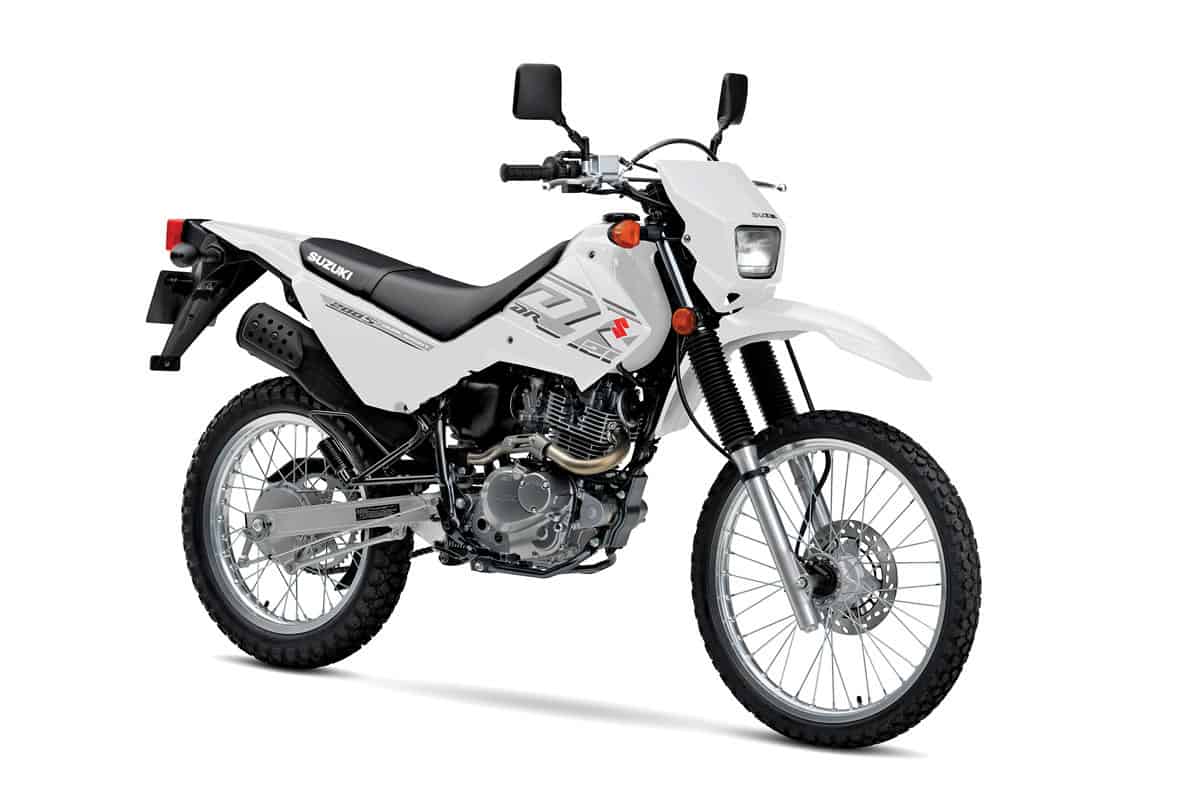 SUZUKI DR200S: $4599
This bike has been in Suzuki’s lineup for a very long time and still serves well for around-town transportation and mild off-road excursions. The bike has an air-cooled, two-valve, carbureted motor and a rear drum brake. Between the 3.3-gallon fuel tank and the claimed 88 miles per gallon, it should only need gas in leap years. 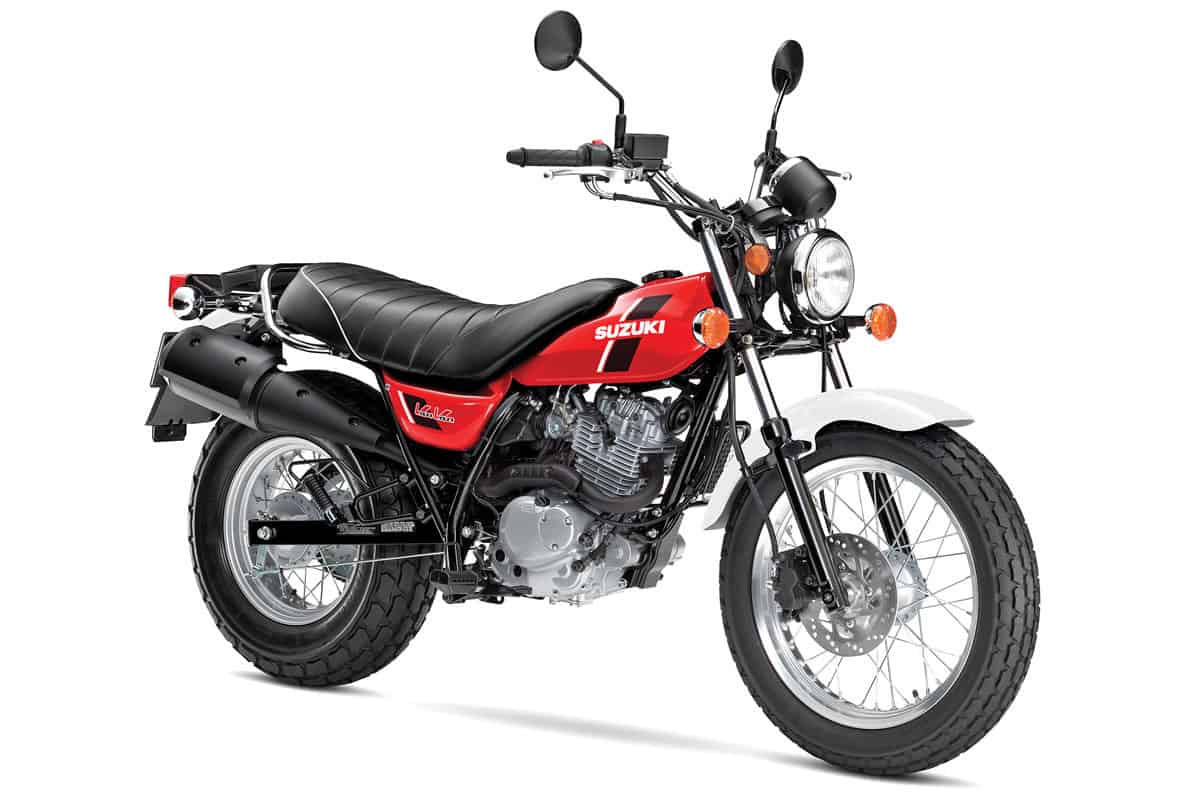 SUZUKI VANVAN: $4599
This model has only been in the U.S. market for a couple of years and is clearly inspired by the long-term success of the Yamaha TW200. The VanVan has retro styling with a low seat height and is aimed primarily at campground-level recreation and around-town street use. The motor is similar to the one in the DR200S but has fuel injection. 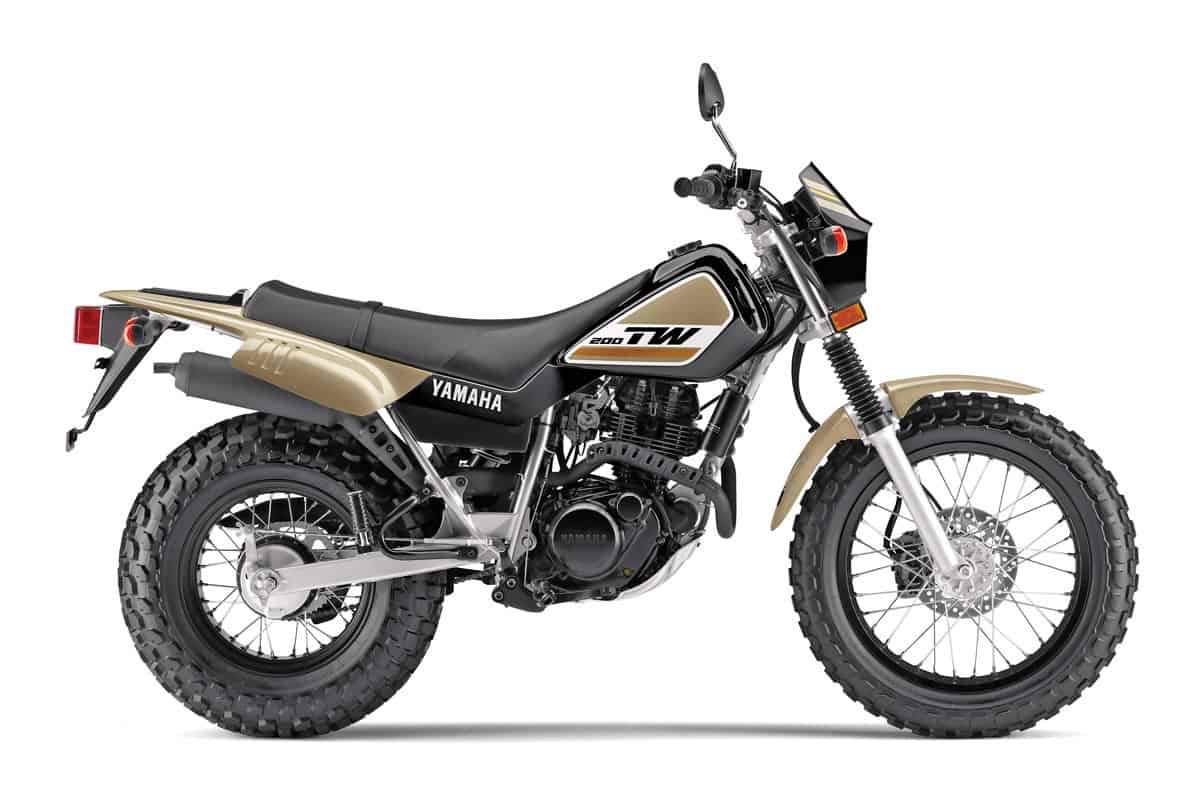 YAMAHA TW200: $4599
Yamaha has a timeless classic in the TW, which has been around since the late ’80s. It got a number of changes, including electric start back in 2001, but otherwise still offers the same low seat height and stone-cold reliability it did in the Reagan years. The TW’s fat but small-diameter tires have become its most distinctive trait over time.

BLAST FROM THE PAST: BROC GLOVER