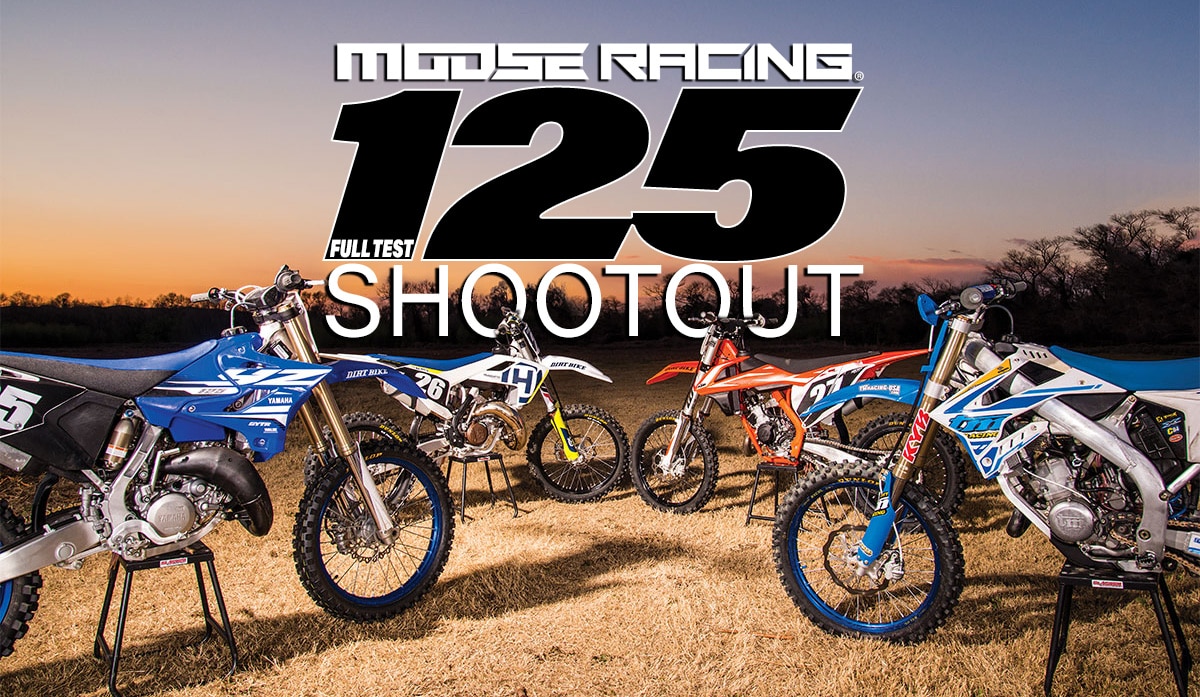 The 125 class is alive! It always has been. Back in the old days, 125 motocross bikes were the biggest-selling dirt bikes on earth. Even though that has changed, the small-bore two-strokes are still a healthy, thriving subculture in the American motocross scene. The FMF Two-Stroke Challenge had crowds lining the fences at several U.S. nationals. There’s a prospering 125 class in Europe, and the sound of 125s still fills the air at local tracks around the world. All this hasn’t gone unnoticed at the factories. KTM and Husqvarna came out with all-new 125 motors in 2016. Yamaha has continually made small updates to the eternal YZ125. Even tiny Italian maker TM has put more development into its MX125. It’s time to look at these bikes and see how they stand up to today’s standards.

It wasn’t that long ago that Husqvarna was an old man’s motorcycle company. Riders who were old enough to remember the heyday of the Swedish company had great fondness for that legacy; riders under 30 didn’t care. That’s changing now for a variety of reasons, ranging from riders like Zach Osborne to products like the TC125. In 2016 Austrian engineers completely redesigned the 125 motor. It was a bold decision to invest in a carbureted two-stroke design when fuel injection was obviously the trend, but the move was successful and the response was overwhelming. The AER 48 air fork came in 2017, and here we are with fresh meat for the 125 faithful.

There’s no denying the fact that the Husky 125 motor is incredible. If 125s were running like this back in 2002, the 250 four-stroke would never have gotten a foothold in racing. Peak power is right up there with some current 250s, and the best part is that it actually has a decent powerband. No, it doesn’t have real low-rpm torque like a big bike, but it’s easy to keep the Husky in the meat of the powerband. Weight is another big strong point for the TC125. It’s about a 1/2-pound heavier than the KTM 125, but both round off to the same figure—195 pounds without fuel. Wow. That kind of weight means that overall handling is like magic.

In stock form, the jetting is rich. We lowered the needle one position and installed a 32.5 pilot jet. We can’t say that suspension is a real weak point on the Husky 125, because it’s actually very good, but you can spend a lot of time trying to get it just right for lighter riders. The WP AER48 is the best air fork ever offered to the public, but air is just another aspect that needs attention. One of the few differences between the KTM and the Husky is the TC125’s composite airbox, which has no real advantages but is more restrictive. 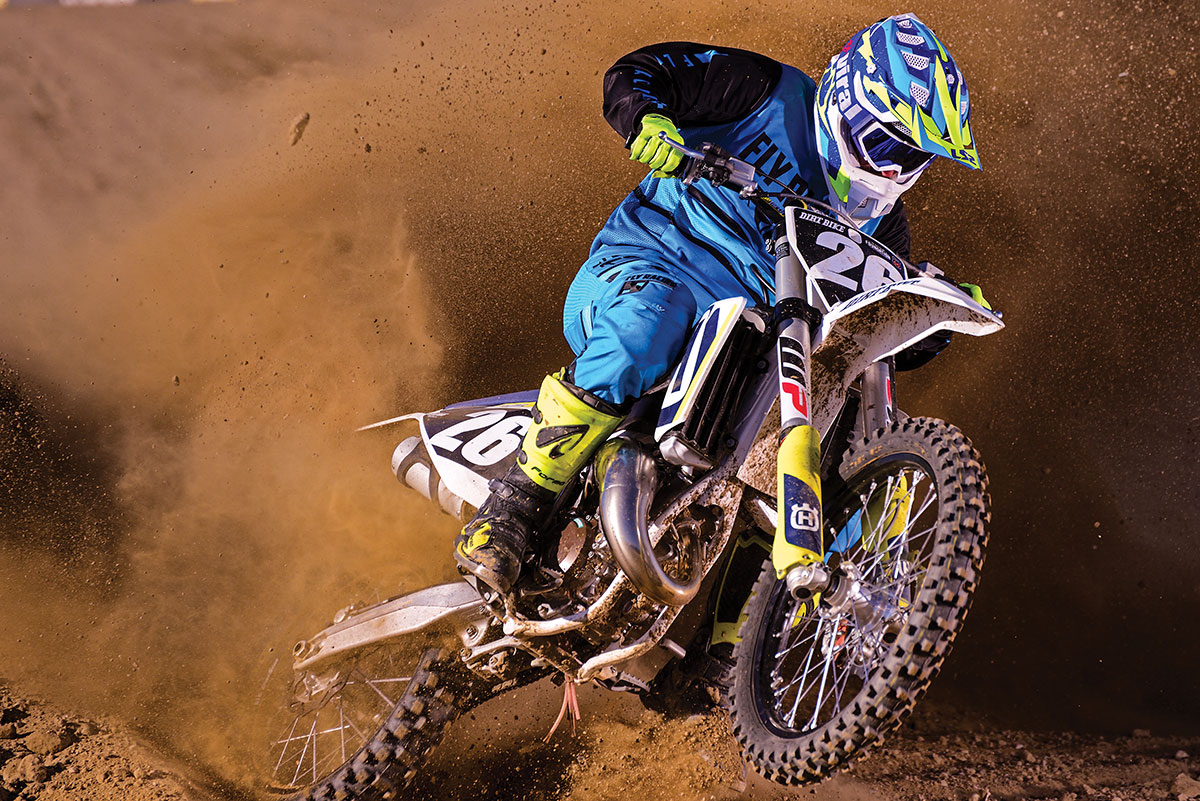 This bike is the future of the 125 class as well as the future of motocross in America. Travis Preston would have been a national champion back in 2000 if the Husky 125 of the time had this kind of performance.

While other manufacturers have sporadic interest in the 125 class, KTM has always been there. Beyond just being a bike to fill the spot, the 125SX has undergone just as much annual change and evolution as any bike in the lineup. It has always been a priority, and in 2016 it was revised in virtually every way. The motor was re-engineered and scaled down. The chassis was redesigned, and the overall weight dropped below the 200-pound mark. Even though the motor uses the same basic case-reed, mechanical power-valve design as it has for years, the performance standard in the 125 class has undergone a serious change. This bike is also the basis for the Husqvarna TC125, but there are several differences, such as the subframe, the airbox, the clutch master cylinder, the bars and the bodywork.

When a bike has horsepower and handling listed as number one and number two on its list of strong points, you can’t go wrong from there. Like the Husky 125, the KTM has a level of horsepower that we thought just wasn’t possible from a 125 a few years ago. We have ridden a lot of near-40-horsepower 125s over the years, but none were this easy to ride and keep on the bubble. The KTM seems to make just a little more power at peak than the Husky, but the difference is very marginal. If you have never ridden a bike that weighs less than 200 pounds, you’re in for a real treat. It makes you believe you’re a better rider. The brakes are strong, the clutch pull is light and the suspension is decent.

The KTM was a little rich, although not as rich as the Husky. We eventually settled on the same jetting for both bikes—one position leaner on the needle and one step leaner on the pilot. We like the overall suspension and the handling of the KTM; although, despite the continual development, we have to admit that it still hasn’t surpassed the old-school Yamaha in those regards. 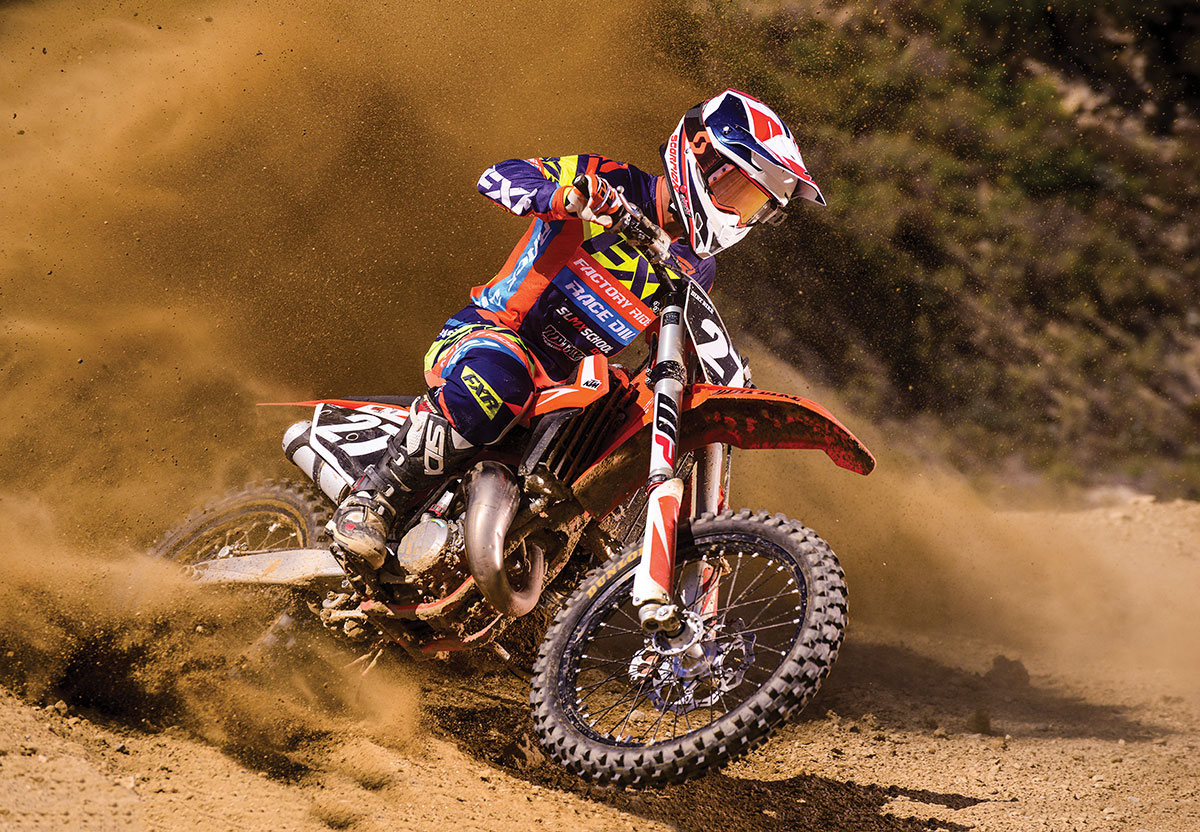 Most diehard fans already know that KTM has never forsaken the two-stroke. Just look at the results from Loretta Lynn’s AMA Amateur Nationals. Half of the 125s were KTMs, and in the smaller two-stroke classes, the orange saturation went even deeper. KTM has the 125 racers in the U.S. covered. 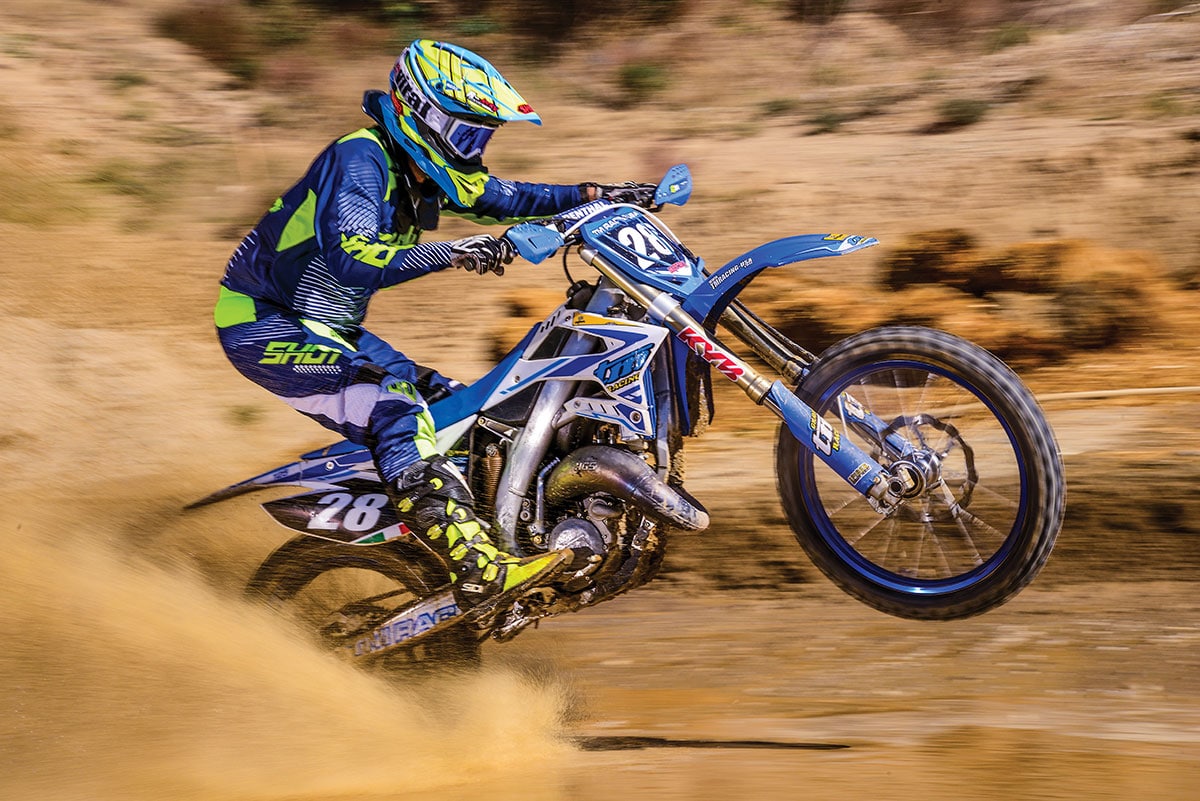 If you’re a 125 fan, you’re already a member of a cult. If you’re a TM MX125 fan, you’re officially on several watch lists—but in a good way. It means you like being different and have an appreciation for off-beat craftsmanship. TM motorcycles come from a small, independently owned factory in Pesaro, Italy. TM is famous for making fast motors in the motorcycle and karting worlds. The MX125 has continuously evolved through TM’s involvement in the Euro racing world. What appears on the EMX 125 factory race bike invariably appears on the production bike a year later. The TM has an electronically controlled power valve, a hand-welded aluminum frame, a KYB fork and a TM-made rear shock. 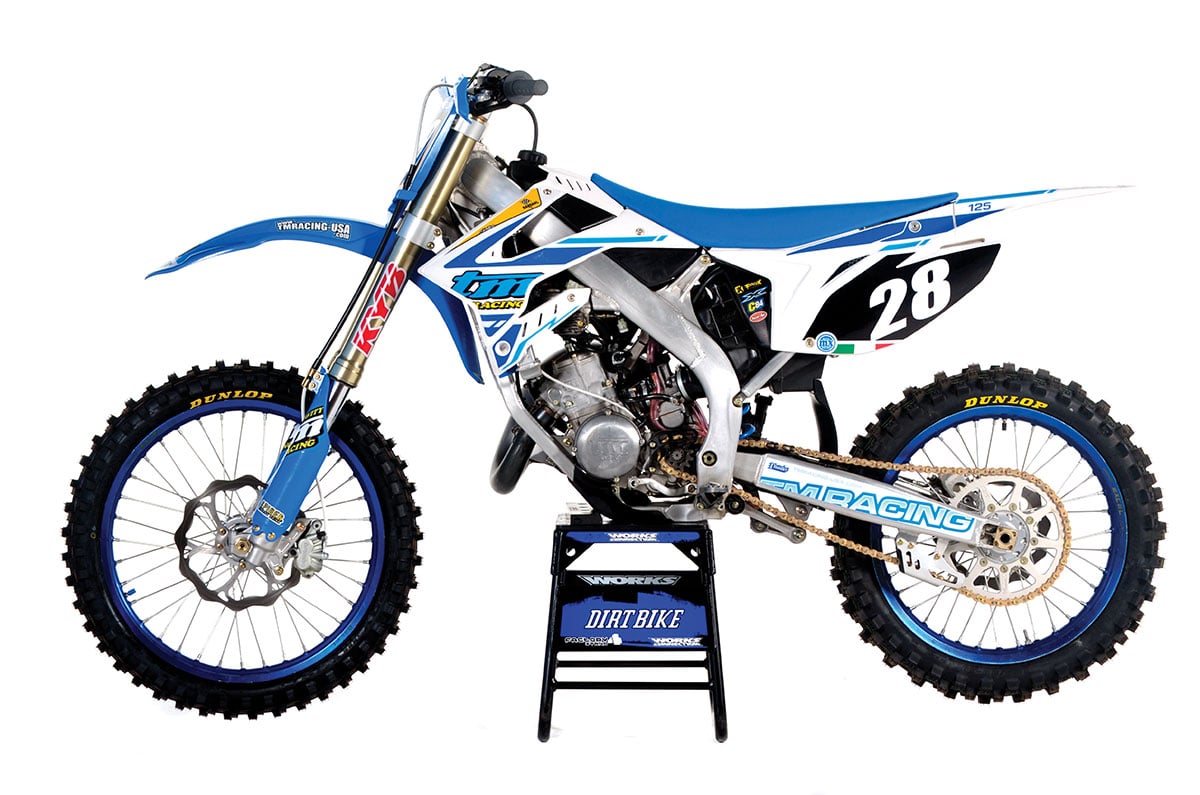 The most compelling reason for the TM 125 is exclusivity and craftsmanship. This is a very limited-production motorcycle that is assembled by hand in Italy. There are very few parts sourced from China or Southeast Asia. The bike’s peak horsepower is excellent, and overall handling is very stable. We know from past experience that the TM is freakishly reliable. The fork is excellent and somewhat similar to the one on the Yamaha YZ125. Every part on the bike shows care and an element of style.

The TM isn’t an easy bike to ride or own. It has a very narrow powerband, and it needs to be ridden by someone who knows what he’s doing. In the days of 125 factory works bikes, we tested machines like Travis Pastrana’s works RM125 and James Stewart’s SR125. That’s what the TM feels like—a works 125. It’s a little too demanding for the average novice. The rear suspension needs more setup, but it might be difficult to find an expert on TM-made shocks. The bike requires a blend of race fuel and pump gas to run at its best. 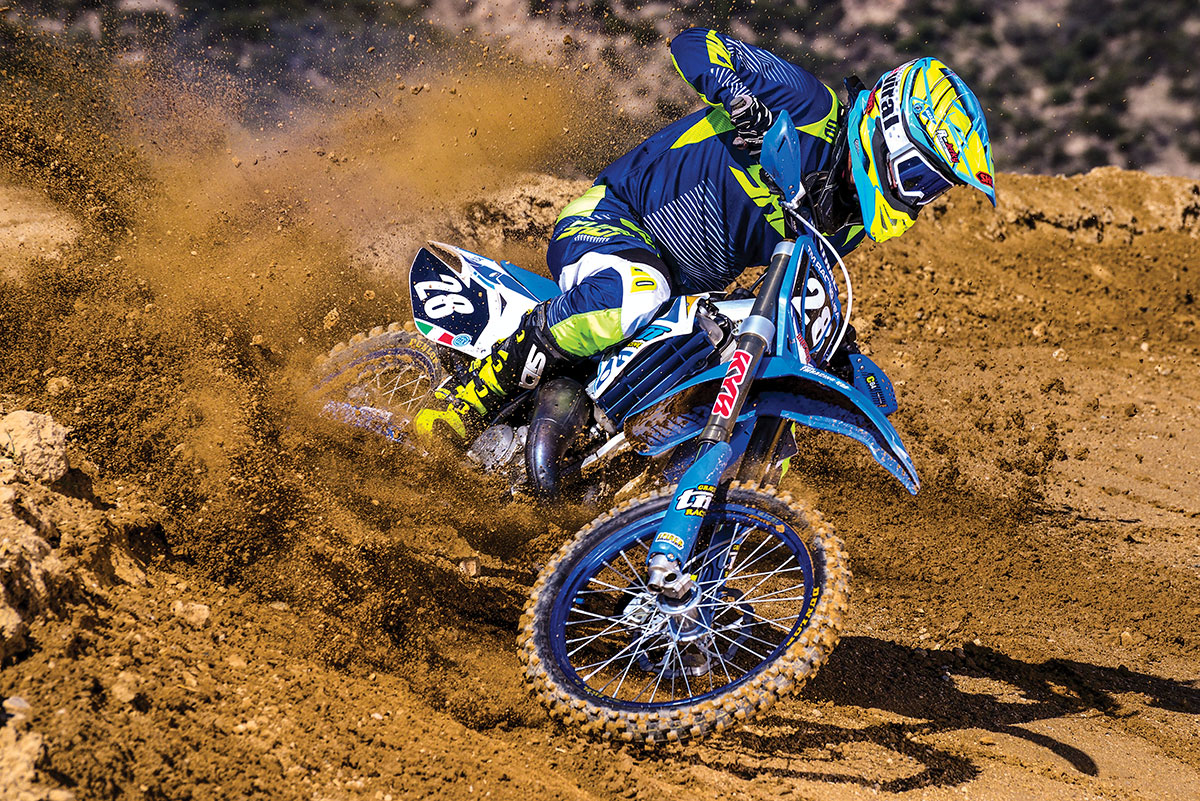 The TM is the type of bike that anyone would be proud to own and ride. It’s not for the passive rider, though. You have to get involved on every level. That means learning how to shift right on cue and keep the throttle wide open all the time. Most riders transitioning from the 85 class already know how to do all that. Older riders might struggle.

There isn’t a dirt bike rider in the world who isn’t somewhat familiar with the Yamaha YZ125. Whether they’ve owned one or thought about owning one at some point, American MX riders have a long history with the little YZ. Yamaha knows the bike is a rolling legend, and even though most people think it has been the same bike for the last 13 years, a gradual program of updates has kept it relevant. The suspension isn’t that different from that of the current YZ250F, and even the bodywork of the YZ was updated in 2015.

We’ve said it before and we’ll keep on saying it—the YZ125 is the best-handling MX bike in the world. The backbone-style aluminum frame that came out in the middle of the last decade was Yamaha’s best. When you combine that with the outrageously good KYB SSS coil-spring fork and the fact that the bike weighs only 201 pounds without fuel, you have the formula for handling magic. The little YZ motor also has a very user-friendly powerband. The low-end power is excellent and the jetting is spot-on. The bike has proven to be reliable, the brakes are good and the clutch has a super-light pull.

Yamaha has been very conservative when it comes to motor changes on the YZ125. It got a bunch of changes in 2005, but since then very little has happened. The bad news is that even in 2005, the Yamaha motor already suffered by comparison to the KTM. Over the last 13 years, the KTM motor has only become faster, making the YZ seem like it has gotten slower. The Yamaha might have good brakes and a good clutch, but in both respects, the KTM’s components are better. 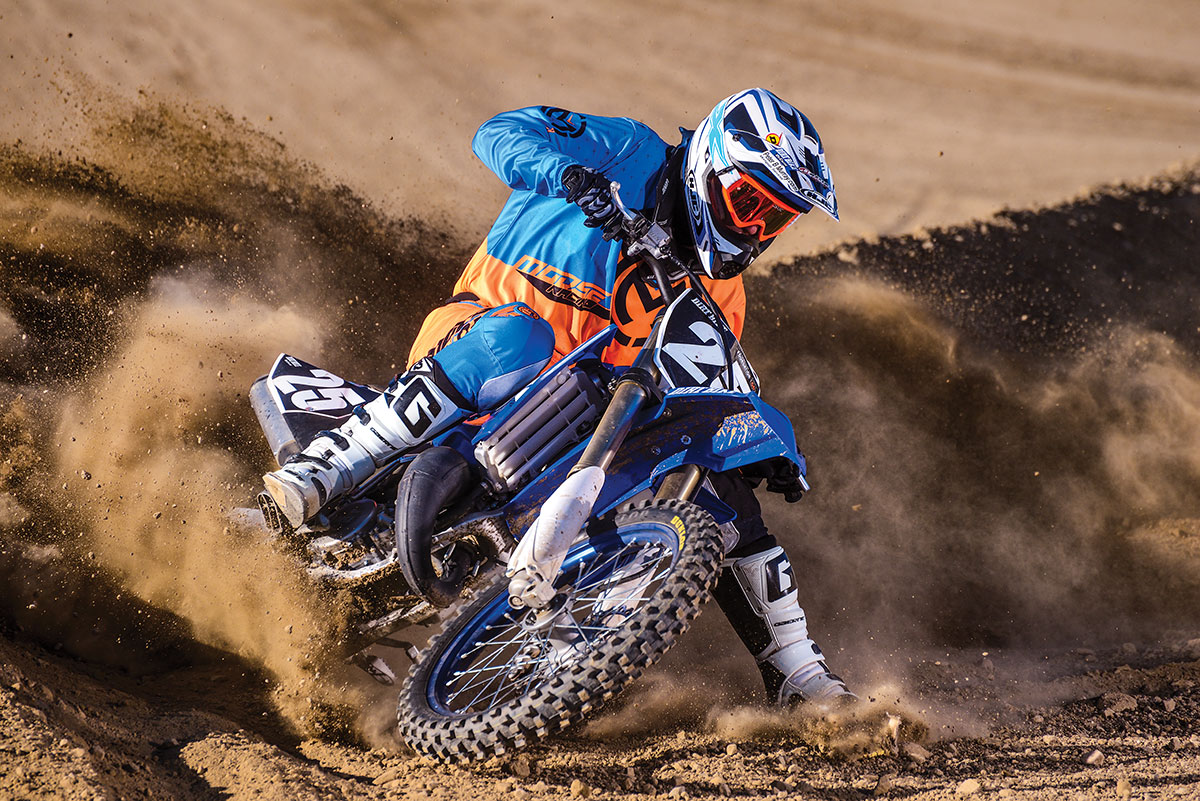 If you want a bike that makes you feel like a hero every time you ride, it’s hard to argue against the Yamaha YZ125. It handles so well it just makes you happy to be riding. If you go racing against other 125s, the YZ’s peak power isn’t enough to get the job done anymore. You can certainly modify the YZ, but it’s tough to be cost-effective when the KTM and Husky aren’t that much more expensive.