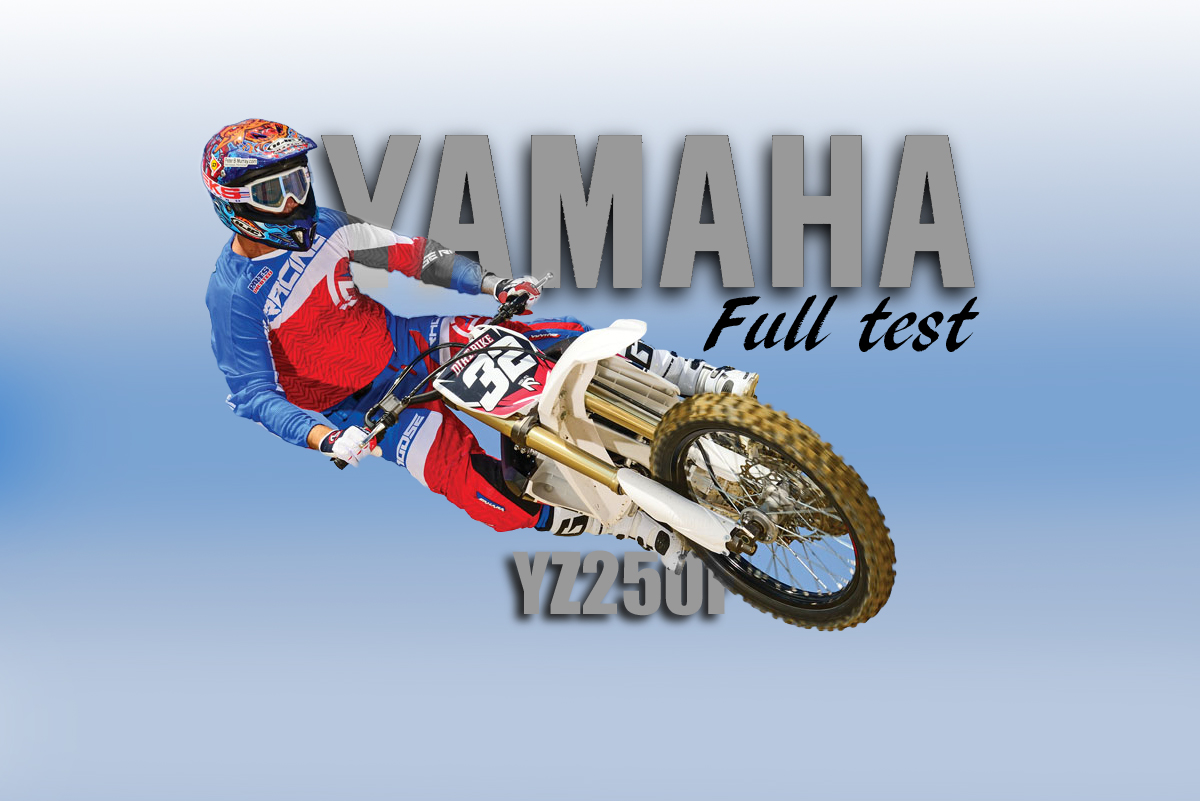 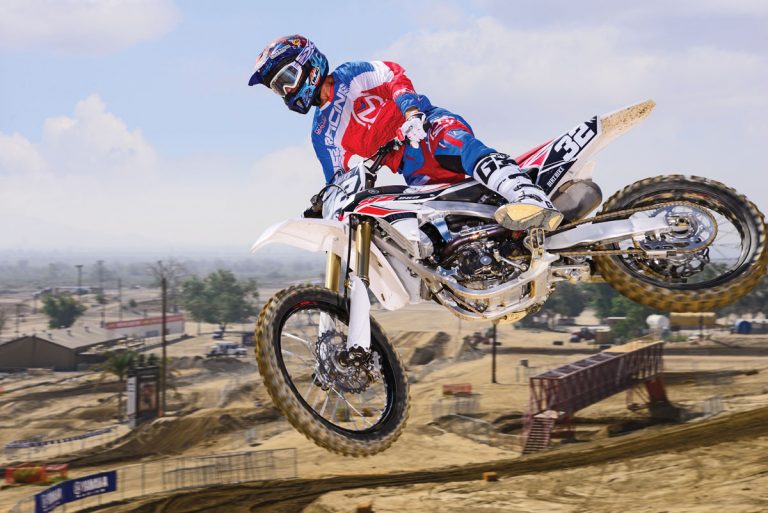 If you win a little, everyone’s your friend. If you win too much, the smiles go away. Security cameras are watching you. Men in dark suits stand nearby, and the tension rises. Yamaha has been winning big for three years in the 250 class. The YZ250F is the best-selling 250. It’s universally praised, and it has won two consecutive national championships. Since its redesign in 2014, the YZ has won 18 outdoor nationals, while Kawasaki has won eight. KTM has won five, and Suzuki, Honda and the rest have won a combined total of zero.
Everyone else is getting a little angry. If you’re Yamaha, what do you do? There’s only one thing you can do. Keep working.

WHAT HAVE YOU DONE LATELY?
In 2014 the YZ rose from the dead. The carbureted, five-valve motor was placed on a pedestal in the Museum of Great Things That Stayed Too Long, and a new motor surrounded by a new chassis took its place. The 250 was recast in the same image as the 450 with its reverse, rearward-tilted head. Fuel injection came at last, but in the case of the Yamaha, it didn’t add as much weight as we had seen with other dirt bikes. The new YZ was the lightest in the class, and the success story started.
Since then, other bikes have come along that are faster and lighter. Yamaha knew that would happen, and the 2017 YZ has received just enough attention to keep it fresh. There are 16 changes to the new bike.
• The funnel between the airbox and the throttle body was lengthened by 15mm.
• Both the cams and cam springs are new.
• The cylinder head is new with different port shapes.
• There’s more volume in the throttle-body joint.
• The middle section of the pipe is larger.
• New material is used for the connecting rod, which has a slightly different shape.
• Different heat treatment is used for the engine cases.
• New mapping has been developed for the ECU.
• The clutch arm on the engine is shorter, and the cable angle has changed.
• Five gears have been altered in the gearbox, and the output shaft is larger.
• The lower-engine mounting brackets are now steel; the upper ones are reshaped.
• There’s increased frame rigidity around the swingarm.
• The fork’s outer tubes are more rigid, and the valving has been changed.
• Both footpegs are 5mm lower.
• The rear disc has new material.
• The Dzus fasteners are recessed in the airbox cover.
Individually, these changes won’t shake up anything. But, shaking things up wasn’t the goal. Maintaining the status quo is what you want when you’re on top of the heap.

WHY IT STILL WINS
We used to think that peak power was the most important factor in the world of 250cc four-stroke motocross bikes. That’s because they were so slow. The first ones made less power than a 125 two-stroke. Still, the Yamaha’s success has come despite not having the biggest dyno number. The quality of the YZ250F’s power is excellent. It has good low end and no hiccups all the way to a 14,000-rpm peak. What riders like most about the Yamaha is how it responds to throttle input. You don’t have to twist it all the way open to make it go. It starts moving from the first crack. Peak power happens way up high—a little too high to give you a margin of comfort between the happy zone and the rev limiter. You often find yourself flirting with the 14,000-rpm cutoff point. The good news is that this year the cutoff is gentler. Instead of feeling like you just jerked the extension cord out of the wall, it feels like the YZ just stops making power. If you remember, Yamaha engineers play with this each year. It turns out that there are many ways to keep a motor from over-revving, and the current formula means that you can keep screaming the motor if you find yourself in a situation where you can’t get to the shifter.
Yamaha is the only maker that doesn’t offer you alternate maps that can be switched through the use of buttons or couplers. The power is what it is—unless you plug in the GYTR Power Tuner. This is a hand-held device sold through Yamaha’s accessory division that allows you to mix and match different fuel deliveries and ignition advances. It sells for a little under $300 but is money well spent. The Power Tuner is easy to use and will work on any fuel-injected, closed-course Yamaha.

SUBTLE CHANGES
We appreciate the Yamaha’s power, but what we really love is its suspension. The fork remains our overall favorite. It’s the KYB SSS fork with a good, old-fashioned coil spring in each leg. Everything else in the 250 world has gone a little weird. There’s the single-sided coil-spring SFF fork on the Kawasaki, the Showa TAC air fork on the Honda, the KYB PSF2 air fork on the Suzuki and the AER 48 fork on the KTM and Husky. The Yamaha SSS is the only fork that uses the most proven, trouble-free design with two coil springs. The performance of some air forks has progressed to the point where they compare very favorably with spring forks, but they still require more service and a somewhat painful setup process. Air forks still change with heat and force you to carry around one more thing (i.e., an air pump) on every single ride. If you do everything right and you’re a little lucky, you’ll make one work as well as every single Yamaha fork does without being touched.
That doesn’t mean the SSS fork wins on all counts. It’s heavy, and you’re stuck with the spring rate that Yamaha preselected for you. In general, most of our riders felt the Yamaha fork was a little stiff and wanted to turn the compression damping out about four clicks. Still, the fact that one fork was acceptable for riders like Robbie Wageman, who’s young, light and fast, and Ron Lawson, who is none of those things, is impressive. The fork is well balanced with the rear suspension, which is likewise a touch stiff for the average 250 rider. If you do find you’re on the light side for Yamaha’s settings, the best thing about the Yamaha’s suspension is that it’s very easy to tune. If you don’t want to work on it yourself, there are dozens of suspension shops that know the KYB stuff inside and out.
Whether it’s because of the fork or the chassis, the Yamaha inspires confidence. It’s one of those bikes that gets better and better the harder you try. This is true for novices as well as pros. The engineers at Yamaha have spent a great deal of time working on the chassis, making the frame flex in just the right spots while maintaining rigidity in other places. The increased rigidity makes the bike track a little straighter and feel more secure at 10/10th speed. Even if you’re not a blue-bleeding Yamaha guy, you’ll notice that the bike likes being pushed harder. Also, if you’re not a Yamaha guy, you’ll notice that the YZ isn’t one of those bikes that just falls into turns. You have to make it change directions. Conversely, it’s not a bike that switches lines on its own. Yamaha is bucking the trend of very quick steering that we’ve seen from almost everyone else. The company’s test riders are sticking with what works for them.

THE PLAYING FIELD
Even though the 2017 YZ250F has more changes than in the previous two years combined, the bike’s success or failure won’t be gauged by that. Yamaha has enjoyed a good run for the last three years because all the other bikes in the 250 class have had their own issues. The Kawasaki and Honda had gone too long without significant changes. The Suzuki went a little backwards in 2016, and the Husqvarna and KTM were handicapped by their front suspension. Almost all of those factors have been addressed in 2017, so it remains to be seen if Yamaha’s program of subtle change will be enough to keep it on top. But one thing is certain: if there’s a better 250F for 2017, it’s going to have to be a very, very good motorcycle. 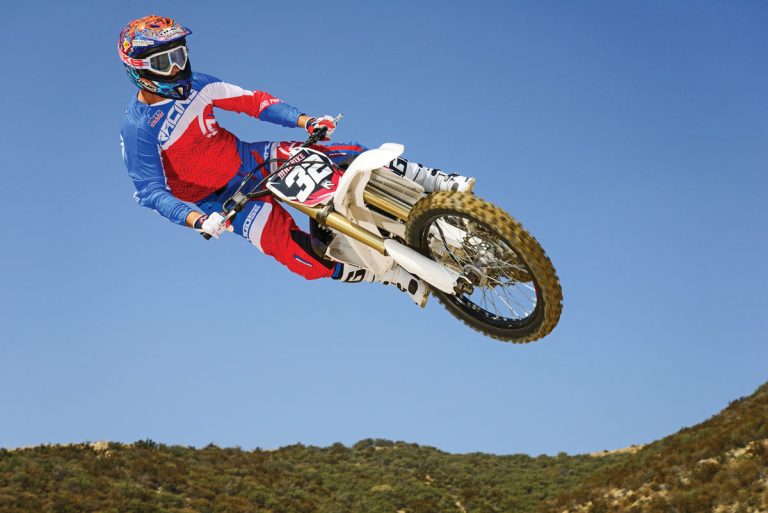