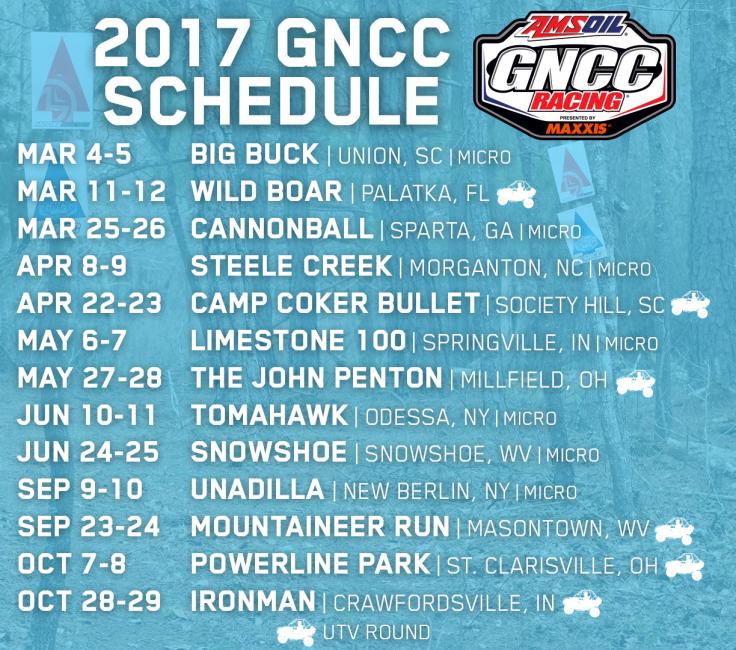 MORGANTOWN, W.Va. (November 11, 2016) – Racer Productions, producer of the AMSOIL Grand National Cross Country (GNCC) Series presented by Maxxis, an AMA National Championship, announced today the 2017 series schedule. For the first time, the GNCC series will kick off with the Big Buck GNCC on March 4 and 5 in Union, South Carolina. This round will also serve as the first race of the six-round ATV and Bike Micro 50cc championship.

Daytona Beach’s 2017 “Bike Week” festivities will take place one week later than they are historically held, offering a unique opportunity to relocate the season opening round. For over 20 years the Big Buck Farm has been a stop on the GNCC tour, and will make the ideal starting location as the series attempts to break a record setting attendance for all 13-rounds achieved this past 2016 season. To help grow this goal, 10 of the 13 rounds will be held in conjunction with a co-sanctioned partners.

After opening in South Carolina, the series continues to make stops at many of the traditional favorite venues. The Rodman Plantation will be buzzing with ATVs and bikes, as well as UTVs where their six-round series will begin on March 11 and 12.

“The 2016 season was one of the most successful years in the history of GNCC Racing,” said GNCC Trail Boss Jeff Russell. “All of our venues offer a different challenge, and we are excited to return to all of the tracks that made the 2016 season so great. As we move into 2017 we are certain that the best racing action will continue to take place on the GNCC circuit.”

Following the season opener in Florida the UTV championship will head to Moree’s Sportman’s Preserve in South Carolina. Ohio’s John Penton GNCC will host the fourth round, with the Mountaineer Run GNCC following before the penultimate UTV round at Powerline Park. The Side-by-Side championship will conclude with the Ironman season finale in Indiana.