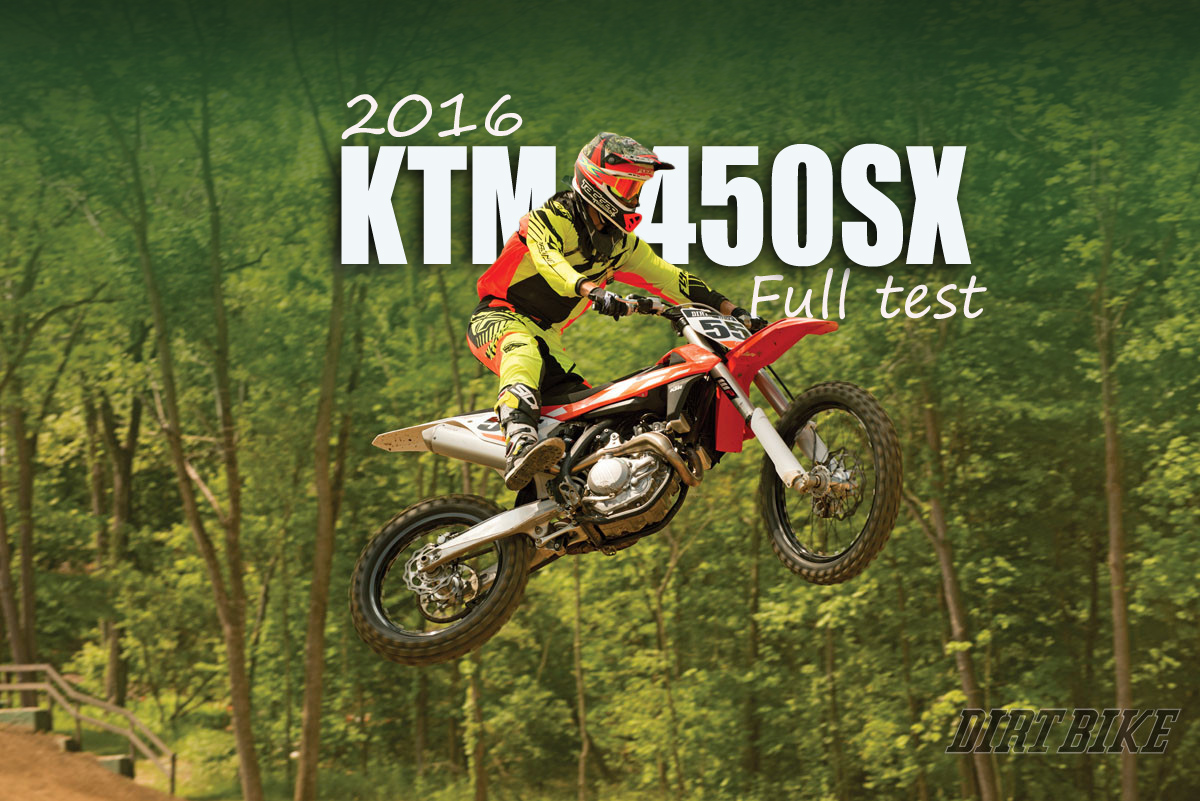 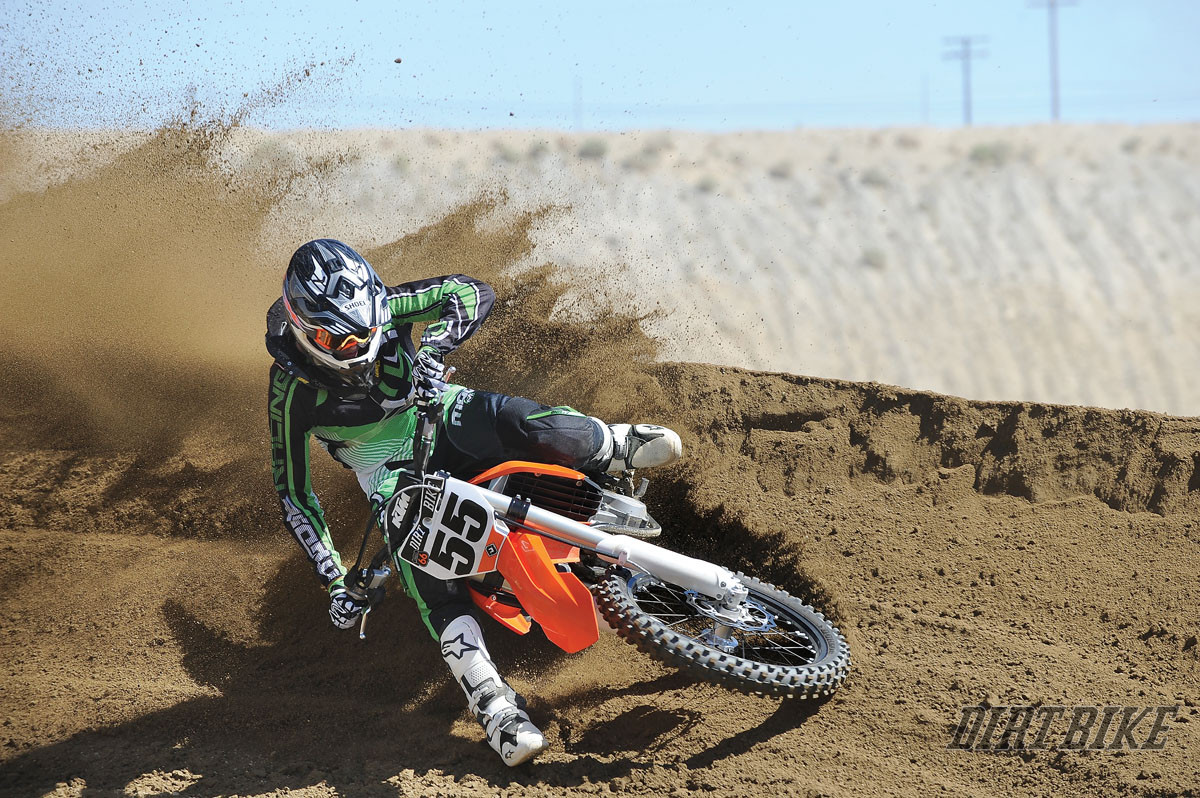 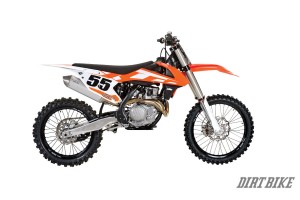 Questions about the 2016 KTM 450SX-F revolve around two key areas: One, is it better than the 2015 450SX-F? If so, why? Two, is it improved in any way over the 2015 1/2 Factory Edition? If so, in what way?
A huge yes, followed by another yes. This machine—new from the ground up and fit not just with a list of updates but a list that extends from the frame to the engine—is the result of a company that prides itself on taking what it learns through racing and applying it to its new models.
THE CHANGES
The new engine is more compact, 4 pounds lighter, and has a new camshaft, fuel injection and power numbers. The head is lighter, uses Ti valves and allows the power to maximize at 11,500 rpm. A shorter cylinder, a crankshaft with 10 percent more inertia and a shorter rod make the engine more compact and the power snappier and lighter-feeling. The engine cases are smaller and lighter. The clutch is once again a DDS design. The Keihin 44mm throttle body is new, and the tranny uses numbers identical to last year’s, but with a new coating on first and fifth for more durability.
It has a new frame, shorter wheelbase, a steeper steering angle and new rigidity numbers for better track comfort and less weight. It is fit with new footpegs, called No Dirts, that resist mud-pack and have a larger footprint. The swingarm is lighter, and new plastics were designed to improve rider ergos and movement. Also, a new saddle with better foam and a lower seat height graces the machine. The new graphics are de-tuned: the frame color is back to a deep gray. The gas tank holds 1.85 gallons. The right radiator is all new, and KTM has optimized the coolant flow for a 10-percent improvement. In the cockpit the handlebars are Neken and are fixed to new perches that are rubber-mounted. They are still adjustable, but only by reversing the clamps for additional forward space. KTM has fit the bars with lock-on ODI grips, a new throttle assembly and a handlebar-mounted selection switch to control different ignition maps and to activate launch control. The battery is new; it’s a lithium unit that is half the weight. There’s a new airbox that provides no-tools access to filter changes, a better seal and improved airflow. The chainguide is new and longer for better chain guidance, and the Galfer rotors are lighter than last year’s.
The fork—a WP 4CS unit—is fit with all-new valving in an effort to make the action plusher. One of the main complaints about the KTM has been that it has a stiff and unyielding fork. The new “America” fork is unique, as the valving and spring rates are geared for outdoors. It’s interesting to note that KTM Europe uses an air fork with a design that is similar to the single-stage KYBs. The WP shock is brand new for 2016 and has revised valving over the Factory Edition 2015 1/2 model. Besides internal valving that targets improved traction and more compliance, new longer link arms and geometry via the linkage system all work as a team to add smoothness and tractability to the rear shock action. Overall, the machine is about 8 pounds lighter than last year’s 450. 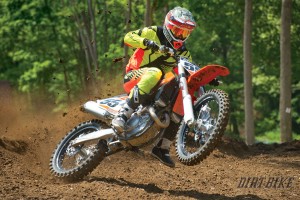 TRACKING
Let’s talk about the differences between the 2015 450SX-F and the 2016 450SX-F on the track.
Power: The main difference is that the 2015 feels nasty and strong and belches hard out of the hole. It takes a real man to rein in the strong upper bottom-end hit. The 2016 feels smooth and light and vibrates less. While it seems to have less snarl, it actually makes very usable power. The flow of usable juice starts earlier, and while it lacks the hit of the 2015, the muscle factor, smooth factor, rev factor and overall power make this one of the best 450 powerbands ever. Add in the button start, hydraulic clutch and mapping in the FI that never lets the bike pop or flame, and the 450SX-F is a UFC fighter in a grade-school wrestling match.
Suspension: We have not been big fans of the WP fork for the last few years. Overall harshness, a total lack of noticeable adjustability and zero tolerance for track hack have left us disappointed. The new fork is a huge improvement. It’s finally plush, resists bottoming quite well and targets a broad spectrum of riders, though hard-charging pros will gripe that it’s too soft. We give it a thumbs up, since with it we can actually enjoy Glen Helen’s brutality, dine on LACR’s sand and take big jumps without anything bizarre, nasty or mean-spirited happening on takeoffs and landings. We really didn’t play too much with the clicker settings. Fifteen out is stock, and we went in three, four and five clicks, depending on the rider’s ability and size. 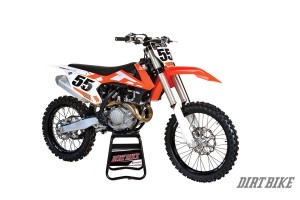 The shock provides a substantial performance gain, but it may be that all the suspension components are finally working together. With a fork that responds to track input and new shock ratios and damping, the rear end settles just right during acceleration and rewards the pilot with a strong bite, little movement side to side, and a calm swallow when big G-out landings are required. Overall, the suspension balance on the 450SX-F is finally close.
Handling: Compared to last year’s SX-F, the 2016 feels substantially lighter, more neutral, thinner and more maneuverable on the track. We set the sag at 104mm (note here: riders over 180 pounds will need a stiffer spring), and since we could dink with the compression easily (since it’s located on top), we usually went in a minimum of three clicks to get the fork to stay up just enough on jump faces and whoops yet still settle in the turns. The SX-F is not a cornering extremist, but it can track an inside rut and hold its own with anybody on a fast sweeper. Give part of the credit to the chromoly frame, a portion to superior suspension settings, and a big fat high-five to the slimmer and lighter package.
Odds and ends: We love the new saddle. The good foam damping and nice ergonomic design got top marks from everyone. Tall guys with an older saddle that they’ve built up are out of luck, though, as the new one has different mounting points. Kudos to the ODI grips! These are a huge improvement. Once again, excellent marks go to the Brembo hydraulic clutch, brutally effective brakes and the switchable mapping. We prefer the stock mode, though toggling to the boost map provides a meaty hit that some riders may prefer. The chain and chainguide are durable. Keep an eye on the spokes at the rim-lock point. The Dunlop MX32s are superb. 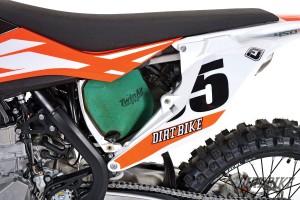 FINAL THOUGHTS
As a package, the 2016 KTM 450SX-F comes in on top, setting a new standard for the 450 motocrosser. It’s faster; considerably lighter; handles better; is fit with plusher, more usable suspension; starts with a button; and flicks like a 250F. So, is there a downside? Getting one may be an issue, as we’re hearing that availability is tough and the price tag is a bit mean at $9299. But, this machine is so brutally effective box stock that it nearly takes your breath away. 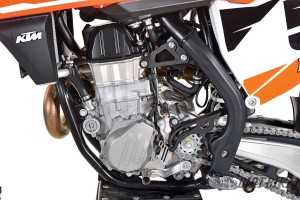