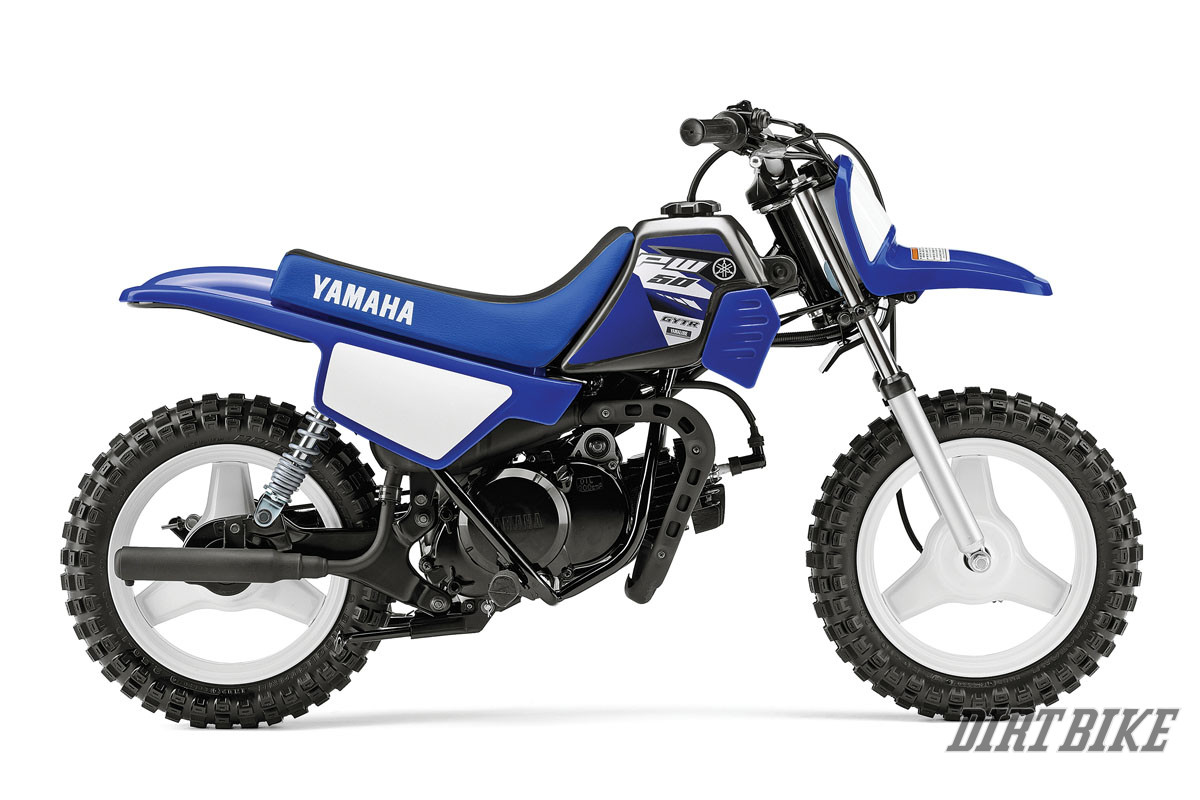 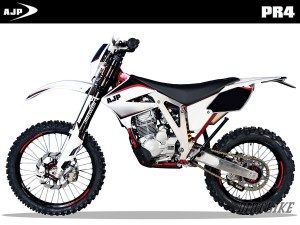 AJP is a company in Portugal on a mission to offer very affordable trail bikes to the U.S. The PR4 is a 233cc air-cooled four-stroke that produces about 20 horsepower and has electric start and Marzocchi/Sachs suspension. Dry weight is said to be about 229 pounds. The PR3 is similar, but offers a lower seat height for beginners and short riders. 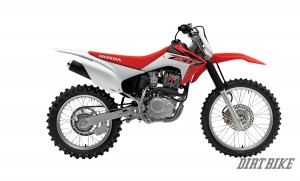 Honda’s tween-age trail bike got a major facelift for 2015. The styling and bodywork look just like the big CRF motocross bike’s, but the 230 is aimed at the camping/trail-riding crowd. It has electric start, and a manual-clutch, air-cooled motor in a chassis with full-size wheels and a 34-inch seat height. The 230 is the perfect family bike that won’t necessarily be outgrown. 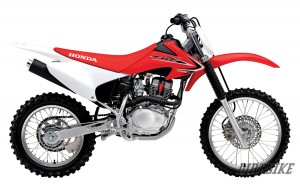 There are two CRF150s in Honda’s arsenal of smallish dirt bikes. The one with the “F” suffix is the Family version, not to be confused with the “R” (Race) version. The F has electric start; a milder, air-cooled motor; and drum rear brake. It still has a manual clutch and a five-speed gearbox. This year the F got a restyling job and now looks more like a full-size racer than its brother. 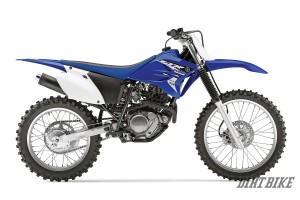 This is a machine that splits the difference between mini and full-sized motorcycle. The wheels are the same size of those in the full-scale WR line, but the seat height is a few inches lower and the power output is friendly. It still has a manual clutch, six-speed gearbox and electric starter. The Yamaha has an air-cooled engine with a conventional carburetor. 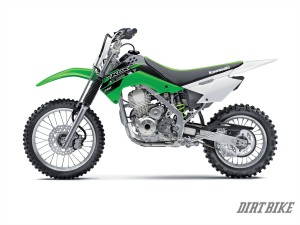 Kawasaki has the biggest gun in this class, with a little more performance than the 125 four-strokes from Suzuki and Yamaha. The KLX has a 144cc air-cooled motor with a five-speed gearbox and a manual clutch. The bike has hydraulic discs at both ends and a perimeter frame. The standard version has a 14-/17-inch wheel combo, while the L model has a 16/19. 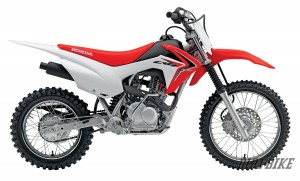 The Honda CRF125F has to fill some very big shoes—figuratively, at least. It’s the heir to the original XR75 from the early ’70s that gave Nixon-era kids their start. The 125 was new last year and has electric start and a four-speed manual gearbox. The standard version has a 14-inch rear wheel and a 17-inch front, while the Big Wheel has a 16 and a 19. 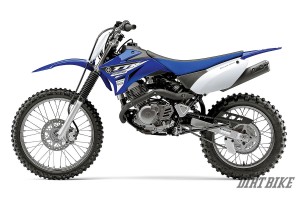 Yamaha was way out front with the TT-R125, giving it electric start years before it was fashionable. Now it remains the standard of the category. It has a 16-inch rear wheel with a 19-inch front, putting it in the big-wheel category suitable for teens. The motor is an air-cooled two-valver with a five-speed gearbox and a manual clutch. The small-wheel version isn’t in the line for 2015. 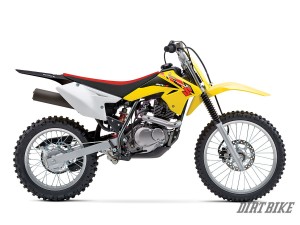 Suzuki has had its DR-Z125 in the line for a long time, but it got a facelift two years ago and now has a very modern look, like the full-size RM-Z450 that James Stewart rides. The DR-Z has a front disc brake and a five-speed gearbox with a manual clutch. It still lacks electric starting. The L model is alone in the lineup for 2015, with its 16-inch rear and 19-inch front wheel. 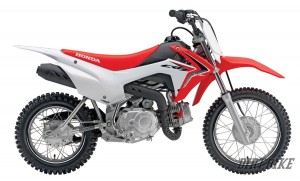 Honda has more bikes in the youth category than anyone, and the CRF110F is made to fill those preteen years. It weighs about 163 pounds full of gas and has a 26.3-inch seat height, making it easy for an 80-pound kid to handle. The motor has a four-speed gearbox with an automatic clutch. The electric starter is the feature that makes it really attractive for beginners. 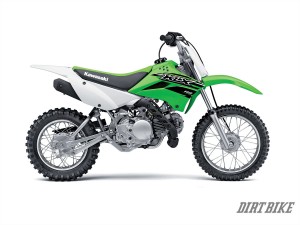 This bike has a dual following. The standard model is perfect for the pre-teen beginner because of its low seat height, automatic clutch and four-seed gearbox. The L model appeals to young riders, too, but has developed an adult fan club. It has a little more suspension travel, a taller seat height and a manual clutch. Both have six-month warranties. 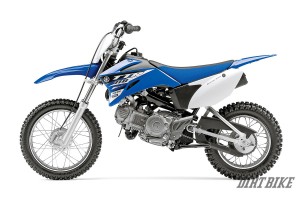 The Yamaha TTR110 is a pre-teen-sized mini with an automatic clutch and a four-speed gearbox. The electric starter is a big hit, and it has over 4 inches of suspension travel at both ends. The wet weight of the machine is around 160 pounds, and the seat height is about 26.4 inches, so it’s a good size for an 80-pound kid—although adults have been spotted enjoying the TTR as well. 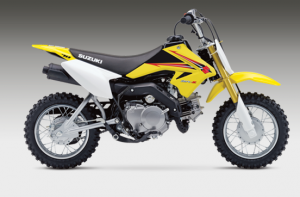 After a brief hiatus, Suzuki is back in the mini market with the DRZ70, a kick-start mini with a 67cc air-cooled motor hooked up to a three-speed gearbox with a centrifugal clutch.  The little Suzuki has new styling for 2015 and looks like a big RM-Z, but has a 22-inch seat height, which puts it somewhere between the 110s from Honda and Yamaha and the Honda 50 in height. 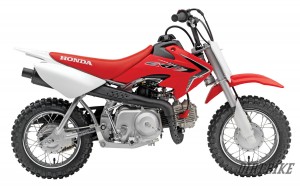 This is still the most imitated little motorcycle on earth. It spawned a whole class of copycat pit bikes. Now that fever has died somewhat, but the Honda 50 remains a truly great way to introduce your kid to the ways of dirt bikes. It has a three-speed gearbox with an automatic clutch. It weighs just over 100 pounds with a full tank. It does not have electric start. 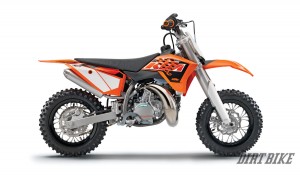 The KTM 50SX is the dominant machine in the world of mini racing. The Mini is a downsized version of the same thing, made for the early years of riding and perhaps racing. It still has the 50cc case-reed motor but more mildly tuned. The wheels are 10-inchers at both ends, and many of the features are top-notch, like the disc brakes and Maxxis tires. 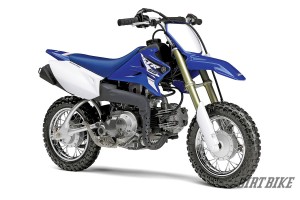 Kids do not like kick-starters. With most 50cc minis, dad has to jog behind the bike just to be close when it needs to be restarted. With the TTR50, he can stay in the camp and shout instructions from his lawn chair. The TTR50 has an electric starter, as well as an air-cooled motor with an automatic clutch and a three-speed gearbox. 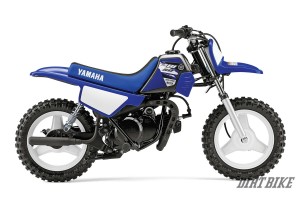 Every parent should buy a PW50 on his child’s first birthday. Even if the kid isn’t ready to ride, you can use it as an incentive to get the behavior you want. A wanna-be rider will do anything when there’s this kind of motivation. The PW is the ultimate first motorcycle. It has a fully automatic transmission, a super-low seat height, a driveshaft and an eternal two-stroke motor. 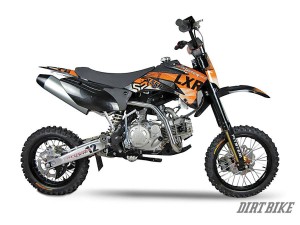 Pitster Pro has expanded its line far beyond the pit bikes that started everything. The selection starts with a 500-watt electric bike, includes 70cc through 155cc minis, and continues to a full-size 250. The company also has a line of retro street minis that resembles some of the classic Honda models of the ’70s—but at very reasonable prices. o