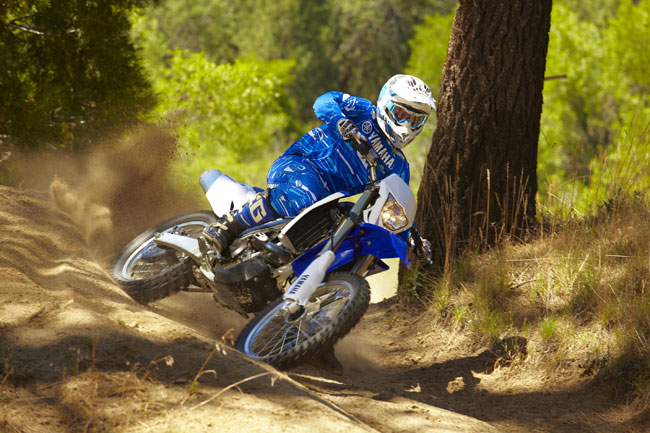 Most people feel that the new-for-2012 YZ250F perimeter aluminum frame is nothing short of brilliant. As far as the motor goes, the new WR has fuel injection a Keihin capacitor system, just like the YZ. If you wanted to strip it down, you could remove the electric starter, the battery and a few other items and have a bike that weighs no more than a motocrosser.

That idea of having a good race platform is actually very important and very difficult. The WR must meet certain federal requirements to be sold as an ‘off road’ bike, particularly noise and emissions. The YZs, on the other hand, do not, because they are classified as ‘closed course, competition’ bikes.
The solution was to sell a cheap competition kit–separate from the bike itself. If you want a racer, you get a new ECU and a throttle stop for $99. The ECU is traditionally about a $300 part. The competition throttle stop, by the way, simply allows the throttle to be opened all the way. WR owners have had to deal with this for years, usually just cut down the stock throttle stop which is limited to half throttle. Likewise, there is a baffle within a baffle in the muffler, all for the sake of decreased noise.
Another area where Yamaha put big emphasis is in the suspension. Where the older WR used an open-bath fork, the 2012 version has a separate air-oil system just like that of the YZ450F, but with softer settings. It is a much more expensive fork, but  just another reflection of the new, more serious role of the WR.
We got to ride the new WR for a couple of days at River Ranch, Florida, site of the first GNCC of the year. Initially, we rode the bike with the modified throttle stop and the inner baffle removed. Technically, this made the WR a competition bike. It still was super quiet and very lean–basically it would still pass EPA’s various tests, but Yamaha is such a conservative company that the directive was to pass by a huge margin. Thus, the Yamaha in competition form runs about like a fully legal Honda. That??s still pretty good. The bike has excellent low end power and a seamless transition between ‘off’ and ‘on.’ That’s where fuel injection traditionally sucks, especially off-road. The YZ450F in particular is jerky unless you?®re always on the gas. Motocross riders don’t notice this, but it drives off-road guys crazy.
As far as sheer power, the WR somewhat bottled up, even with the inner baffle removed. This is still one of the quietest off-road bikes in the world, and the restrictive muffler takes its toll. Not only is power output affected, but the WR runs a little hot and can be occasionally hard to start. On the second day of riding, we took the next step down the road to making the WR into the race bike that Yamaha engineers envisioned. We installed the competition ECU and an FMF PowerCore Muffler (sold through Yamaha??s accessories department). The difference was astounding. The mild WR turned into a fire-breather. Middle and top-end power came alive. Up high, the motor gained about 1000 rpm. It still didn??t become a full-blooded YZ, but that’s a good thing.  The WR has more flywheel and rolls on more smoothly. But it has plenty of power. This marks a big change compared to the old WR, which hit a performance cap. You could unplug the old motor all you wanted, but the ignition wouldn’t let it rev very high. By making the competition ECU available, that barrier is gone. As a side benefit, the FMF muffler lets the bike run cooler and more cleanly.
But the real achievement for the new WR is in the handling department. The new frame isn’t necessarily any lighter than the one it replaced, but it makes the bike feel much lighter. The WR is narrow and agile, and you can toss it around very easily. On  the scale, the real-world weight is about the same, around 258 pounds without anything in the two-gallon tank. But it??s all about perception. The WR feels light, so as far as we’re concerned, it is light.
The suspension represents somewhat of a change in direction for the WR. Yes, the components are more expensive, but the spring and damping rates are the most important change. The WR is stiffer than it used to be. That was a real limitation  for  the 2011 and earlier version.  It was soft, comfy and cushy, but it couldn’t be ridden hard at speed. First gear trails were fine, but anything above that required caution. That??s different now. The bike isn’t quite as cushy, but it can handle race speeds. River Ranch had whoops the size of small hills, and the WR ate them up. It might run into its limitations on a real motocross course,  but it’s good for anything an off-road race course might throw out.
Overall, there were only a few bits that we didn’t love. We had a bad habit of forgetting about the on-off switch, which meant we could walk away and come back to a dead battery. We wish the tank was a little larger–it was purpose-made for this bike and is only a little larger than the YZ’s. And starting was never quite as easy as it should be. But overall, it’s a huge step forward. The new WR has the potential to run with anything that KTM has–it might not be there as sold, Yamaha has all the parts and a nice map on how to get there.
Share FacebookTwitterGoogle+ReddItWhatsAppPinterestEmail

Jordan Ashburn Interview at the first GNCC of the Year