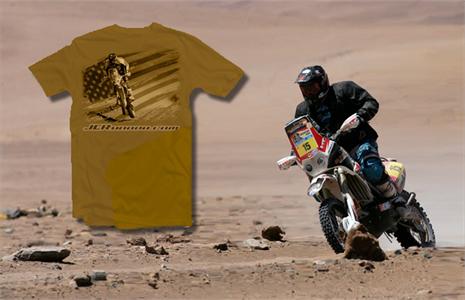 Share FacebookTwitterGoogle+ReddItWhatsAppPinterestEmail
JCR/Honda’s Quinn Cody took the world by storm in 2011 when he won the rookie of the year award and proved that he is a podium threat. Fast forward less than one year and fresh off of his dramatic win at the 2011 the Baja 1000 Quinn is now focused directly on the 2012 DAKAR that starts January 1st 2012. This could be the year that an American takes home the win in DAKAR and Quinn Cody is just the rider that can do it!

Support Quinn’s efforts to bring the DAKAR trophy to US soil by buying a DAKAR shirt https://icon1agency.createsend1.com/t/r/l/ijydby/oawfr/tl/

‘The DAKAR is like no other event and it is our chance to show the world what we are made of. I am confident in Quinn’s ability and hope everyone will join me in supporting this great effort.’ — Johnny Campbell