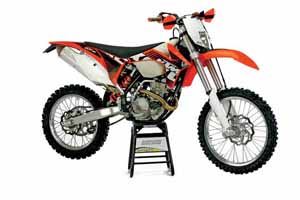 But having said that, it still isn’t quite up to the level of a YZ250F or KX250F motocrosser, which is what it will likely be racing against. At a full race pace, you might need more steam from the engine room to be competitive. There’s more power to be had, but the government dudes that control such things want to make it difficult. A full-race pipe will get you about halfway there, but you will start noticing some lean symptoms. The W’s ECU is sealed and can’t be altered with a software package. There are some piggyback EFI mod boxes available, but they don’t address spark advance, which is the real issue. The easiest way to take the W racing is to install the ECU from the motocross version. Problem solved.
HANDLING IN HEAVEN
If you’re a 450 guy and you hitch a ride on the 250W, you’ll be amazed. It’s brilliant. The bike feels like a feather. The weight itself isn’t the whole story here. At 230 pounds, the bike is light, but not nearly as light as it feels. It has something to do with displacement and rotating mass. You feel like you just became a better rider.
If you’re already familiar with this effect from riding other 250s, the W is still impressive. It’s excellent in turns and decently stable at high speeds. It has no real handling shortcomings. The suspension gets some credit here too. The fork and rear-end changes definitely resulted in a new feel. The W is cushier than it was in the past. The fork is aimed more at the trail rider than the racer and sucks up trail junk, even at very low speeds. The same goes for the shock; it’s soft, but not mushy. The target rider for the 250 class is probably around 160 pounds, which is lighter than most of our staff. Still, there were no real complaints. We might go to stiffer springs for a fast race; otherwise, we’ll add a few clicks and enjoy the ride. For the record, the compression clickers for the fork are on the bottom, just like in the old days.
In the world of trail-legal 250 four-strokes, the KTM is a thoroughbred. It’s super fast and effective. Its Japanese rivals seem heavy and slow by comparison. But the W’s real-world competitors are the closed-course 250 four-strokes, which it more closely resembles. In this field, KTM has a 250XC which is almost identical to the motocross bike. Husqvarna has a 310 (tested in this issue) that is smoother and torquier down low, but with less on top. And there’s a gaggle of motocross bikes that can be equipped with larger tanks. The W holds its own against that crowd. In the end, it’s the only bike to occupy the narrow zone between racer and trail bike, and it does it legally. o

Beta Endurocross Team Ready To Get It Done!