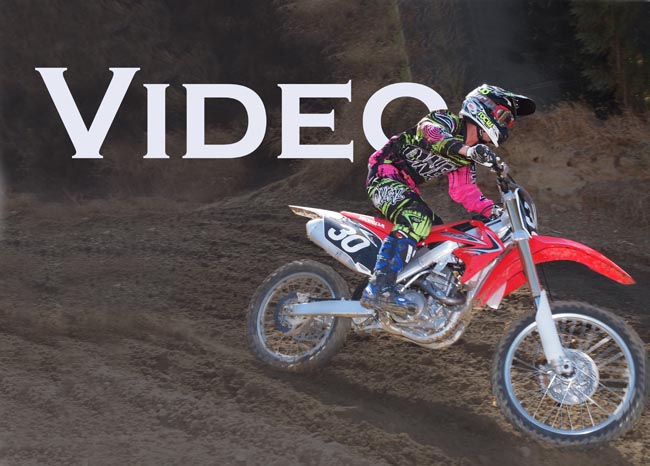 Honda was the final piece of the 250F puzzle for 2012. The new 2012 CRF250R has now been released and the testing process begins. The CRF250R actually has more substantial changes for 2012 than the Honda 450. The most significant of these is the throttle body. It’s much smaller now, going from 50mm to 46. That created the need for a number of other changes, like a new air boot. The head itself is different, mostly in the area around the intake.
Most of the chassis changes are similar to those of the 450. The linkage is new, causing the bike to sit lower in the rear. The fork and shock have been revalved. And the lower axle carriers of the fork have been recast to be stiffer. The 250 also gets larger footpegs and Dunlop MX51 tires.
We have a day of riding the Honda so far, and already we realize that there’s a big difference in low-rpm power output. The Honda has a big hit right off the bottom. Mid range and top end are in the hunt with the other 250Fs we have tested so far.
The Honda remains a light-feeling bike. Its real-world weight isn’t anything special On the Dirt Bike scale with no fuel, the bike weighs 223 pounds. That’s not as light as it was in the pre-EFI days when it was 217, but it’s not as bad as some others, like the KTM which now weighs 231 pounds (with its new electric starter).
This year, stability is improved. The CRF250R had a reputation for wandering on rough tracks. We still wouldn’t call it the most stable bike on the track, but most test riders felt it was more planted than last year’s version.
With all the 250F now in the DB garage, a full shootout stars right now. Expect individual tests to appear in print first, and a full comparison to be complete in the January 2012 issue of Dirt Bike, on sale in early December.

Check out this video from 2011 Tennessee Knockout Extreme Enduro