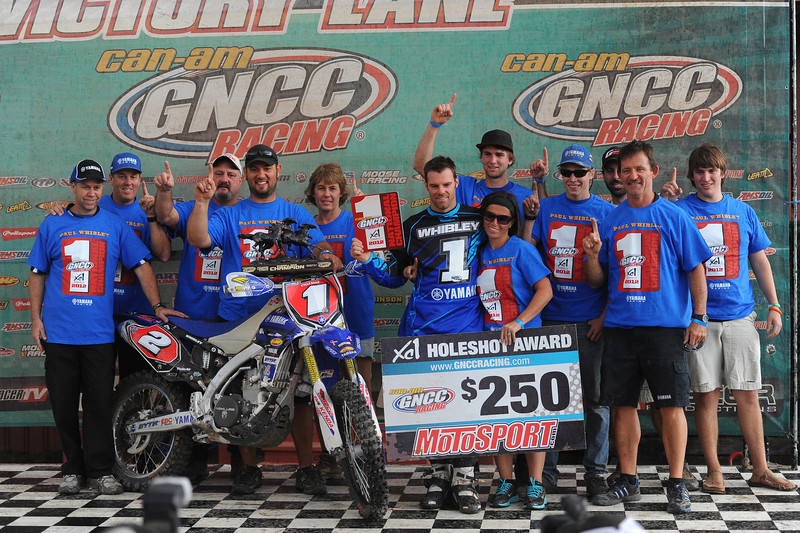 Whibley kicked off the afternoon by grabbing his thirteenth straight $250 MotoSport.com Holeshot Award, getting out front early on. Meanwhile, Whibley’s championship rival, Russell, was held up in the first corner after getting tangled with another rider off the start. Although Russell began the opening lap in nearly last place, he managed to work his way into fourth place by the start of Lap 2.

‘I just rode my own race today and couldn’t ask for the season to end a better way,’ Whibley said. ‘It’s been an awesome year, we’ve had some huge battles with a lot of the guys and it’s been exciting for the fans being this close down to the final round.’

Consequently, the much-anticipated championship showdown between Whibley and Russell never materialized. However, the season-best rides showcased by AmPro Yamaha’s Jordan Ashburn and former JNCC champ Takeshi Koikeda certainly made the race exciting as they flip-flopped the second place position during the first half of the race. Ashburn proved to be a little stronger near the end, maintaining his second place position until Russell tracked him down with two laps to go.

Shenandoah Honda/Offroadchampions.com rider Thad DuVall ran into issues early on to set him as far back as ninth place, but as the race wore on, DuVall charged his way to the front. Meanwhile, Koikeda continued to drop back and eventually surrendered the fourth place position to DuVall in the final two laps. Obermeyer Yamaha-backed Chris Bach started off strong on the heels of DuVall but the effects of an early crash set in and Bach eventually pulled off on Lap 6.

Russell continued to minimize his deficit on the leaders but it wasn’t enough to ultimately top Whibley for the race-win, which ultimately crowned the 2012 champion.

‘I just didn’t show up to ride today,’ Russell said. ‘I got taken out on the start and didn’t catch a flow after that because I pumped up really bad. I got going about halfway in but that’s probably the most tired I’ve been all year. I’m not really sure what happened.’

After an impressive ride in his home state of Tennessee, Ashburn was able to secure the second podium finish of his rookie season. Ashburn’s third place finish landed him sixth place in the championship standings, building a solid platform for 2013.

‘It’s been a lot of hard work all year,’ Ashburn said. ‘Heading into this race, I was looking for a top five finish. But when I started following Paul, I realized I could run his pace.’

‘You can’t really compare this championship to the last one in 2009, I really didn’t know what I was getting myself into back then,’ Whibley said. ‘To win the championship it was a dream come true and then to get it taken away the next year consumes you and all you want is that number one plate back. So to finally get there, it’s awesome. It’s hard to put into words the feelings and emotions and what we’ve been through to get here and hold this number one plate again.’

The XC2 Pro Lites pre-race buzz centered around the championship battle between KTM Support Rider Steward Baylor Jr. and KR4 Performance’s Jason Thomas, each separated by a mere one-point. However, F.A.R Husky’s Andrew Delong made it apparent that he did not want to be overshadowed by grabbing an early lead that he would carry to a convincing win, his fifth of the season.

UK native Jason Thomas finally carried out his dream of landing an American off-road championship, clinching his first-ever XC2 Pro Lites title. Although Delong grabbed the early lead, Thomas maintained a cool and collected pace while Baylor struggled with an injury from the very start. Baylor started off around seventeenth place on Lap 1, eventually making his way into fourth for the day.

The morning race action featured an intense battle for the Super Senior A class win that pushed Kentucky’s Greg Elrod (KTM) and Missouri’s Rick Matteson (KTM) to the top of the overall podium, in first and second place respectively. Rounding out the podium in third overall was Masters A winner Randall Riggs of Cumberland, Md. Factory FMF/KTM’s Maria Forsberg put the finishing touches on her record-setting perfect season, grabbing her thirteenth straight Women’s class win this season.

The young stars of tomorrow put on an impressive display all morning, but it was West Virginia’s Kevin Sutphin (KAW) who took not only the Super Mini (14-15) class-win, but also the final Youth overall-win of the season. However, Pennsylvania’s Kaleb Ward (KAW) came through for second place less than eighteen seconds behind, while topping the Super Mini (12-13) division. Virginia’s Luke Ross (HON) earned the final spot on the podium.