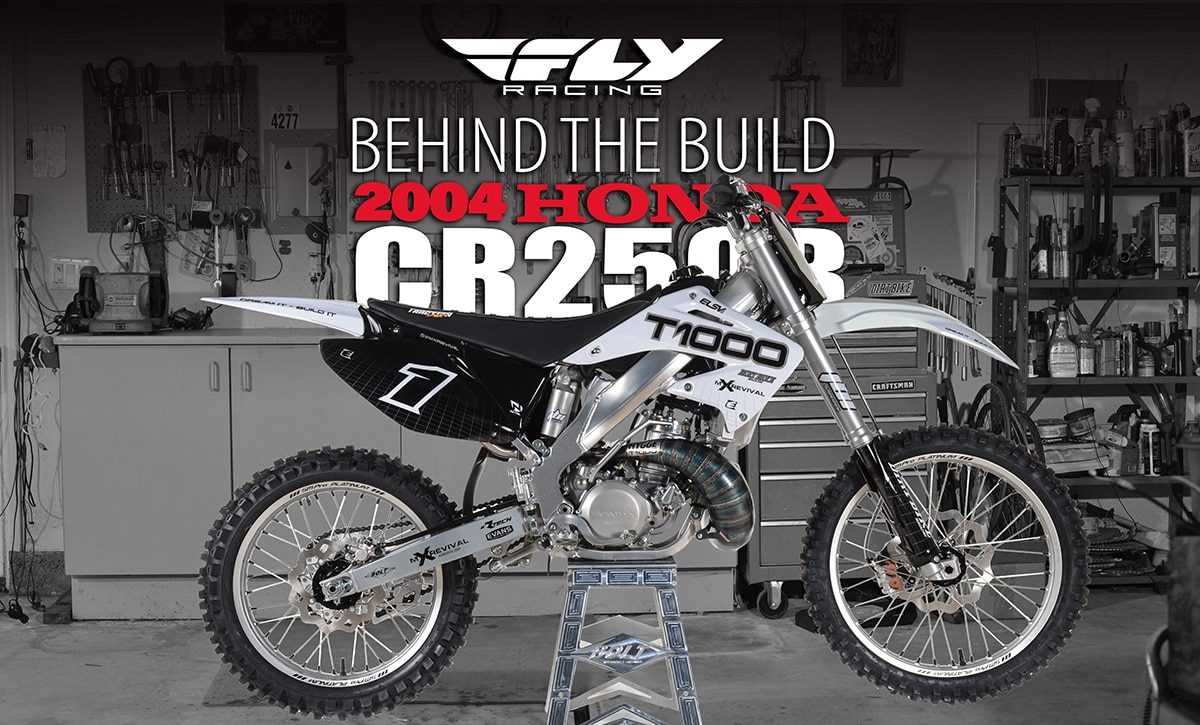 In 50 years of existence, Dirt Bike Magazine has never started off a build the same way as the MX Revival T-1000 Honda CR250R. We wanted to give an unknown bike builder a chance for some exposure, so naturally we did what any modern company would do—we asked our social media followers for some recommendations. Charles Lytle from MX Revival was the overwhelming crowd favorite. After a couple of hours of initial phone conversation, Charles was confirmed as our next builder, and the project officially started.

During every project bike build there are always huge amounts of things happening behind the scenes, and this build was no exception. Charles picked up our extremely roached-out 2003 Honda CR250R after attending a Supercross at the famed Anaheim stadium in SoCal. After getting it to the NorCal headquarters of MX Revival, he started working on it immediately by tearing it apart and assessing the damage. This didn’t take long—after all, he is a very knowledgeable motorcycle mechanic. Charles quickly realized that what initially looked like a easy, straightforward, “build back better” project was actually going to have some major challenges. And then, again, something happened that had never happened in Dirt Bike Magazine history—COVID-19 hit, and the world came to a screeching halt!

Since the global lockdown, almost all the aftermarket-parts progression in one way or the other halted. If they were in stock, they couldn’t be shipped, and if they were in production, they couldn’t be finished. Everything was locked down. Charles was also locked down inside his shop, cleaning and re-cleaning parts in his vapor-blasting machine. Anything that fit inside the blast cabinet got blasted—frame, swingarm, cases, hubs, brake assembly, airbox, radiator hoses and much more. Surprisingly, most items came out looking better than when they went in. Vapor-honing machines are pure magic, and Charles has perfected his craft. This is the point when the theme of the build started taking shape. The name, “T-1000,” refers to the liquid-metal character used in the famous Terminator 2: Judgment Day movie that came out in the early ’90s. So rather than go crazy with color-coating, MX Revival decided to utilize the raw-metal look as much as possible and, in some cases, actually re-plated the OEM Honda parts himself.

Even though during the bulk of this build the world was locked down, MX Revival managed to incorporate the use of many aftermarket companies in key areas. Brand-new Bolt Hardware fasteners were used throughout the build, replacing lots of the OEM Honda hardware, except in areas like linkage bolts, axles and engine-mounting hardware that are specialty items. Ride JBI handled all the suspension needs and worked with Sano Metal Finishing in Southern California to come through with their own creation for the T-1000 build—an REM Superfinishing rear shock spring.

Starting with a brand-new spring, the factory coating was first stripped to raw steel, then the spring was put through the REM Superfinishing process. This process polishes the steel spring to bring out the luster and an ultra-smooth finish.

Finally, to keep the spring from rusting, a clear ceramic coating is applied to lock in the look. SM Pro Platinum wheels are designed to be ultra lightweight, extremely strong and every set is custom built to order. The T-1000’s wheels are running a special matte silver rim finish to tie it all in with the vapor-blasted liquid-metal theme. Black-anodized nipples and hubs with custom laser-etching create a little contrast, making certain items really stand out.

The engine remained a stock bore and stroke, but was completely torn down, inspected, sent through the vapor-blasting process (sometimes more than once to get the desired look), and then fully rebuilt by the crew at Haeseker Racing. This build utilizes a CNC-machined aftermarket head built by the crew at Phathead Racing to increase performance and improve cooling. The Phathead design has interchangeable combustion chambers that are easy to change and aren’t crazy expensive to buy, making custom modifications inexpensive to try.

A Lectron carburetor replaced the almost 20-year-old OEM model, and a new Moto Tassinari VForce reed intake system would help monitor the amount of fuel flowing into the rebuilt engine. Hygge Performance is a company based in Canada that produces completely handmade two-stroke cone pipes that can be customized to produce the type of performance needed for specific applications. The exhaust used on our T-1000 build was designed to enhance performance throughout and was teamed with a Pro Circuit Factory Sound silencer. 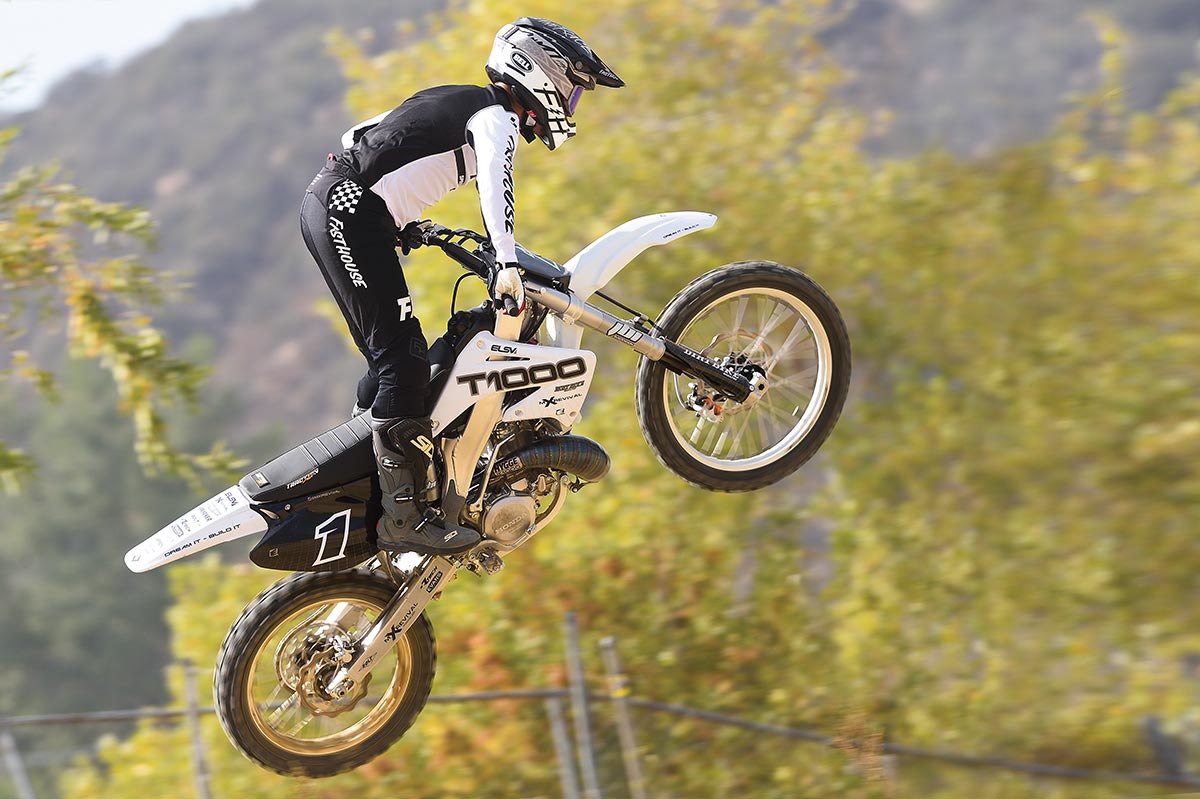 Through countless struggles over an almost two-year period, Charles and his crew at MX Revival made the almost impossible happen. What used to be a crusty shell of an engine riddled with Heli-Coils and a seized cast-iron bore cylinder is no more. The T-1000’s engine has been brought back to life by Haeseker Racing with a fully rebuilt engine, new OEM cylinder, Phathead racing cylinder head, a micro-polished transmission, and one-off carbon fiber parts that we guarantee you won’t find anywhere else.

The chassis is a complete work of art that, when delivered to the studio, was cleaner than most people’s dining-room tables. We literally didn’t want to ride this bike for fear of scratching it or getting it dirty. When every build starts, we usually have an idea of what the finished product is going to be, and most of the time we’re not that far off of what it actually becomes. The T-1000, however, is one of those builds that is so far from the vision in our heads that it makes you step back and really appreciate someone’s dedication to their craft.

We have to thank our social media following for introducing us to Charles Lytle at MX Revival, and now look forward to working together on many more builds in the future.