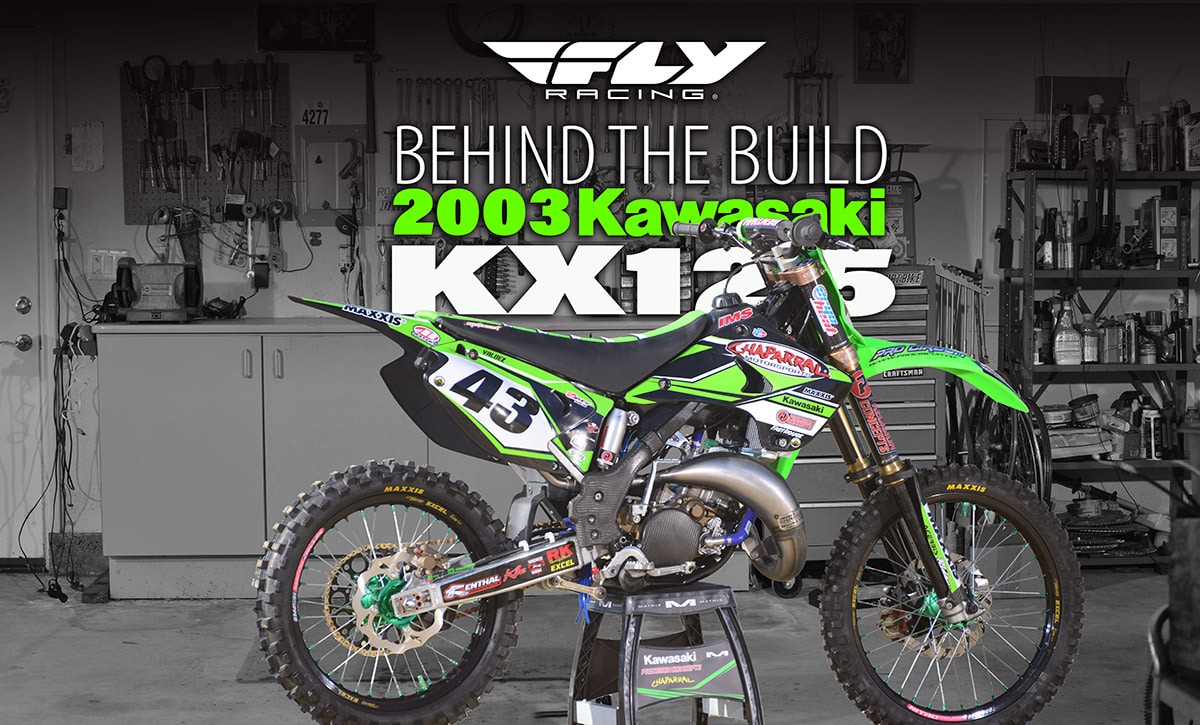 For Precision Concepts race team’s lead mechanic Phil Valdez, the 2003 Kawasaki KX125 was a special bike. He purchased and raced one while working at Pro Circuit in Corona, California. While most of us can only look back on memories of our favorite machines, Phil has been able to bring those memories back to life.

One of the crucial pieces to the build was the original engine that featured numerous factory-level modifications done in-house by Pro Circuit’s race team. After recovering the engine, Phil completely disassembled it and sent all of the internal parts to Josh and the crew at CryoHeat. There the internals were micro-polished, tumbled, and sent through CryoHeat’s proprietary process to strengthen the metal, lessen friction, improve performance, and reduce operating temperatures. The cylinder had already been ported by Pro Circuit and, after being rebuilt, was complemented with a V-Force reed valve and special Pro Circuit Works pipe with a Ti-2 carbon/Kevlar/titanium shorty silencer.

Another major feature of the bike was the suspension. The works A-kit fork and shock were previously used by James Stewart before Phil acquired them. For this build, the suspension internals were also sent to CryoHeat to undergo the same process as the engine. Bob Bell at Precision Concepts was more than happy to customize the suspension settings to Phil’s preferences. After all, Bob and Phil work side by side every day. Phil contacted Embee Performance  to have his frame powdercoated black and get it looking like new.

After he took care of the motor, suspension and frame, Phil went to work tying together the remaining loose ends with aftermarket bolt-on items. He affixed Renthal bars and a GPR Version 1 stabilizer to the original Pro Circuit triple clamp. A’ME and ARC handled the grips and controls. Kite anodized-green machined-aluminum hubs with Excel black rims added big points in the style department and increased durability. We wrapped those with Maxxis SI tires and Nitromousse nitrogen-infused polymer inserts to eliminate the possibility of flats.

Renthal sprockets and an RK chain would help transfer all the power of the rebuilt engine. We added a Galfer 270mm oversized front rotor kit, rear rotor and steel-braided lines from Core Moto. The radiator hoses and carburetor hoses were all replaced using matching blue kits from Moto Hose. The seat had seen better days, so we installed a new MotoSeat foam and a gripper cover. Acerbis handled the plastic, including an updated 2017 front fender and number plate, and Ryan from Rad Custom Graphics made a replica graphics kit of the Chaparral Motorsports/Precision Concepts/Kawasaki race team graphics.

A few pieces added bling to the build, such as a bronze Cerakote finish on the brake calipers that matched the side cases. The carbon fiber clutch cover, ignition cover and other carbon fiber guards date back to the Eric Sorby days. There’s also a bit of unobtainium in the spark plug and spark plug cap, which are straight from factory Kawasaki. The brake pedal is factory as well, and IMS made special Core foot pegs to fit the 2003 Kawasaki. It all came together to produce a motorcycle that any bike collector would drool over.

When you spin laps on Phil’s machine, there’s no way to fight back the smile on your face. The lightweight rideability of the KX125 makes you feel like a hero, and the engine has loads of power considering it is a 15-year-old 125. We were definitely surprised by the suspension, which works great pretty much anywhere. Bob from Precision Concepts informed us he has much stiffer suspension settings now than before all the internals went through the Cryoheat process. This KX125 takes us back to a time when this machine was the cream of the crop in the MX Nationals. In those days, the likes of Sorby, Stewart and Roncada were racing around the iconic circuits. With this 2003 KX125 in his garage, Phil has a constant reminder of his past, and a way to relive that excitement while making new memories at the track. We are very jealous!