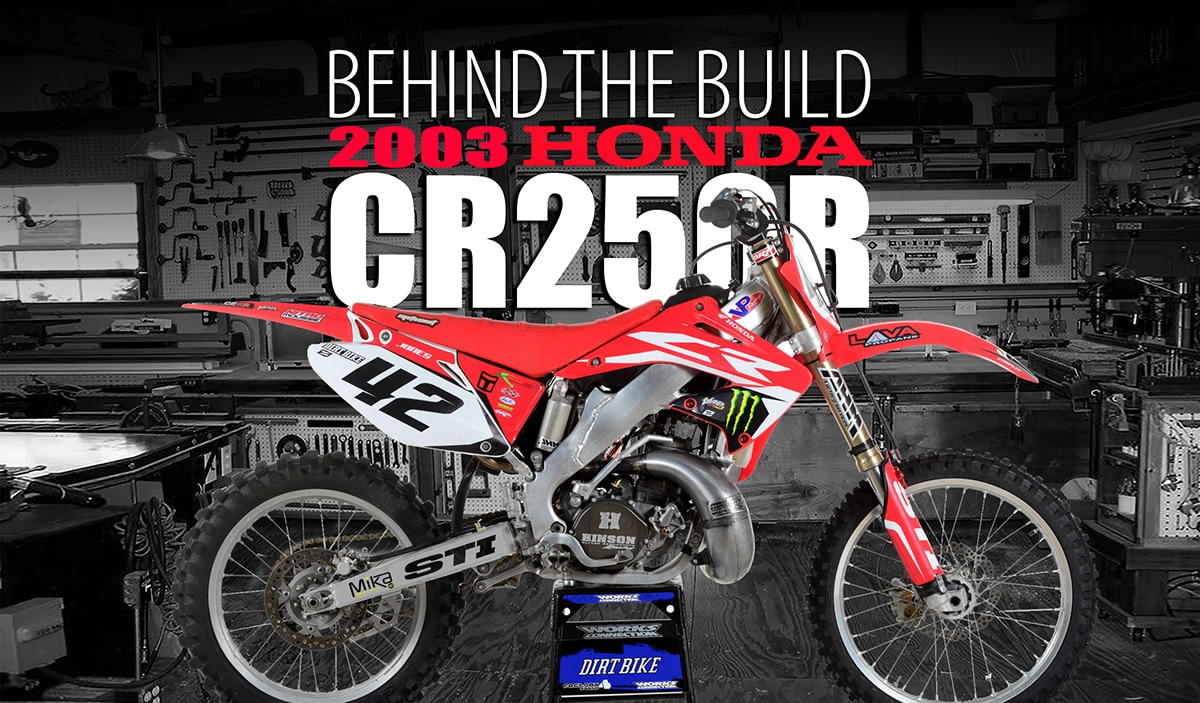 The MTA 2-stroke Championship is a fascinating mix of new bikes and restoration projects. Dirt Bike test rider and ISDE Junior World Trophy champion Justin Jones has been on a mission to win the Championship since a last-lap DNF cost him the 2015 win. This is his story from the classic Glen Helen race last April.

The results will read that I finished ninth place at the 2018 MTA World Two-Stroke Championship in the Open Pro class. It’s not my most notable finish, and it probably won’t be on my resume. What the results don’t tell you is the weird story of how I even got to the start line and the path that my bike—a 15-year-old Honda CR250R—took to be there with me. I had a vague master plan to race my brother Greg’s 2003 Honda in the Open Pro class at the MTA World Two-Stroke Championship at Glen Helen Raceway. The desire and goal were clear; the details, the means and the time to make it happen, not so much. Even the actual ownership of the bike was a bit confusing. My best friend, Jon Rice, originally acquired the bike through barter for electrical contracting. It was ugly. The wheels were spray-painted, there were hand-grabs cut out of the airbox, it was severely looped out, and it ran no better than it looked.

Jon eventually lost interest and cut a deal with my brother Greg for the bike. It would cost him a few cash payments mixed in with a little beer and unspecified favors to be named later. I might add that it still isn’t paid in full and is currently accruing interest in beer. Phase one of the restoration took place when Willy Musgrave at MRC rebuilt the motor to its original running order. I admit that I completely ignored this project at that point, which I regretted one week before the race. Greg was persistent in getting more life out of his rattling ripper when he first received it, as he considered running race fuel. I didn’t want to help him jet it, nor have I seen a Mikuni jet in about eight years. “No you’re fine!” he said. “The bike only pings a little; mix it rich.”

For a year I heard how great the bike ran; “No issues! Loads of power! New water-pump seal!” When I formed my plan, I remembered all of Greg’s glowing remarks and decided to take on the project. I had one month before the race. I expected it needed some love, but there are some things even love can’t fix. The 15-year-old bike looked pretty clean, but my eyes were fooled by a can of SC1. After talking to Mark and Ron at Dirt Bike magazine, they had less faith than I did. Their experience at old-bike revival is much deeper than mine. Mark’s offer of help went in one ear and out the other. After its first cleaning, I realized it needed another, and another. Come to think of it, I’m still not completely satisfied.

I soon realized that my prior information from Greg had questionable accuracy. I started it on the stand in the garage and found that the bike ran rich on the bottom and pinged on top. It had a semi-squeaked piston and a power valve that had seen more oil than my dad’s 1966 Triumph Bonneville. The 2003 CR wasn’t known for its peak horsepower when it was new, and the KTMs and Yamahas that I would be racing against are much, much faster. The best option was to have Terry Varner at Varner Motorsports work his magic. Varner is the mad scientist of getting optimal performance out of any two-stroke, especially the Honda.

Upon connecting through a mutual friend, Terry was delighted to help me out. I begged, borrowed and stole from every old friend I could to make sure I had the proper equipment to be competitive. As my deadline ran closer, bad luck and poor judgment took a progressively bigger toll. The linkage seemed to be well-greased, but it turned out to be grease on top of damaged needle bearings. That’s not the same thing. The brakes were a mess. The front master cylinder made creaking noises and didn’t do anything until the lever hit the grip. The rear brake was non-existent. I spent every late night in the garage, mostly in disbelief with weakening patience. The random things got to me, like a forgotten leaky radiator, or a 15-year-old O-ring that didn’t drip until you looked at it. Every little setback accumulated into a large amount of wasted time. One week before the race, what was left to do? Everything. Brandon at AHM Factory Services called on Tuesday: “Your forks are junk! Who worked on these before me?”

“No clue,” I replied. “By the way, I’m sitting in front of your shop right now to pick them up. They’re done, right?” Brandon explained that the damping rod threads were completely stripped on both fork legs. After assessing the situation, I spotted a set of 47mm Showa forks standing in the corner. The owner? Mark Tilley! I told Brandon to use those, and that I had asked Mark to loan them to me. That was a lie, but I could deal with Mark later.

This type of black cloud continued to chase me all week. The problems varied from dealing with old broken junk to parts not showing up. Worst of all, I didn’t have time. I have a full college class load during the day, so I spend every night putting all the pieces together. At midnight on Thursday, the brake-pedal bolt broke off. I had planned to test it first thing in the morning, but that all changed. Thursday morning I called every local shop around to find the correct bolt, as my newer Honda parts were not the same. I finally found one in stock! 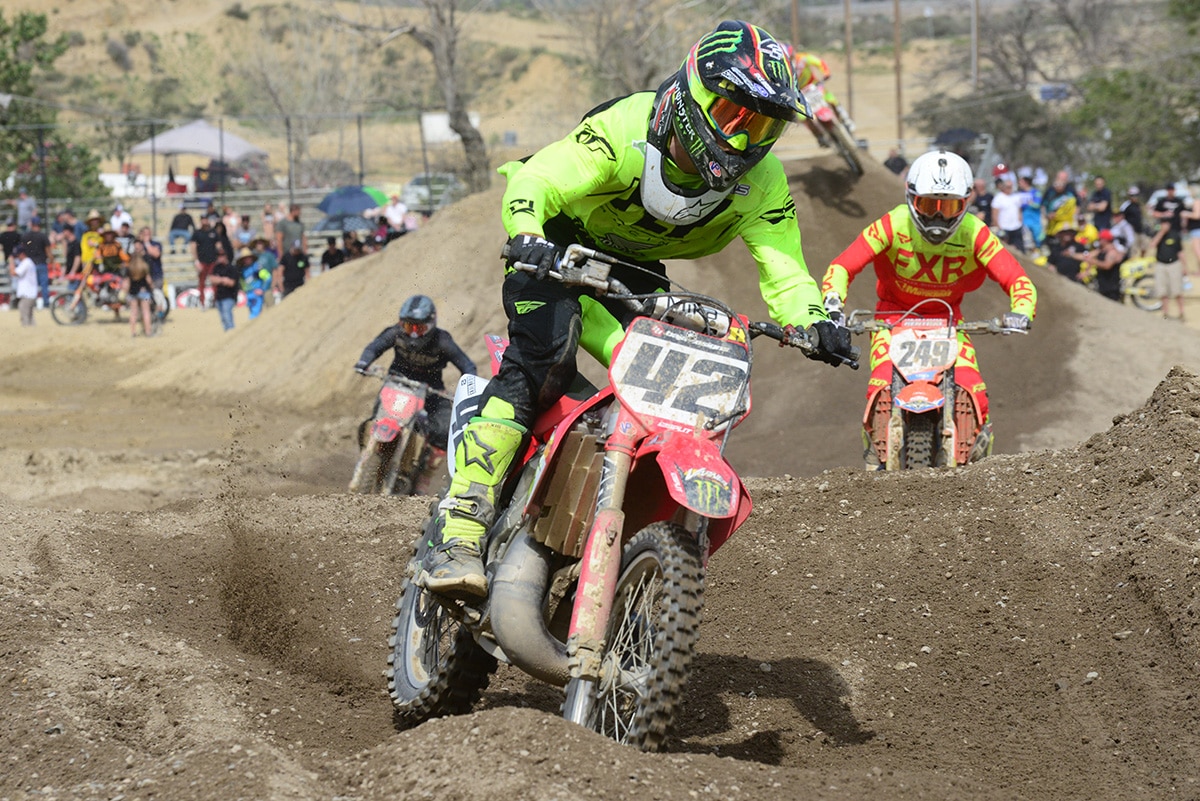 After burning my entire morning, I headed to the track around noon. I hadn’t ridden a two-stroke since last year’s event, and to say I struggled was an understatement. I lost feeling of both hands within a lap, and I air-wheelied over every jump. The bike wasn’t a problem at all. It ripped! It was faster than any Honda two-stroke I had ever ridden. My testing time was cut short, as I had to return to class by 3 p.m. Luckily there was a two-stroke-only practice the following day. My friend Casey Casper offered to come out and help dial in the machine, which turned out to be a huge help! He and his dad race these bikes weekly and have accumulated a vast amount of knowledge about them. Towards the end of the day, the bike was drinking coolant, which meant one thing—water-pump seal. Casey explained this was a common issue for this model, so I didn’t stress our diagnosis. After another motorcycle-shop excursion, I successfully tracked down the proper parts. However, the exchange of this part was far from easy. The original seal had been put in backwards, plus a gasket and spacer were missing from the cover. This, in turn, caused the impeller to grind away at the water-pump cover. Of course, I only bought one replacement gasket, so I used my Gary Jones MacGyver skills to create another gasket and the necessary spacer to bandage the issue. Friday night before the race I hoped to finally get some sleep, but it was spent putting the final touches on a motorcycle that seemed to never be finished. Besides the janky seal, it was mostly cosmetic with Split graphics, STI tires and a fresh Hinson clutch.

In the morning, Lawson snapped a few shots of my finished product. It didn’t look perfect for the amount of time I invested in it, but I was proud and determined to show what it was capable of. Tilley noticed the forks: “Hey, are those the original forks?” “No,” I replied. “I believe they’re off a 2008 Honda CRF450R.” Tilley seemed confused. “No kidding,” he said. “I just dropped off a pair exactly like that at AHM.”

“Hmm, yeah, that’s weird,” I said. During practice the bike ran great, and I was starting to jell with it. I spaced out, however, and didn’t check the tire pressures, resulting in a front flat tire. As an avid off-road racer I run bib mousses and rarely run tubes, so I felt no shame. After practice, Varner did some jetting adjustment that made the bike run even better than I thought it could. My confidence was high going into the first moto, but soon shattered on the parade lap. Going into the first turn I tried to grab another gear and felt nothing. My heart completely sank. I thought for sure the shift shaft had broken, but upon a closer look, I noticed the shifter itself had broken! Fifteen years without issue and it had to break then. There was bound to be another old Honda 250 around with a shifter that fit my bike; the first one I saw was Ron Lawson’s. I scrambled for a wrench and ignored the fact the he explained his moto was directly after mine.

Despite missing the parade lap, I put myself in great contention for a first-moto podium when I received another flat—this time a rear. After everything I had been through, I was not going to quit. I succeeded in riding the entire race in 10th until the tire finally came off the rim on the last lap, which put me back to 19th. Eventually, I found the source of both failures—a faulty tire gauge. I’m not sure why I trust the same gauge that’s been bouncing around in my van on numerous Baja trips, but that’s another story. For the second moto, all the planets aligned and I rode a great race, battling with some very fast guys for a fifth-place finish. I’m surprised that the second race went so flawless, because the bike still gives me fits. A week after the race, the petcock started leaking and my garage was covered in precious VP MRX02. In reflection, I’m not sure what is to blame anymore. I was the one that put everything together. During the photo shoot with Lawson, I completely forgot about my shifter situation. I used a pair of vise grips and proceeded to be stuck in second gear all day. I’m sure Greg really wants his bike back, but I’m not giving it back. It’s not his, anyways.–Justin Jones