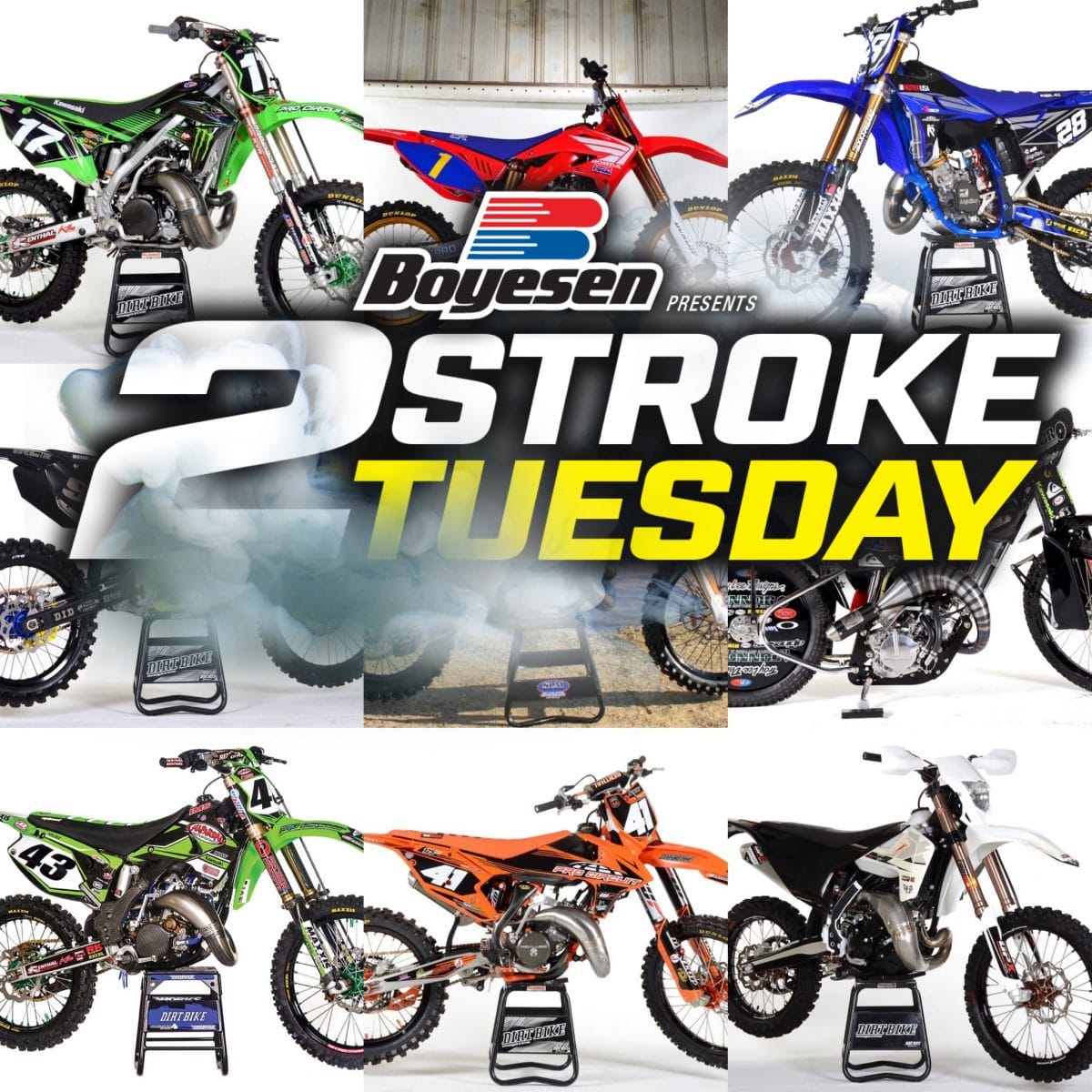 On this week’s Two-Stroke Tuesday brought to you by Boyesen we take a look back at some of our popular 2-Stroke projects from 2018.  We have Honda’s, KTM’s, Kawasaki’s, Husqvarna’s, Suzuki’s, Yamaha’s and some that are yet to be determined. To see more on each build just click on the image. Do you have a favorite?

As you can see “The Legend” Honda build pays tribute to David Bailey and his number one plated Honda days back in the ’80s.  ZLT designed a set of graphics with Justin from Motowhips that provides a clean classic look and really makes the build stand out.

This machine was built for DB staff member Ron Lawson to race West Coast GP style events that combine motocross, off-road and pavement sections into a 45 minute race. Internally the only major change was a Rekluse Radius CX clutch system that combines their Torque-Drive, Core and Auto technology into one compact unit. We added V-Force Reeds and a Pro Circuit exhaust for some additional engine performance.

The SLM Racing KTM 440 is a mix of old and new school technology . The power plant is a 1995 KTM 440 big bore and they placed that in a modern KTM two-stroke chassis. The engine features a laundry list of modifications. Just visible in this picture are billet ignition cover, Lectron Carb, Samco hoses, Boyesen RAD Valve and check out that custom aluminum airbox.

Everything on this 2001 RM125 was either replaced, rebuilt or refinished. The frame, swingarm and subframe was coated by Chris Johnson’s crew at San Diego Powder Coating.  The frame has metal flakes that sparkle in the sunlight.

Cameron Hunt gives the Dirt Bike staff an exclusive inside look at his extremely clean 1986 Honda CR250R project in his own words inspired by an article in our July 1986 issue about building an RJ replica. Jim Bacon aka “Bones” Worked his magic on the suspension which to my surprise had been upgraded at some point to the 87 cartridge forks. They even had to make new dampener rods for the forks. I think just as much work went in the suspension as did the motor.

This is another machine built by Jon Primo that looks great in pictures but in person blows you away. The 2018 KXF plastic is mounted using a kit designed and built by Jon. The carbon fiber clutch cover was made by Carbon Factory. This company was located in SoCal back in the mid 2000s but has since disappeared . If you find one of these buy it! The Pro Circuit Works pipe is still in there production lineup.

65cc machines are no longer just for riding around camp, they are full race machines and companies are making tons of aftermarket performance products for them. Our latest Husqvarna TC65 build uses items from FMF, ProTaper, P3 Carbon, Dunlop, and much more!

Pro Circuit put a ton of time into developing the engine on our KTM125 including designing a new exhaust that not only produces more power but is also lees likely to be damaged. The crew at WP dialed in the AER Cone Valve fork and Trax shock for out specific application and the Pro components are worth every penny!

Seventy-five percent of this bike build was done in Sweden and the other twenty-five percent was done traveling the world acquiring the parts to complete it. Christian the owner of KRT spends lots of time traveling. The entire machine was rebuilt from the ground up using companies like All Balls, Pro-X, Boyesen, BRT, Acerbis, Mansson Racing, Fuel Star, Bolt Motorcycle Hardware, and Pro Circuit.

Yes this is a 2001 and no the Polisport CR Restyle kit does not bolt right up. This project was updated with 2003 gas tank, subframe and airbox before the Polisport kit was installed. As you can see there are a host of companies involved on this build including Bolt Motorcycle Hardware, LA Sleeve, Faster USA, Factory Connection, Tag Metals, TM  Designworks, Maxxis Tires, Boyesen, Samco Sports and the list goes on.

This 1988 KDX200 was about nine month process. It all began when Ron Lawson decided he wanted to ride the ISDE in a proposed vintage class. Ron found a semi-running ’88 Kawasaki KDX on Craigslist for $425 and started work. What followed was a long period of frustration and dead ends that included the bike blowing up at the Adelanto GP in February.

The original bike was built for Connor in 2001 when he wanted to give speedway a try. Andy Johnson and Donnie Odom sponsored Connor and he raced a few local races but gave up the Speedway racing because of his passion for motocross and off-road. After Connor passed away, we wanted to track down his old speedway bike, restore it. The bike is on display in the Connor Concrete Cutting office to give everyone a little reminder of his passion for two wheels.

The 2018 Ransom KX500AF is finally done and trust us it’s worth the wait! On this week’s Two-Stroke Tuesday we give you the exclusive first look at this extreme machine brought to life by custom bike builder Wayne Ransom. All the specs will come at a later date but for now enjoy the artwork and some words from Wayne himself about his influences on this build.

The Faster USA 2006 Yamaha project started out as a $1,500 purchase on Craigslist and ended up as one of the trickiest YZ125 builds we have ever been apart of. Check out that frame powder coated a metallic blue by San Diego Powder Coating.

The BRC 500 is the world’s first fully modern (’07-’17) open class two stroke engine kit developed as a drop-in conversion (retrofit) for modern KTM/Husky two stroke off-road motorcycles. As a drop-in kit, the BRC 500 allows customers to build a true “custom” motorcycle. Depending on the donor engine configuration you can build a lean & mean open class motocross bike or a purpose built off-road racer with electric start, lights a 6 speed transmission and off-road armor.

Classic lines with modern technology hidden underneath. “The Unit” is one deadly machine!

The GPX Moto TSE250R is one of the first full size off-road two-stroke dirt bikes we have seen come out of China. Is it designed to go up against what Yamaha, KTM, Husky, Gas Gas, TM Racing and others have out on the market now? We don’t think so. The TSE250R is a entry level machine and is priced accordingly at $5,600.