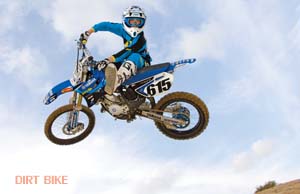 The staff at Dirt Bike magazine is caught in a bit of a conundrum when it comes to Yamaha’s two-strokes. On one hand, we need to applaud Yamaha for continuing to make competition-worthy two-stroke motorcycle for all classes. On the other hand, we’re bummed that the most recent major update to the 125 and 250 happened way back in 2005 and the YZ85 hasn’t really changed since its introduction. We took it upon ourselves to take these three timeless Yamaha two-stroke classics and give them a 2012 update.

The chassis got major updates also. GYTR offers a complete Super Mini chassis kit that includes longer front and rear brake lines, a longer rear swingarm, bushings, bearings, collars, oil seals and plugs. We topped it off with front and rear GYTR wheels through Dubya USA utilizing Talon hubs, spline-drive heavy-duty spokes and Excel rims.
With the major updates completed, Hoeft bolted on a GYTR chain and sprocket kit and Tag bars, and Factory Connection handled all the hard work in the suspension department.
The Yamaha ends up compliant with both AMA and NMA rules for their respective Super-Mini divisions. It is, basically, the cream of the class. At the time this magazine was printed, Hoeft was having a very successful year, winning numerous amateur championships at such events as the World Mini Grand Prix, Mammoth Mountain Motocross and, the crown jewel, Loretta Lynn’s AMA Amateur National Championship.

DOS AMIGOS
Even though the YZ125 has had a long run without big changes, it’s still considered the best 125 motocross bike. It might not have the sheer power of the KTM, but its suspension and handling are still stellar. When you talk about two-strokes, it’s hard to mention the 125 without cracking a smile—they are just flat out fun to ride! Here is what we did to make the YZ125 even better.

Enzo Racing probably has the most testing time with the KYB components that are stock on the YZ125. Ross Maeda, Wil Decker and Craig Decker have countless hours logged supporting all the factory and privateer race teams of the era when two-strokes reigned supreme. So, it seemed like an easy decision to have them work over the suspension. Applied Racing’s new R/S triple clamp set gave us the option of running rubber- or solid-mounted bars with loads of adjustability.
We used Warp 9’s complete wheel sets with blue hubs, black spokes and black rims. The rear wheel comes equipped with a brake rotor and sprocket, while the front includes the brake rotor. We also installed Ride Engineering’s steel-braded brake lines to give us that extra stopping power.
With all that, did the little YZ become a 250F killer? Not quite. The age when an over-bored 125 can hang with a 250F was over some time ago, but there isn’t a rider on earth who wouldn’t dig the 144 for the sheer fun factor. It loses a few revs on top, but the low-end power is vastly improved. With all these improvements, our YZ125 not only looks updated on the outside, it feels updated on the inside.
TRES AMIGOS
The YZ250 has seen many years come and go without any major updates. 2005 was the last year Yamaha updated their YZ250 by adding an aluminum frame. The formula for building a ripper YZ250 two-stroke has been set in stone for years now, so pay attention, here it is.