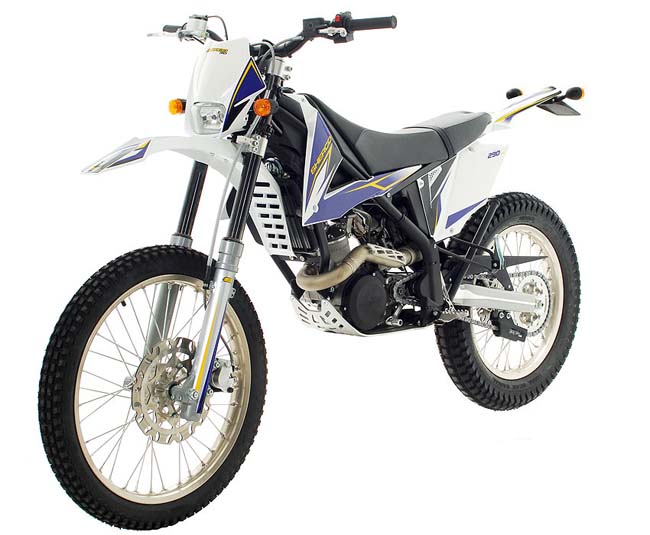 Ryan Young imports recently released information and pricing on a very cool new bike. We don’t know exactly what category it fits into, but the new Sherco X-Ride 290 falls somewhere between a trials bike and an off-road bike. In Europe, it’s street legal, so it might also fall into the dual-sport category (but not here in the states). The price will be $7900. The Sherco X-Ride prototype bike was revealed at Milan in 2011. Since then the Sherco team has been working to bring it from project to production. This new model will be produced at the factory in Caldes de Montbui (Barcelona). Here’s what the Sherco press release has to say:
The X-Ride is not a race bike, but it draws from all of the vast experience that Sherco has gained in Trial, Enduro and Supermoto. Away from the race track and racing aspects, the X-Ride is able to satisfy any desire for adventure, whether it is riding on narrow single track, complicated trials type riding or on fast tracks(*). It is even versatile enough for use on city streets. With a fuel tank capacity of 7 liters (1.85 gallons) and excellent fuel economy the X-Ride can take it’s rider for a long distance without having to refuel. With a ground clearance of 325mm (12.8 inches )the X-Ride allows you to overcome obstacles of considerable size with ease. With a total weight of only 92.5 kg. (203.93 pounds) the X-Ride has performance without equal. The production of the new bike is a reality and the first units have already left the factory. The new bike is being produced at the Sherco factory in Caldes de Montbui where the trials models are also produced, where they will be distributed to all five continents.
Share FacebookTwitterGoogle+ReddItWhatsAppPinterestEmail