2 STROKE TUESDAY : BROUGHT TO YOU BY RYDCREW.COM 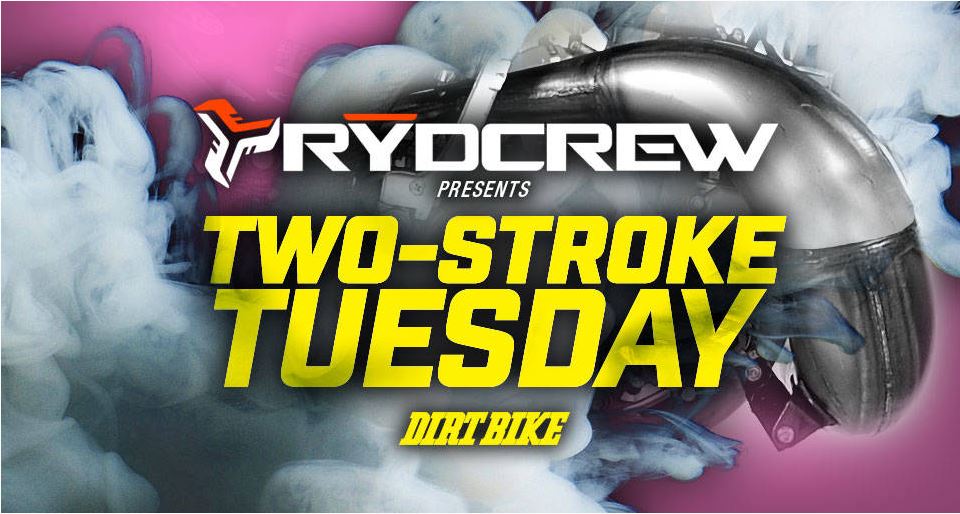 In this weeks 2-Stroke Tuesday brought to you by RYDCREW.com we give you a sneak peek at “Big Bird” our 2003 RM250 build, show you how to join the Two Stroke Revolution where you can win a 2016 YZ250X, uncover some hot two stroke products and explain the Two Stroke offroad shootout 30 years in the making ! CAN YAMAHA STOP KTM ? 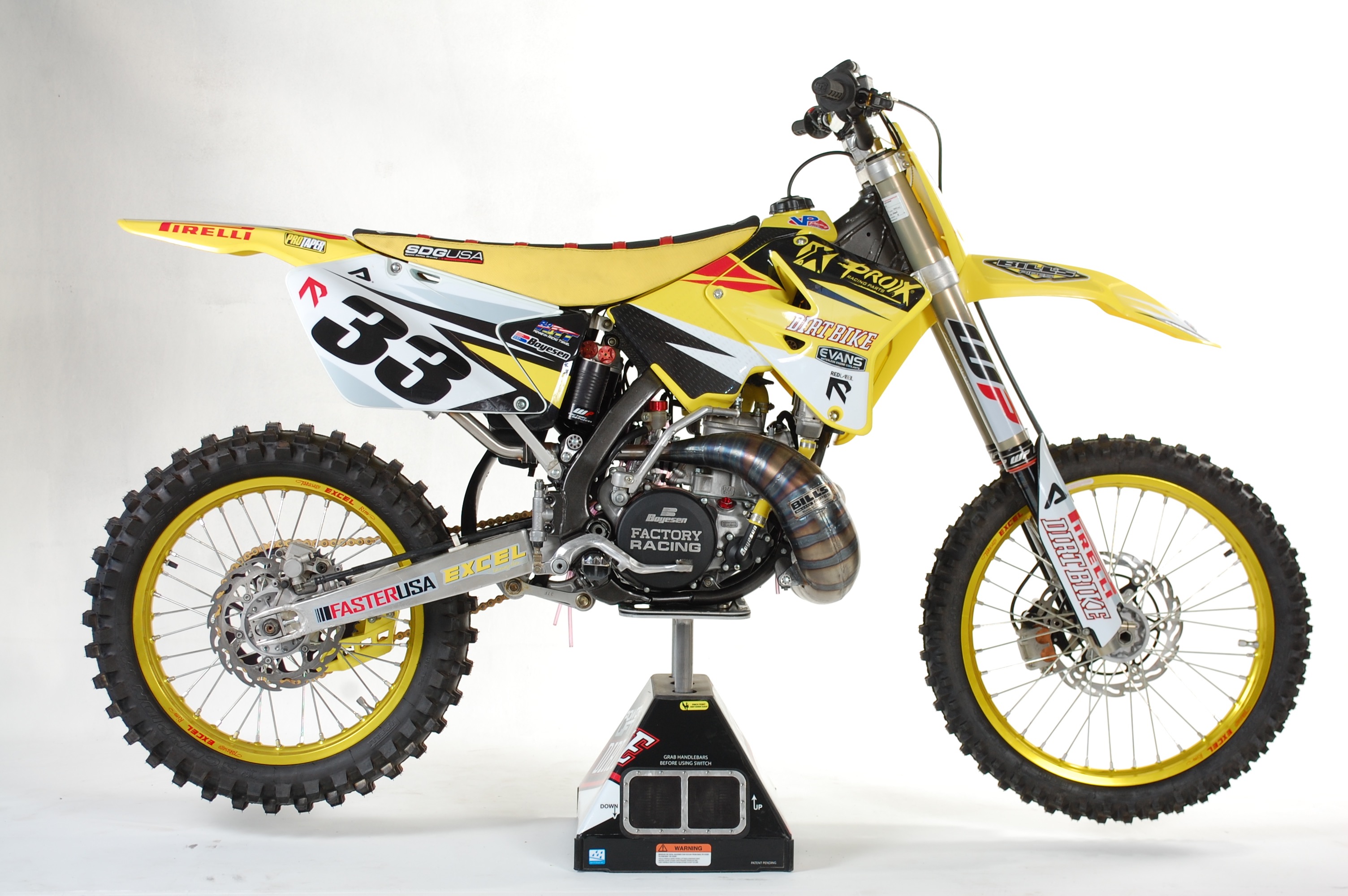 If you follow us on social media then you are familiar with this machine know as “Big Bird”. Its a 2003 RM250 that was rebuilt from the ground up and yes that is WP suspension ! 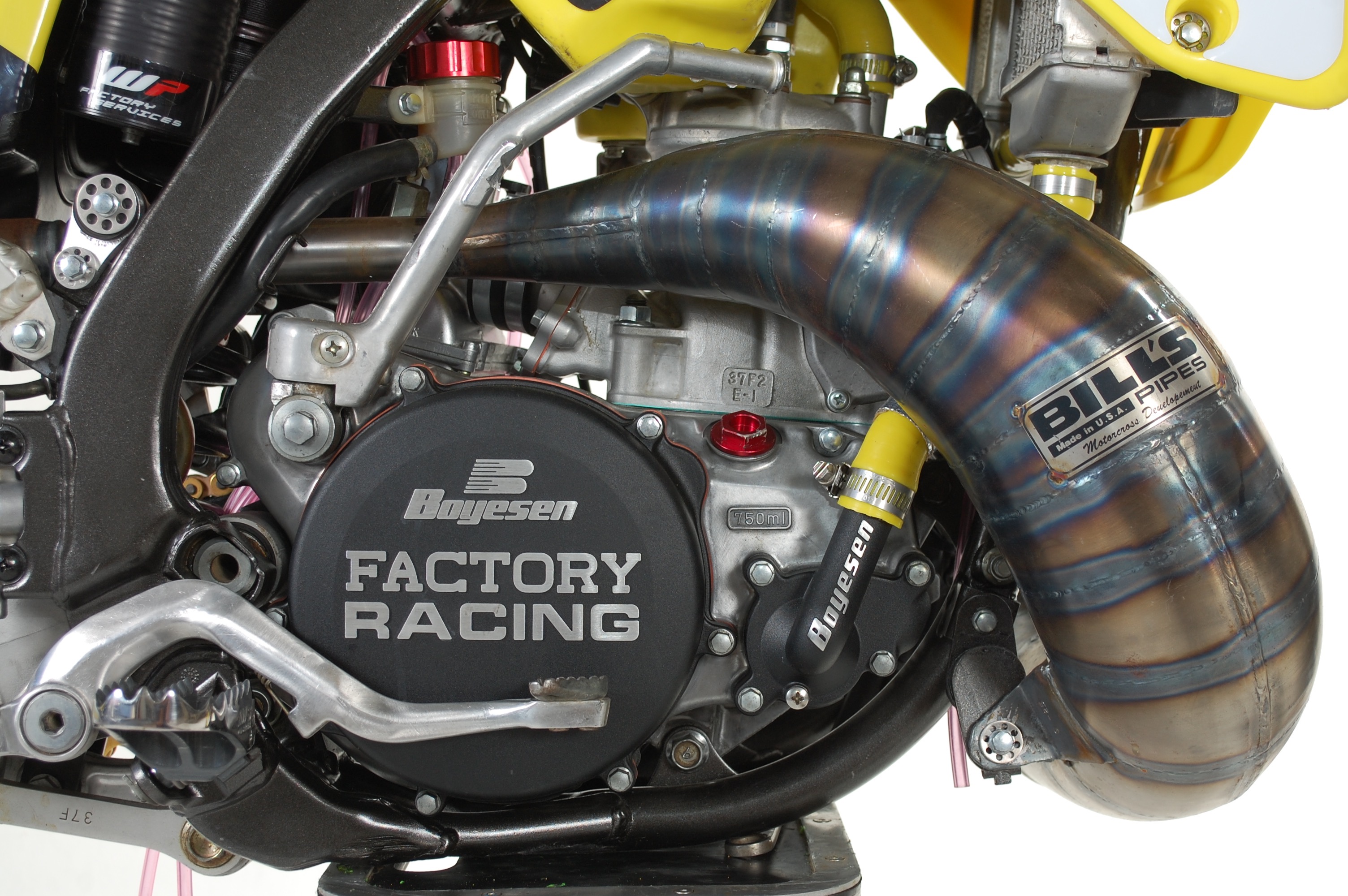 The engine was gone through by Mark and the crew at LA Sleeve using Pro X parts . Check out that Bills Pipes cone look pipe !!! 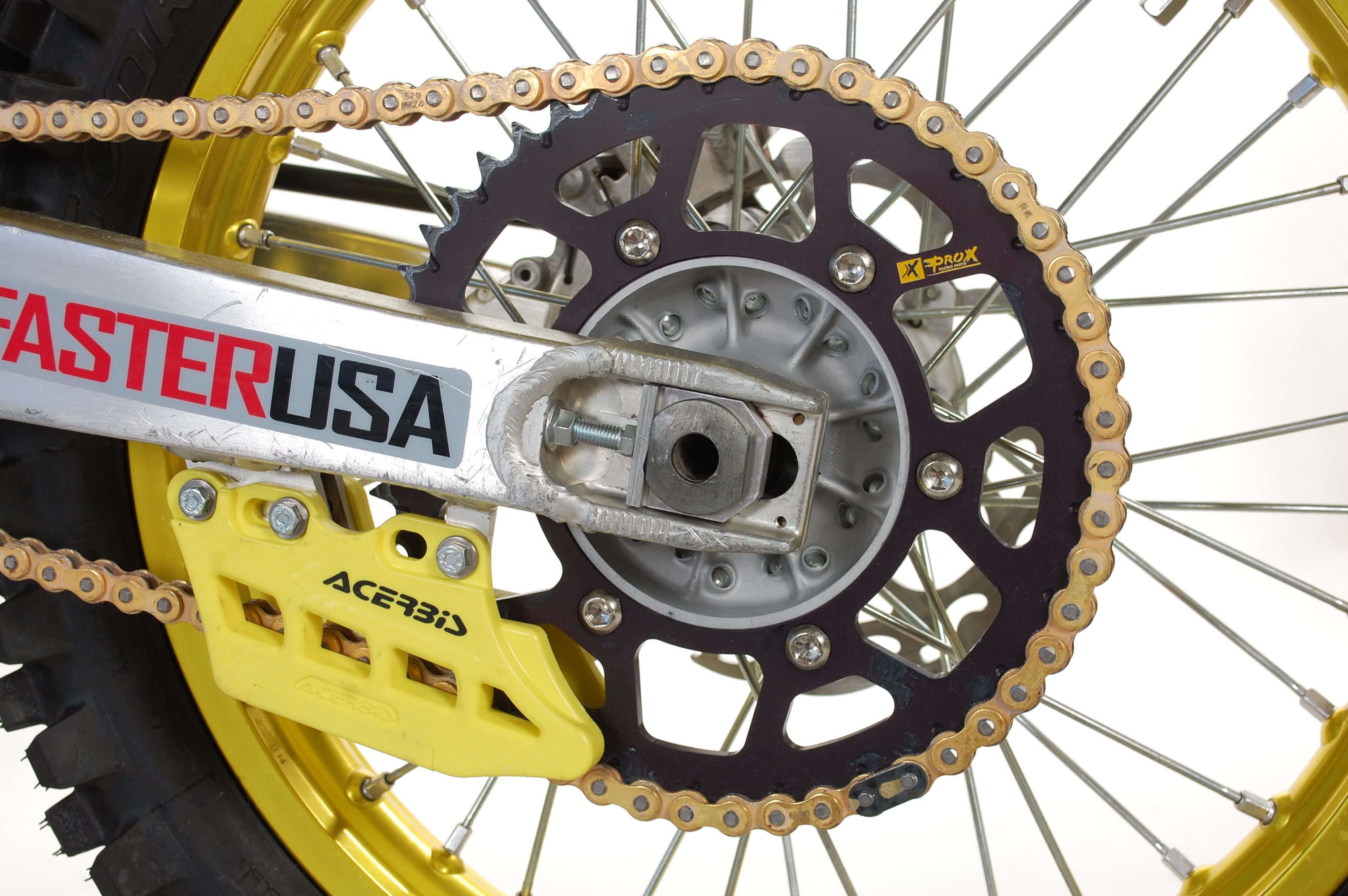 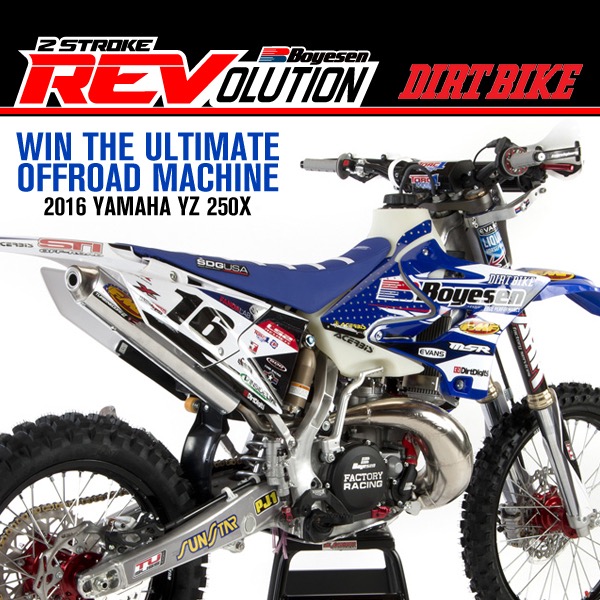 HAVE YOU JOINED THE TWO STROKE REVOLUTION ? If not what are you waiting for? Enter to win this 2016 YZ250X all decked out with and ready for offroad action. No purchase necessary  just sign up now ! Go to https://www.boyesen.com/2-stroke-revolution-signup.php to sign up. 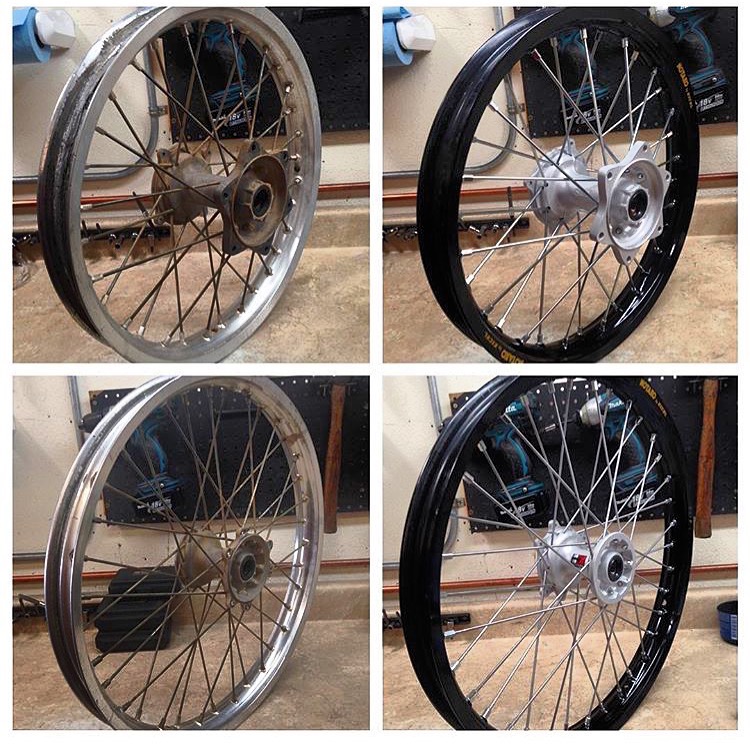 FasterUSA has a wheel service that will blow your mind! Above is before and after pictures of our “Bling On A Budget” build wheels that went through the service. For around $300 Collin and the crew will transform that old hammered set wheels into something that you can be proud of. Get more details at www.fasterusa.com or give them a call at (951)600-7048 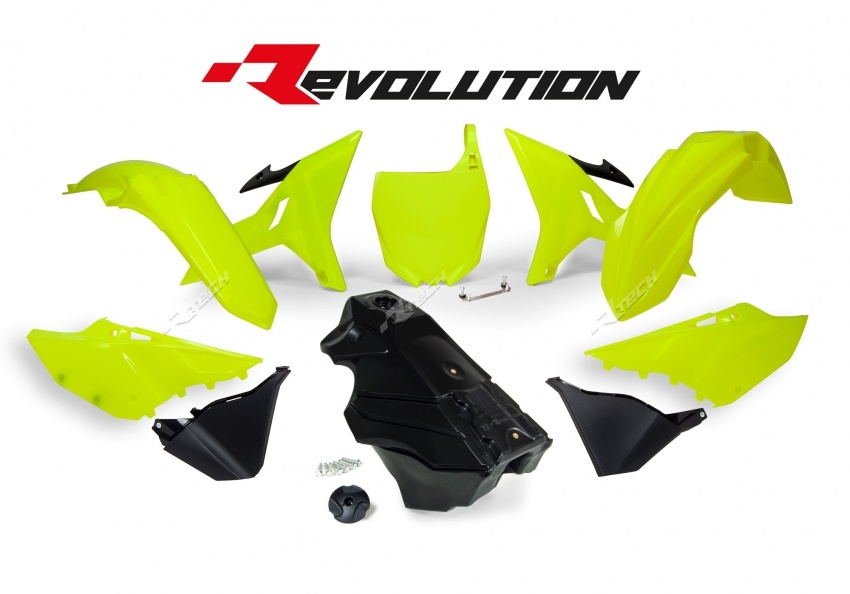 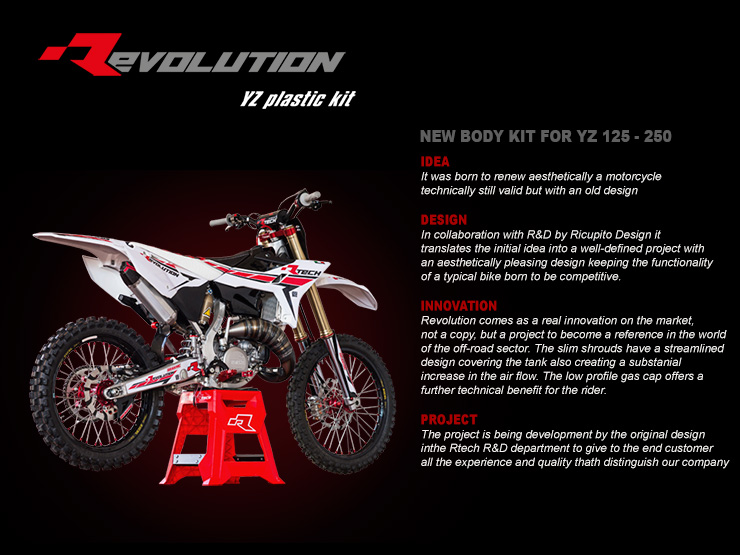 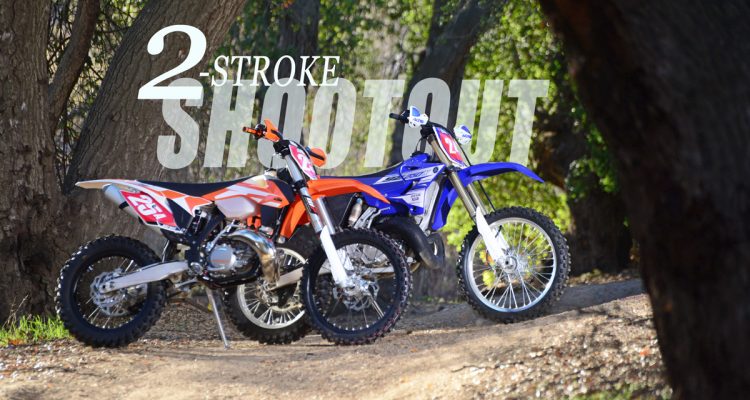 Yamaha has some nerve. Do you know how long it has been since a KTM didn’t rule this class? We’re not even sure. You would have to go through about 30 years of back issues to find a 250cc two-stroke shootout that didn’t list the KTM on top. From the late ’80s forward, it didn’t happen—even in those years when there were five or six contenders. More recently, the class has been too thin to justify a bona fide, multi-bike comparison, making it even easier for KTM.
Yet, here we are in 2016 with a surprise challenger. The Yamaha YZ250X is the product of a very ambitious product-planning staff at Yamaha, designed with the clear goal of taking on the KTM 250XC. It was back in 1997 that a Japanese manufacturer last offered an off-road two-stroke. That manufacturer, as a side note, was Yamaha, and the bike was the WR250, a bike based closely on the YZ250 MX bike of the day. The new Yamaha is built on that same idea. Can it make history? 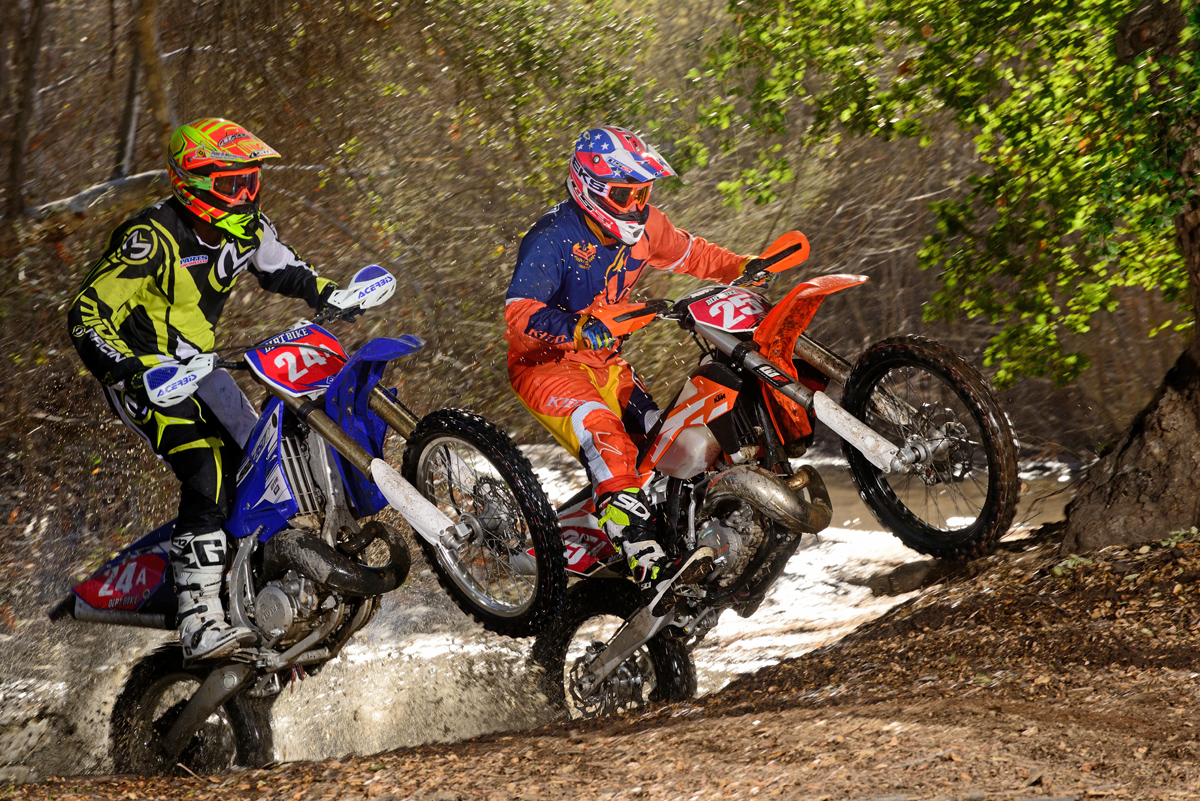 THE CHAMPION
Every time we test a KTM, we have to first explain which KTM we’re talking about. There are a lot of them. The 250XC is the more aggressive off-road 250 in the lineup. It’s more of a race bike than the 250XC-W, has stiffer suspension (with linkage), closer gear ratios in the six-speed gearbox and no spark arrestor. The motor is similar to that of the 250SX motocrosser but with an electric starter. The 250XC is the product of long, slow evolution. KTM isn’t the kind of company to design a motor and then walk away for a few years. The 250XC has been a work in progress since it first appeared in its basic shape with a power-valve, case-reed motor in 1990. Since then, every part in the motor has probably been changed four times, but there was no single year when it happened all at once. The electric starter that came in 2008 was one of the biggest changes in that whole history. Two years ago the motor got a DDS diaphragm-spring clutch to go with the hydraulic actuation that it has had for almost 20 years.
All of KTM’s XC models are very related to the motocross models. The XC has the same chassis as the 250SX, as well as the same WP suspension components. Only the valving is different. But, KTM gave the XC a bigger (2.6-gallon) fuel tank, as well as an 18-inch rear wheel, handguards and a kickstand. For 2016 the bike got a rubber-mounted handlebar, but it is one of the least-changed models in the KTM lineup. It sells for $8699. 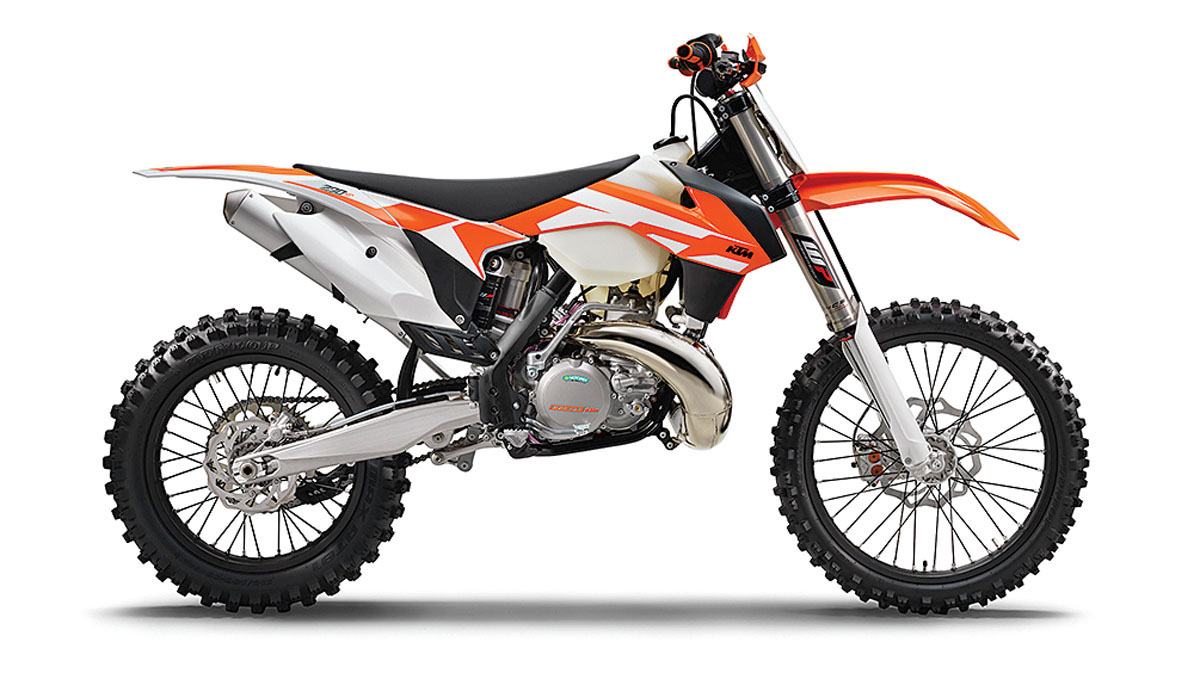 THE CONTENDER
It’s obvious that the Yamaha YZ250X is derived from the YZ250 motocross bike, which is the last of a once-thriving group of Japanese 250cc two-strokes. For years now the YZ250 MX bike has had a big following in the off-road world; this is a case of Yamaha simply acknowledging that fact. This is also a case where resources weren’t unlimited. There was no possibility of electric start, direct injection or anything like that. The Yamaha product-planning and testing departments had to work with what they had.
Luckily, what they had was already well-suited to the task. Job one was making a gearbox that was better for off-road. First and second gear are the same as on the MX bike. Third is lower, while fourth and fifth are taller. The top end was revised too. The cylinder head volume was increased, reducing the compression ratio from 8.9:1 to 7.9:1. The exhaust port was raised and the power valve reconfigured to match. The ignition and power-valve timing were changed as well to give the power delivery a different personality. Interestingly enough, the exhaust-pipe dimensions weren’t changed, even though the pipe was redesigned. The sole purpose was to tuck it in so it would be less prone to damage. Yamaha uses lighter clutch springs in the X than in the motocross model.
The chassis changes are similar to what riders have been doing to their YZs for years. The suspension was re-valved, but otherwise has the same components as the current motocross bikes. The fork remains a coil-spring KYB SSS unit. The rear wheel is an 18-incher, and the bike has a kickstand. Yamaha did not give the bike a larger fuel tank but did subdivide the existing 2.1-gallon tank into main and reserve segments by using a new petcock. It also lacks handguards, but it comes in at $7390. 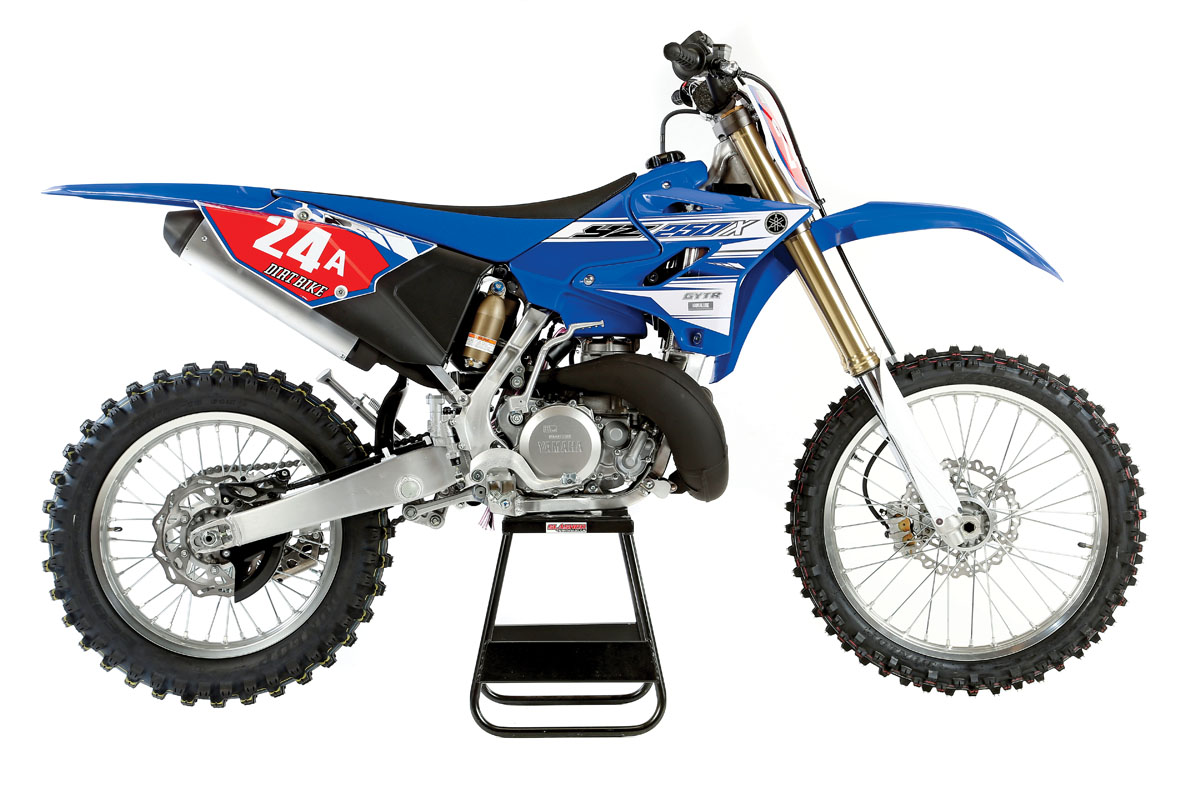 TRAIL TIME
This is the kind of test that we live for: 250cc two-stroke off-road bikes. It doesn’t get any better. These bikes are the best in the world for going fast on tight, twisty trails. The one virtue that makes them so much better than four-strokes is that they’re unstoppable. When the trail is bad, these bikes are at their best. They will both drop down to crazy-low rpm without stalling. They both have excellent throttle response, and they both love the trail. Four-strokes have gotten better at this, but they haven’t reached the same level—not yet.
Between the two of them, the KTM has the most aggressive motor. It’s powerful, with a sharp hit arriving low in the powerband. Then it ramps up quickly and makes an impressive amount of power. This motor has been the horsepower champion in the 250cc two-stroke world for a long time now, and nothing has changed.
Yamaha did an amazing job of transforming the YZ250 motocrosser into an off-road bike with just those aforementioned changes. The power delivery is much smoother than that of the motocross bike. It has a sort of trials-bike quality down low, and the torque is excellent. As it moves higher into the meat of the power, the transition is progressive. It has a much milder, sweeter power delivery than the KTM, making it easier to ride in low-speed terrain. The Yamaha also runs cleaner down low. It doesn’t ping or stutter. The KTM, on the other hand, has a big lean spot. It detonates when you put it under a big load and has a lean surge.
When the trail turns uphill and there’s a requirement for more power, that’s when the KTM has a deeper bag of tricks. It’s hard to argue with power. You can ride from the trail directly to the start of a motocross track and have a reasonable expectation of pulling a holeshot with the 250XC. The Yamaha doesn’t have as deep of a power reserve. You never notice this on the trail, but in deep sand it runs a little flat on top—not only compared with the KTM, but even with a YZ250 MX bike. That makes perfect sense; Yamaha’s engineers didn’t get that magnificent low-rpm power delivery without trading away something. 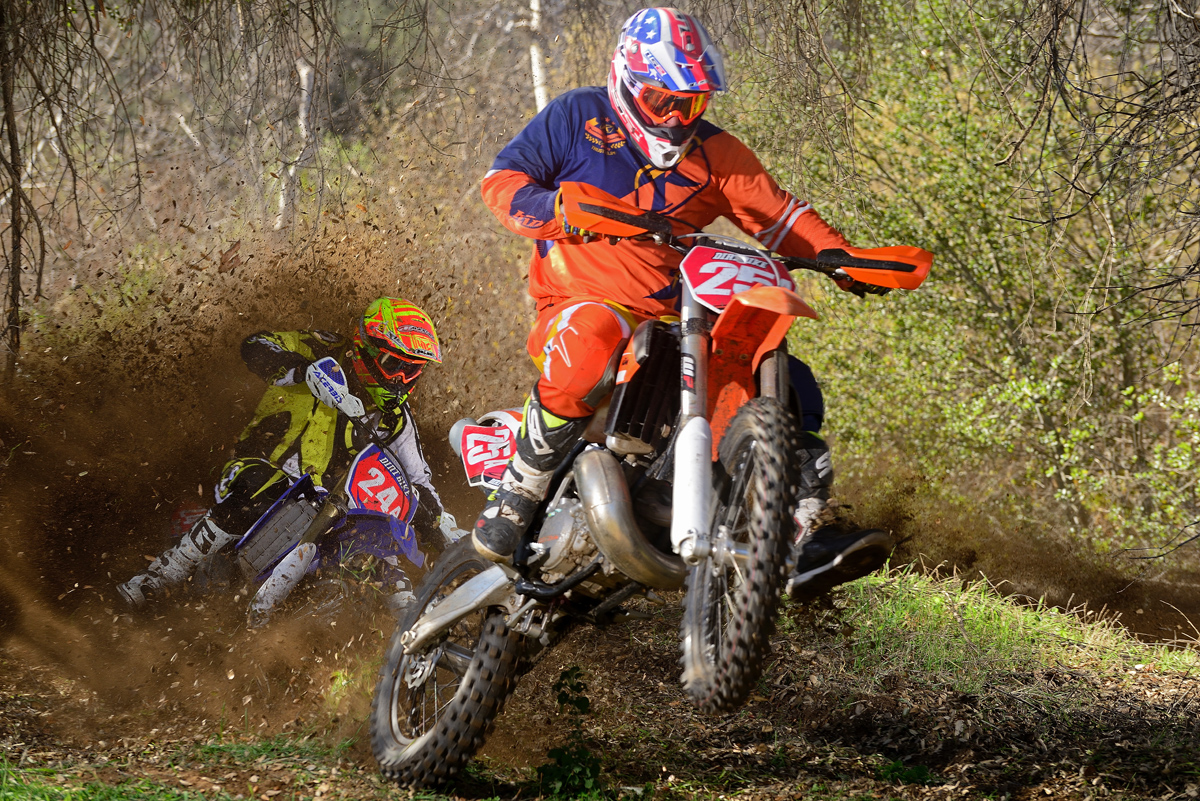 THE MUSCLE FACTOR
Most two-stroke lovers list weight as one of the biggest reasons to shy away from four-strokes. We understand what they’re talking about, but it really isn’t about weight as much as agility or perceived weight. Today’s 250 four-strokes are no heavier than two-strokes, but they feel heavier because they have so much rotating mass. These two bikes illustrate the point. The YZ250X tested here weighs 222 pounds without fuel, which is the exact same weight as the YZ250F four-stroke MX bike. What’s more surprising is the KTM’s weight. The 250XC in this test weighs 229 pounds, whereas the brand-new KTM 250SX-F Factory Edition motocross bike is 218 pounds. Yet, both bikes feel lighter than their four-stroke counterparts.
So, file those figures away and don’t look at them again. They don’t change the fact that these two-strokes are very light-feeling and much easier to toss around than any four-stroke this side of a KLX110. That’s especially true of the Yamaha. It’s a very compact bike, and it makes you feel like you’re riding a feather on wheels. It gives you incredible confidence. The KTM is a bigger, wider bike and seems to carry its weight a little higher. It’s still very light and agile, but next to the Yamaha, anything would seem like a heavyweight.
We can give part of the credit to Yamaha’s suspension, especially the fork. The KYB SSS front end is nothing short of outstanding. It’s soft but doesn’t dive or have any of the traditional drawbacks of cushy off-road suspension. The rear end, on the other hand, is a little springy, but nothing that you can’t adjust away.
KTM uses the 4CS fork on the XC with cross-country valving. This is the best application for this particular fork. In fact, most motocross riders say they prefer the XC settings even for MX. In this case, the XC fork is in its element for fast trail rides with rolling whoops—you might even call it motocross on the trail. In first-gear trails with rocks and stumps, on the other hand, it seems a little stiff. The bike is well-balanced, with both ends equally aggressive. Overall, riders will find the Yamaha’s suspension more agreeable in a wider variety of terrain.
MEGA VOLTS
We love the KTM’s electric starter. That doesn’t make us wimpy, just honest. Purists always like to point out that the Yamaha is easy to start, but that doesn’t mean anything if you’re on a hill using your right leg to hold the bike up. On any given trail ride you’ll likely come across a situation where you simply can’t get a foot on the kick-start lever. The KTM’s handguards and 1/2 gallon of extra fuel also come in handy. We were surprised that the hydraulic clutch wasn’t a bigger advantage. The Yamaha’s old-fashioned cable clutch has an easier pull and a better feel. The Yamaha also runs much cooler and won’t boil over unless you really dare it to.
Where does that leave us? It’s a tough decision, but when it comes to the ride, we found that the YZ250X was more pleasant, more effective and more fun. Yamaha’s engineering and testing staff pulled off an amazing result, accomplishing so much with so little. The YZ is the product of very careful use of existing resources, but it is a good 30 years overdue.