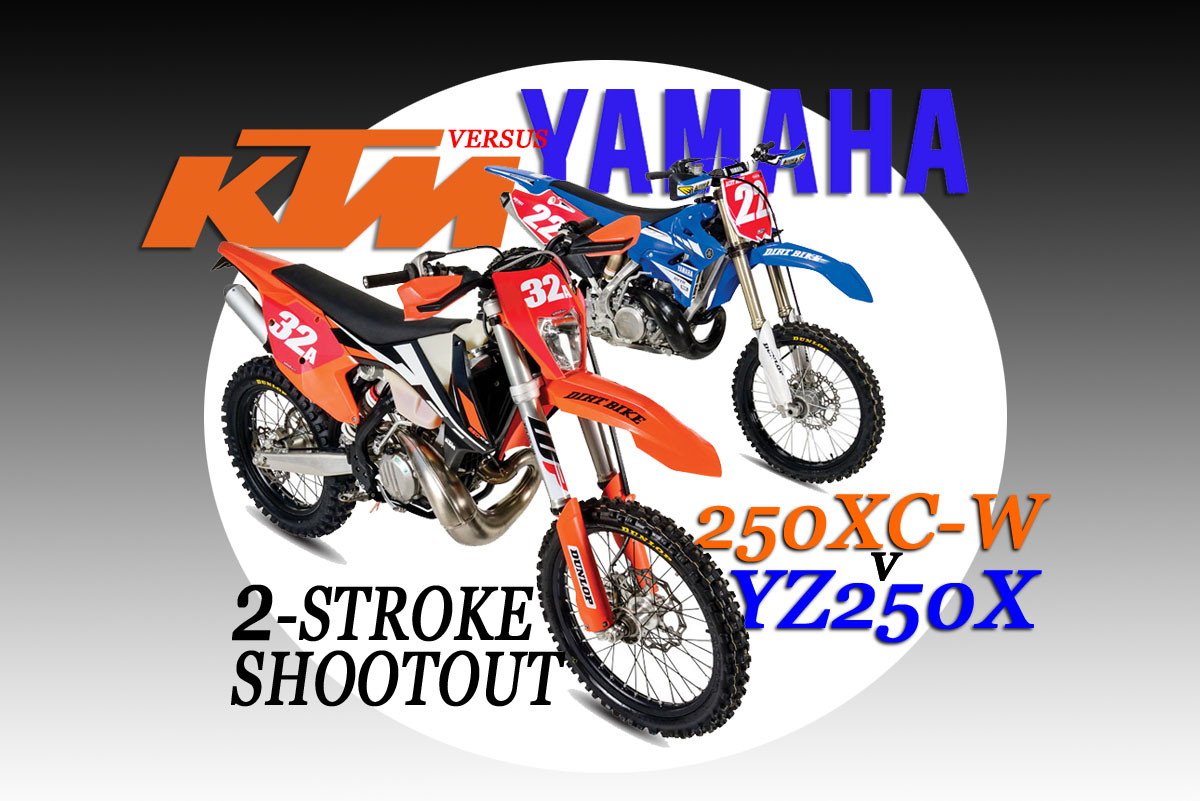 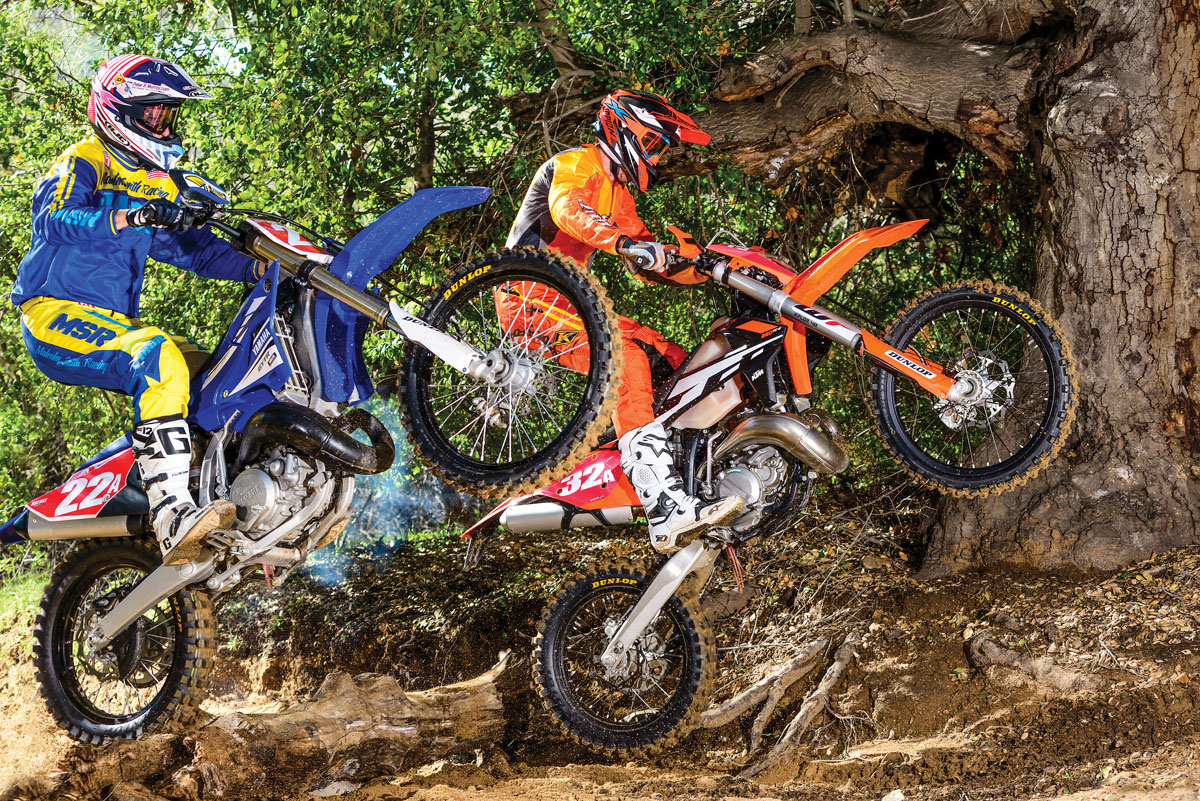 Today, there are more new two-strokes available than there have been in a decade. We’ve boiled down the contest to the two bikes that we think present the most interesting contest. The 2017 Yamaha YZ250X and the 2017 KTM 250XC-W represent two completely different schools of thought, yet they have targeted the exact same rider. Both are made for hard-core off-road purists who ride hard and fast, regardless of whether or not they’re entered in an official race.

YAMAHA YZ250X
When the YZ250X arrived, it took us all by surprise. We didn’t think any Japanese company would add a new two-stroke model to its lineup without taking another away. Yet, the X appeared and didn’t seem to steal sales away from the YZ two-stroke motocrosser. Much has been said about how important the X is, but by the same token, there aren’t that many new parts involved. Yamaha simply took the existing YZ250 and made a handful of changes. To change the power delivery, Yamaha changed the port timing and power-valve shape, reduced the compression ratio from 8.9:1 to 7.9:1 and altered the ignition curve. The pipe is new, although the changes were designed to tuck it in better and don’t affect the power at all. In the gearbox, the top three gear ratios are taller, while final gearing is lower. There are also changes in the shift mechanism and lighter clutch springs. As for the chassis, the suspension is softer and valved for off-road, there’s a kickstand and an 18-inch rear wheel. It has a reserve position on the petcock, and for 2017 it got a larger front brake rotor. The list of things Yamaha didn’t change is much longer. The one item that stings the most is that it didn’t get electric start. It probably would have been easier to design a whole new motor than retrofit a starter to one that was designed more than 15 years ago. The fuel tank is unchanged and holds 2.1 gallons. With that tank empty, the bike weighs 219 pounds. In 2015, Yamaha updated the appearance of its two-strokes with new bodywork, and that look is passed on to the X.

KTM 250XC-W
There are nine new two-strokes coming out of the KTM factory this year. Picking the one model best suited to compare with the Yamaha isn’t as clear as you might think. Last year we paired the then-new Yamaha with the 2016 KTM 250XC in a strictly off-road setting. The Yamaha came out on top. It had a much better power delivery for the trail, cleaner jetting and better suspension for anywhere.
For this comparison we chose the more trail-oriented KTM 250XC-W, which matches the Yamaha’s intended mission more closely. The KTM’s new motor features a counterbalancer shaft, something more commonly seen on four-strokes. The electric starter has been relocated under the motor, and a Mikuni TMX carburetor replaces the Keihin that KTMs have used for 20 years. The XC-W has a wider spread of gear ratios in its six-speed transmission than the more race-oriented XC version, but the most obvious difference between the two models is in the suspension department. The XC-W has a new version of PDS no-link rear suspension and an Xplor 48 coil-spring fork in front, whereas the XC has linkage rear suspension and an air fork. The new motor was designed with weight reduction in mind. It weighs 219 pounds without fuel.
KTM equips its W line of bikes very thoroughly for off-road riding. It has a headlight, an odometer, handguards, a 2.25-gallon fuel tank and ODI lock-on grips. Another big bonus that all KTMs have is a hydraulic clutch. Yamaha has none of those, but it is $1400 less expensive—$7499 versus $8899.

TRAIL SHOWDOWN
Let’s get the electric-starter business out of the way. Yes, the KTM has a clear advantage going in. It’s better when you start off in the morning, and it’s better when you get stuck in places where you can’t get to the starter. We know, and you gotta figure that into the $1400 price difference. Moving on, the two bikes are very closely matched.
Both bikes share one trait that makes them incredible on the trail—they won’t stop. After all this time and all this technological advancement, four-strokes still can’t match the way a good-running two-stroke works at very, very slow speeds. You can take either of these two bikes down to a crawl without stalling, then open the throttle and have them spring to life. More relevantly, you can mess up in every way possible climbing a difficult rock pile; you can have your feet dangling, your weight off balance and your technique missing in action, but as long as you keep the throttle slightly open, either bike will keep chugging on and on. You would have to have a trials bike to do any better.
Of the two, the KTM is better equipped for those impossible rock piles for three reasons: First, it has a lower first gear. The KTM’s six-speed transmission gives it a low granny gear. You don’t need it often, but it sure comes in handy when you do. The KTM also has a much smoother motor. The counterbalancer not only eliminates vibration, but adds a little flywheel effect and makes the motor respond more controllably. Funny, we never noticed any vibration in the Yamaha motor before, and we’ve been riding it for the better part of two decades. Now it seems like a shaky vintage bike by comparison. And then the KTM’s hydraulic clutch adds another element of security. Both bikes have excellent clutches with light pulls, but hydraulic actuation deals with heat and rider abuse better.
Yamaha still has a jetting advantage. The YZ250X carburetes perfectly. Most of our testing was done near sea level with mild temperatures, and those are the conditions that Yamaha must have targeted. The 250XC-W actually has the best jetting of all the new KTM-powered two-strokes, but it’s not perfect. There’s a lean surge when you close the throttle, and it occasionally stammers when you get on the gas. These issues are so minor that they fall into the normal range of two-stroke mannerisms and might be different on any given day. Fuel injection has addressed temperature and altitude variations effectively in the four-stroke era, and two-stroke guys know it’s just a cost of doing business.
When you climb out of the rpm basement and have a sudden need for speed, the KTM pulls much harder than the Yamaha. The engine tuning tricks that Yamaha performed to make the YZ250X work so well at slow speed extract a price in roll-on acceleration. If you’re used to the YZ250 motocross model, you might think you have your foot dragging on the brake slightly. Then, once the bike climbs higher in the revs, the bike catches up and the power output is decent. In any comparison of power, though, the KTM comes out on top. It responds instantly and pulls hard through the midrange. When both bikes are singing, the KTM just makes more power.

THE FEATHERWEIGHTS
Riding a truly lightweight bike is a joy that only two-stroke guys really understand. You might look at the numbers and declare that a 250F weighs no more, but that’s not what matters. There are gyroscopic forces at work in a thumper motor that make it more reluctant to change direction. Beyond that, a four-stroke just doesn’t like to be jammed and stuffed. The YZ250X and 250XC-W, on the other hand, live for it. Quick turns, sudden movements and abrupt transitions are the core elements of off-road riding, and these bikes do it better than anything else—and that includes most other two-strokes.
KTM came a long way with suspension this year. The new Xplor 48 fork is a big improvement over the previous WP fork. This is a very plush motorcycle. Rock riding is the bike’s specialty. It soaks up little stuff extremely well and allows you to maintain control when the terrain is trying to throw you around. At higher speeds and in whoops, however, the KTM is soft. The fork dives and the rear end bottoms when you hit big obstacles. The Yamaha is much better suited for this kind of riding. The fork is simply outstanding. It does almost as well as the KTM in rocks, but can also handle speed. The front end stays higher in the stroke and it never bottoms harshly. The same goes for the rear end. If there’s any one thing that has made the YZ250 two-stroke survive for so long, it’s the suspension. It’s always had an advantage there, both for MX and off-road. 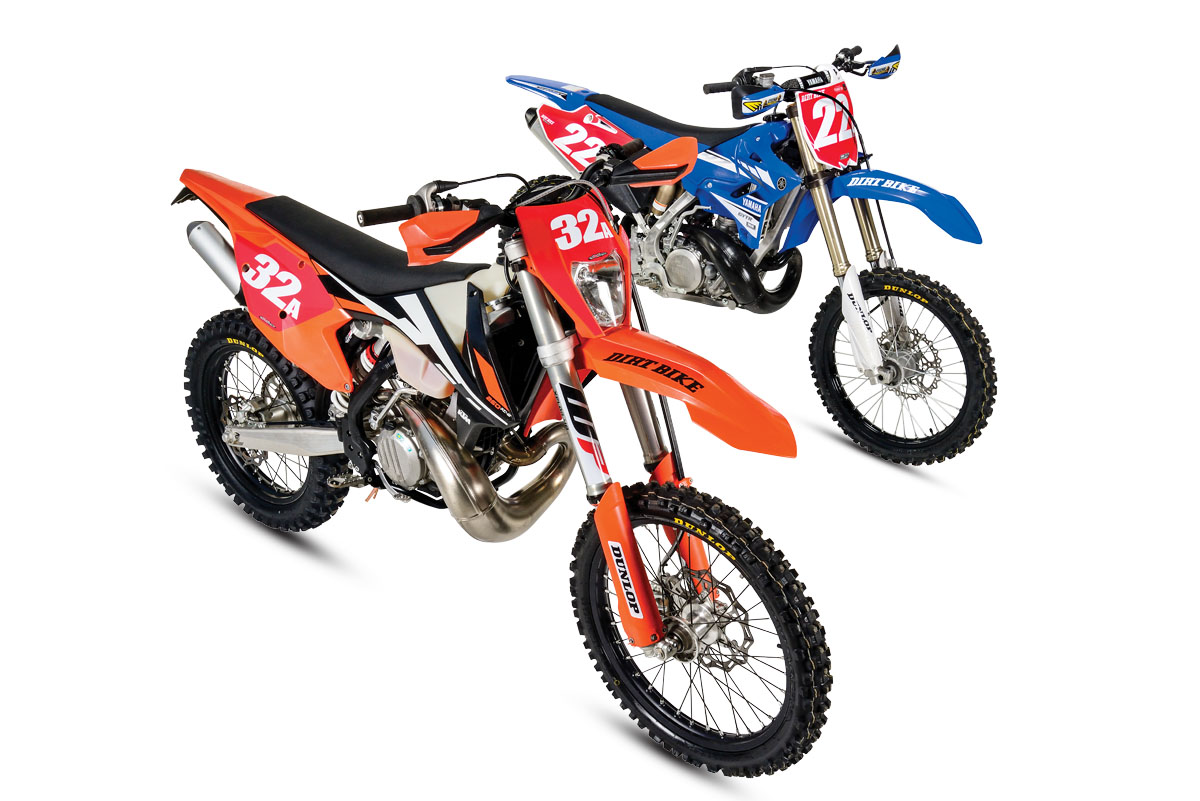 DETAILS AND RETAILS
In the end, the price difference between the Yamaha and the KTM is justified. As we pointed out earlier, the 250XC-W gives you a lot more stuff—electric start, a six-speed gearbox, a bigger tank, a hydraulic clutch and handguards. When you add in more power and a smoother motor, it’s easy to write a bigger check. The KTM wins this contest and will probably go down as one of the very best bikes of the year. The Yamaha is still one of our favorite off-road bikes and proof that the age of the two-stroke isn’t over. It’s just beginning.

BLAST FROM THE PAST: STEVE SIMONS