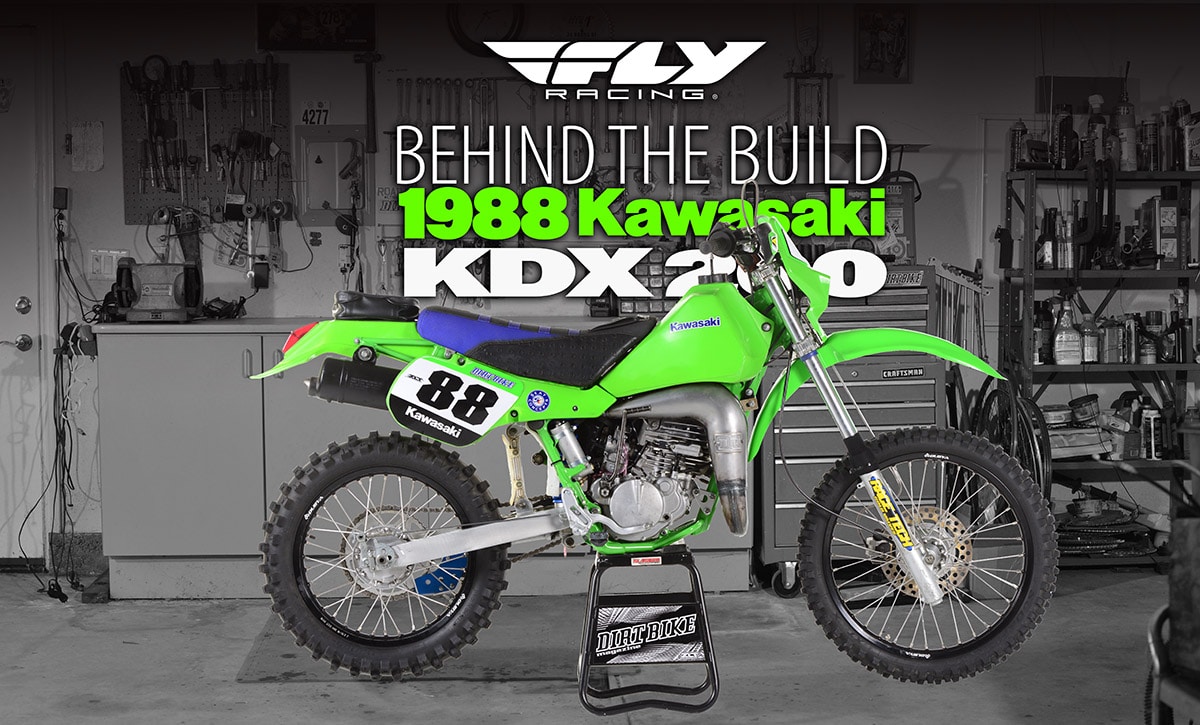 The inspiration for this project can be traced back to the 2016 ISDE. There were a couple of guys on 35-year-old Jawas who attempted to ride the Six Days for the host country of Slovakia. They didn’t even finish, but it seeded a “what-if” discussion. What if there was a class for older bikes at the ISDE? What if there were some classic riders on classic bikes mixed in with the young riders on new bikes? How fast would they go? How far would they get?
For me, the thought was more than I could take. I rode the ISDE in the ’80s, the ’90s and once in 2000, and would love to add one more decade to the list. The concept was barely out of the maybe stage when I decided I should start quietly preparing for it—just in case. So began nine months of the Kawasaki KDX200 immersion.

There was never a bike like the Kawasaki KDX200. You can point to other 200s, but nothing was so sweet, so versatile or such an invisible assassin. It had a reputation as a family kind of bike for wives and kids to ride around the campground, but it was developed by a hard-core group of off-road purists like Jack Penton, Kevin Lavoie and Jeff Fredette who secretly injected the bike with hard-core enduro capabilities. Then, of course, there was Fredette’s incredible streak. From 1983 to 2006 he started and finished 22 ISDE events for Team USA on the KDX. That would have been a record on its own, but Jeff actually completed 33 of them in his career, which started before he joined Kawasaki and ended after the KDX was discontinued.

The reason, I figured, that the KDX was a perfect bike for my purposes was because the proposed rules for the class called for a bike that was 30 years old. The KDX went through a number of redesigns in its run, but the one from 1986 to 1988 was one I particularly liked. It was the only air-cooled bike that I know of that had a power valve. It also had Kawasaki’s version of Nikasil cylinder coating. It had a disc front brake and what I consider fairly modern ergonomics. If you ride a bike that’s older, you have odd seating positions and some truly archaic designs. KTMs and Huskys were more competitive at the high-end of off-road racing in 1986, but getting one running 30 years later is a big job. Rebuilding a KDX, I thought, would be cake.
Any bike from the late ’80s and early ’90s is from the forgotten era of dirt bikes. Earlier bikes are relentlessly hunted by collectors and AHRHA racers. Bikes that are 20 to 30 years old, on the other hand, tend to be worn out, neglected and cheap. People are reluctant to invest in them because they think it’s easy to spend more than a bike’s retail value. But that’s a fallacy. In truth, you can have a great motorcycle from this era running for a fraction of the cost of a new bike. It might not be cost-effective if you think you’re going to build it, then sell it and make money, but it makes perfect sense if you plan on riding the bike. That was my plan.

Within a few days I found the bike I wanted on Craigslist. It was a KDX of the right era, it ran and it was only $425. I later found out that it was a 1988 model, making it a year too new, but it was almost identical to the ’86 version, and I would cross the bridge of eligibility later. The first problem was the guy I bought it from. He was a chronic liar. Virtually everything he told me about the bike’s history was made up. He said the reason it ran poorly was because he had mixed the gas and oil about 50/50. That should have been a red light; no one puts a gallon of oil in a gas can. It turned out that there were about five reasons it ran poorly. The most entertaining one was that he replaced the missing airbox cover with a flat numberplate and no air was getting into the motor. There were various problems with the carb and power valve too. I thought all that stuff would be easy to fix, because KDX200 parts would be easy to find. Kawasaki sold a billion of them. It turned out tougher than I thought. Bikes this old don’t have easily found parts, no matter how popular they were back in the day. This particular KDX was only in production for three years, and Kawasaki had discontinued most OE parts. The answer, as it turned out, was eBay. Eventually, everything shows up there. The missing airbox cover took the longest to find, but eventually it showed up. You have to pay what you have to pay—in this case, $45.

You have to be a detective to find some parts. The kickstarter gear was worn out and discontinued. I found some used replacements that were equally worn out. It turns out that the part from a later (1991) KDX will fit as long as you replace the adjoining gear. Then there’s the matter of this piston. At first I used an aftermarket piston. There are several available, but the problem is that they sell the same part for the later liquid-cooled KDX. Kawasaki had a different piston for water-cooled and air-cooled bikes, saying back then that they required different shapes and that the air-cooled pistons were more oval-shaped. Was that true or was it sales hype from the early days of liquid-cooling? Everyone who knew is gone. Eventually, I found the correct OE Kawasaki part, unused, on eBay. Kawasaki, of course, had long since discontinued the part.
Most of the restoration was plain old-fashioned labor. The original plastic is impossible to find, so restoring it was a matter of using sand paper and hours of work. In the case of the fuel tank, it worked out great. If you start with 600-grit paper and sand out all the big scratches, then use finer and finer grades all the way to 2000, it actually shines without any surface treatment or even buffing. The number plates and finders are a different story. They’re a different kind of plastic that never quite shines, no matter how hard you polish. A coating of PC1 Plastic Renew is a necessary last step. For the front fender, I got a current Cycra part, and for the headlight, I used a 1991 Kawasaki OE part, which is still available. I couldn’t find a front disc-brake rotor, but I was able to resurface the original one with a belt sander. With new Braking pads and a new hose, it worked great. 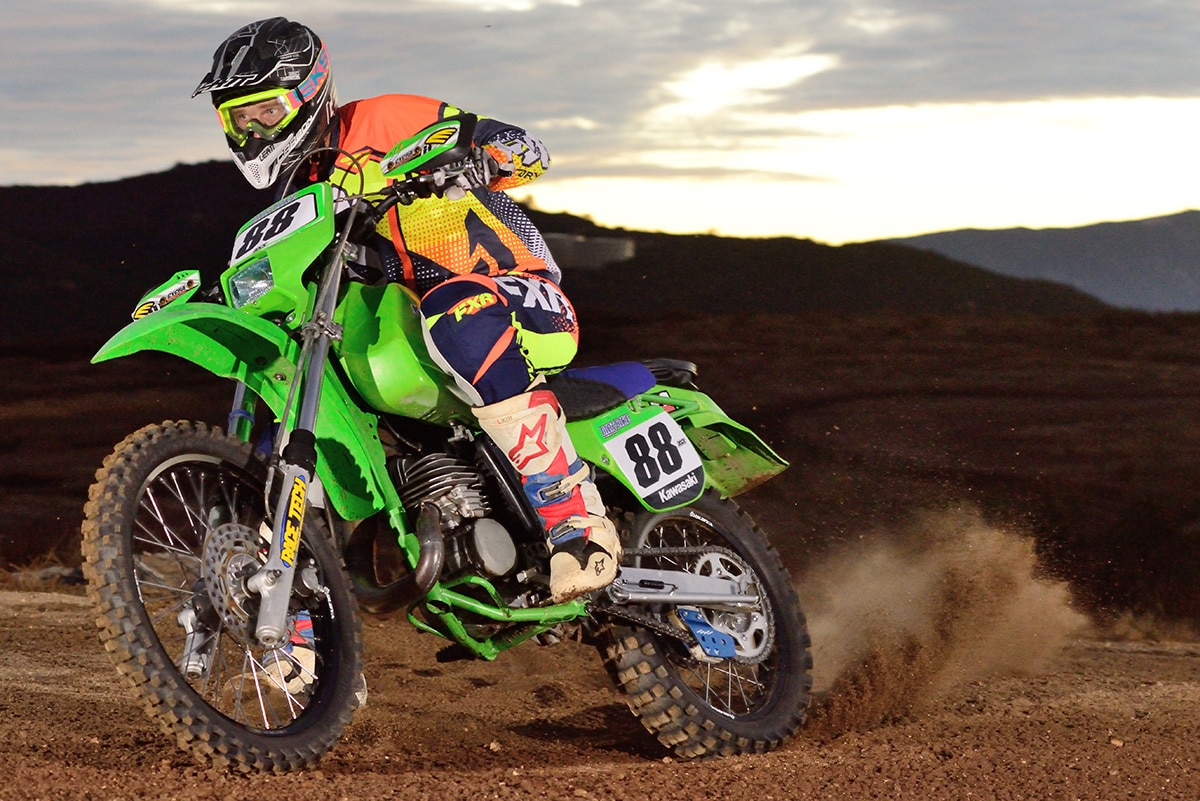 I rebuilt the motor, Race Tech rebuilt the suspension, and most of the bearings, seals, gaskets and clutch parts were all available through Pro-X. The first time I tried to ride the bike was at the Adelanto GP. There’s a class in all the Big Six races for old bikes.
It seized on the first lap. I was devastated! Even now, I still don’t know why; it had the stock jetting and the stock pipe at the time. Whatever; the cylinder was destroyed, and I had to start all over. Bud Matto and the guys at Performance Machine re-plated the barrel while I took everything apart again. They say that all old bikes have air leaks; it’s just a matter of how bad. I sealed everything and went to DG for a whole new carburetor. I should have done that from the start. The 35mm Keihin PWK was a brand-new carb back in the late ’80s, and it was amazing. When they sit for 30 years, however, they’re not so good. There were certain problems—the carb I got from DG had the choke and idle adjuster on the left, where they were almost inaccessible with the KDX’s airbox in the way. So it goes. DG also supplied the pipe. I modified it by adding 10mm to the head pipe for more low-end. The stock muffler was used because it was reasonably quiet.
On the second rebuild, the bike also got a real gift: new wheels. Actually, they were better than new. Dubya rebuilt them with new stainless spokes and the company’s own rims, which were much higher quality than the originals. I even got black rims—not period authentic, but they look awesome and I don’t apologize. San Diego Powder Coating made the frame look perfect (with minimal prep work on my end). The crowning touch was new foam and seat cover from Seat Concepts and graphics from ZLT.

Everything in the restoration process is slow. While the various build and rebuild jobs were going on, the whole ISDE concept was falling apart. The promoter of the Spanish ISDE was going ahead with a vintage class, but it would be an invitational, and the AMA didn’t want to support it. The word eventually trickled down that there would be no vintage class in the U.S. qualifiers and no room for vintage bikes in the official Team USA container bound for Europe. Every few months I called Jeff Fredette to discuss the whole plan. He loved the fact that I was showering his favorite bike with so much attention, but was skeptical about getting it into the race. I eventually stopped pursuing the idea. afterward,  Fred Hoess actually got on board with a 1986 Husky WR250. He was the only American in the vintage class, and he won quite easily
It doesn’t matter that much. I now have a finished KDX200, and there are a number of races ridght here in the U.S. that it’s eligible for. The bike is a gas to ride. It’s a mixture of modern tech and old-school thinking. It’s torquey and smooth, with reasonable suspension and just as sweet as it was in the old days. To be honest, there are some things that weren’t as I remembered them. Who knew that drum rear brakes were so weak? Did they really ride with footpegs that narrow? I had to install IMS Pro Series pegs; I owed it to my arches.
I’ll use the next year to work out some other issues too. I have no idea why it blows out headlight bulbs so quickly. I wish the odometer worked. And, someday, I hope to find tank stickers that stay on for a full day of riding. 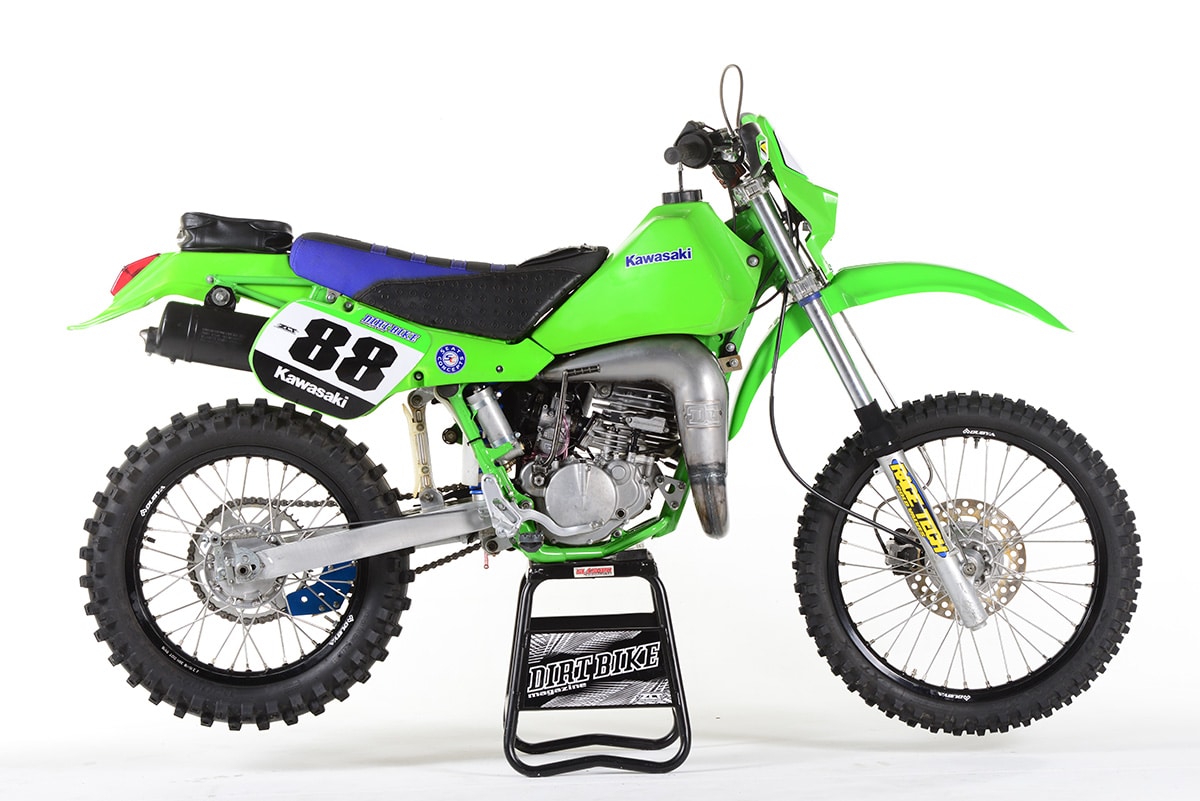