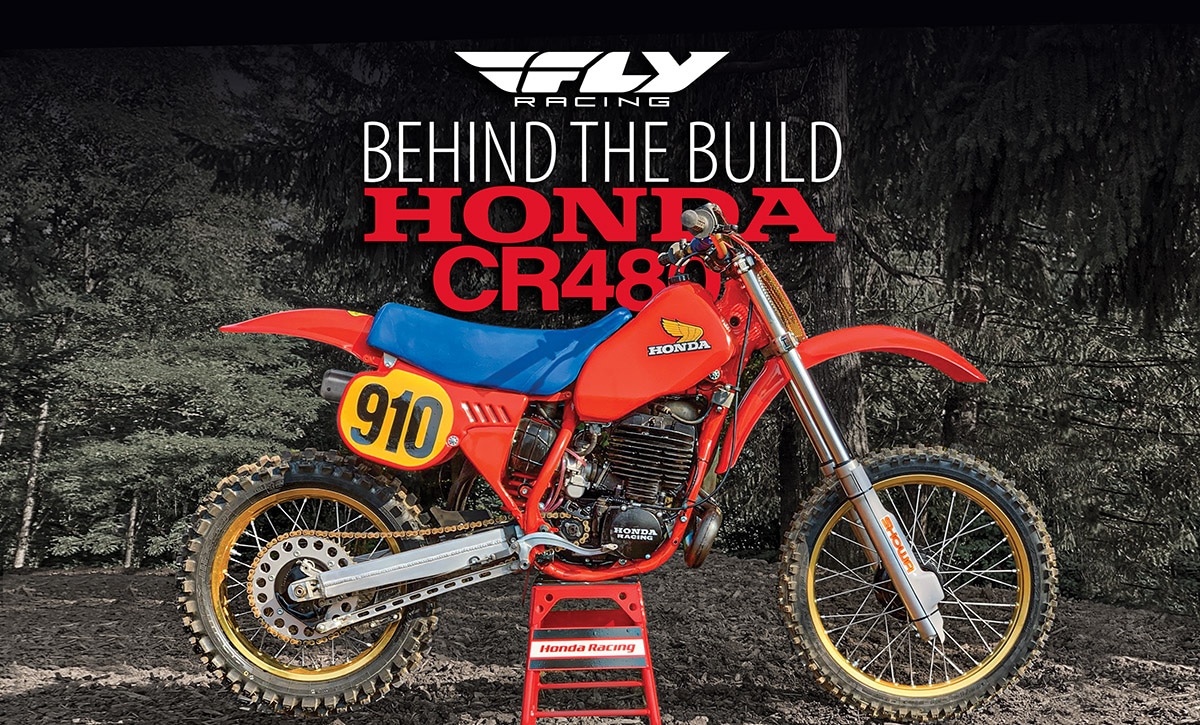 Have you ever wondered what would happen if legendary fabricators of today got together to rebuild iconic machines of yesterday? If so, this 1983 Honda CR480R project is just what you have been waiting for! Dirt Bike magazine teamed up with the crew at BBR Motorsports and current national-level professional rider Carson Brown (son of BBR owner Duane Brown) on this retro two-stroke rebuild.

This build started when Carson Brown showed up at his dad’s house completely out of the blue with a 1983 Honda CR480R in subpar condition but relatively complete. Duane texted a picture of the bike to longtime friend Dave Arnold, saying he was happy that his son Carson was interested in vintage stuff. Duane said his phone rang almost immediately with a very excited Dave Arnold on the other end. You might recognize Dave Arnold’s name as being associated with Honda’s factory-level racing effort for many years. That phone call basically cemented the direction of this build, getting both Carson and Duane fired up to produce an RC Danny “Magoo” Chandler-version CR480R.

As you can imagine, getting any parts for a 1983 Honda of any type is difficult. You can’t just go down to your local dealer and order up parts. Now throw in the fact that the Honda CR480R is probably one of the most sought-after open-class machines in history, and you can imagine how difficult and possibly expensive this portion of the project could become. Lots of man-hours were spent on eBay, OfferUp and vintage marketplace websites just to obtain necessary items.

HAND-FABRICATION
Custom fabrication was the backbone of this build and, specifically, the goal was to make this build as close to Magoo’s factory bike as possible. Luckily, Dirt Bike magazine had lots of pictures available, and Duane had help from actual people involved in building that factory machine almost 40 years ago. The most overlooked hand-fabricated part on this build has to be the monocoque one-piece airbox/subframe. This was 100 percent hand-built out of aluminum and then color-matched to the main frame and plastics with a powder-coated finish.

Everything matched so perfectly that when looking at the bike initially we didn’t even notice all the welds. In 1983, the main frames were made of steel and built to last, but this bike was going to be raced by Duane’s son, and Carson can ride just about any machine into submission, so lots of reinforcing in key stress areas was done for durability purposes. Making something “Carson-proof,” as Duane puts it, is almost impossible. The gas tank is also aluminum and required tons of attention to detail getting the exact shape.

Just like the version used on Magoo’s bike, this unit is thinner and taller than the model that came on production machines. The one detail that screams factory for most people in the know is the gas cap. It’s a smaller version that came stock on the 1979 CR model. Another completely handmade part on this machine, and probably the most commented-on item, is the swingarm. Every little detail just jumps out at you. The “coke-bottle swingarm” looks nothing like what came on the bike stock in 1983 and is a lot stronger—again, thinking about the Carson-proof factor.

The exhaust for the CR480R is tough to find, especially something in good condition. And, because this build was all about that factory look and performance, a stock version off the internet just wouldn’t cut it. The final version seen on this build was fabricated from “a few” systems that were cut up and pieced together. We are sure you can imagine what “a few” means in this context.

FACTORY ENGINE
Eric Gorr was one of the people involved with Honda and Magoo on a factory level back in 1983 and has gone on to build countless race engines since then. Gorr worked his magic on this build, porting the cylinder, reshaping the head and adding a compression release to help with starting of the awkward left-hand kick that this machine utilizes.

Internally, a Phil Denton rod kit was used, and Crank Works did some precision balancing of the crank/rod assembly to reduce the overall vibration. The ignition and clutch covers are also from Phil Denton Engineering. As we mentioned before, the exhaust is custom-built using multiple systems combined to get as close to the factory race spec as possible, and the engine now supplies fuel through a newer-style Keihin carburetor off a Honda CR500 using the stock air boots.

FACTORY HARDWARE
We have seen a lot of restoration projects over the years, but nothing like this 1983 Honda CR450R built by Duane and Carson Brown! They took an almost 40-year-old bike and restored it to not only new condition but made it probably better than what the factory Honda race team produced for its professional riders at the time. The handmade one-off items designed to replicate the factory parts are mind-blowing. Trust us, we stared at this bike on the stand, drooling for a long time, before we could actually start shooting it. The longer you look at the details that make up this build, the more little things you come across that will impress you.

Another surprise with this build is the performance. Most of our restoration projects look good, but once we ride them, reality hits and we are scared out of our minds. Not true with this build. It makes fun, ridable, big-bore two-stroke power that produces smiles and giggles the entire time. Suspension is definitely better than what came stock in 1983, but that was expected, because internals were updated, along with improving the linkage and swingarm externally.

If you really want to be blown away by what this bike can do, check out the video produced by Travis Fant on our YouTube channel of Carson Brown riding it at Mountain View MX Park.

BRANDY RICHARDS AND THE PERFECT SEASON: THE WRAP