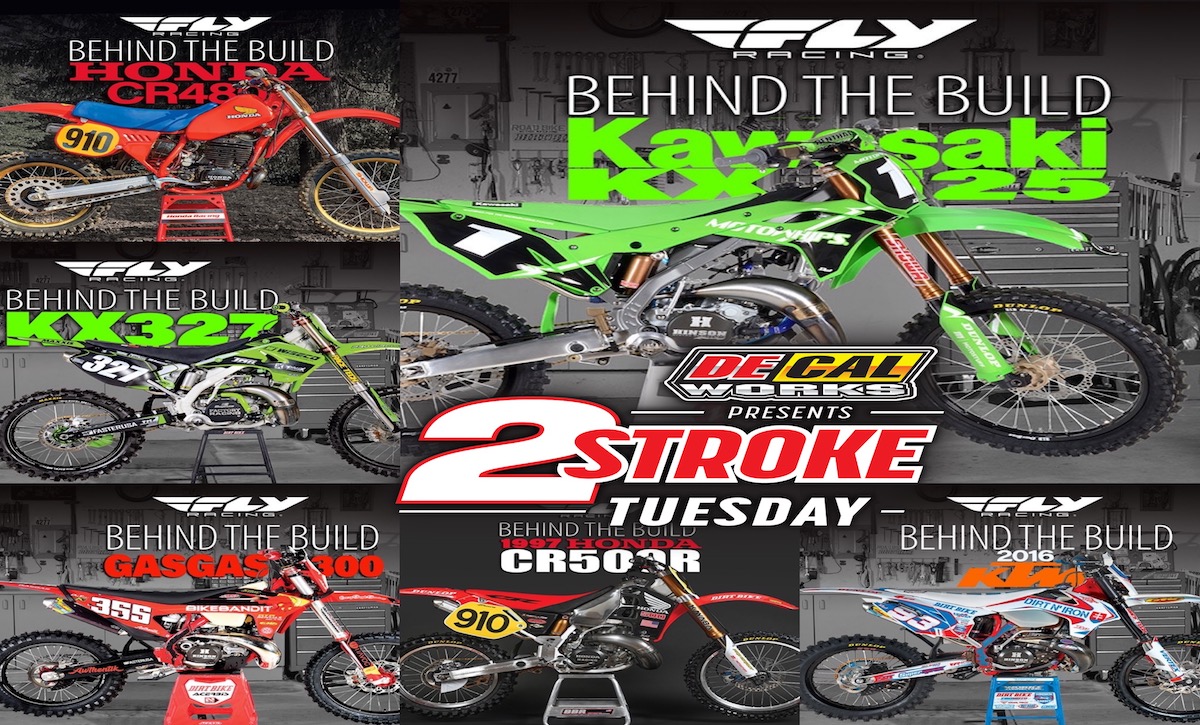 On this week’s Two-Stroke Tuesday we take a look back at 10 projects completed or featured in 2021. Every build for the magazine has a story behind it, some are more colorful than others but they all have a special place in our hearts. Below is a mix of 2-Stroke Behind the build stories brought to you by Fly Racing, click the image below for more information on each build. Scroll down we guarantee there is a build that will get you blood pumping.

Carson Brown loves to ride dirt bikes! It doesn’t matter the year, make or model, he just loves two wheels and an engine. Lucky for us, we like showcasing his talents on said dirt bikes. Lately, Carson and his dad, BBR Motorsports cofounder Duane Brown, have been resurrecting older iconic two-strokes. This 1997 CR500 build started about two years ago when, in Duane’s words, “Carson just showed up to the house with this beater Honda CR500 in the back of his truck one day saying he wanted to rebuild it.” Naturally, Duane was 100 percent on board and the sparks started to fly.

KTM is one of the manufacturers still pushing two-stroke motorcycle technology advancement in the industry today, but unfortunately the largest displacement is 300cc. Johnny Weisman and his crew at the Ride Shop AZdecided to combine brand-new technology from KTM, some very proven old-school two-stroke technology from Kawasaki and some aftermarket bolt-on performance items from industry-leading companies to create what we have named the “Dark Knight KTM 500”.

Extreme enduro has seen a huge explosion all around the world in the past few years, so much so that there is a full series in the USA now dedicated to outdoor extreme events. With this popularity comes not only some very talented riders showcasing their skills, but purpose-built machines that can conquer what Mother Nature has to offer and can also handle the abuse its rider dishes out as well. This TM 300FI two-stroke is headed to paradise for Hawaiian extreme enduro specialist Ryan Gouveia.

You could spend hours gazing at this Every Single Sunday GasGas EC300 that, believe it or not, was not originally built with the goal of being featured in a magazine. The owner/builder of this hard-enduro specialist, Travis Brock of Every Single Sunday, is a popular off-road YouTuber and content producer for BikeBandit.com who set out to build himself the ultimate dirt bike for his favorite type of riding.

We have built a lot of project bikes with Justin Myerson from Motowhips over the years and are always blown away with each bike. This KX125 is Justin’s personal bike and took almost two years to build in between working on customer builds. It features an updated KX250 four-stroke front end with a mounting kit using a newer four-stroke gas tank, subframe and modified airbox, allowing the use of newer plastics and changing the overall look. Motowhips worked with other industry-leading fabricators to come up with a kit that allows newer KX four-stroke plastics to be used on this early 2000s KX two-stroke.

We have all seen a motorcycle that we have dreamed of owning one day. For our buddy Rado, it was the 2016 Six Days edition KTM 300XC-W. This machine was decked out in his home country’s colors because that’s where the ISDE was being held—and who wouldn’t want a patriotic 300cc two-stroke in their garage? These bikes were produced in limited numbers and are usually very expensive to purchase, so we decided to work with Rado to make his dream a reality—but with an unexpected plot twist.

Have you ever wondered what would happen if legendary fabricators of today got together to rebuild iconic machines of yesterday? If so, this 1983 Honda CR480R project is just what you have been waiting for! Dirt Bikemagazine teamed up with the crew at BBR Motorsports and current national-level professional rider Carson Brown (son of BBR owner Duane Brown) on this retro two-stroke rebuild.

Working on “project bikes,” as they’re commonly called, never gets old. Some projects start with new bikes and some are Craigslist finds, but this bike has a unique story behind it. Kevin Bailey from Race Winning Brands takes us through this KX327 rebirth in his own words.