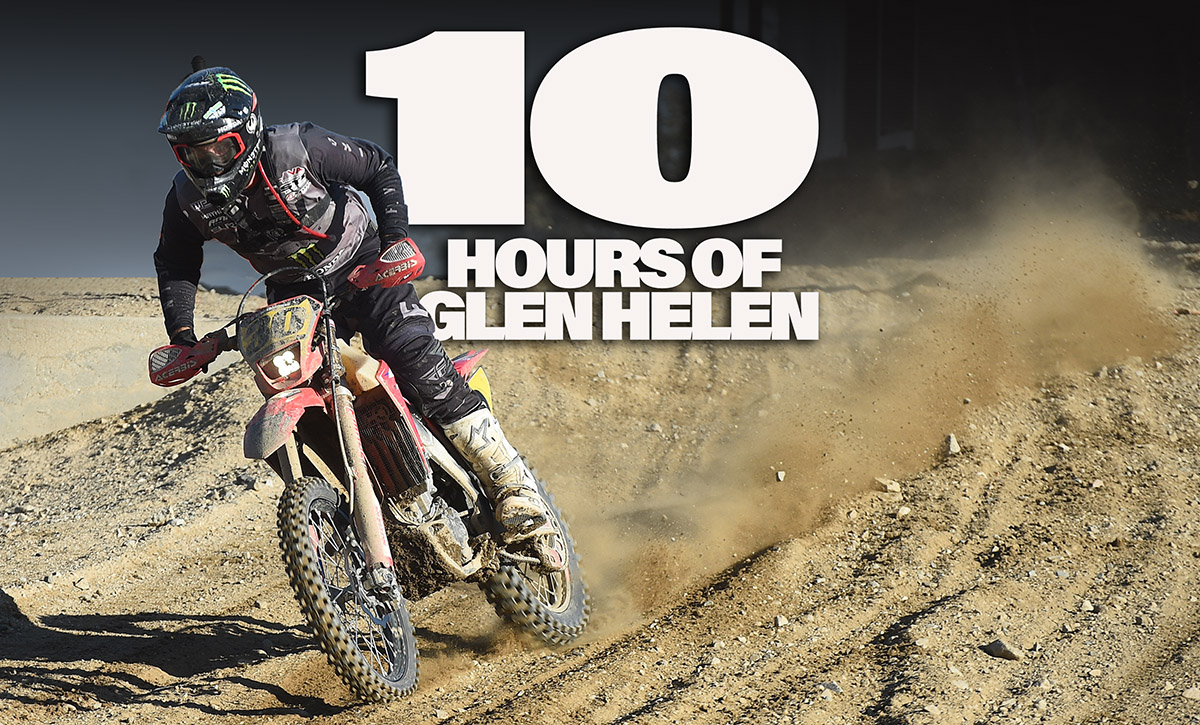 The 3 Bros 10 Hours of Glen Helen took place this weekend despite summer heat and pandemics. This year the event was staged as a night race to avoid the heat–most of it was held after sunset. The riders left the line at 4:00 in the afternoon and the checkered flag dropped at 2:00 a.m. That gave all the members of each team enough time to ride in the daylight, familiarize themselves with the eight-mile course and settle in for the night. The course itself was designed to keep the riders off the remote ridges surrounding Glen Helen Raceway. It combined the National course, the REM track, the Lucas Oil Stadium truck track as well as incorporating a tricky pavement section around the San Manuel Amphitheater. There was no escaping the fact that summer is dust season in Southern California. The Glen Helen staff watered sections of the curse repeatedly during the race, but invariably, there were dry sections.

The course also incorporated the infamous Corkscrew for the first time in years. This is an obstacle that takes the riders through a continuous 630-degree right-hand turn. The escape from the center of the spiral is accomplished by climbing the steps of a steel bridge, which is the hard part. Due to repeated bottlenecks at the stairs, that section was removed early in the race.

None of the challenges proved too much for the SLR Honda team of Trevor Stewart, Justin Morgan and Cole Martinez. Going in, that team was stacked, making them the odds-on favorite. They led from start to finish and was the only team to complete 42 laps. They weren’t unchallenged, though. Nic Garvin, Colton Udall, Derek Ausserbuaser and Ian Young followed them on another Honda throughout the race. It wasn’t until the wee hours of the morning that the SLR team got the comfort of pulling a full lap ahead. Nick Stover, Shane Logan and Thomas Dunn finished in third, on the same lap as the Garvin team.

Wes Nemec won the Ironman class in 25th overall, setting some lap times along the way that would have been competitive in any class. He was never fully free of second place Austin Eddy, and the two forced each other to push all the way to the finish. They both completed 35 laps. Two of the most amazing rides came from Travis Longfellow and 13 year-old Tony Nolan. They both rode the mini Ironman class and completed 28 and 27 laps, respectively. By far, the most successful mini team was Caiden Fenstermaker, Greg Fenstermaker and Barry Johnson, who finished in 22nd overall.

For full results, go to www.glenhelen.com.