10 GREATEST MX BIKES OF ALL TIME

Light up your cigar, lean back and prepare to do the impossible. The 10 Greatest MX Bike list is all about comparing the incomparable. Just like talking the baseball stats of Barry Bonds, Babe Ruth and Alex Rodriguez, we’re pitting the best MX bikes of all time against each other. Motocross is a technology-driven sport, so it’s obvious that more recent bikes have the advantage in a head-to-head race, but this is more about greatness than lap times. Our panel of experts compared the bikes of the last 50 years based on four criteria:

Here’s what the editors at Dirt Bike Magazine said. 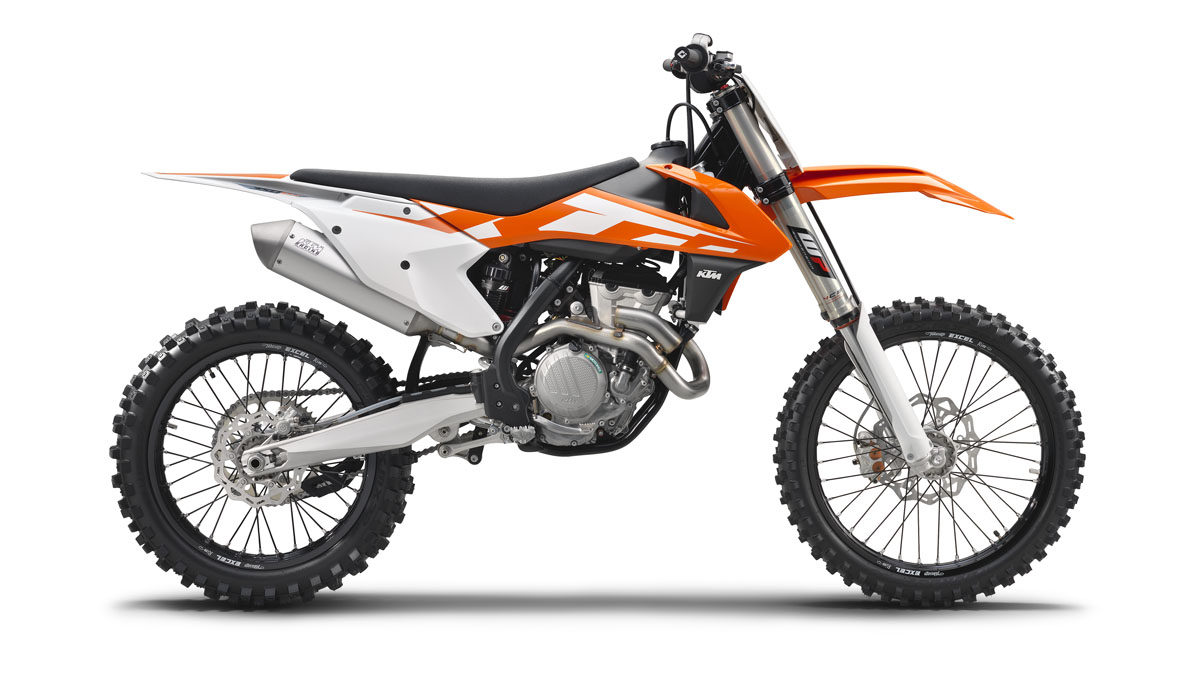 The KTM 350 is the only current bike on our list for good reason: it’s the people’s motorcycle. While MX champions like Ryan Dungey and even Tony Cairoli now ride full-size 450s, the 350 remains the bike for the common man. The KTM 350, along with its blood brother the Husqvarna FC350, appeals to the rank-and-file rider who doesn’t want to deal with 60 horsepower. The 350s have steadily improved over their lifespan and are currently better than ever.

Dominance: ♥♥ It has no class to dominate. And it has to share 350 honors with its sibling from Husky.

Importance: ♥♥♥ It’s important to the people who ride them, but its Pro racing success has been limited to Europe. 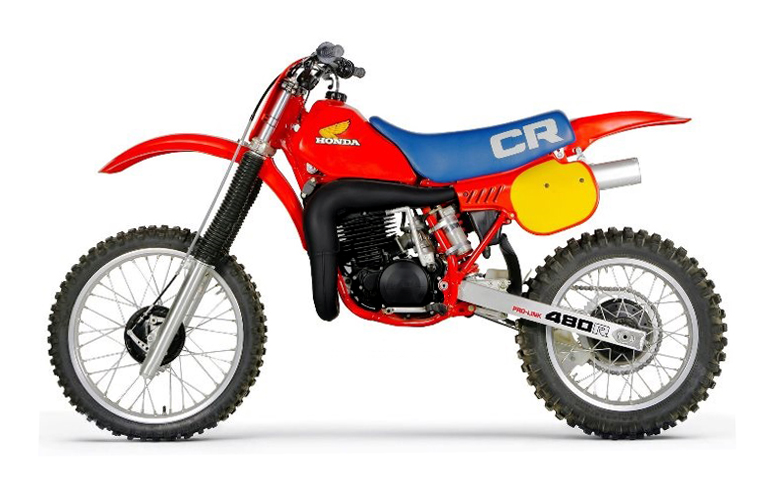 This bike existed in a brief transition period in the history of the Open class two-stroke. Each year, horsepower increased until the class was filled with bikes that were too big and too powerful The 480 arrived before that happened. It was in Honda’s line-up in 1982 and 1983, and of those two bikes, the ‘83 was the bike that earned the most love. It was a left-side kick-start model with drum brakes, but it’s still coveted among evolution-class racers.

Dominance: ♥♥♥ The Honda wasn’t the best Open two-stroke, just the best from Japan.

Reliability: ♥♥♥♥ The big Honda could eat a pound of dirt without losing power.

Importance: ♥♥♥♥ If Honda had stuck with this philosophy, the Open class would still be alive today. 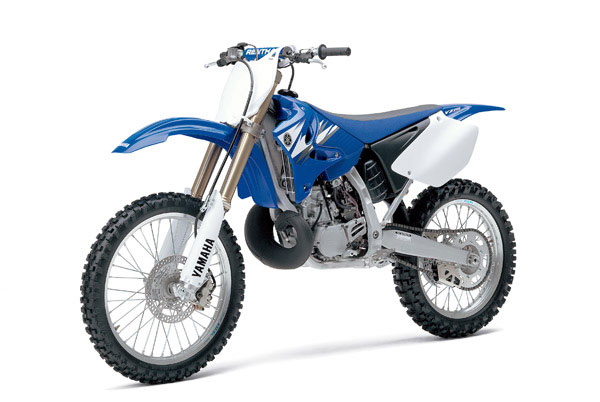 Today’s Yamaha YZ250 two-stroke is an excellent machine, but it’s only a fork and bodywork away from being the same bike it was over 10 years ago. It remains the sole Japanese two-stroke, and one of the most-loved bikes in the world. We chose the 2007 model because that year the other Japanese makers left the class, for the most part. Yamaha had already been the top-rated bike of all the two-strokes, even when the class was full. The Yamaha’s frame and motor actually go back to 2005.

Dominance: ♥♥♥ It was the best 250 motocross bike of its day, and still handles better than more modern bikes from Austria and Italy.

Longevity: ♥♥♥♥♥ The same basic bike has been in production for 11 years.

Reliability: ♥♥♥♥♥ It’s not unbreakable, but very close. And cheap to fix if it does break.

Importance: ♥♥♥ Other Japanese companies don’t think the 250 two-stroke is important enough to offer. We disagree.

For more on the history of the Yamaha YZ250, click here. 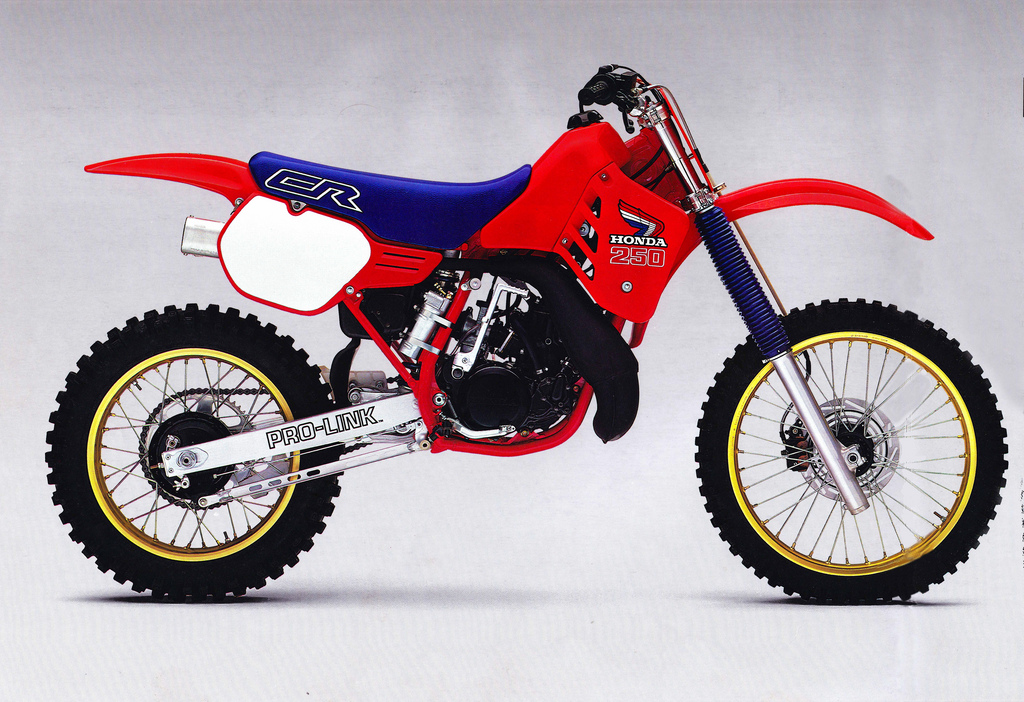 In 1986, Honda was in the Zone. Its racing team, its works bikes and its production bikes were all excellent. In 1986, Honda had a new 250 motor with a much-improved power valve. It also  had a front disc brake and a cartridge fork. It got a rear disc the next year, making that model even better, but by then, Yamaha and Suzuki had started to catch up.

Dominance: ♥♥♥♥♥ It was the best motocross bike of its day.

Reliability: ♥♥♥♥ By this time, Honda had most of its early bugs worked out.

Importance: ♥♥♥ Honda raised the tide in motocross for everyone in the ’80s.

For more on the history of the Honda CR250, click here. 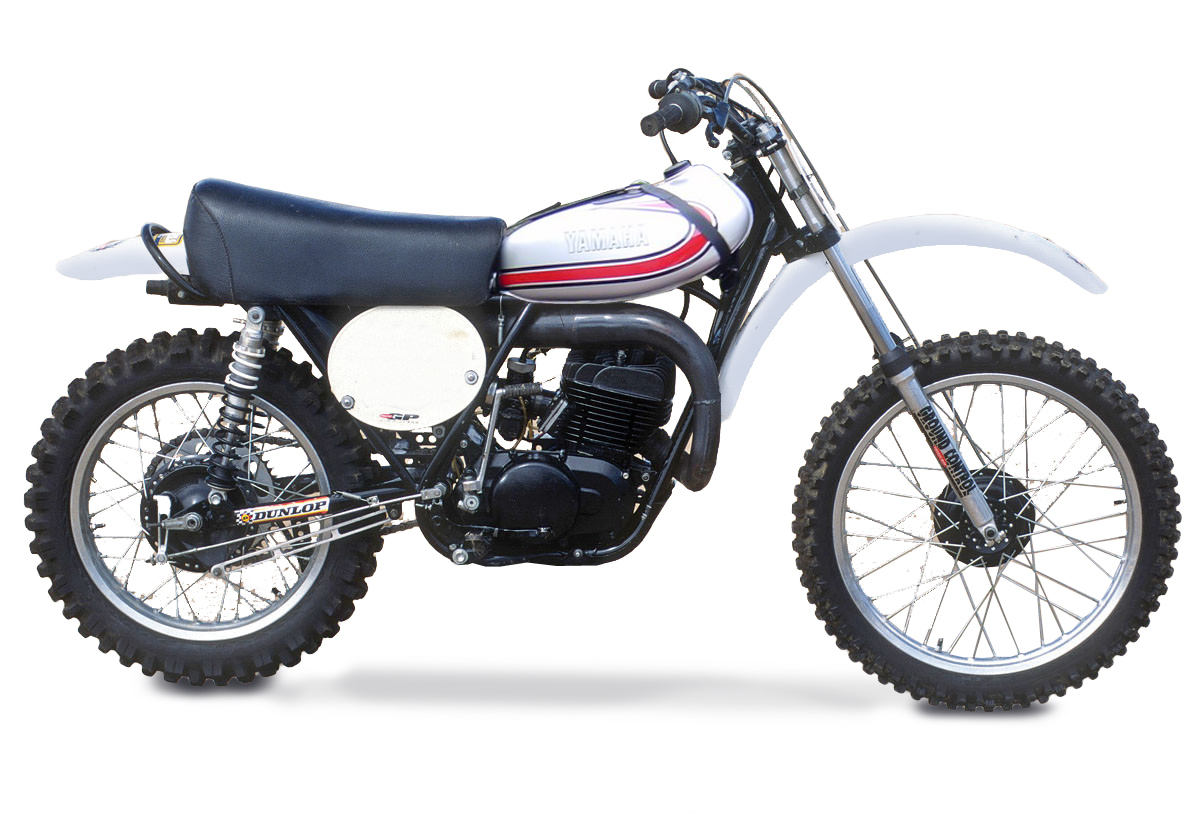 To this day, the one bike that vintage racers long for the most is the first Yamaha YZ360A. It was a virtual clone of the works bikes that were racing in Europe, and there were very few made. The fuel tank was an alloy work of art, held on with nylon straps. The 1975 model was the first Monoshock, and was also brilliant. By 1976, the party was over, though.

Dominance: ♥♥♥♥♥ This was the best Open MX bike from Japan, but Maico, Husky and Bultaco had serious offerings and were on top of the MX game back then.

Longevity: ♥ Within a short time, the YZ360 had been surpassed.

Reliability: ♥♥♥ Considering how light the YZ was, it was incredibly well built. Nothing from Europe was as bulletproof.

Importance: ♥♥♥♥ If only Yamaha made more YZ360, it might have changed the face of MX.

For more on the history of Yamaha’s Open bikes, click here. 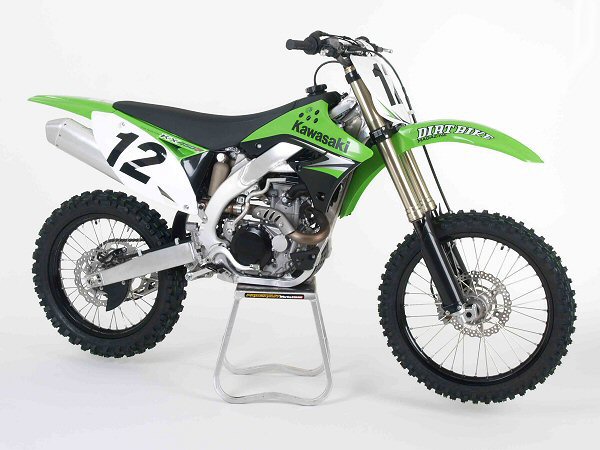 Kawasaki has had a long run on top with this bike. When all the Japanese bikes went to fuel-injection, Kawasaki did the best job, setting the stage for a long period when it was the bike to beat. The 2009 model was good, but it got got slightly better the next year and the next year without dramatic change.

Dominance: ♥♥♥ In the modern era, no single manufacturer can truly dominate. But Kawasaki remains near the top.

Reliability:♥♥♥ There were a few piston issues in the earlier years, but Kawasaki cured most of its ills. 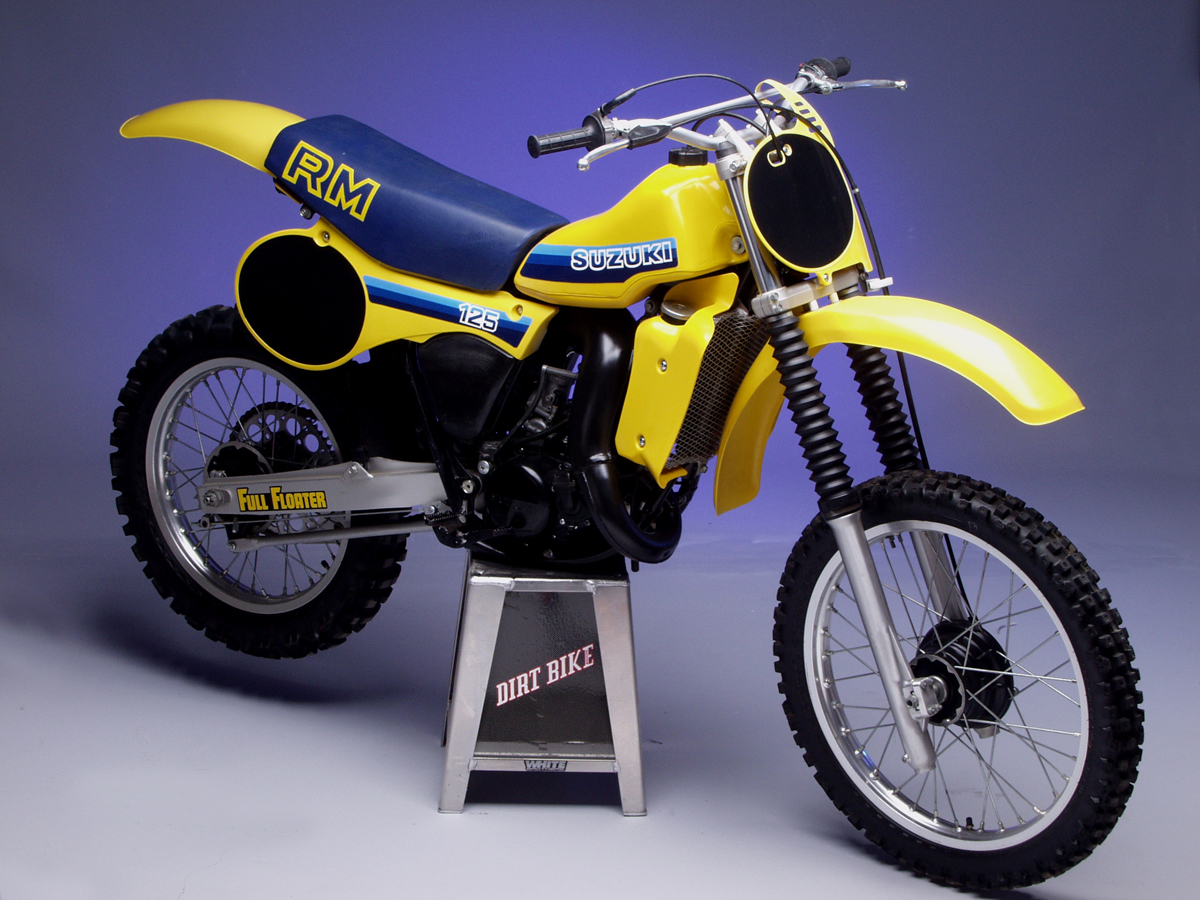 It was a bike from the future. In 1981, The liquid-cooled Suzuki RM125 arrived and stunned the world. Works bikes had come out with liquid-cooling earlier, but Suzuki did it right, and the bike was lighter, faster and, with the Full-Floater rear shock, much better suspended than anything in the world. As was the case in this period, the RM’s period of dominance was short-lived. The next year, Honda, Yamaha and Kawasaki caught up. It’s worthy to note that the 1982 Suzuki RM250 (a virtual clone to the ’81 125) dominated that class in the much same fashion

Dominance: ♥♥♥♥♥ In 1981, nothing was better, especially in the suspension department.

Longevity: ♥♥ As was often the case with bikes of this period, the RM’s reign was brief.

Reliability: ♥♥♥♥ There were a few issues that Suzuki handled promptly

Importance: ♥♥♥ Suzuki made everyone work on suspension a little harder.

For more on the history of the Suzuki RM250, click here. Maico was always ahead of the curve in the early years of motocross. Even as far back as 1974, Maico was first on deck with long-travel suspension. But clearly, the high-point for the German company was the 1981 Maico 490 Mega 2. It handled better than anything of the day, and the motor was perfection. Ironically, the 490 was probably responsible for the downfall of the Open class. Honda and Yamaha responded by making their motors more powerful, but never duplicated the excellent Maico power delivery. In 1982, the Maico motor was stuffed into an overweight single-shock frame and the magic was gone. Ironically, the ‘81 Maico was still the best in class into the mid-’80s, after Maico itself had vanished.

Longevity: ♥♥♥ There was one truly excellent year for the 490, but it was so good it was competitive for a long time. That was unheard-of in 1981.

Reliability: ♥♥♥♥ If you were a Maico guy, you knew how to make it sing.

Importance: ♥♥♥ The end of Maico was right around the corner in 1981. That was the beginning of the end for the 500 class. 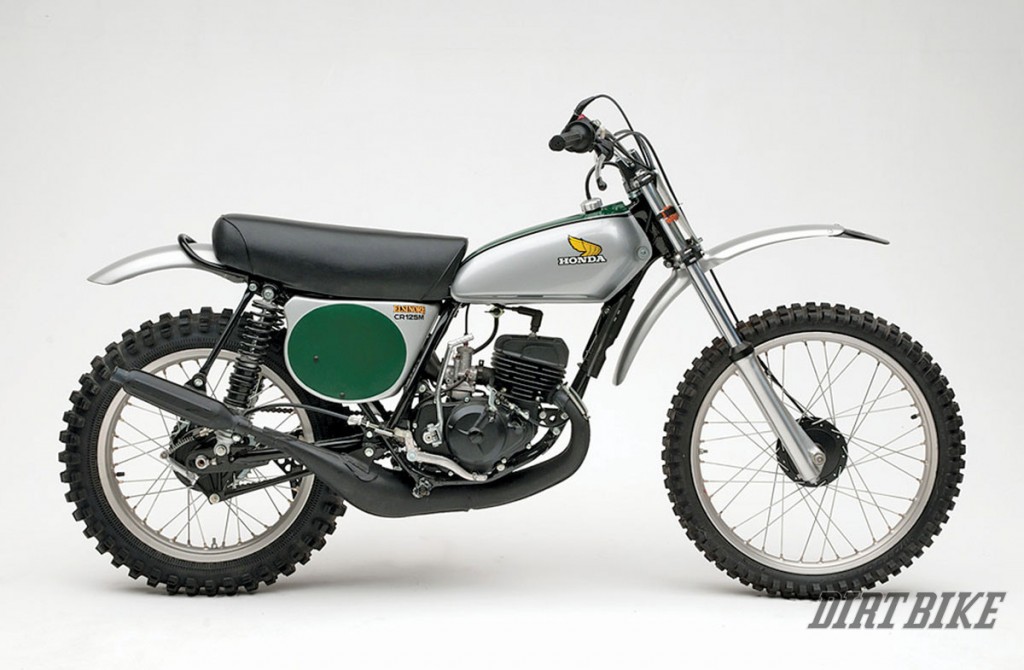 This bike earns its place on the list through sheer weight of numbers. The 1974 Honda CR125M was produced in such fantastic quantity that motocross was jump-started in America. It was fast, reliable and cheap. The little Honda spelled the beginning of the end for companies like Hodaka and Penton, but it energized a generation of riders. Suzuki, Yamaha, Can-Am and Kawasaki also had 125s that arrived about the same time, so the 125 class came alive. Unfortunately, the Honda also signaled the beginning of a technology race that Honda was unprepared for. Within a single year, the CR125M was obsolete.

Dominance: ♥♥♥♥♥ If the Honda wasn’t the best 125, it didn’t really matter. It won every race because there were so many of them.

Longevity: ♥ By 1975, Suzuki and Yamaha had better bikes, and the CR didn’t change.

Reliability: ♥♥♥♥♥ Transmissions were a weak spot, but the Honda was far more reliable than any of the 125s that came earlier.

Importance: ♥♥♥♥♥ Motocross would not be the same sport it is today if the Honda CR125M had never been.

For more on the Honda CR125M Elsinore, click here. 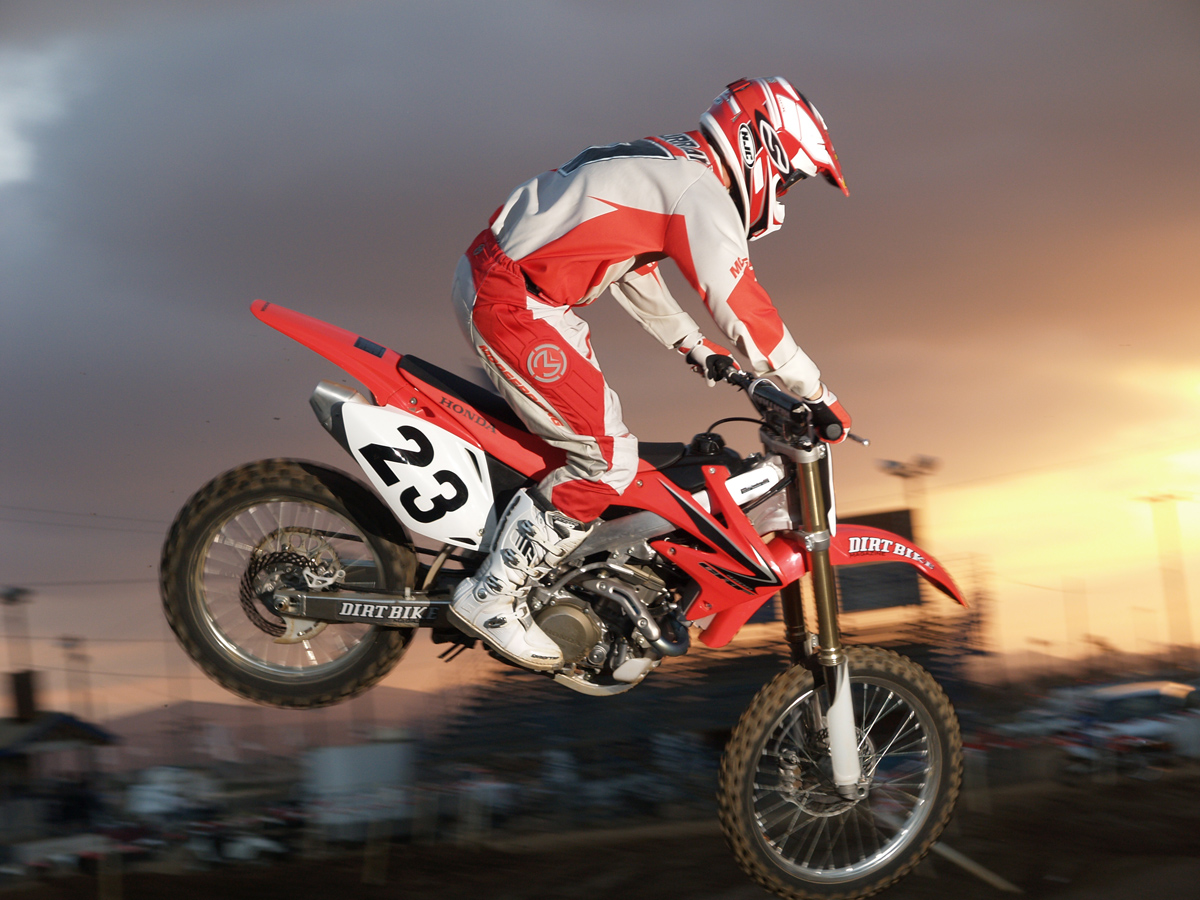 Today, many riders insist that the 2008 Honda CRF450R was the best MX bike that Honda—or anyone—ever made. It was the last Honda 450 to have a carburetor, and the 2009 model that followed was clearly a step backwards. There were actually more 2007 models produced than any dirt bike in Honda’s recent history, and it was very similar to the ‘08. Are current 450s as good? That’s a debate for another day. But the fact remains that the 2008 version was far superior to the other bikes that year, and it remains ubiquitous today.

Reliability: ♥♥♥♥♥ Interestingly enough, the ’08 is more reliable than the current Honda 450.

Importance: ♥♥♥♥ The 2007 Honda 450 was produced in greater numbers than any other motocross bike of the 21st century. That says something.

For more on the history of the Honda CRF450R, click here.